In the February issue of Cook's Illustrated, I spotted a challenge that I was eager to take on:  Chicago-Style Deep-Dish Pizza.  New York City is home to great pizza joints that serve both 'New York Style' and Neapolitan pies.  My favorites, at least so far, include Fascati's in Brooklyn Heights, Motorino in the East Village, and Keste in Greenwich Village.  They all serve mouth-watering pizzas and I usually end up overeating.

Sometimes though, I get in the mood for something heartier--a pizza that is more hefty than floppy.  I've had fantastic experiences with deep dish pizza, most memorably at Pizzeria Due (sister to the original Pizzeria Uno) in Chicago.  I've also eaten some rather lackluster pies that tend to be either overly cheesy or have a wet crust that can't support the heft of the ingredients. 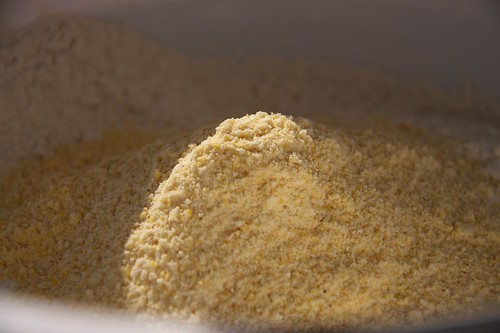 Cooks Illustrated is well known for their thoroughly researched recipes.  The chef behind the recipe I used experimented with over 100 deep dish pizzas!  I have neither the funds nor the patience for that!

The author goes into a detailed discussion about crust and what makes a Chicago pizza authentic.  This winning Cooks Illustrated recipe aims for a crust that's almost like a flaky, rich biscuit.  And in order to be truly 'Chicago', the dough must contain cornmeal.

About halfway through my dough-making, I thought I was going to be forced to abandon ship.  While the dough was rising, it remained incredibly sticky, so much so that it got wrapped around my rolling pin and wouldn't come off.  Even though the recipe said to roll the dough on a clean surface, I decided to spread a thick layer of flour on the surface and on the rolling pin, which did the trick. 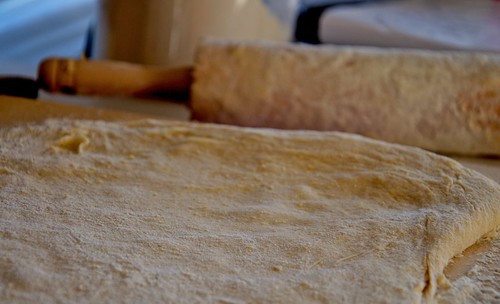 In the end, the flavor and dough consistency was pretty close to how America's Test Kitchen envisioned it...a rich tomato flavor, melted cheese, and a flaky, cornmealy crust.   This was my first experience making my own dough (I usually rely on Dufour) and I'm excited to continue to learn the intricacies of breadmaking. 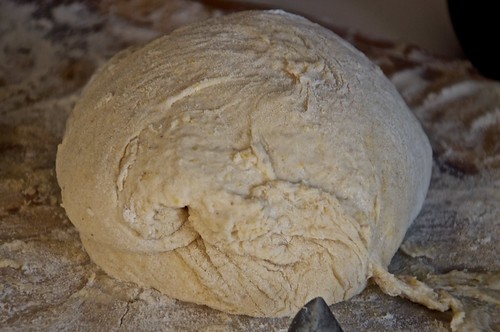 Several specifics about this recipe:

a)  Be careful about over kneading!  The recipe says to use a stand mixer.  I only own a hand mixer, which I did use, but I believe my sticky dough stemmed from overmixing.  I think that next time I would mix the ingredients briefly with the mixer and then knead with my hands.

b)  Freshly shredded mozzarella is recommended because it tends to form a more consistent barrier between the dough and sauce.

c)  You can simmer the sauce for even longer than recommended:  the flavor becomes deeper and the sauce thicker.

d)  I forgot the dried oregano in the sauce but, surprisingly, I didn't feel like the sauce really needed it.

e)  After the pizza has baked, let it sit longer than the recommended 10 minutes.  We found that on our second serving, the pizza had hardened a bit and was much easier to cut into neat pieces. 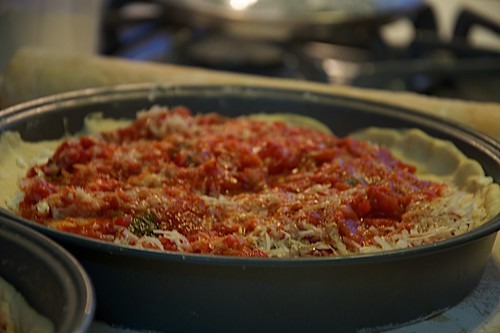 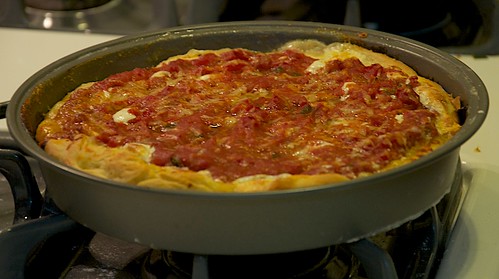 1. FOR THE DOUGH: Mix flour, cornmeal, salt, sugar, and yeast in bowl of stand mixer fitted with dough hook on low speed until incorporated, about 1 minute. Add water and melted butter and mix on low speed until fully combined, 1 to 2 minutes, scraping sides and bottom of bowl occasionally. Increase speed to medium and knead until dough is glossy and smooth and pulls away from sides of bowl, 4 to 5 minutes. (Dough will only pull away from sides while mixer is on. When mixer is off, dough will fall back to sides.)

3. FOR THE SAUCE: While dough rises, heat butter in medium saucepan over medium heat until melted. Add onion, oregano, and 1/2 teaspoon salt; cook, stirring occasionally, until liquid has evaporated and onion is golden brown, about 5 minutes. Add garlic and cook until fragrant, about 30 seconds. Stir in tomatoes and sugar, increase heat to high, and bring to simmer. Lower heat to medium-low and simmer until reduced to 2 1/2 cups, 25 to 30 minutes. Off heat, stir in basil and oil, then season with salt and pepper.

4. TO LAMINATE THE DOUGH: Adjust oven rack to lower position and heat oven to 425 degrees. Using rubber spatula, turn dough out onto dry work surface and roll into 15- by 12-inch rec-tangle. Using offset spatula, spread softened butter over surface of dough, leaving 1/2-inch border along edges. Starting at short end, roll dough into tight cylinder. With seam side down, flatten cylinder into 18- by 4-inch rectangle. Cut rectangle in half crosswise. Working with 1 half, fold into thirds like business letter; pinch seams together to form ball. Repeat with remaining half. Return balls to oiled bowl, cover tightly with plastic wrap, and let rise in refrigerator until nearly doubled in volume, 40 to 50 minutes.

5. Coat two 9-inch round cake pans with 2 tablespoons olive oil each. Transfer 1 dough ball to dry work surface and roll out into 13-inch disk about 1/4 inch thick. Transfer dough to pan by rolling dough loosely around rolling pin and unrolling into pan. Lightly press dough into pan, working into corners and 1 inch up sides. If dough resists stretching, let it relax 5 minutes before trying again. Repeat with remaining dough ball.

6. For each pizza, sprinkle 2 cups mozzarella evenly over surface of dough. Spread 1 1/4 cups tomato sauce over cheese and sprinkle 2 tablespoons Parmesan over sauce. Bake until crust is golden brown, 20 to 30 minutes. Remove pizza from oven and let rest 10 minutes before slicing and serving.