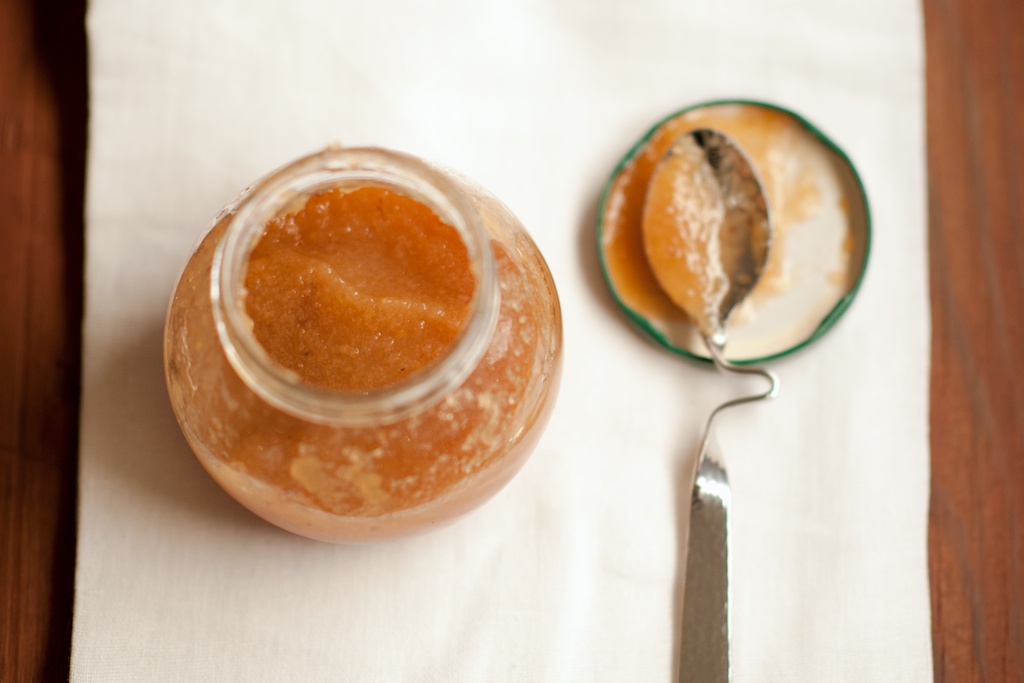 I knew I wanted to tackle one more canning and preserving project this Winter before we move. And I wanted my canning project to meet these stipulations:

a) It needed to feature a product readily available at the farmers' market;

b) It needed to be something that could be used in more than one way;

c) It needed to be something I'd want to eat fairly constantly for the next few months.

Remembering the relative ease of making apple butter, and in fact still enjoying the remaining butter on my morning toast, my mind quickly turned to its sibling, pear butter. I can't recall eating pear butter before, but I guessed the process and taste would be similar to apple butter. 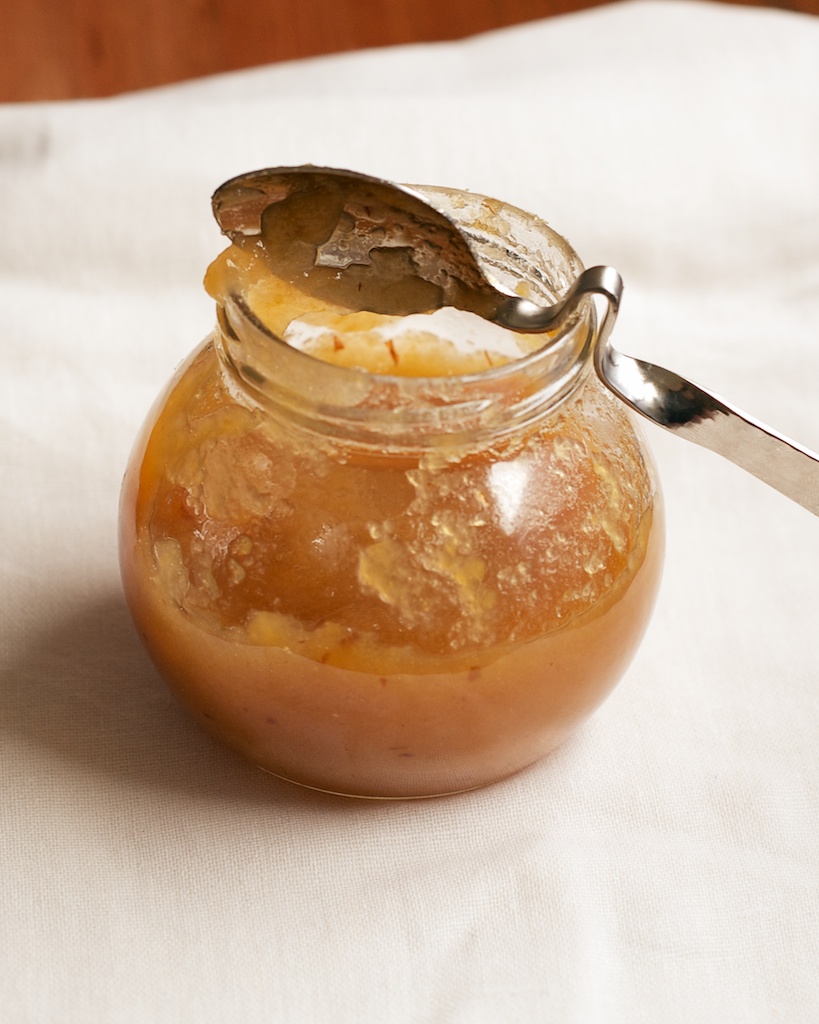 My decision made, I quickly found a recipe in Put 'Em Up!, gathered the requisite pears from the Greenmarket and began the prep work. On paper, the process looks remarkably similar to that of making apple butter. In my kitchen, the timing was much different.

After chopping the eight pounds of pears and putting them in a medium sized pan, I laughed and switched them to a much more appropriate stockpot (see the comparison picture)!

Pears do not yield easily. Though the recipe implied that simmering would take 20-30 minutes, in reality, I simmered the pears for close to an hour. The mixture was so hot that each splatter stung my skin, yet the pears and their skin remained firmly intact. Because the pears took so long to initially break down, I made an educated guess that the time from pear puree to pear butter would also double and queued up a podcast of "This American Life". I should have queued up two podcasts! The pear butter simmered and simmered, taking nearly an hour and a half to reach its final rich orange-hued color. 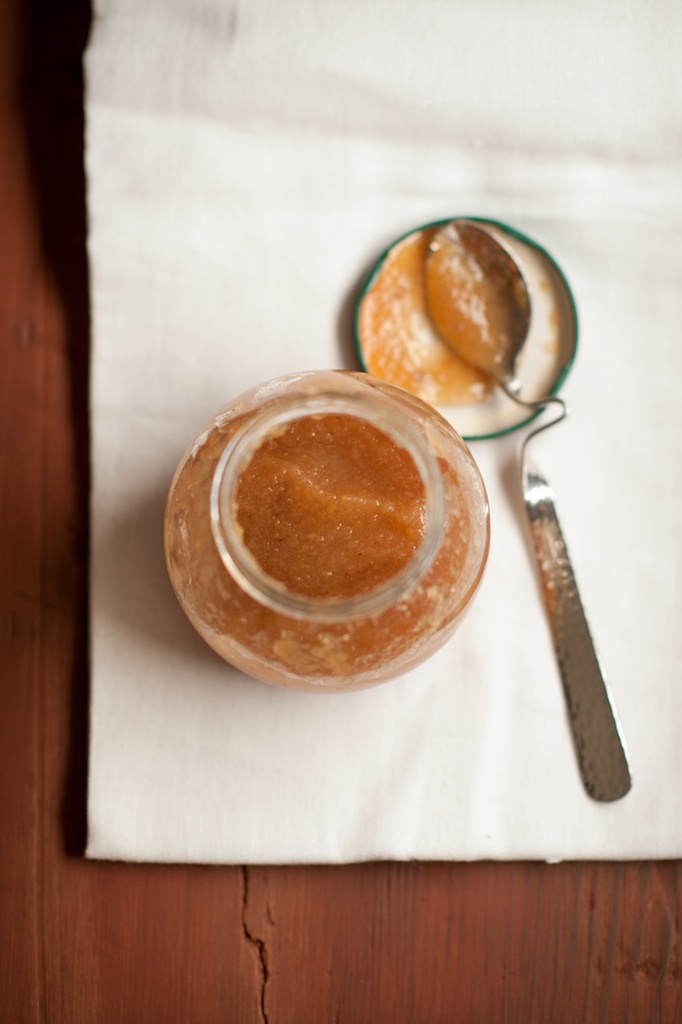 It doesn't always work out this way, but in the pear butter's case, the splatters and time spent stirring were the last things on my mind after I ate a spoonful. This pear butter is comforting and hearty. Besides toast, I anticipate using it on ice cream and biscuits. If you cook meat at home, it can even be served as a pseudo-compote. Just remember: when you do make this, allot enough time for several podcasts or repeat listenings of your favorite album. 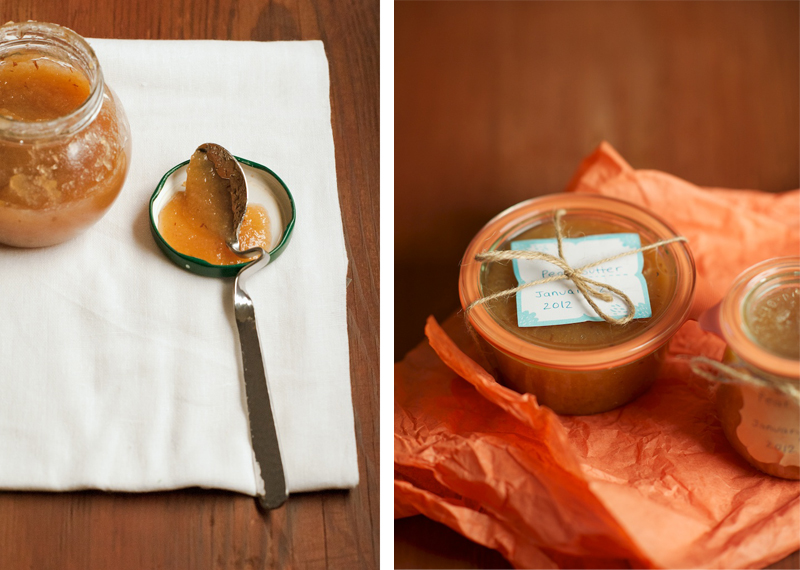 Recipe Adapted from Put 'Em Up!

1) Pour the cider and lemon juice into a large pot, such a stockpot.

2) Stem and quarter the pears. Put these slices into the pot and bring the entire mixture to a boil. Reduce the heat and simmer until the pears are quite soft, between 40 minutes to an hour.

3) Let the pears cool some and then, in batches, ladle them into a food mill to remove the seeds and skin. Return this puree to the same pot and add the sugar, honey, cinnamon, and nutmeg.

4) Simmer this mixture over medium low heat until thickened. This will take between 40 minutes and an hour. Stir often to prevent the base from burning. Your butter is ready when the mixture is thick and a sloop on a plate doesn't immediately weep juice around the perimeter.

Using a stainless steel spoon to transfer the jam into its storage containers. Let cool on the counter before putting into the refrigerator. Keep in the refrigerator for up to 3 weeks.

Ladle into oven sterilized jars, leaving 1/4 inch of headspace. (To sterilize your jars in the oven, heat your oven to 250 degrees before placing your jars and lids onto cookie sheets. Keep in the oven for at least 30 minutes, but longer is fine, too.)

Remove the jars from the oven keeping them on their sheet(s). Put the sheet on a wire rack and cool them over night. They will seal as they cool.