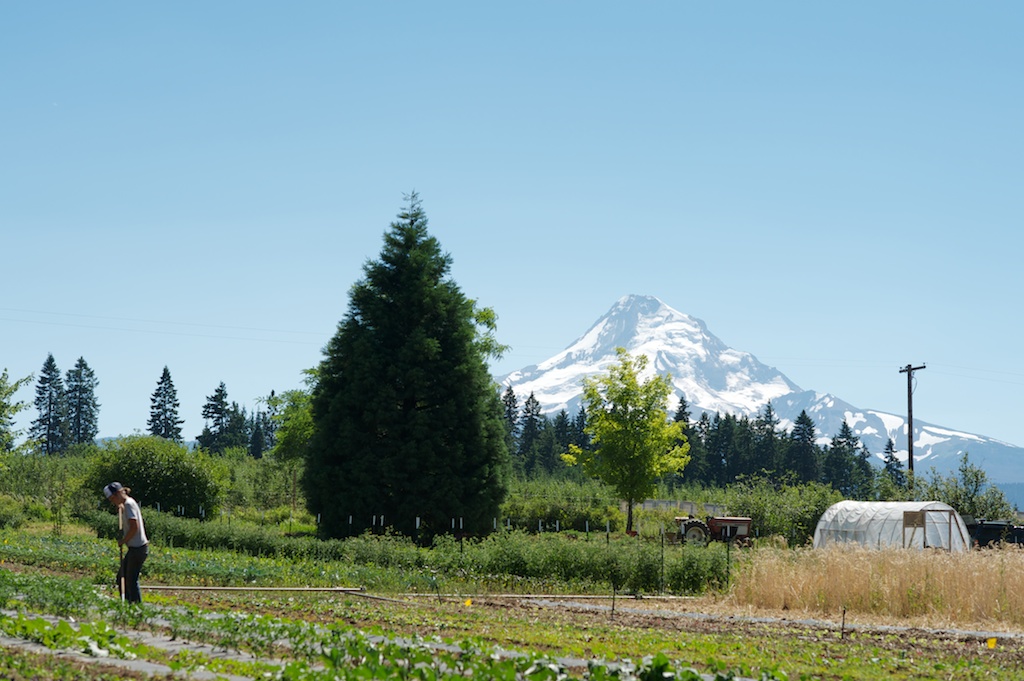 Few words are as visually evocative, or as illustrative of their definition, as “tumbleweed”. Tumbleweed refers to the above-ground part of a plant that separates from its roots and literally tumbles away, swept up by the wind. As it bounces along, the tumbleweed gathers dirt and parts of other plants from the different environments it rolls through, all the while spreading the original plant’s seeds and spores. It’s impossible to know how long the circular mass has been tumbling, what it originally looked like, or even where it will finally land. 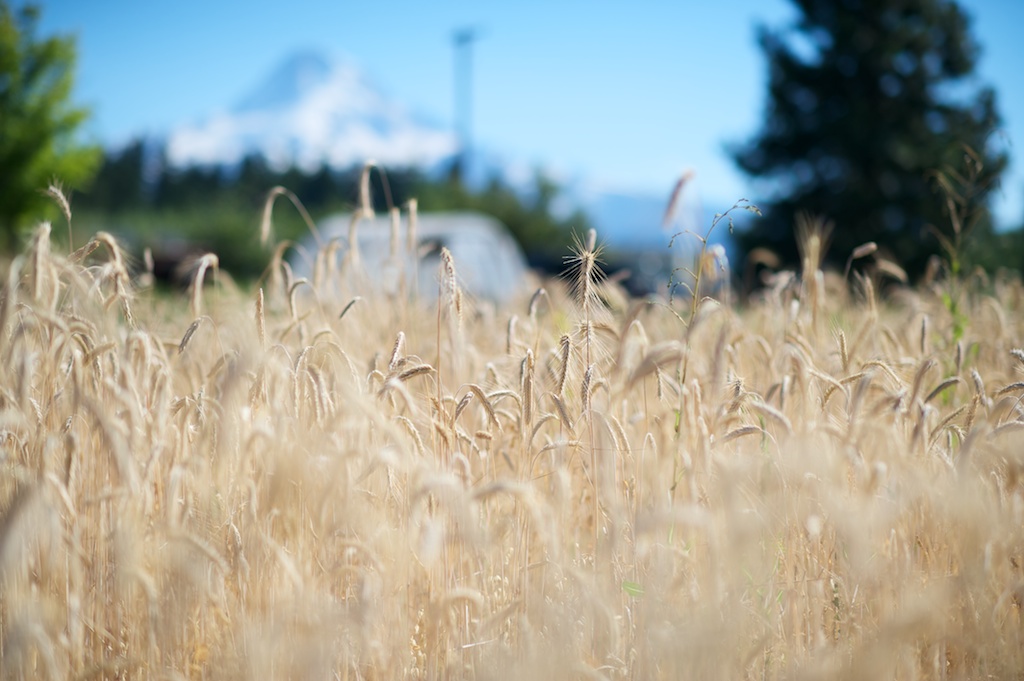 Andrea and Taylor Bemis can easily relate to these drifting plants. For most of their lives together, they’ve tumbled from state to state, seeking adventures and new experiences. After meeting at a Montana ranch in 2004, they’ve lived in Colorado, New York City, Maine, Oregon, and Massachusetts – sometimes separately, more often together. In 2009, they settled in Bend, an outdoor-focused town in Central Oregon’s high desert. Bend is nestled along the Deschutes River, and framed by the Three Sisters Mountain Range and Mt. Bachelor. Along with all of the snow and water sports the mountains and river are privy to, Bend has miles of trails for runners, hikers, and mountain bikers.

To support their outdoor interests, Andrea worked at a local running store and Taylor tended bar and coached a ski team. When they weren’t working, they pursued the envy-inducing Bend lifestyle of skiing, running, and hiking. On one of these hikes, Andrea and Taylor surprised each other by each making a mid-trail confession to a desire to do something in their lives that “meant more”. While the freedom that comes from being outdoors certainly played a role in their desire for change, another impetus came in a less dramatic form: blueberries. Earlier that day, they’d received a package of blueberries from Taylor’s father; the blueberries came from Hutchins Farm, which is owned by Taylor’s father and was the first certified organic farm in Massachusetts. 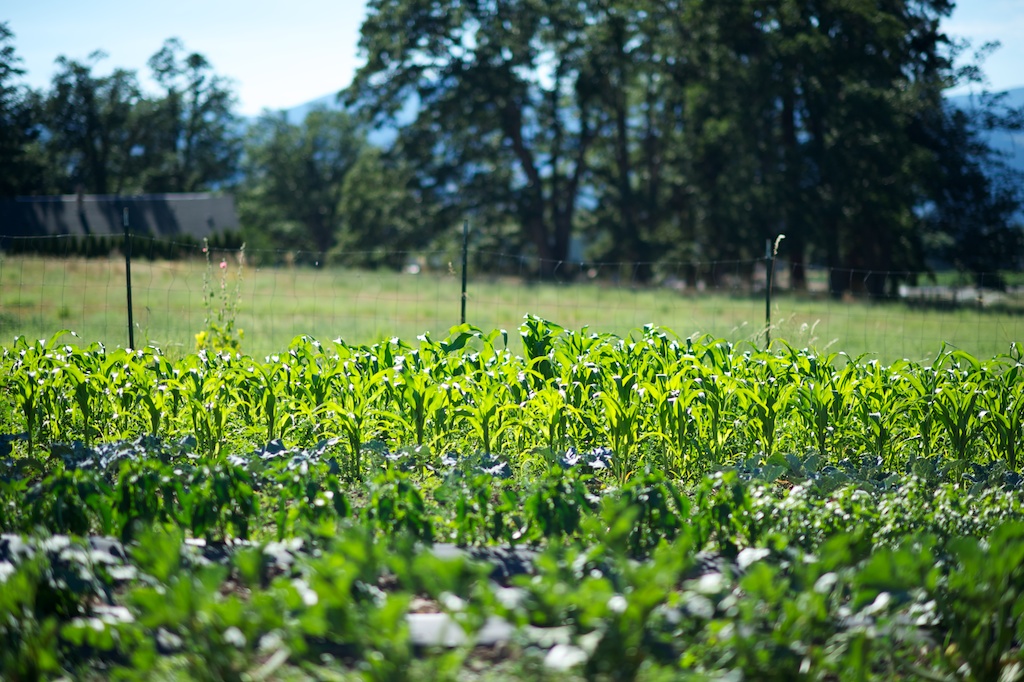 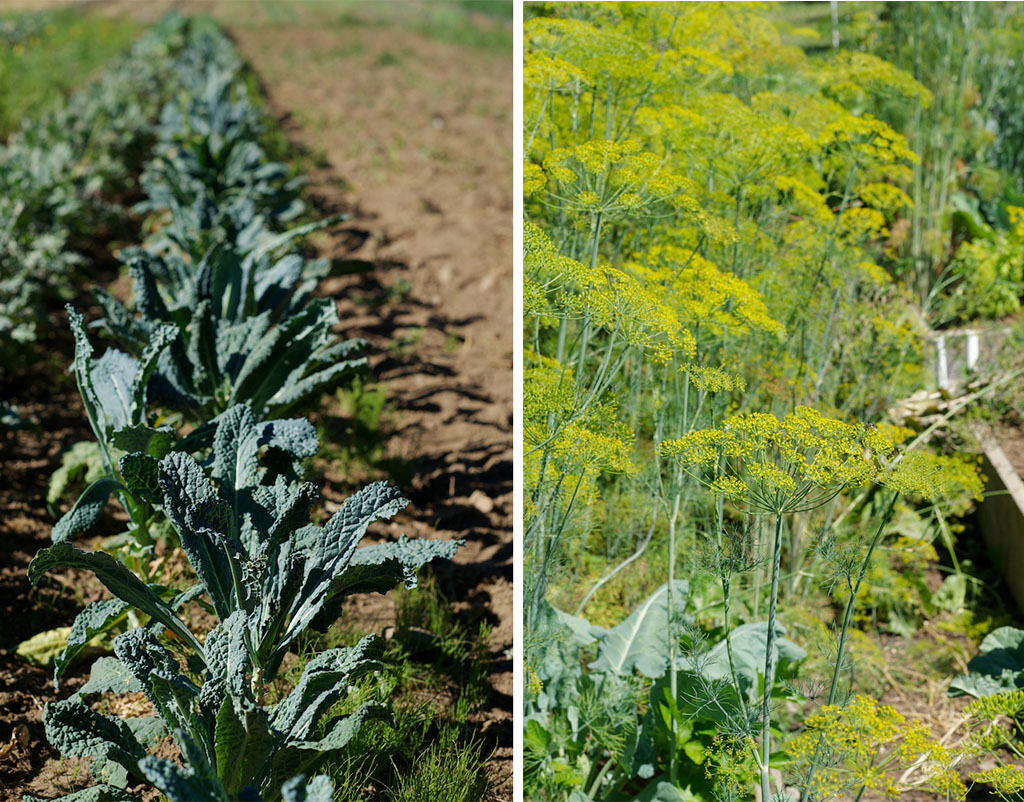 Taylor grew up on Hutchins Farm, but the more he skied and traveled, the greater pull he felt to learn his father’s trade. While Andrea had no farming experience, her prodigious cooking had piqued an interest in the provenance of the food she was using, and how those ingredients were grown. Though the allure of Bend’s lifestyle can be hard to resist, Andrea and Taylor realized that they wished to go in a new direction together. They moved to Massachusetts in March of 2010, ready to learn all aspects of farming – and having only a slim idea of the amount of work for which they’d signed themselves up.

Three and a half years later, they’re in the middle of their first official season as the owners and farmers of Parkdale based, and aptly named, Tumbleweed Farm. And for once, these drifters are done moving. “I think it’s the first time in our lives where we’re not itchy to do something else,” Andrea says assuredly. Taylor and Andrea have collected their wide range of experiences – from skiing and running, to customer service, to working as caretakers of Ralph Waldo Emerson’s house – and applied their knowledge, flexibility, and easy-going personalities to agriculture. 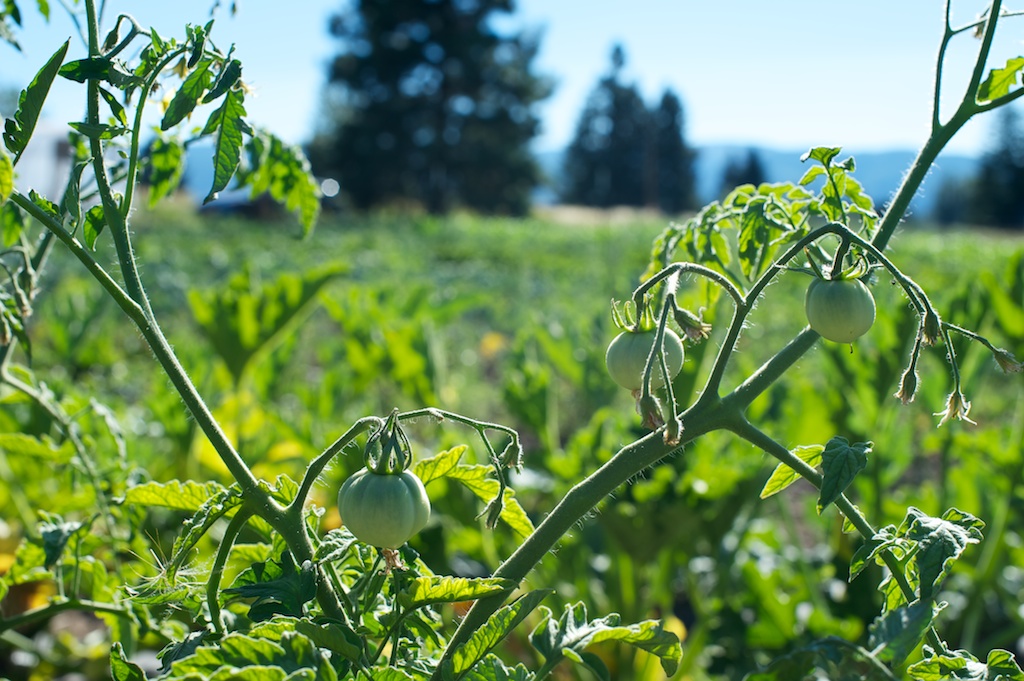 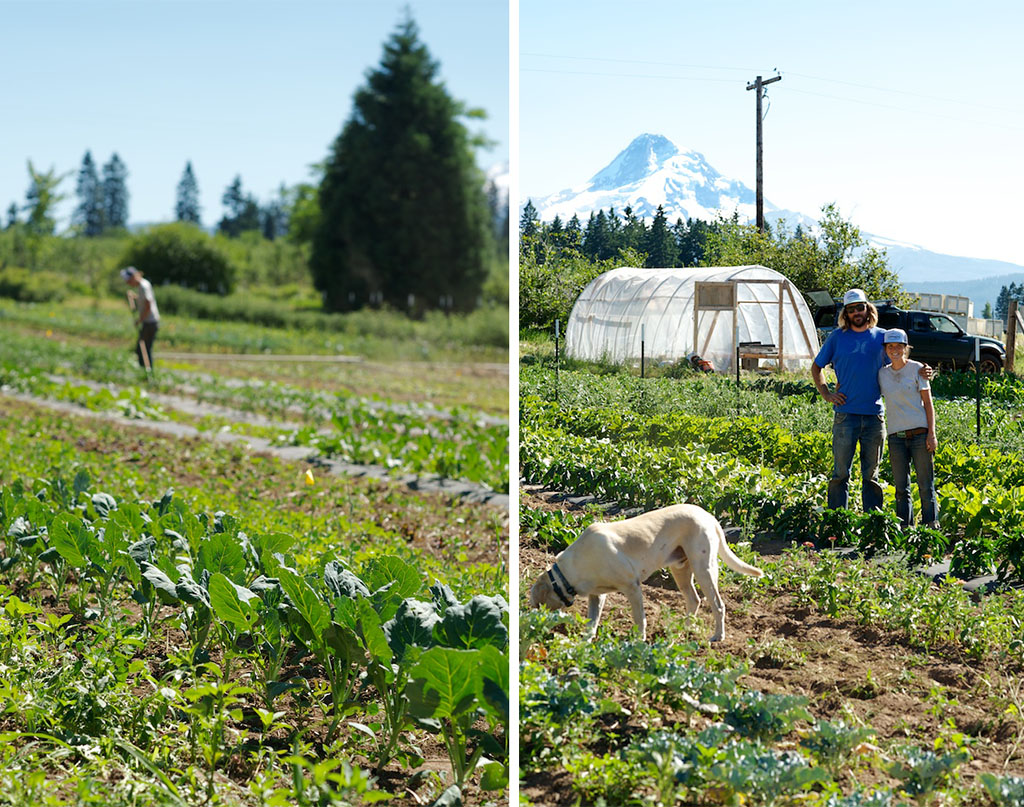 When Andrea and Taylor felt ready to strike out on their own, they immediately set their sights back on Oregon. Andrea’s family lives in Portland, and after three years away from the mountains, they didn’t consider many places besides the Hood River area. They found their acreage through a website that matches landowners with prospective farmers. Although they had lined up three different properties to visit, they cancelled the other two meetings after seeing the future home of Tumbleweed Farm. For $3500 a year, Andrea and Taylor can simultaneously farm and stare up at Mt. Hood looming over their land. The rental price includes irrigation and irrigation equipment, as well as very supportive landlords, who are “pumped for us to farm their land,” Taylor explains.

Tumbleweed broke ground in October of 2012, with Andrea and Taylor planting garlic they’d brought with them from Hutchins Farm. They’ve modeled their one acre Tumbleweed Farm as a smaller “Hutchins West”. Taylor shares that they’re basically following the ”same routine, divided by 30.” Or, he laughs, ”Probably, divided by 100. We have a similar planting schedule.” Hutchins and Tumbleweed grow comparable organic vegetables (the whole gamut, from zucchini to collard greens to swiss chard to tomatoes), though Andrea is quick to point out that Hutchins’ acre of blueberries is as big as their entire farm. This huge difference in acreage initially skewed their perception of farming this smaller plot by themselves. After working with a large team on Hutchins’ 40 acres, when they first saw Tumbleweed’s piece of land, Andrea jokes that they thought “piece of cake; this is nothing! And now, we’re kind of getting our butts kicked.” 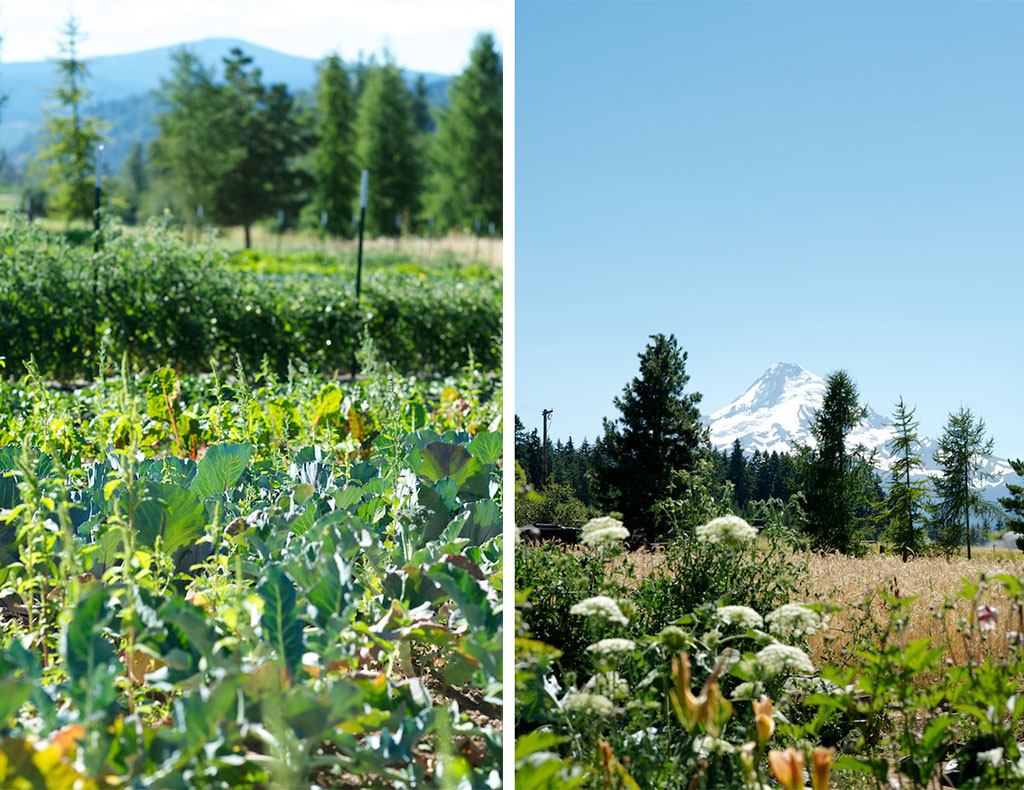 While Andrea and Taylor miss the camaraderie of working with a large group, they enjoy setting their own schedules (“if we’re hungry at 10 am, we’ll eat at 10 am”), and the peace that comes from working together. Taylor and Andrea are as outwardly easygoing a farming couple as you could find. When I arrived at their farm, Taylor was rototilling and Andrea was weeding the beds with a hoe. I noticed Taylor carrying around a can of Caldera beer, and casually remarked that I’d just enjoyed the same beer the previous night. “You want one?”, Taylor asked, as he led me to their stash of beer, nestled in a shaded irrigation run-off hole. Beer was an easy topic of conversation – Taylor tends bar three days a week at Solera Brewery and Andrea, who has turned her love of cooking into a blog featuring self-created farm-fresh recipes, frequently ends her recipe posts with an invitation for the reader to “pour yourself an ice cold beer and dig in”. (If you’re curious, the couple’s favorite beer is Solera’s Hedonist IPA, which you’ll have to go to Parkdale to enjoy, as they don’t currently bottle.) 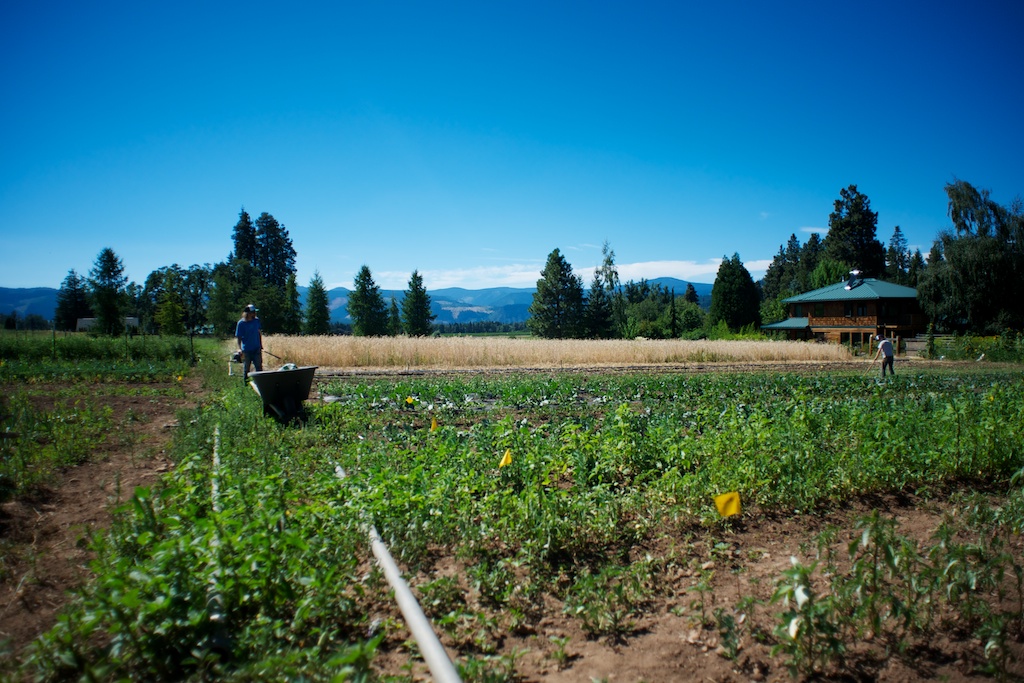 Starting a farm from scratch is a massive undertaking. Andrea was quick to admit that if they hadn’t interned at Hutchins, they wouldn’t be surviving this first year. “If we hadn’t had that experience, and had just decided to become farmers, we would have failed. There are people that do that, but we definitely needed a crash course on someone else’s lot,” she explains. They’ve had flea beetles ravage many of their plants and completely destroy their arugula. Many days, their tasks revolve around “mind-numbing and monotonous weeding.” And there was a stretch where Taylor was closing the bar on Friday nights at 1 am, waking up at 4 am to harvest for Saturday’s market, working the market, and then going back to the bar to close it again. The couple survived that schedule for a month and a half before dropping the market and ending one of those night shifts. 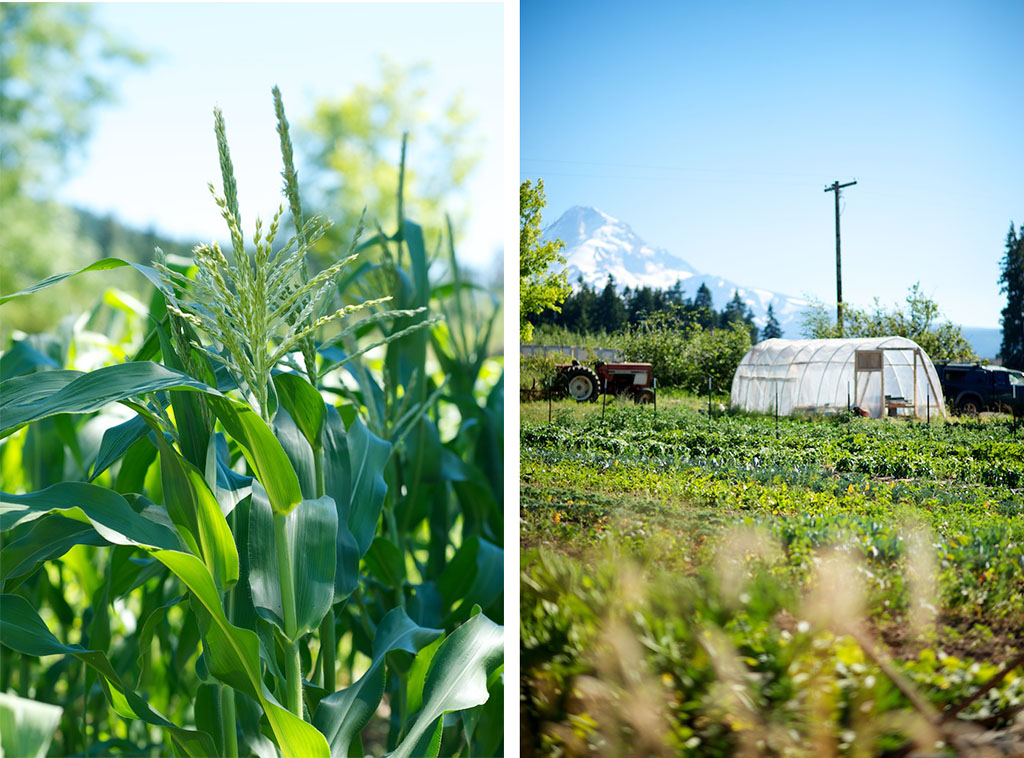 Whatever spare time they have either goes to cooking with their produce or sleeping. They laughed when they remembered that a few months ago it smelled like there was a dead body in their basement, but they didn’t have time to investigate, because “any spare moment [we have], we need to be sleeping!” And while they wish they had time to enjoy Hood River’s numerous outdoor activities, they’re focused on surviving this first season and laying ground for the next season. If something doesn’t work, their general attitude is – okay, how can we apply that lesson to next year?

Although they plan to rent for another season or two, they’ve started to look for land to own, a move that will complete the transition of giving Tumbleweed Farm, and its farmers, permanent roots. Once they own, they plan to diversify their farm to include animals and perennial crops, and to grow their CSA membership beyond the casual “trial CSA” they’re conducting this year with friends and family in Portland. For 2013, their main goal is to break even. “If we can start out next year with all of our equipment paid for and the greenhouse paid for, our costs next year will be small. We’ll have customers, we’ll know what we’re doing more. So far we’re on track to break even,” Taylor shares. 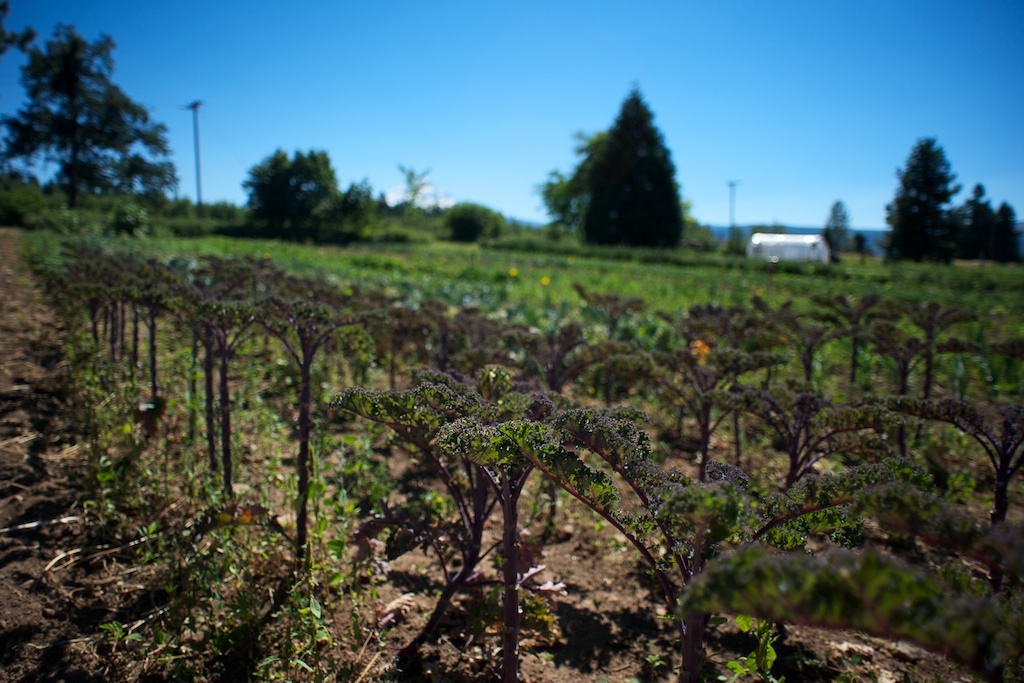 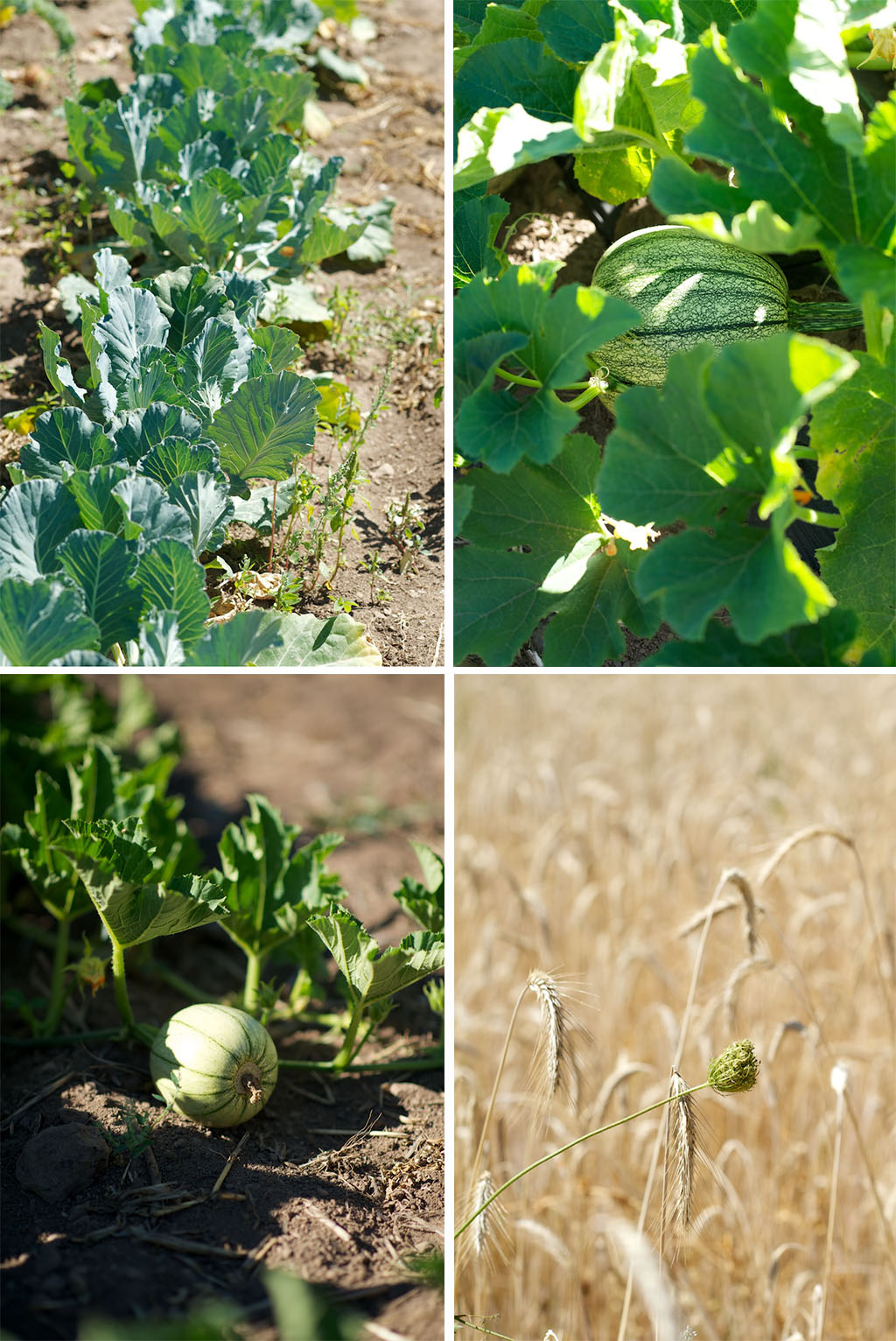 Andrea’s original impetus for wanting to farm was her interest in food, an interest that has only deepened as she continues to grow food. In the early iterations of her blog, her recipes weren’t always seasonal and certainly weren’t created from food she’d grown herself. She’s transformed into someone who cooks nearly everyday, with recipe inspiration coming to her “mid-heatstroke”. And in this more rooted life, Taylor can farm, tend bar, and ski (even if it means sacrificing sleep in the process). 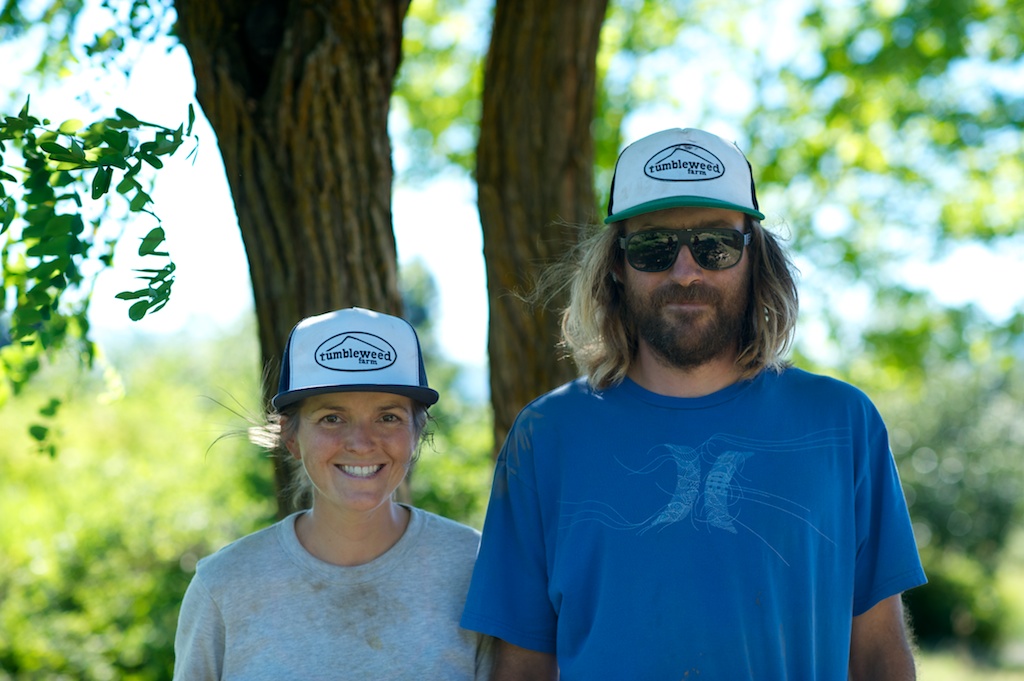 That fateful conversation in Bend sprung from a desire to continue their outdoor, adventurous life in a more meaningful way. Their “tumbleweed” lifestyle had solidified their relationship, peppered their life with interesting experiences and a supportive network of people, but also made them yearn for a place to root down and capitalize on all they knew. Taylor and Andrea wouldn’t be the farmers they’re becoming, or be able to adapt to the ever-changing nature of agriculture, without the experiences they gained from tumbling. Failed crops and sleep deprivation aside, they make setting down roots look pretty appealing. And their adventures haven’t stopped – they’ve just expanded and matured.