“Why can’t we walk into a supermarket in December and buy an amazing tomato?”

That’s the question Barry Estabrook uses as a jumping off point for his new book, Tomatoland. For me, this complicated question begets two other questions:  do we want to?  Should we want to?

When people first begin to eat seasonally, they usually target a few foods to eat only when in-season;  the driving factor for this decision is usually taste.  Several years ago,  I began to change my approach to food by passively avoiding out of season tomatoes, along with several other fruits.  My rationale was that I knew what an in-season tomato tasted like, and I knew what an out-of-season tomato tasted like.  Avoid a bland, hard-as-a rock tomato during the winter?  Okay! 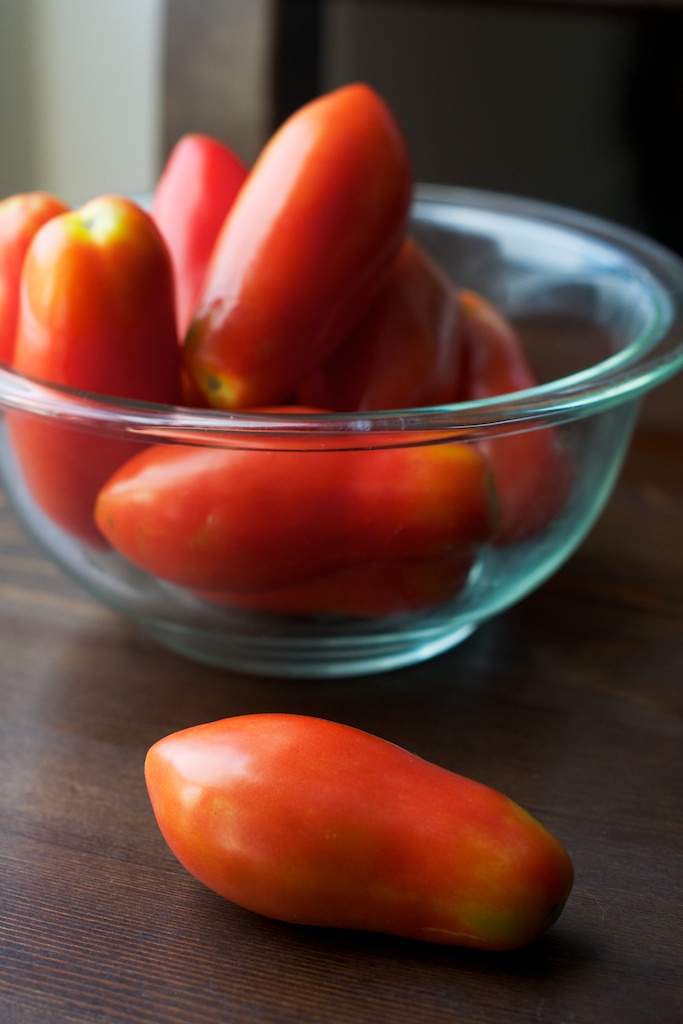 When phrased in those terms, it wasn’t much of a sacrifice. As I started to focus on eating seasonally, if I were served tomatoes in February at a restaurant, I’d be mildly irritated and probably push them aside.  But as a vegetarian, when faced with a menu of deli meats and tuna salad for lunch, I’d still order tomato, basil, mozzarella sandwiches when I had no choice.  And I still ate the side salad topped with tomatoes.

About 16 months ago, my passive reluctance morphed into active avoidance.  I just can’t bring myself to eat the rock-hard tasteless fruit that’s been thoughtlessly incorporated into my meal.  And my opinions on the tomato’s (lack of) taste have been trumped by an even greater reason not to eat them:  human welfare. 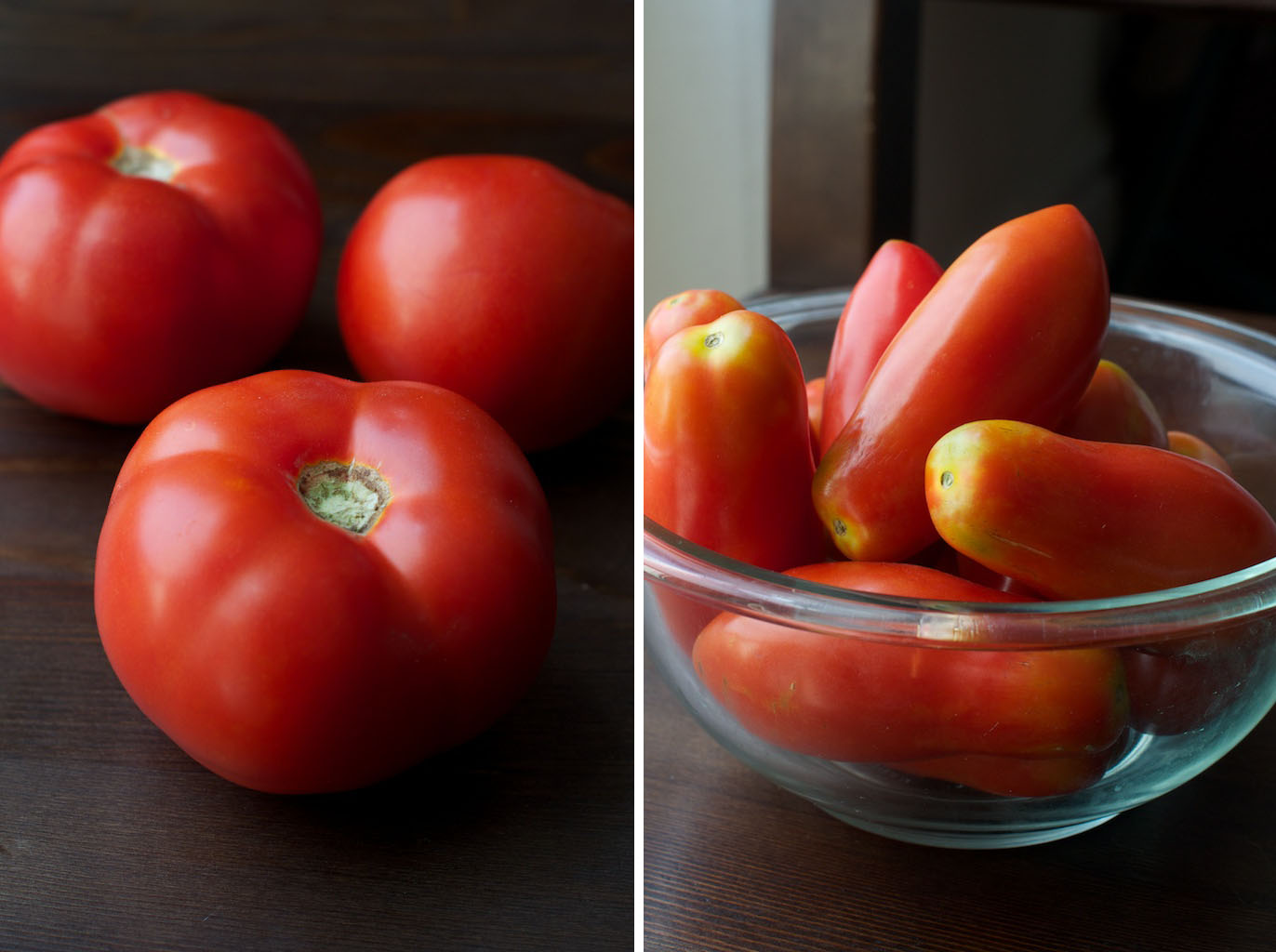 I’ve written before about my personal food philosophy, but I think it bears repeating:  I believe in eating locally and seasonally--within reason.  In the summer, fall, and late spring, we cook exclusively with what’s available locally.  This food tastes better, stores better, and is grown on farms we can visit by farmers we can talk to.  Winter in the Northeast is harder; we get as much as we can from the farmers’ markets, but sometimes have to supplement with something canned or frozen.

Exceptions have to be made.  If you don’t live near a farmers’ market, but your local grocery store sells meat from a national coop comprised of family farms (the Niman Ranch model comes to be mind), then of course I have no qualms about buying something that’s not local. This is especially true when those farms are practicing strong animal welfare and helping their local communities and environment, or when our own local farms are buried under a foot of snow.  If I occasionally eat food that’s not local to me, but seasonal elsewhere, what is my issue with tomatoes?  That’s where the argument becomes a little trickier. 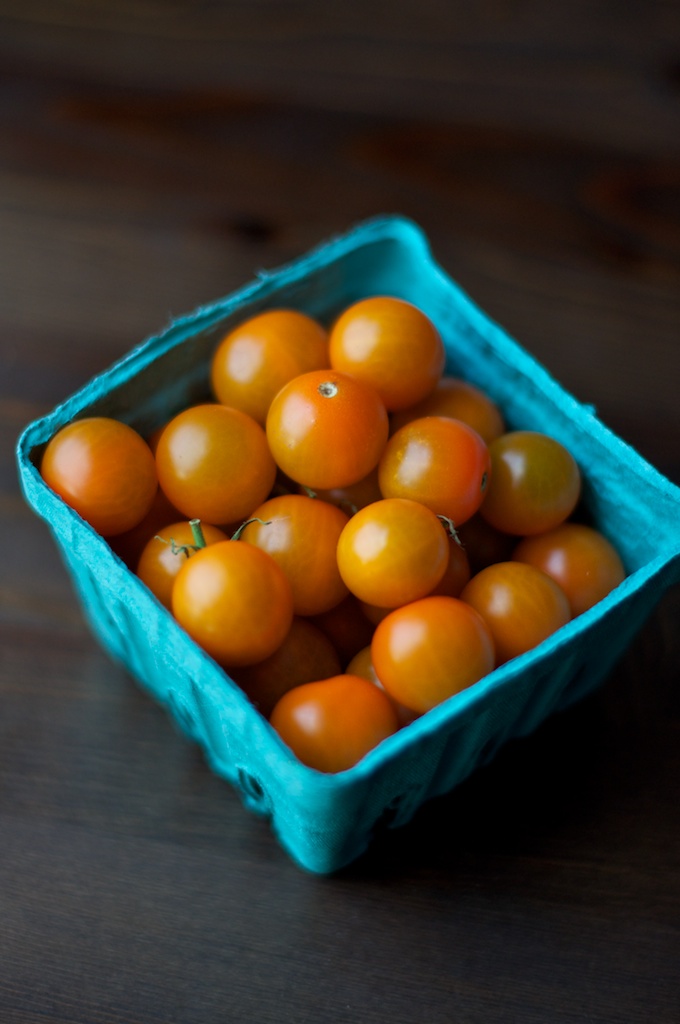 Despite my active, often vocal, avoidance of tomatoes, I’m still implicit in supporting a system propped up by underpayed (or enslaved) migrant workers and a slew of pesticides and chemicals.  How?  When I’m out to lunch at a restaurant or grabbing a quick sandwich from a cafe, 9.5 times out of 10, I’m eating a tomato devoid of flavor, picked by an underpaid, often imprisoned, migrant worker--even if it’s the middle of the summer, like it is today.  It’s not just the taste that makes me want to push my plate away; the blandness is compounded by the fact that I support a system where such atrocities occur on a day to day basis.

Here’s where Estabrook’s Tomatoland comes in.  I bought the book last month, eager for some details, facts, and numbers about how tomatoes became so prevalent in our American diet (and yet still treated like an afterthought in many restaurants).  I was curious about when tomatoes started looking the same and what factors made a tomato’s taste irrelevant.  I’d read a few articles about the plights of migrant workers in Florida but wanted more details.

On the East Coast and parts of the Midwest, year-round tomato options are grown in the same state:  Florida.  Sandy, humid, boggy Florida.  Tomato plants were originally domesticated by Mayans in today’s Southern Mexico and Central America, a consistently dry, hot climate.  So how did Florida become such a big player in the tomato industry? 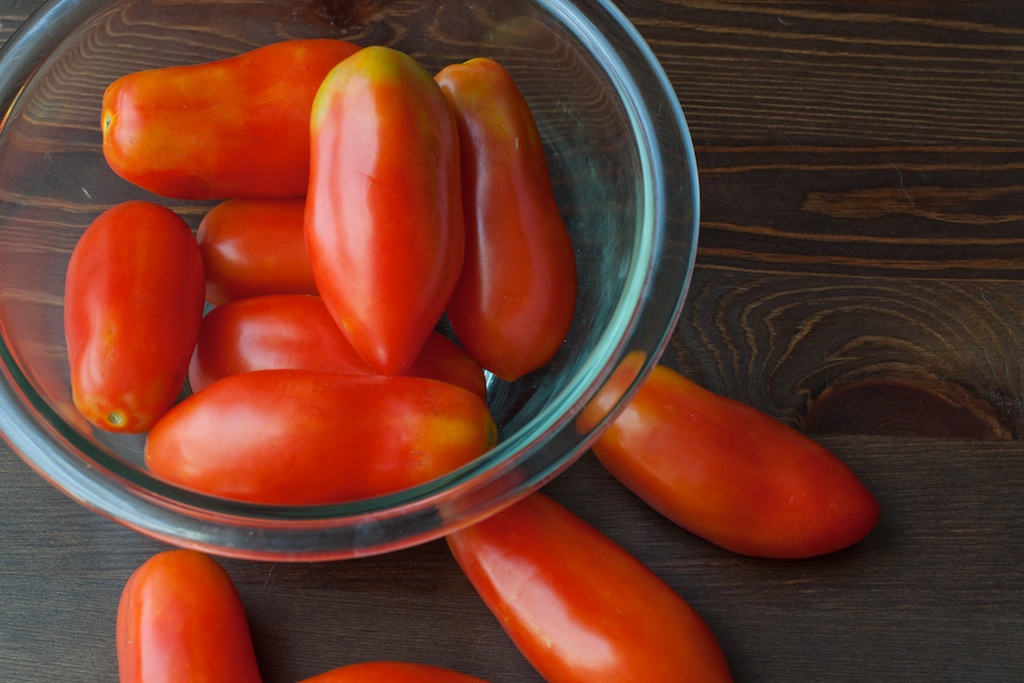 Florida soil has no nitrogen and the ground retains little moisture.  The state’s high humidity attracts both blights and mold.  Florida’s inconsistent rain pattern necessitates constant irrigation.  To use Estabrook’s phrase, growing tomatoes in Florida is akin to “chemical, biological, scorched earth warfare”.  This warfare takes all sorts of forms, from methyl bromide, which is lethal to both humans and the ozone layer, to methyl iodide, which can cause permanent neurological damage.  There are 19 available herbicides, 31 available fungicides, and 60 available pesticides for tomato production.  This adds up to gasp-worthy cost of $2000 worth of fertilizer and pesticides applied to each acre of tomatoes.

These scorched earth tomatoes are picked ‘green-ripe’.  Unless you cut into a tomato, it’s impossible to distinguish green ripe from green.  They’re then sprayed with chlorine before being gassed with ethylene to stimulate the red color.  These rock hard tomatoes are basically unbreakable.  If a ripe tomato falls off my kitchen counter, it’s a sad red massacre.  When Estabrook was driving around Florida, he’d see tomatoes fall off trucks, bounce multiple times on the highway, and be as intact as their fellow tomatoes still in the truck. 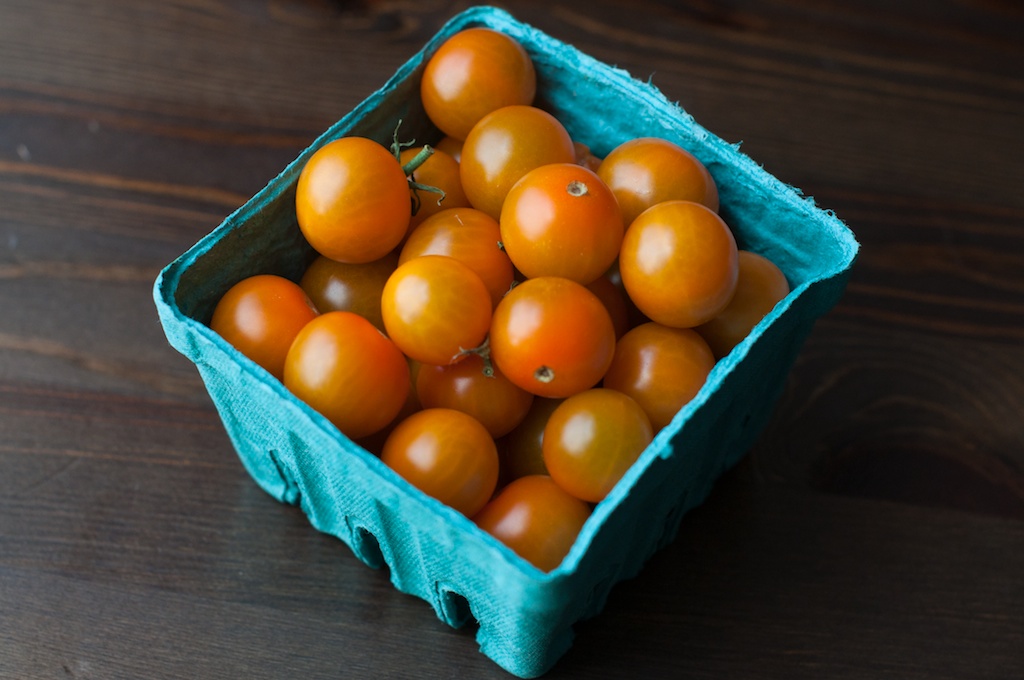 Rock hard tomatoes, thousands of dollars worth of pesticides sprayed to make growing them possible....what’s the allure?  Growing tomatoes in Florida has everything to do with marketing and nothing to do with biology.

In 1880, a man by the name of Joel Hendrix proposed exporting green tomatoes, visualizing dollars signs as he imagined cold Northeasterners desperate for a taste of summer.  His plan was to sell tomatoes that were “green, cheap, and off season”.  Following Hendrix’s lead, Florida growers began using ethylene in 1931.  The US embargo of Cuba in 1962 rounded off Florida’s dominance in the tomato market, when the state stepped in to fill Cuba’s void.

These factors help explain how Florida began to develop a stronghold in the the East coast tomato industry, but it doesn’t begin to describe the measures the state’s tomato industry are currently taking to maintain their dominance.

When I first heard about “slavery” in Florida, I thought reporters were drawing an analogy: “oh, it’s like slavery” or  “the conditions seem as horrible as slavery”.  I didn’t realize that some of what is currently happening in Florida isn’t like slavery--it is slavery.

Those hundreds of pesticides I mentioned earlier aren’t just being sprayed on the tomatoes, they’re dousing the millions of migrant workers, male, female, young and old, who pick them.  Tomato companies tend to look for workers with three qualifications:

After being picked up along the US-Mexico border, these workers are transported to their final destination, frequently hundreds of miles away.  While traveling, they’re crammed 15 to a van, with little-to-nothing to eat and few breaks in the drive.  When they finally arrive, the crew boss slaps them with transportation fees, immediately putting them in debt.   If workers are given a place to ‘squat’, that is additional debt applied to their already steep transportation fee.  Even before picking a single tomato, the worker has spent his first several paychecks. 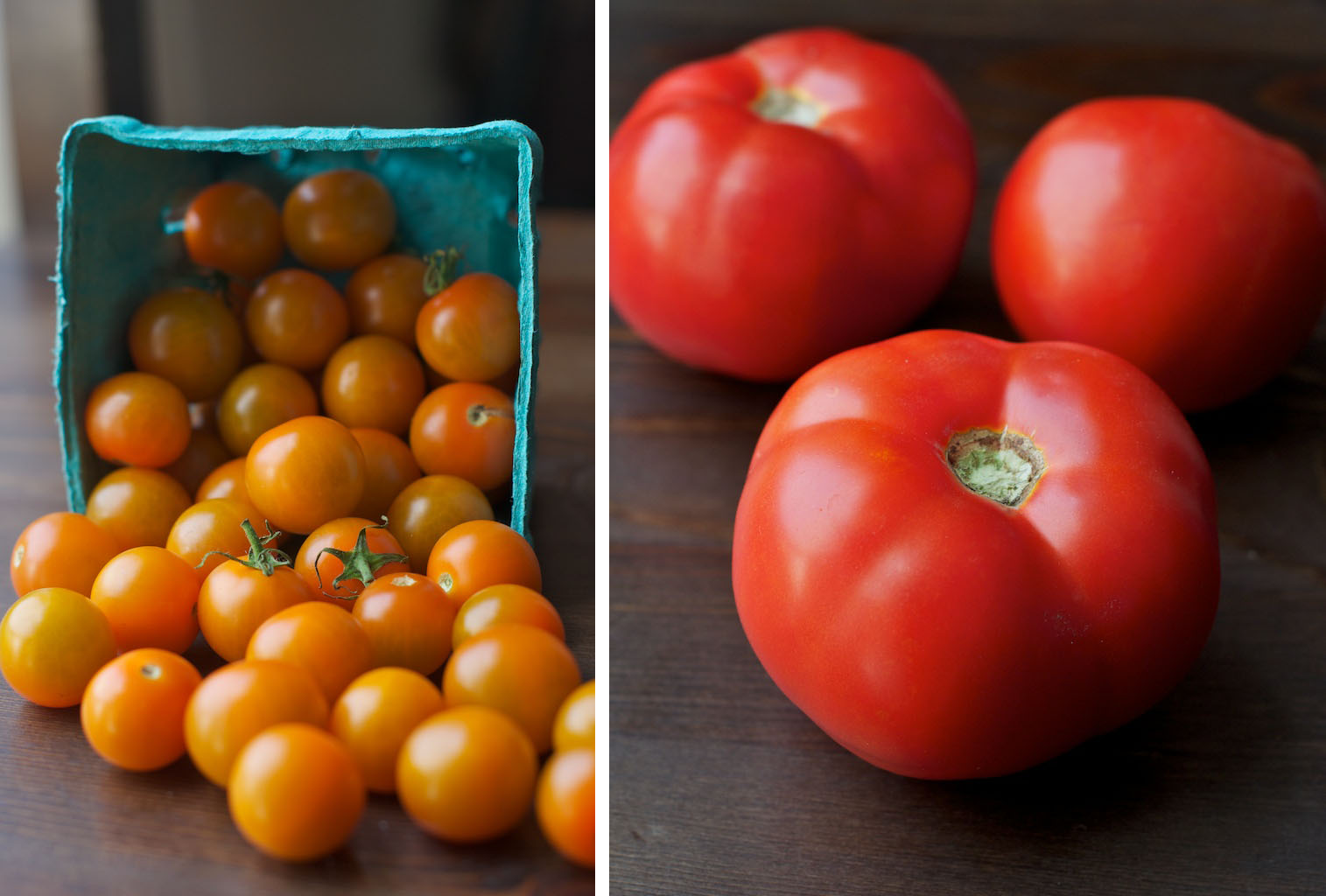 Estabrook documented one stark situation in which a worker was promised a place to live.  This place turned out to be a windowless trailer, where everything cost money:  it was $5 to use an outdoor hose to spray off the chemicals.  Many workers find themselves in a situation in which they’re never paid because they’re always working off their debt.  Estabrook implied that slavery is similar to the slavery we think of before the Civil War:  the institution is the same, but the semantics have changed. Slavery morphed into convict lease which developed into debt peonage.  People are still being held against their will and even dragged into fields if they resist working.

Because the majority of our country’s migrant workers are without education, money, and are illegal immigrants, they are at the mercy of their bosses.  This means that when they’re forced to go pick in fields that were recently sprayed with chemicals, they don’t report the incident.  Along with no legal documentation or medical insurance, they risk dismissal if they report wrongdoing.  Instead, workers are left to struggle with chronic illness, horrifying birth defects (children born without arms and legs), and a much shorter than expected life span.  In a retired farmworker community in Lake Apopka, 83% of residents now claim poor health.

Immokalee is the ground zero for this modern day slavery.  You may have heard of the recent boycott of Trader Joe’s tomatoes, or the boycott of Taco Bell and McDonald’s from several years ago.  These boycotts are the brainchild of the Coalition of Immokalee  Workers.  Estabrook cites numerous examples of effective mobilizations organized by the coalition, most notably the Campaign for Fair Food.  The Coalition decided that “if the farmer says they can’t pay us more, why not take the case directly to the fast food customers”.  They petitioned the fast food companies to pay a penny more per pound of tomatoes.  The coalition then launched a boycott of all Taco Bells, before traveling to Florida colleges and eventually reaching the entire country.  To see a full timeline of the Campaign for Fair Food, including which restaurants and grocery stores have signed on, visit their website.

With success at most national fast food chains, the CIW has now turned to asking for that penny more per pound of tomatoes at nationwide grocery stores.  With the exception of Whole Foods, no supermarket has joined the CIW.  This includes Trader Joe’s, which has felt the wrath of many angry consumers lately.  Though Trader Joe’s has vocally stated that all Trader Joe supplied tomatoes abide by a CIW code of conduct, the store hasn’t officially signed any kind of binding legal agreement with the CIW. 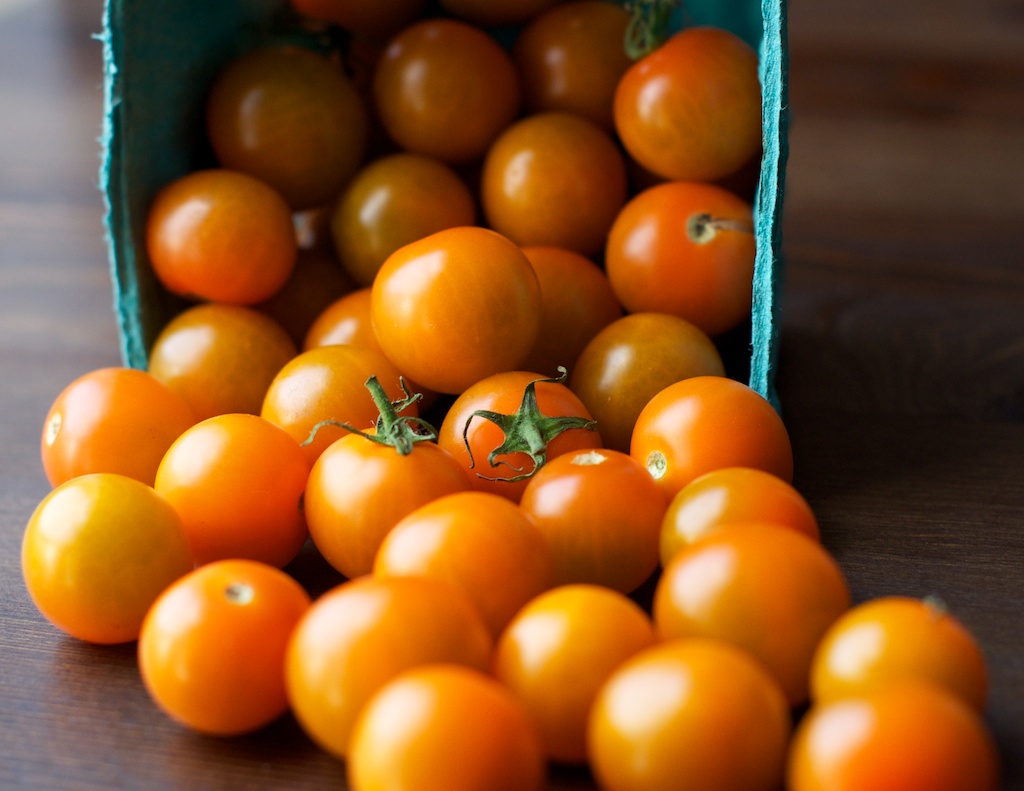 Protests are currently ongoing throughout the country this August at Trader Joes, Giant, Kroger, and Stop and Shop.

Several years ago, I started my quest to eat locally, seasonally and ethically, with the driving factor of taste.  After reading Tomatoland, I can’t envision a situation where I’ll crave a non-local, out of season tomato.  I can’t buy a tomato grown with pesticides in inhospitable conditions, picked by people who are either enslaved or dramatically underpayed, and implicit in destroying both the environment and our working class, illegal or otherwise.  All of this destruction--and the out of season tomato doesn’t even taste like a tomato.

It’s now August--prime tomato season.   The tomatoes that are sprouting in your gardens or arranged on tables at the farmers market aren’t only your best bet, consider making them your only bet.  It’s time to stop accepting food that tastes like nothing and negatively impacts so many people.  As Tomatoland made clear, there’s no easy way to breed for taste.  Tomatoes aren’t blessed with a single genetic marker that makes them “taste like tomatoes”.  The farmers in New York and neighboring New Jersey know how to grow good tasting tomatoes; I’m sure that the local farmers wherever you live do, as well.  Despite the millions of dollars funneled into research to find the appropriate genes for a portable, long-lasting, and delightfully tasting tomato, right now--in August-- we have tomatoes that are as tomato-y as possible.  Cook with tomatoes every meal if you want to!  And for the rest of the months--freeze the tomatoes, can the tomatoes, make tomato jam, or be content with accepting that slave picked tomatoes are completely unacceptable.

One phrase that’s remained with me a few weeks after finishing Tomatoland is:   “celebrate oddness, seek out variation”.  You can easily apply this attitude to other parts of your life if you wish, but I urge you to remember this sentence when you buy your next tomato!