When Nils Wessell, the one-man woodworker/proprietor/owner of Brooklyn Butcher Blocks agreed to meet me at 'the pie shop', there was no confusion as to which pie shop he meant:  Gowanus’ Four and Twenty Blackbirds—THE pie shop, at least in our opinions. The selection of pies at this Brooklyn gem varies depending on the day, hour, and season.  All the more reason to go as frequently as possible.  Which Nils does, as his Gowanus based studio is a few blocks away. 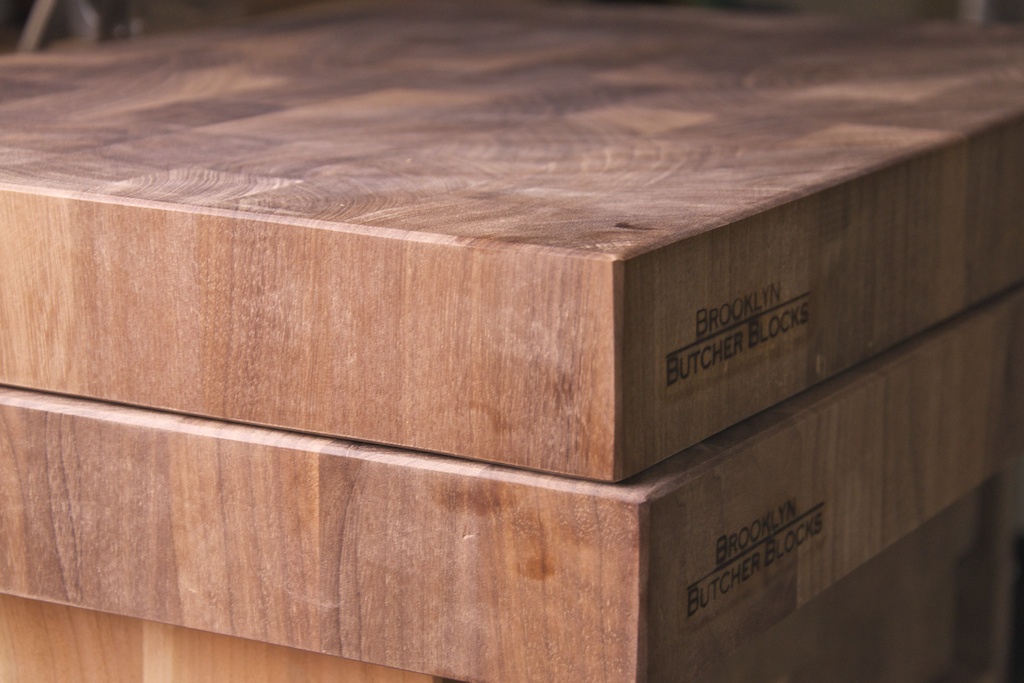 I met Nils briefly in December at the Coffee and Cocoa New Amsterdam Market. Justin and I (and our wellies and umbrellas) ventured out on that rainy, chilly day—not unlike today, actually—specifically to drink a few cups of Blue Bottle Coffee. The weather practically required coffee to keep us sane.  As we wandered the market with our quickly disappearing cups of coffee, we stopped at a table stacked with several magnificent cherry and walnut butcher blocks.   We chatted with Nils briefly and learned more about Brooklyn Butcher Blocks, before taking a card and making plans to order one of his handcrafted cutting boards AFTER the holidays.

Before ordering a block, I messaged Nils to learn more about his craft and his path to creating Brooklyn Butcher Blocks.

For Nils, who moved to Brooklyn two years ago, making butcher blocks and starting his own business has been a metaphorical series of building blocks (appropriately enough) or as he says, “like he’s part of a giant snowball”.  A self-proclaimed hands-on learner, Nils spent 6 months in Portland, Oregon after graduating from Bard College in 2008, frustrated and unemployed.  He decided to move to Brooklyn “to do something”.   He wasn’t sure what ‘something’ meant, but…

When Nils moved to Brooklyn, he wasted no time seeking his inspiration referenced earlier. He contacted and then apprenticed with Joel Bukiewicz of Cut Brooklyn.  Despite an affinity for thinking and working with his hands, cooking was a hands-on task that baffled Nils.  Beyond learning a new skill, he hoped that working with Joel would eliminate some of the “mystique” that surrounded cooking. 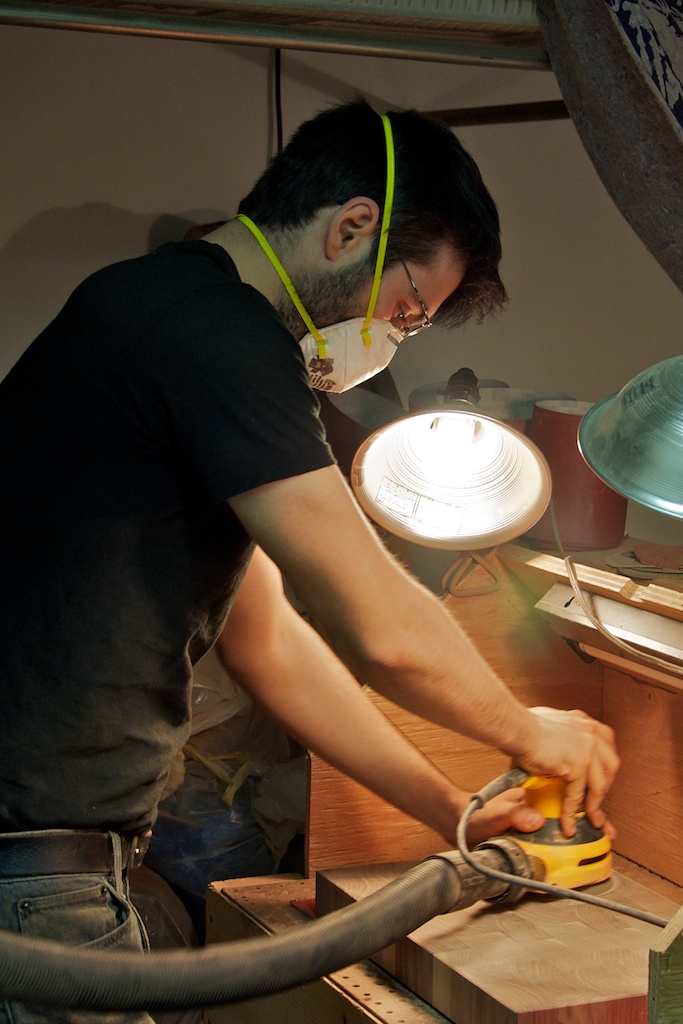 After working with Joel for nearly a year and half, Nils had picked up on an undercurrent of frustration: customers were buying and using Cut’s knives on horrible plastic cutting boards. Cut Brooklyn sells exquisite handmade knives that can cost $500 or more.  These knives are essentially functional works of art—not meant for cheap, plastic cutting boards.

Nils, who has some wood working experience in his background,  decided to make cutting boards fit for the quality of Joel’s (or other high quality) knives.

Nils’ first experience selling directly to customers came at this summer’s UnFancy Food Show, selling side by side with Joel.  Nils was overwhelmed by the positive response to his products.   As he shared, “In Brooklyn, [the word] artisan means something; it’s well-respected.  Artisan craftspeople—I just felt like, how would I not want to be a part of that?” 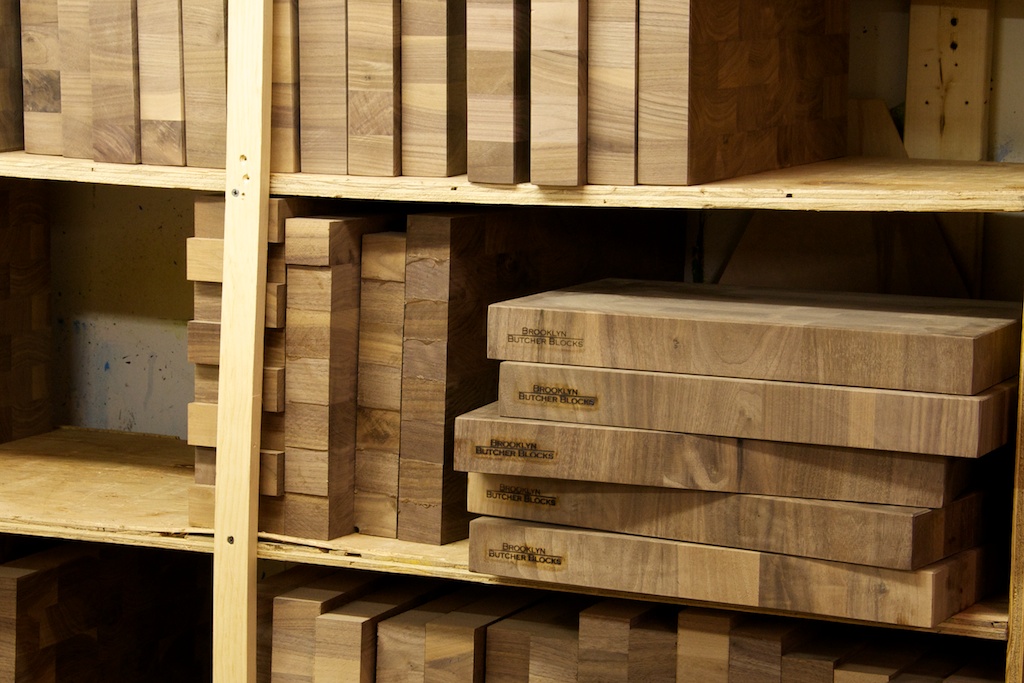 For now, Brooklyn Butcher Blocks makes 12"x18"x2" cherry and walnut end grain boards, starting for $150. Nils also sells 18"x24"x2" boards for $275 in cherry and $300 in walnut.   These boards are designed to last a lifetime. As an added bonus, all of the materials in each cutting board are from the United States, including the glue and oil.  If you have a vision for the kind of wood or look you’d like, he’s also amenable to custom orders.

As I saw in person, Nils is currently experimenting with his final model for cheeseboards (and Cut Brooklyn will soon be selling an accompanying cheese knife).   Nils plans to be a frequent presence when the New Amsterdam Market opens again this Spring.  To learn when his cheeseboards will be for sale, as well as the dates he’ll be at the market, check Brooklyn Butcher Blocks’ Facebook page.

Read below for a few excerpts from our conversation over pie.

Q: How did your business develop after the Unfancy Food Show?

N.W: Orders just started coming in, from [both from individuals and larger retail stores]. I was in another market up in Midtown and through that got invited to the New Amsterdam Market.  I did the last two and got the tail end of it.  I started to realize that I enjoy small markets and am hoping to do a lot more of that.

On December 1st, Joel opened up his storefront shop, Cut Brooklyn, and I started selling boards through his shop.  It’s all happened so fast.  In the last New Amsterdam Market, I ran into Florence Fabricant from the New York Times who was interested in learning about Joel and me [see the article here]. 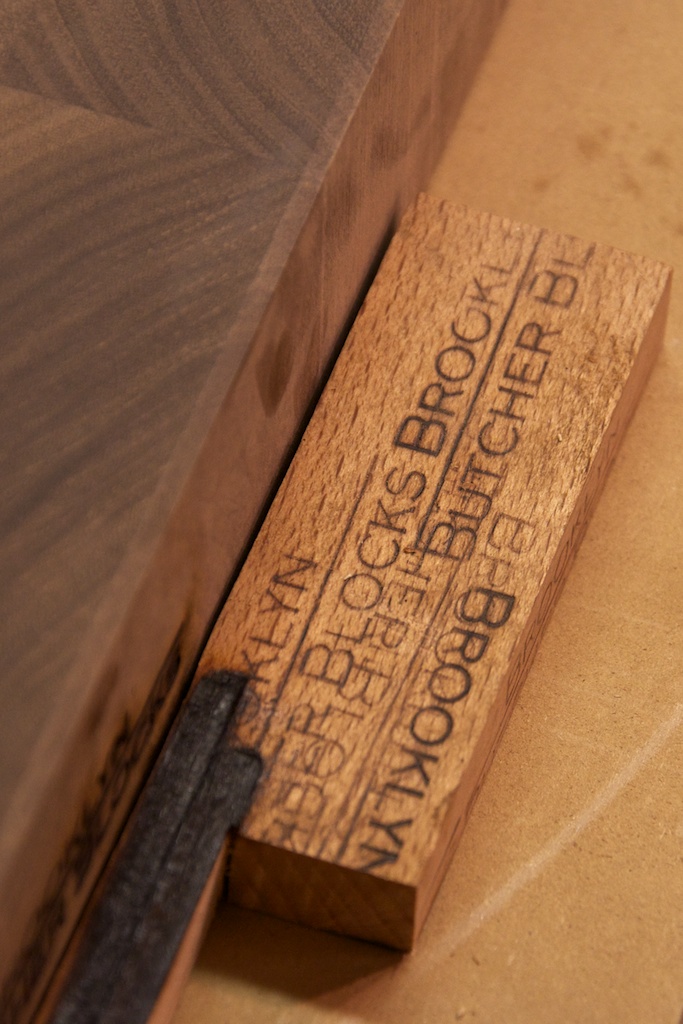 Q: What is the process after you get the lumber?

N.W: I get a rough cut and put it through the jointer and make sure the wood is perfectly flat.  I have to start making the sides glue ready.  I’ll make approximately 3.3 inch strips and will glue together a few of those and one small band (1 inch and ¾), so it’s about 18 inches wide.  After that finishes gluing, the whole thing gets surfaced.  I make a bunch of cross cuts, so I end up with other strips.  That piece then gets flipped up and that’s the end grain.  I make 6-8 of those and flip all those up and those get glued together.  Then that dries and I trim the edges. I sand [the boards] and treat them with mineral oil and a beeswax mix I make.

I compost everything at Compost for Brooklyn, so it’s really minimal waste. 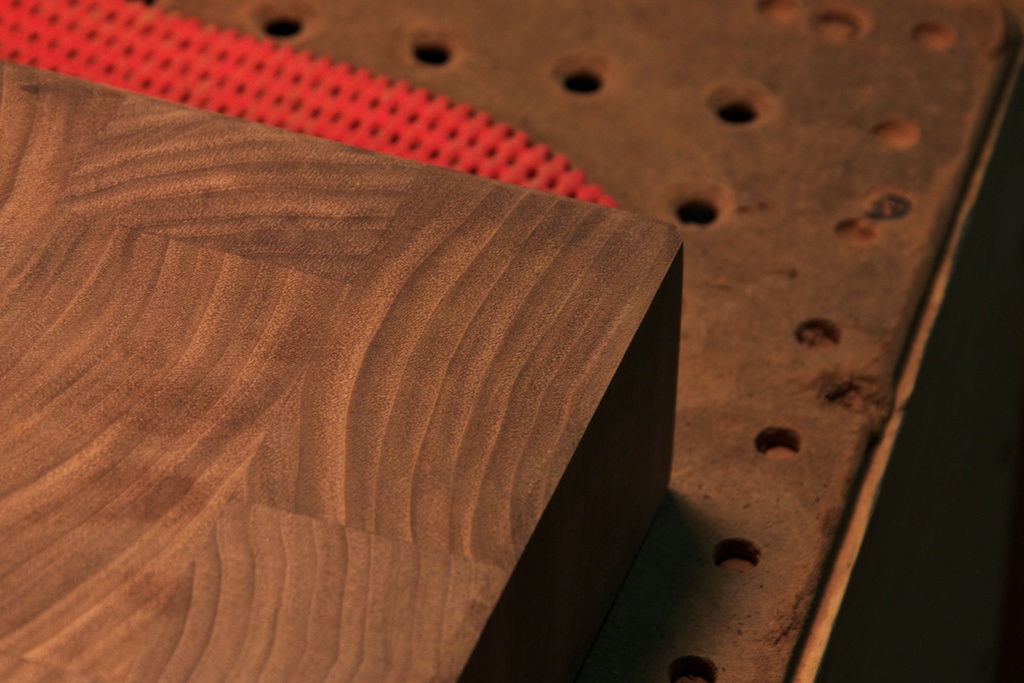 Q: Start to finish, how long does one board take?

N.W: It varies.  The thing is I never take into account is finishing, packing, and sending out.  Somewhere in the neighborhood between 4 and 6 hours.

Q: How did you get your equipment?

N.W: Some stuff I bought myself.  I had an arrangement to use another shop’s equipment. I do all my servicing there for now.  I’m thinking in the next 6 months [I’ll buy more of my own equipment].   I’ve been saving as much as possible, eying equipment.  I don’t want to go into debt.  I’ve been avoiding that as much as possible. It seems like something way too common in America.  “Oh yeah, I’ll take out a huge loan and pay it off whenever”.  I’ve had access to this one shop and am hoping in the next 6 months, I’ll have space with a garage door.

Q: What product or item are you most proud of?

N.W: There’s this one cherry board I made.  Actually two boards, I remember well. Cherry can turn sap red—but I had one that turned really fiery red.  There was one long board I made where the sapwood was bright yellow, transitioning to green, transitioning to purple, then to brown.  It was wild.  I’m also pretty pleased with the cheeseboard I just made. 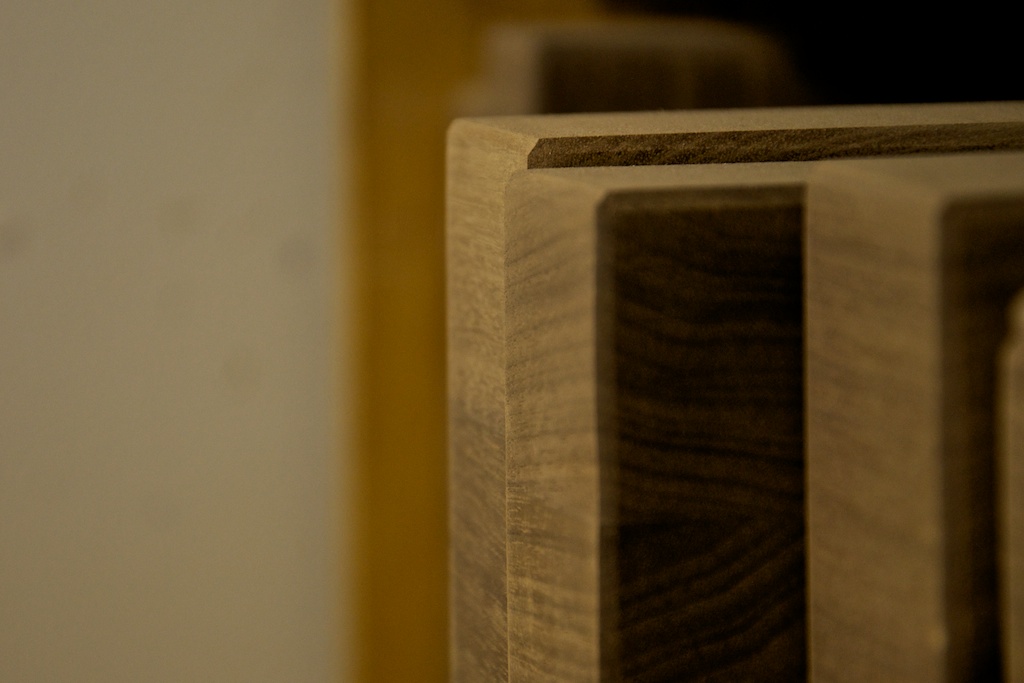 Q: Being a food related artisan, did you grow up with a relationship to food or did that start when you moved to Brooklyn?

N.W: It kind of started in Brooklyn.  I remember the summer before I came to Brooklyn—okay, this is kind of embarrassing—I was really stupid in the kitchen.  I remember staring at something [and thinking] “I don’t know what to do”.  And finally I got fed up with myself.  I started cooking some stuff. When I moved here, the thing that really happened was I started going out to eat.

N.W: The Farm on Adderley is definitely way up there.  I wish I lived closer.  Di Fara’s pizza is the best pizza in the universe.  There’s this one guy who has been doing it for years. 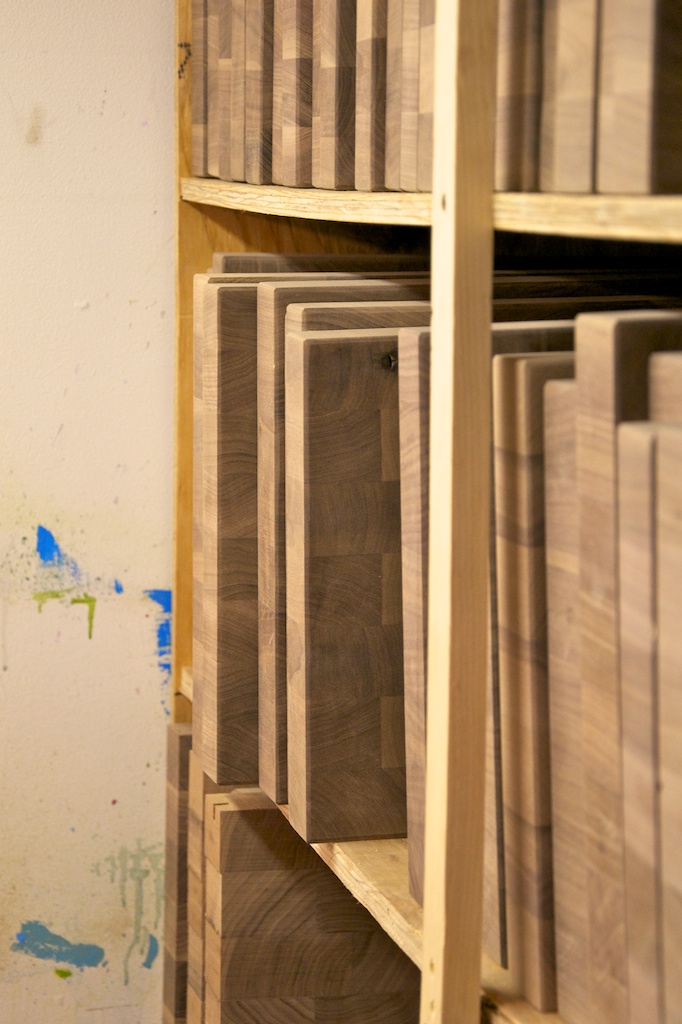 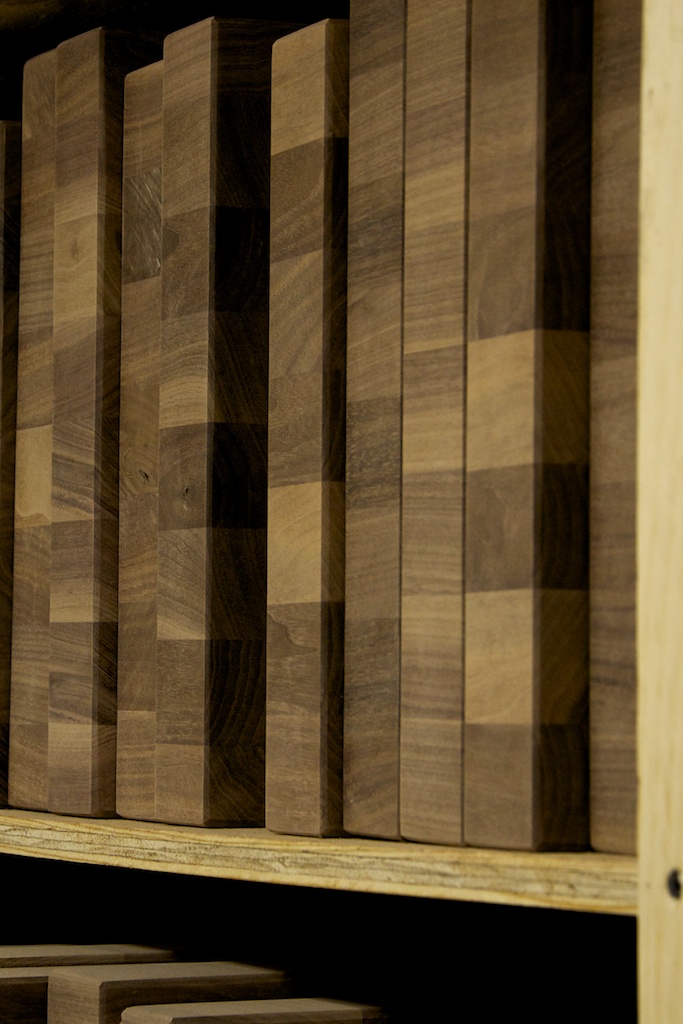 Q: Do you have any additional plans for growing your business more?

N.W: I’ve been thinking about making various kinds of kitchen furniture. This is farther off.  Not custom, but a product line.  [An] end grain tabletop using classic jointing techniques.  Making it by hand (chisel and hammer).  Having a place for pots and pans.  That’s something on my mind.  It wouldn’t be cheap but it’d be a lot of fun to do.