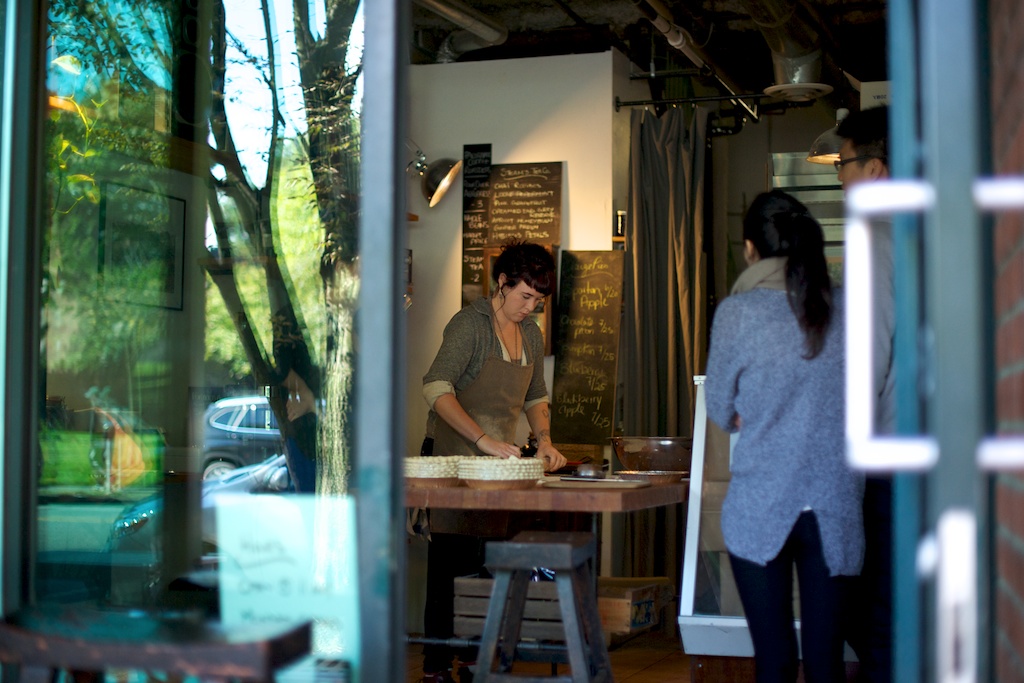 Imagine the hardiest slice of seasonal fruit pie you’ve ever eaten, cut and served to you by two Canadian sisters baking in a space barely big enough to hold the three of you. Despite the petiteness of the space, the shop still sports the familiar hip accoutrements: a chalkboard menu, pour-over coffee, even hand-glazed pottery. Now imagine leaving that space, an open pie box in your left palm, your right hand clutching a compostable fork as you try to maintain some level of decorum while shoveling huge chunks of pie into your mouth. But instead of walking past other familiar sites, perhaps a vintage clothing store or record shop, you find yourself in the middle of a fully functioning Chinatown, with vegetable, fish, and meat vendors hawking food, non-English speaking Chinese of all generations bustling about, and the overall din at a level you’d expect to hear in any vibrant market place. 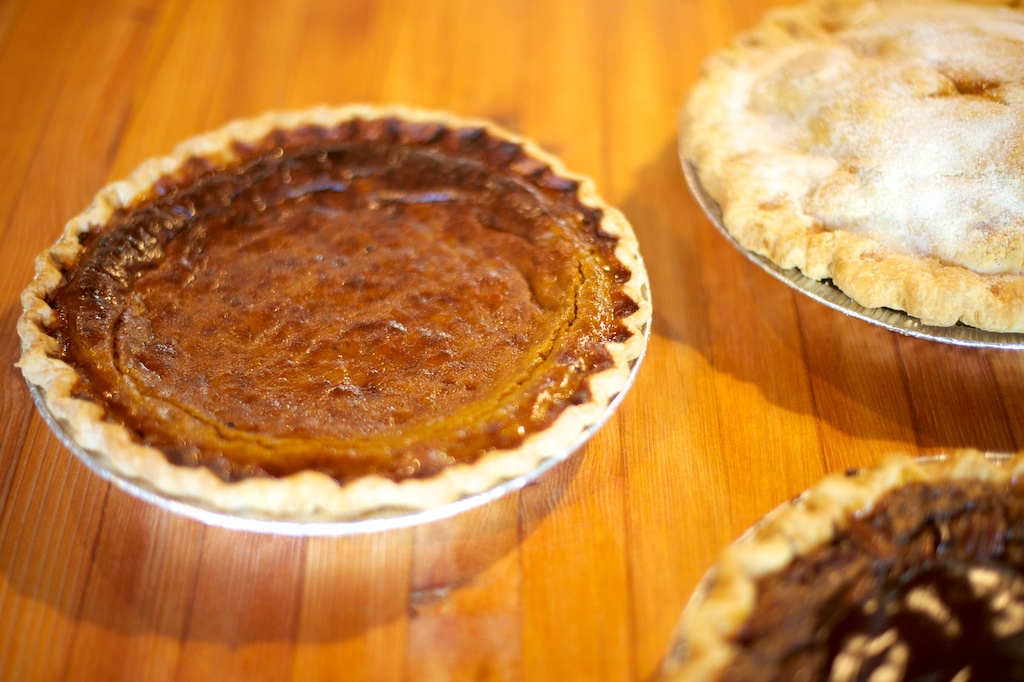 Intrigued? You’re not alone. Stephanie and Andrea French understand why their pie shop is an appealing story. The sisters are happily bemused by all the attention they’ve received since opening their small pie bakery, The Pie Shoppe, in Vancouver’s Chinatown neighborhood ten months ago. Despite minimal engagement on social media and with nary a public relations manager in sight, they’ve fielded numerous interviews, photo-shoots, blogger questions, and even a visit from Jamie Oliver. Type “The Pie Shoppe Vancouver” into Google to get a clearer picture of this media attention.

“I think it’s because we’re small and in Chinatown; we’re sisters; we’re young women in business,” Stephanie responded when I asked her about the maelstrom of attention they’ve received. “There are all these things, so they latch onto one of them." Admittedly, I first contacted Stephanie and Andrea French for many of the reasons Stephanie mentioned, curious about the origins of such a small shop (310 square feet in total), the motives behind their seasonal pie flavors, and how two siblings survive working in such close quarters.

But in person, the sisters acknowledged that while most press is good press, they’re in it for the pie, not the attention. 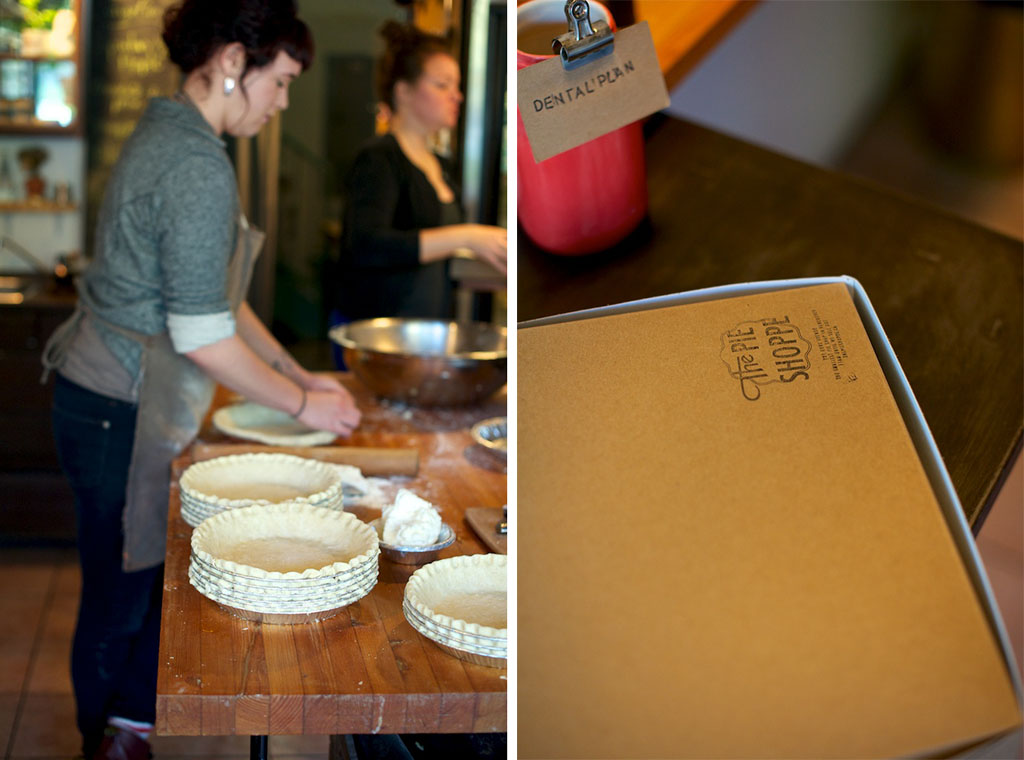 Born in Ottawa, Stephanie and Andrea moved to Vancouver seven years ago, seeking culture, community, and direction. Andrea worked in kitchens across the city, while Stephanie attended both art school and cooking school, creating art that expressed her passion for food politics and access. Searching for a way to escape a future as an isolated artist, Stephanie used a grant through the YMCA and World Bank to learn how to roast coffee, eventually selling the beans under her own label, Panoramic Coffee (which she currently sells at The Pie Shoppe). In between their individual pursuits, the sisters frequently collaborated on various catering and baking experiments, enjoying the challenge of creating something viable in a short amount of time, as well as the way different catering jobs connected them with a wider food community in Vancouver. 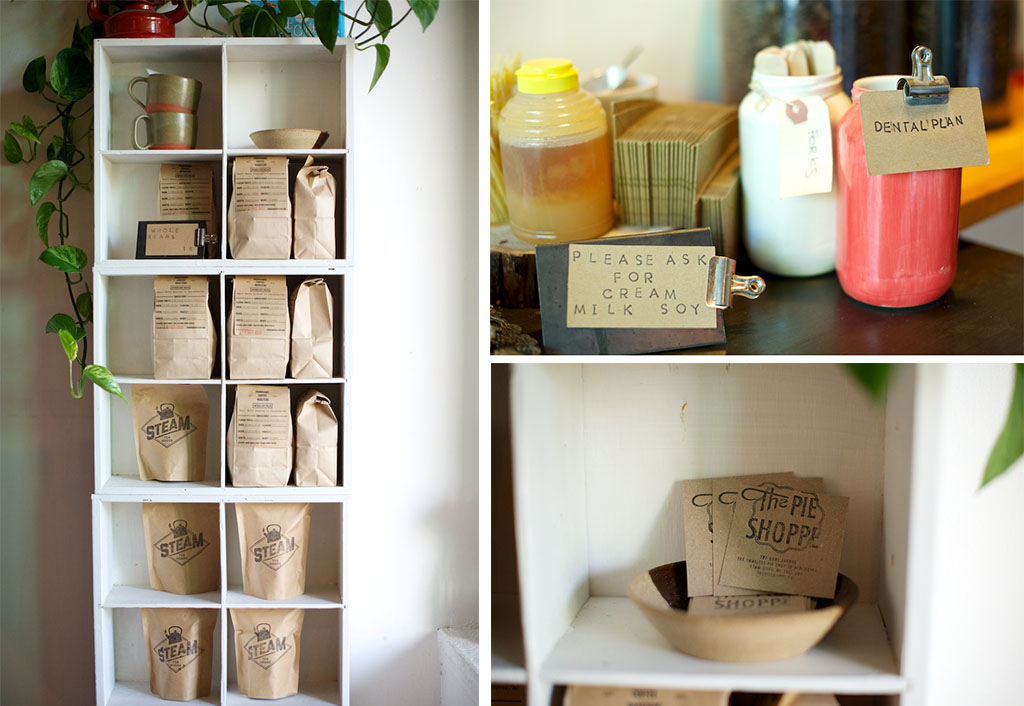 They decided to open the pie shop last December, but as Stephanie recounts, “we could have made anything. A few things led to pie. We did a few [pop ups and catering] that involved pie. Just having coffee didn’t really appeal to us; we needed something to complement it. Pie can be ever changing, it’s seasonal. This province is amazing for fruit, so it’s celebrating what’s here.”

After years of working and living in Vancouver, the French sisters feel a deep connection to the city, and recognized pie as a way to merge their mutual passion for baking with a deeper motive related to food access and politics. As Stephanie explains it, “Vancouver isn’t very political; you can do [the pie] and make way more of an impression because you’re tapping into multiple senses.” Once realizing their pie ambitions, they moved quickly, securing their small space in Chinatown from a word-of-mouth opening via their friend David Robinson, a ceramic artist who was vacating the space to move next door. 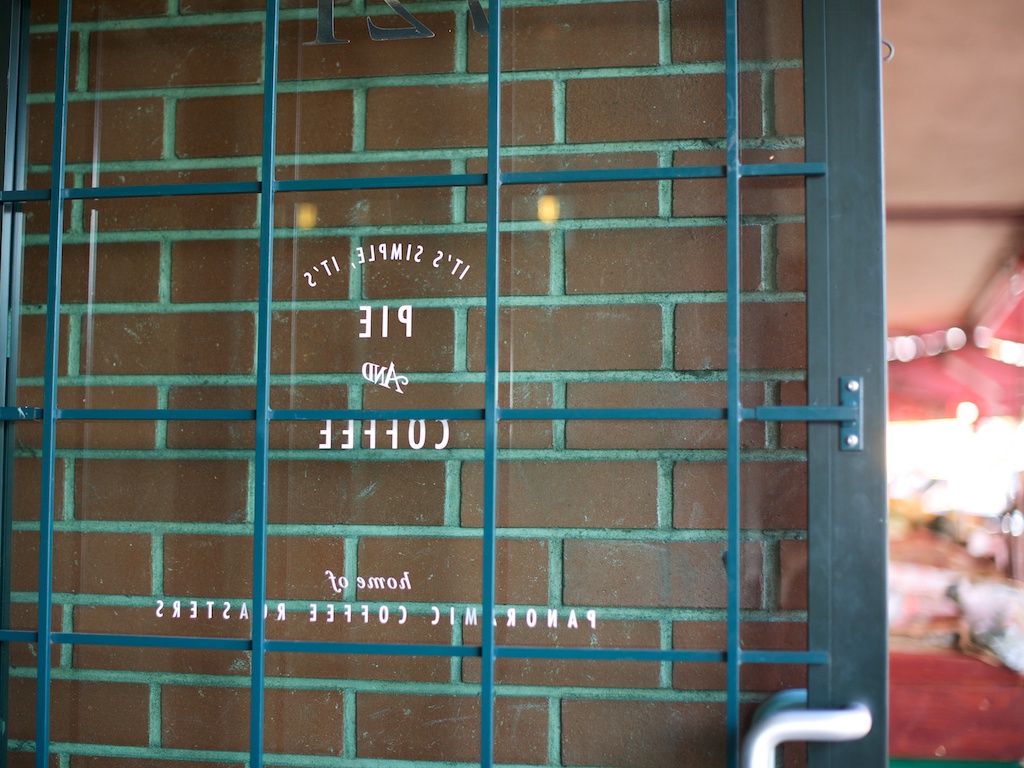 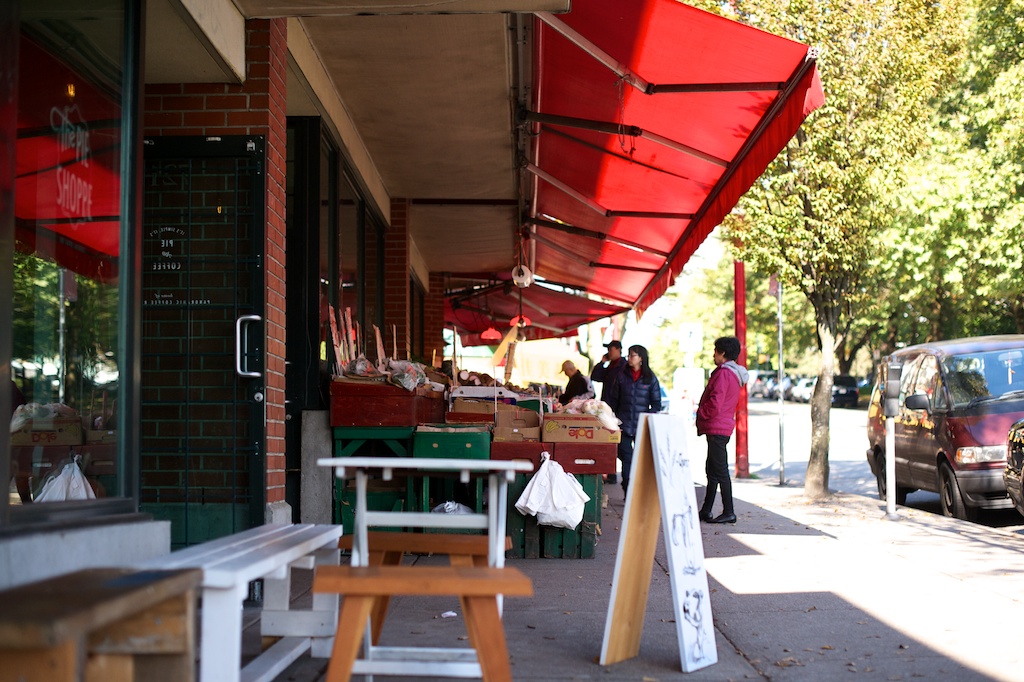 The sisters opened the shop in nine days, a community effort that included friends helping with woodwork and carpentry and others lending hands with branding and marketing. While a nine day opening creates yet another compelling angle to The Pie Shoppe’s story, Stephanie was quick to point out that the shop I sat in was the product of ten months of work; the nine day opening was bare bones, just enough to get the health inspector in and start baking in a home oven.

Besides the immediately available space, Stephanie and Andrea picked the Chinatown neighborhood for reasons ranging from the brutally honest (“it’s dirt cheap; the cheapest place to do anything in Vancouver”) to a mature awareness of the challenges of opening a business (“the small space was an experiment; we grabbed a six month lease, it did well, we grabbed another one”). And finally, with a bustling new bike highway cutting a path to downtown, and new construction springing up all about (a common sight throughout the city), Chinatown has somehow become the heart of innovative food experimentation and community in Vancouver.

The edges of Chinatown are flush with newcomers, from the community noodle shop Harvest, to The Union, a restaurant featuring southeast Asian share plates, to The Parker, “a sexy and sustainable vegetarian” restaurant, all new in the last two years. And Andrea and Stephanie are part of that “tight community”, telling me that they can’t walk down the street without bumping into someone they know. With Harvest, “we send people there, they send people here. Ramen and pie: It’s kinda a thing – two totally different things, but it works”. (Author admission: I ate ramen 15 minutes before interviewing Stephanie and Andrea. It does work.) 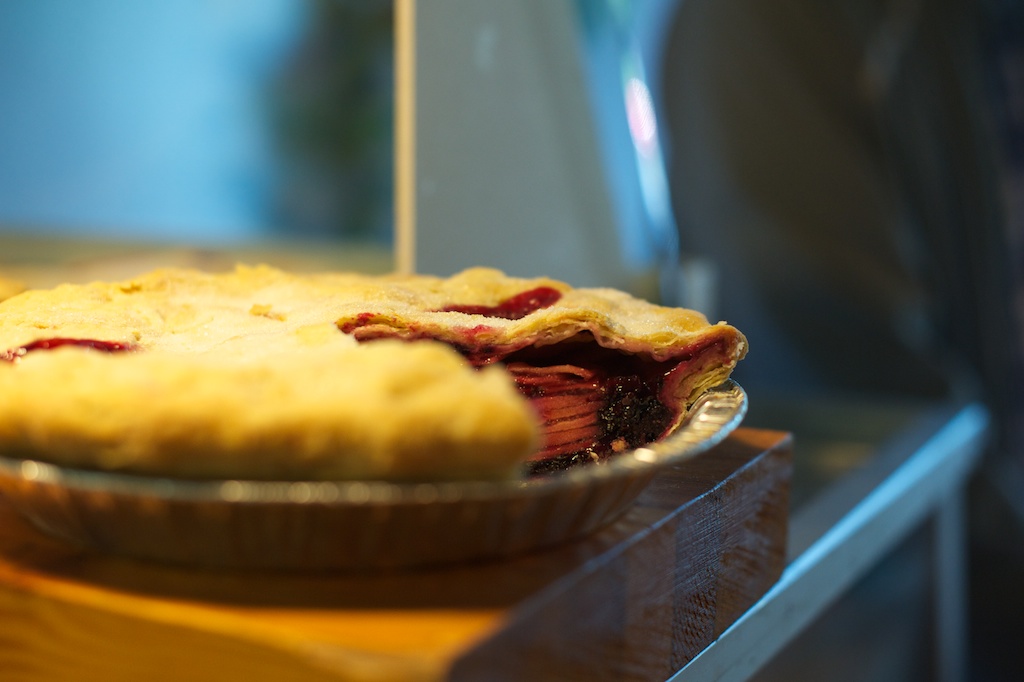 Andrea and Stephanie were rolling out pie dough for Thanksgiving orders when I entered into their small shop. They greeted me with a nonchalance I initially mistook for disinterest, but quickly learned was a manifestation of their relaxed personalities. Stephanie and Andrea exude a level of comfort that only close siblings seem to have: laughter at inside jokes, gentle ribbing, nurturing remarks, and the ability to work in total silence if necessary. In a small space, this total ease is the only way their business can possibly work. As Andrea said, “there are some things you just can’t say to other people.”

They’re also admittedly sarcastic and sassy, which makes for a pretty amusing dynamic, especially as I sat on a stool and watched a few customer interactions. Besides accounting (groans Stephanie, “it’s the worst”), the most challenging aspect of running their pie business has been moderating their sarcasm while fielding some pretty silly questions like “Do you make pie in here?”, an inquiry that’s been posed to Andrea as she’s rolling pie dough. Once the customers understand their personalities, many find it reassuring to know that that they’re “real people,” Stephanie laughed, “instead of [in a sing songy voice], ‘hi, how are you today?’” 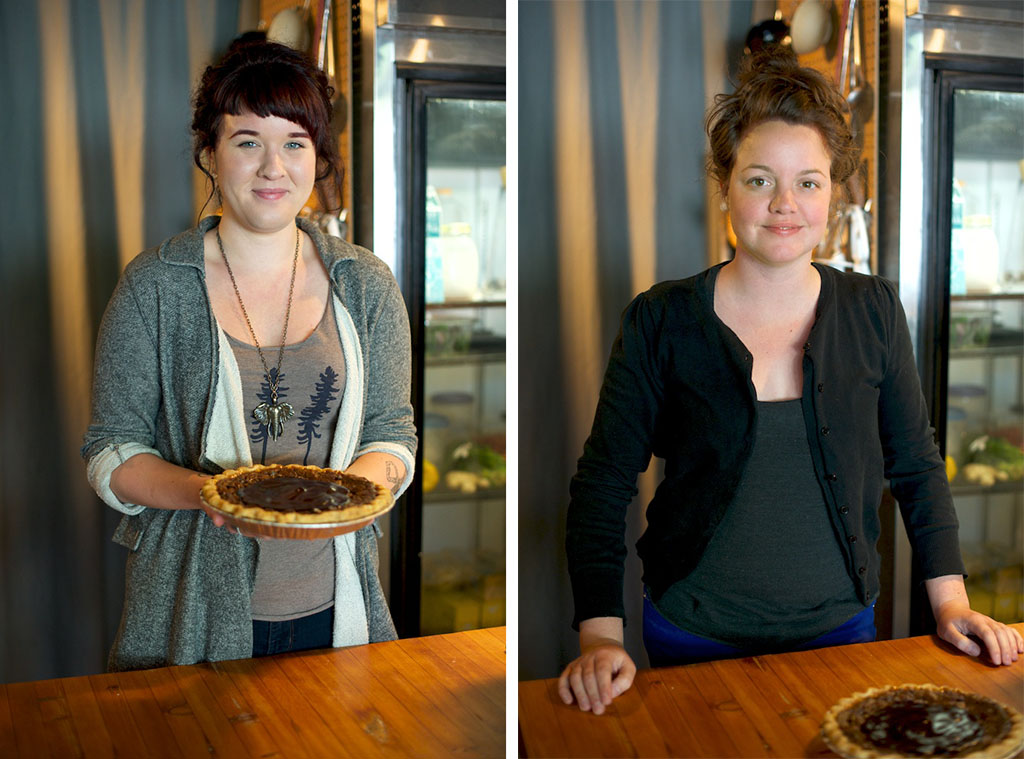 If you just pop in for a slice and a quick banter with Stephanie and Andrea, you might miss the fact that, along with making a fine slice of pie, the sisters bake with an awareness of their own impact, from their interactions with their Chinatown neighbors to their own environmental footprint. Stephanie elaborated that, “our butter is British Columbia, the flour is organic. This place is pretty ridiculous – the footprint is so low. We don’t preach about it; there’s nowhere that says we’re using compostable everything. We have one bag of garbage, if that, at the end of the day. There’s no waste – and we’ve worked in so many kitchens where there’s so much waste.” 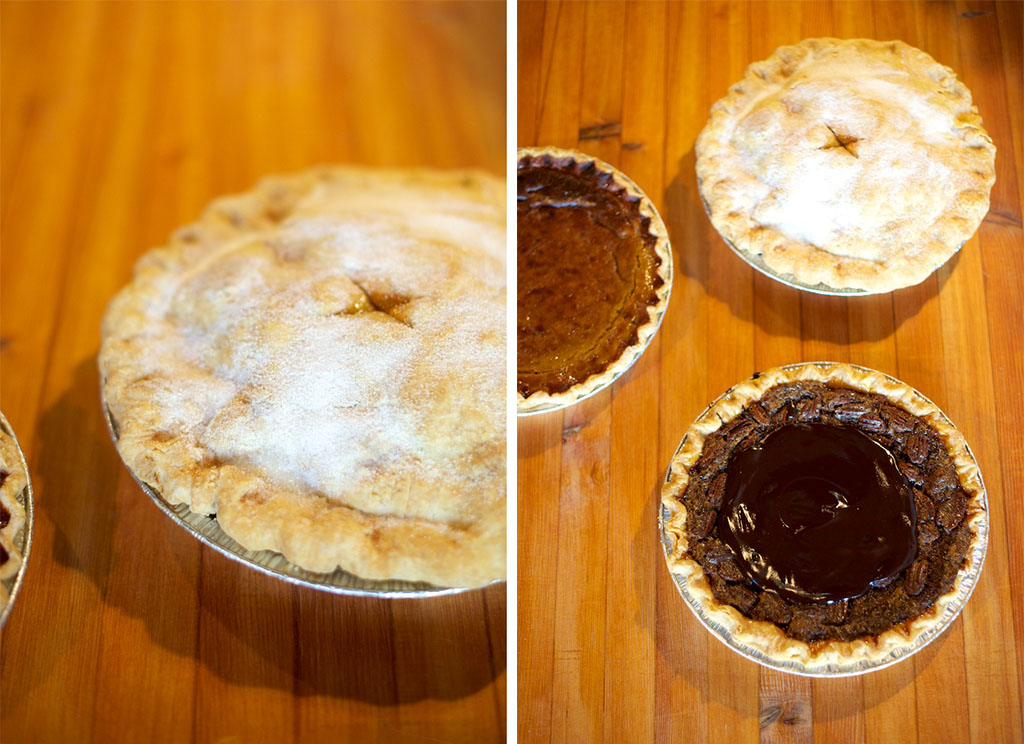 The sisters have been very careful and open about integrating their business into Chinatown. They welcome questions (yes, even the silly ones), and enjoy interacting with a multi-generational Chinese clientele. Stephanie shared that with the older Asian customers, pie isn’t something they generally eat, but they love blueberries and apples. And in contrast, the younger generation excitedly eats pie, and think the bakery “makes sense”. 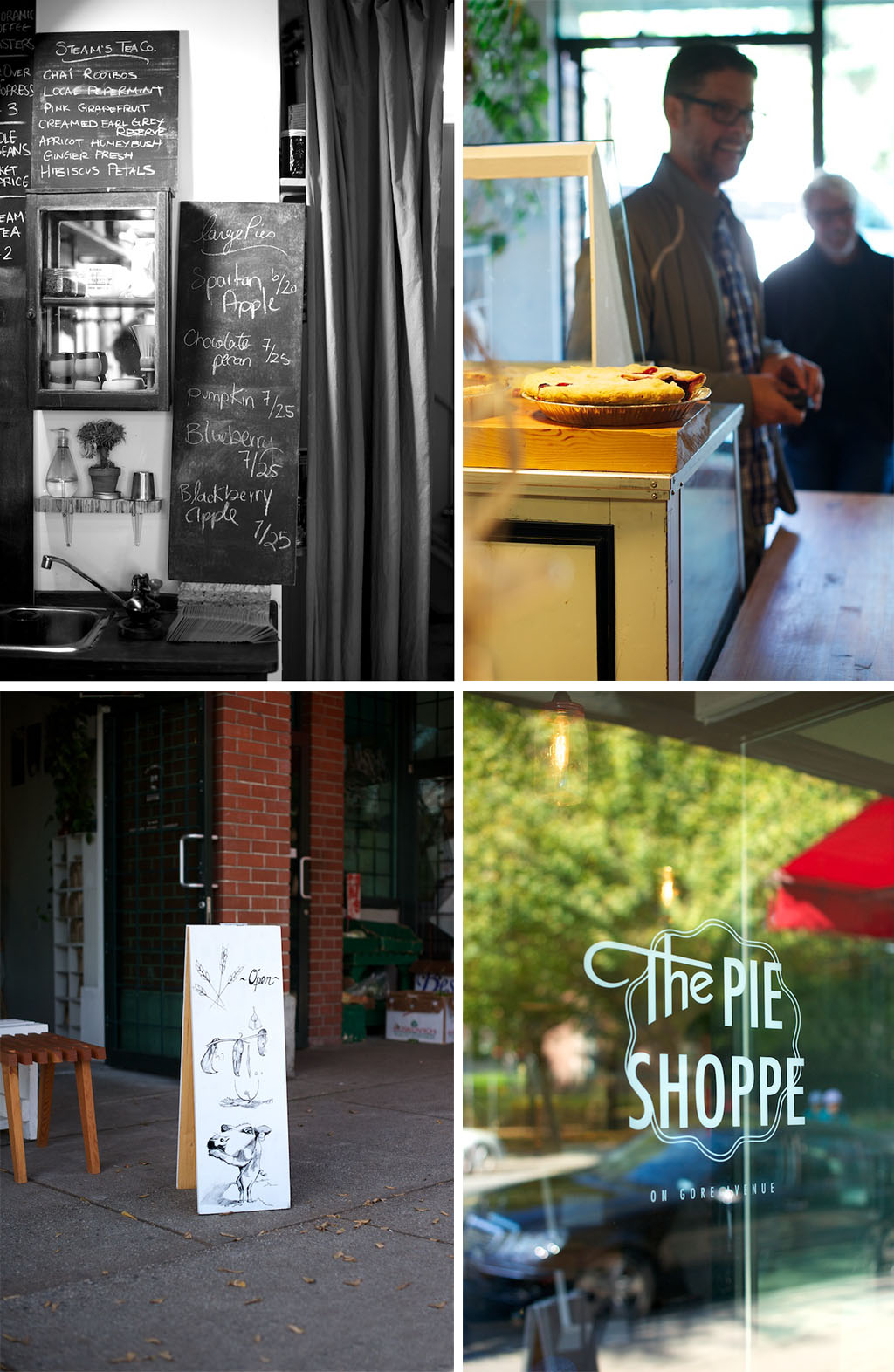 At its heart, The Pie Shoppe is a pretty simple operation, notable for its focus, rather than its reach. They don’t bake for wholesale accounts; they don’t serve espresso; there’s no ice cream or whipped cream to accompany a slice. Like several shops in Portland (Blue Star Donuts, Apizza Scholls), The Pie Shoppe operates via a sell-out method: when it’s gone, it’s gone. They start each day with apple and chocolate-pecan pies, and then bake one to five other kinds, depending on what’s in season, what customers have requested, and the availability of ingredients. 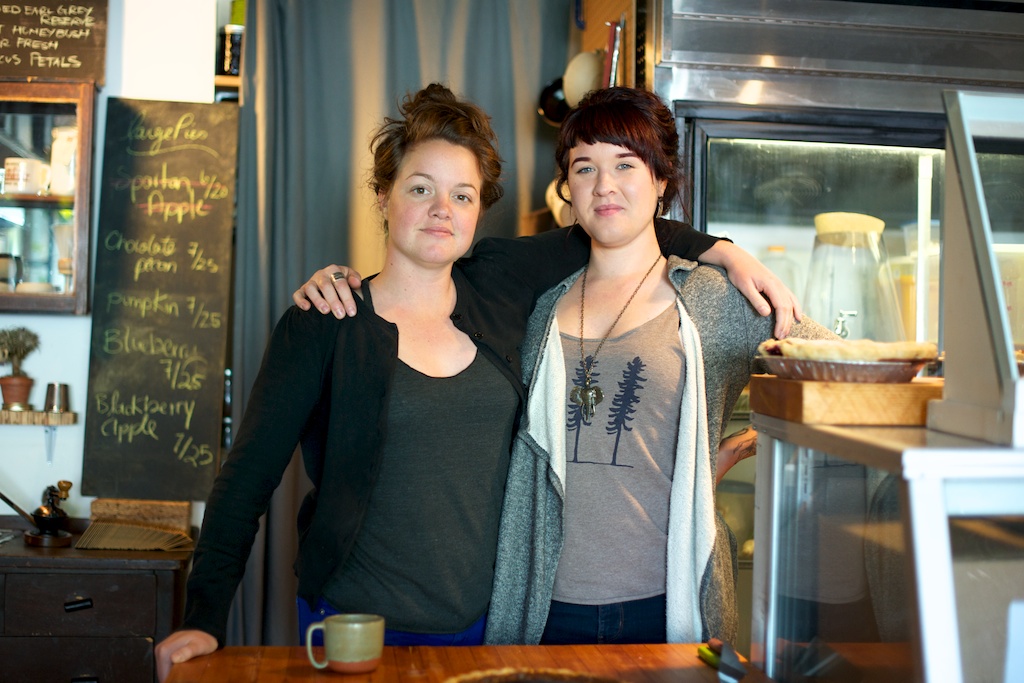 The French sisters don’t buy into their own hype. They’re proud of the community they’ve nurtured this past year, and enjoy their daily interactions with regular customers. Yet they remain down-to-earth, never assuming that their pies are life-changing or world-moving. Instead, they continue to integrate themselves into their Chinatown community in the least pushy way possible, using their personalities to disarm clients and relying on the visceral pleasure a slice of their fruit pie can evoke. The simplicity of their operation provides the framework for conversations surrounding sustainability, seasonality, and the local foodshed. And as an added benefit, their pie makes those conversations taste delicious.