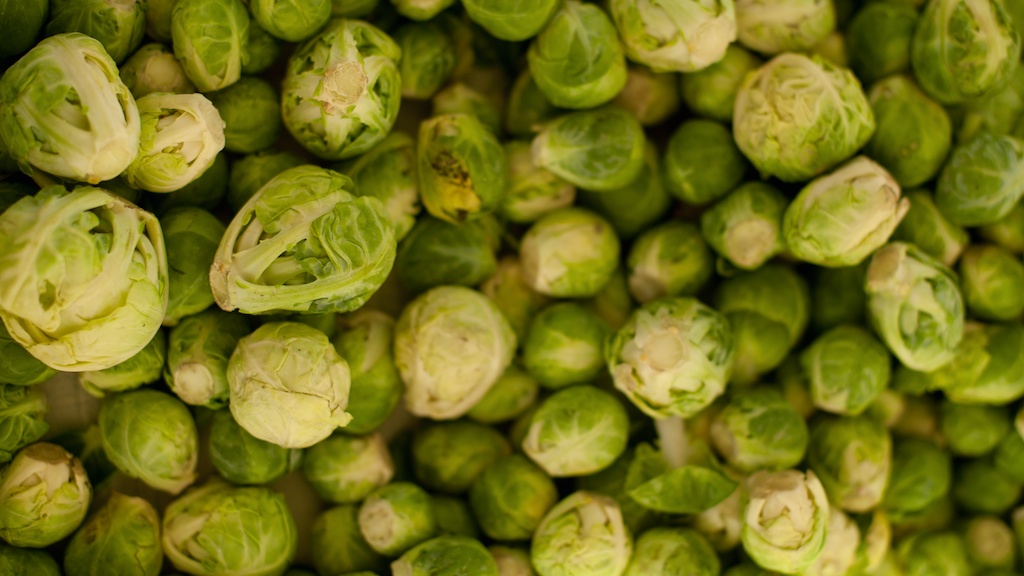 In my mind, the reason "Brussels sprouts" is capitalized is because they're some of the best vegetables around. In reality, the little green cabbages are named after Brussels, Belgium, the location where they were originally cultivated. Despite their prominent capitalization--the veggie equivalent of being named a Dame or Knight--people remain sharply polarized over Brussels sprouts. As I've mentioned before, my father hates them. I've met people who can't stand how they smell and wouldn't eat them no matter how much butter or bacon the sprouts were cooked with. 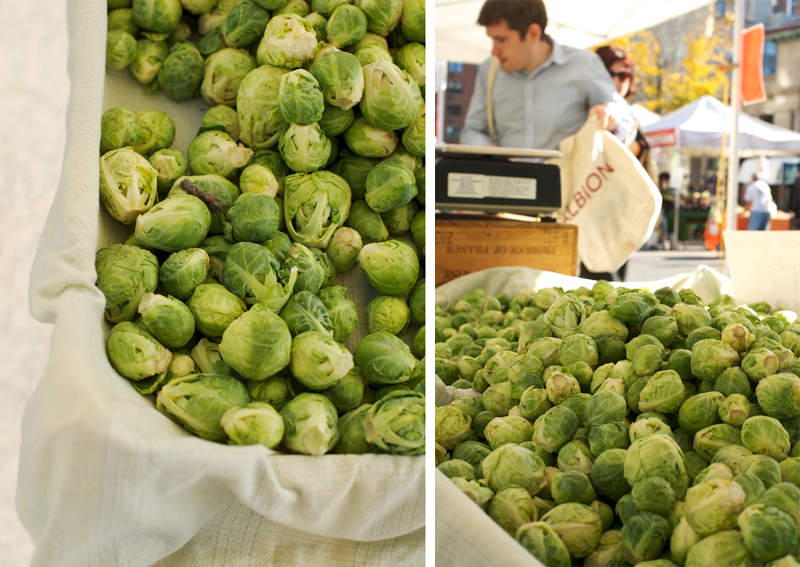 On the flip side, chefs and restaurants love them. In the Fall, sprouts are always on menus, paired with bacon or apples, sauteed with butter, and appearing with cheese as an appetizer. Earlier in the Fall, I saw Brussels sprout-concoctions dotting many neighborhood restaurants' menus, but when I tried to create a sprout-centric meal at home, the markets were picked bare. No longer! At yesterday's Union Square Greenmarket, I counted 5 farms with bins of these tiny green cabbages. Each farm's sprouts looked slightly different: like siblings in the same family, they weren't identical in shape or size, but were all very clearly related. 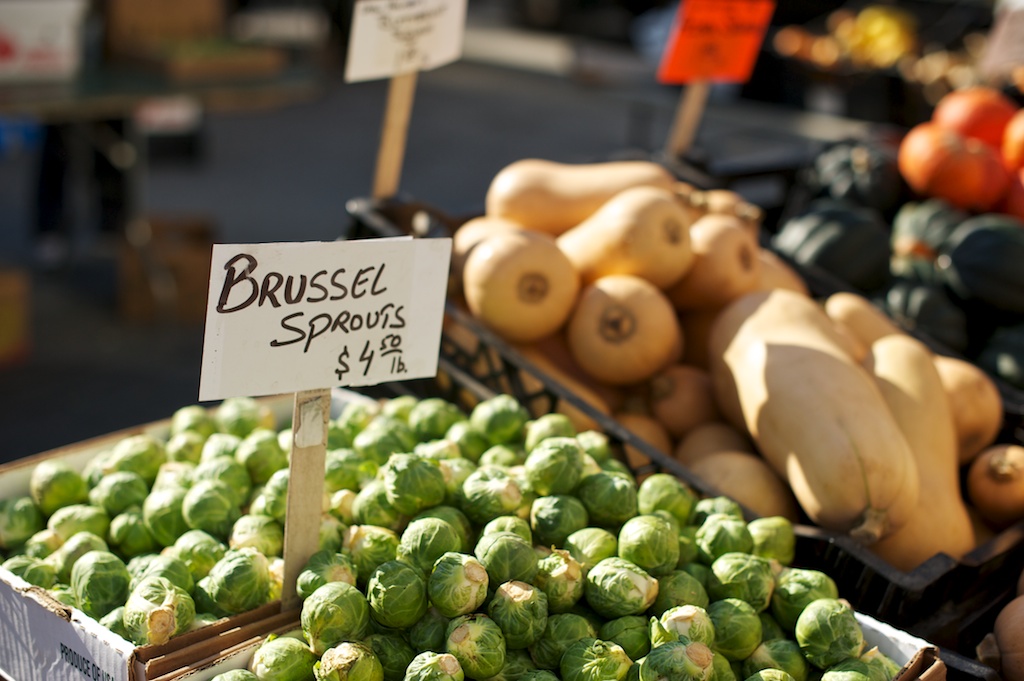 Brussels sprouts are part of the Brassica family, along with broccoli, cauliflower, and cabbage. You most frequently see Brussels sprouts heaped in bins, tumbling on top of each other. Some farms sell the sprouts in the way that they actually grow: on the stem of the Brassica Oleracea plant. Not only are sprouts on the stem beautiful to look at, it's fun to pop them off one-by-one. Of course, there's no harm if the farm has already taken care of that!

If grown and prepared correctly, Brussels sprouts taste richly sweet, with just a hint of bitterness. If you roast them until they start to caramelize, the sweetness is enhanced even further.

Choose solid, saturated-green sprouts. If you're not using them right away, wrap them in paper (wax paper works well here) and put them in a perforated bag in the refrigerator. They'll keep for up to three days.

When you're ready to cook, remove any outer leaves that seem tough or look brownish.

If you've noticed how sprouts are prepared at restaurants, you're probably clued into the fact that Brussels sprouts pair exceptionally well with bacon, butter, garlic, and apples. 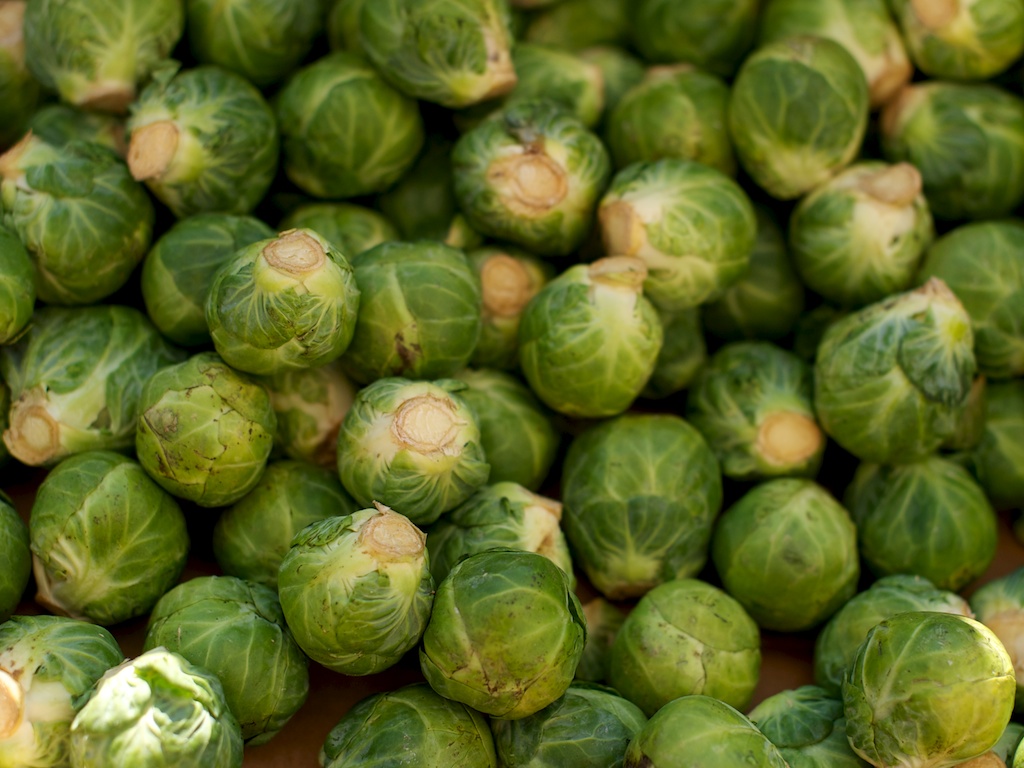 Sprouts grow best in milder, humid temperatures (anywhere between 50 and 75 degrees) and are ready for harvest around 90 days after planting. The stalks can grow as high as 47 inches! You'll find sprouts at the market starting in mid-September and ending shortly after Thanksgiving. Apparently sprouts become their sweetest after the first frost.

This person would rather cook turnips than sprouts (not there's anything wrong with turnips!)

The Brussels Sprouts gene: is there a genetic component to loving or hating them?

Battling pesticide use in California, including on Brussels sprouts