I first learned about Rucola, the new Northern Italian restaurant in Boerum Hill, in an email several months ago.  It’s not unusual for a restaurant to announce itself via email or social media, but Rucola’s announcement wasn’t a press release – it came as an aside.  The email described a new service called This Batch, which is similar in concept to a CSA (Community Supported Agriculture). 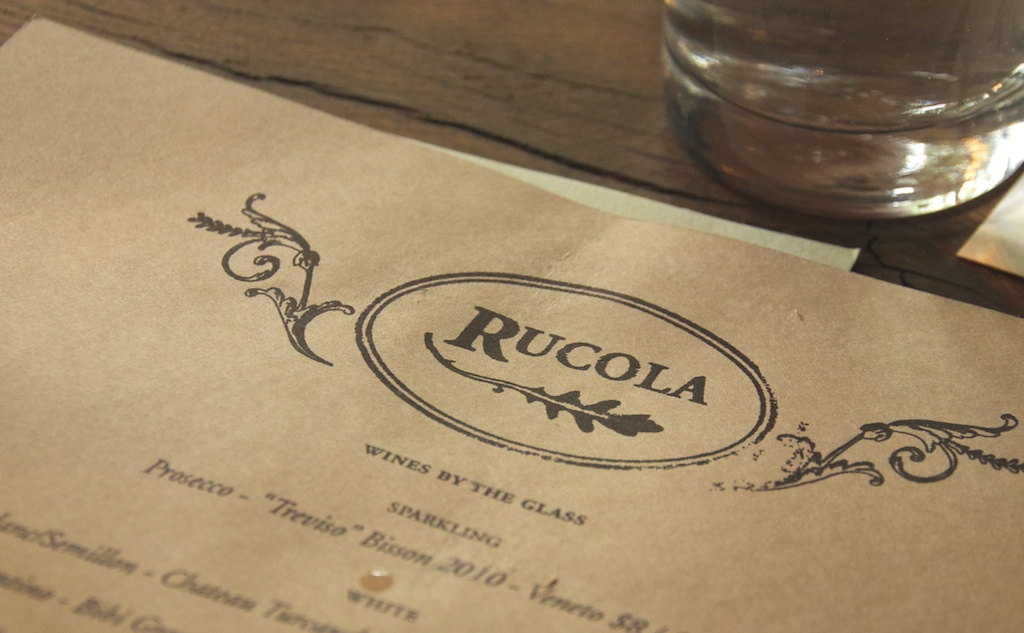 At the end of this email This Batch shared:  "We're doing this in partnership with our restaurant—Rucola Brooklyn.” I quickly clicked on the link to Rucola, but saw the restaurant hadn't opened.  Rucola established a twitter account so interested customers like me could keep track of its progress, and finally opened its doors this month.

Located on the corner of Bond and Bergen, I've walked by Rucola numerous times as it progressed from 'under construction' to 'open for business'.  Initially, Rucola only served dinner, but several weeks ago, they started their lunch service.  I was eager to see the finished space, get a feel for the vibe, and most importantly, try out the food!  Rucola's website had proclaimed themselves as a vegetable focused restaurant--and even goes as far to say that they serve 'hearty vegetarian dishes in the evening'. 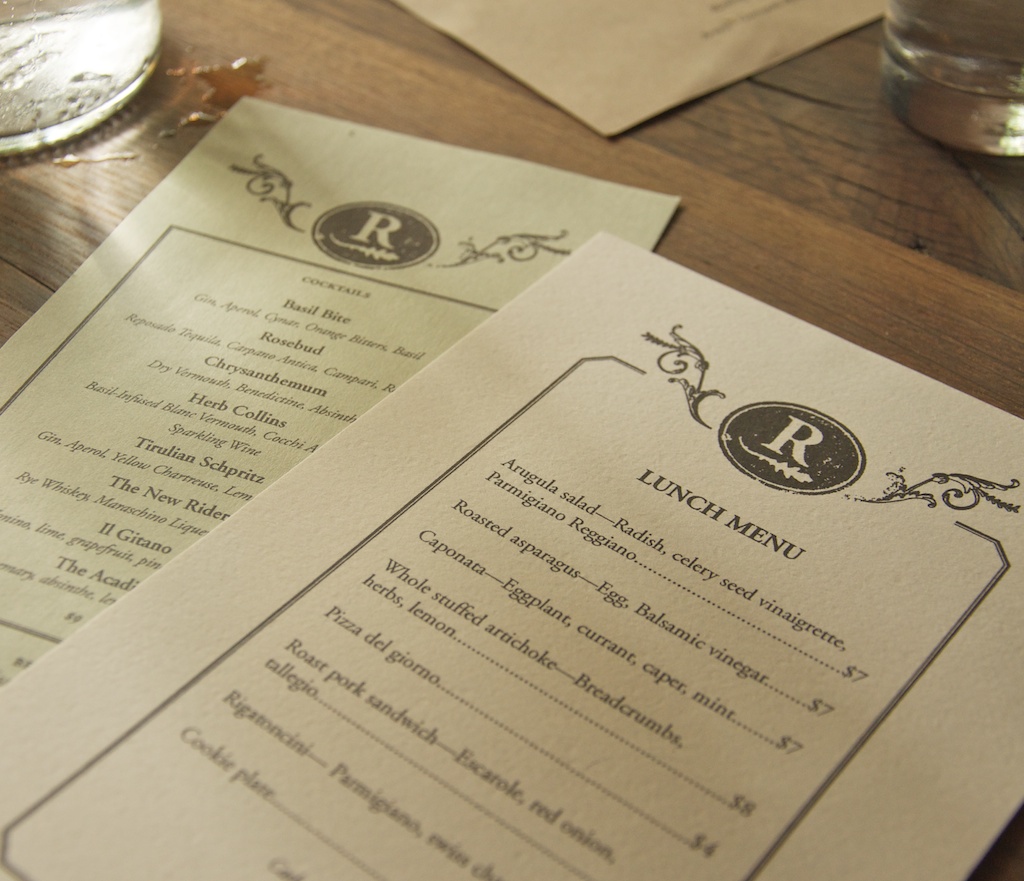 We arrived during last Friday's rainstorm.  Parts of Brooklyn become uglier in the rain, specifically 4th Avenue, which we crossed to get to Rucola.  Crossing 4th Avenue is like crossing a major highway:  traffic goes at break neck speeds, complete with constant, angry honking; you walk by and through gas stations, car repair shops, and a KFC.  Once you cross 4th, however, and traverse a few more blocks, Brownstone Brooklyn reappears.  Gas stations are exchanged for quiet, tree lined streets (with the occasional honk--these are the same drivers, after all), and the ugly rain storm transforms into a peaceful and serene shower.

Rucola is housed in a corner unit, with windows on three sides. Previous incarnations of the space included a butcher shop and an apartment. During this rainstorm, the restaurant felt like a cozy, cheery oasis--you could peer out at the umbrellas, but feel comforted knowing that you were dry inside, sipping a glass of bubbly limeade or in Justin's case, a glass of Nebbiolo rose. 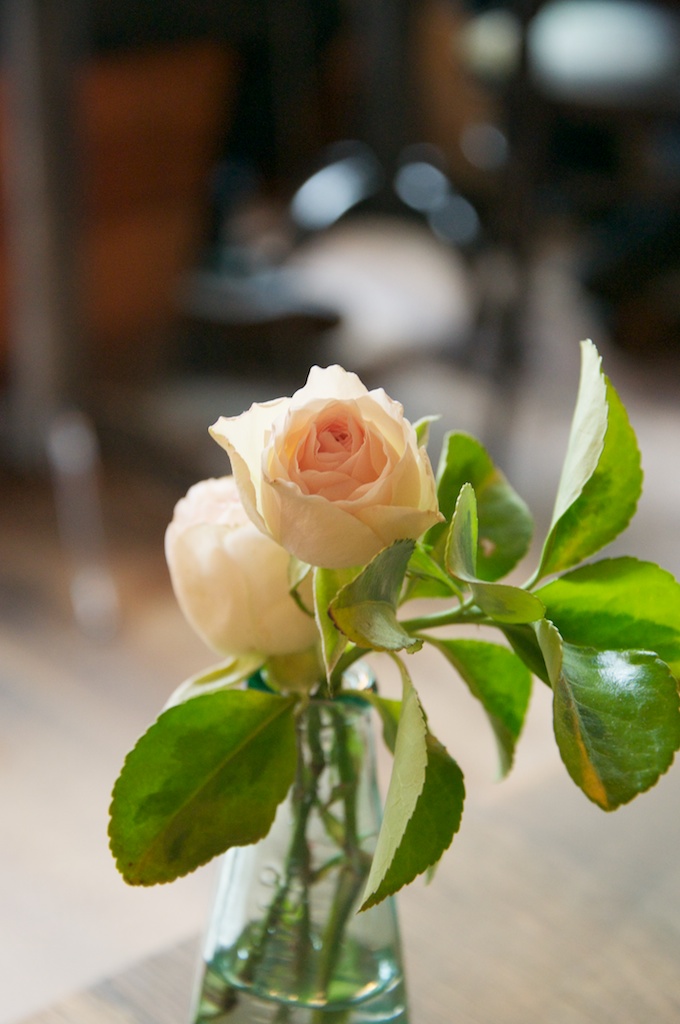 The interior features two amazing corner booths by each front window, a long farmhouse table in the center with a mason jar chandelier hanging above it, a small bar, and a back wall of tables and chairs that can accommodate 2 or 8, depending on how they're arranged.  After scanning the menu, I was happy to see numerous vegetarian options (though the roast beef sandwich that sailed by us smelled heavenly).

We settled on a whole stuffed artichoke ($8), roasted asparagus with eggs ($7), and two slices of their pizza of the day--marinara with mushrooms and olives ($4). 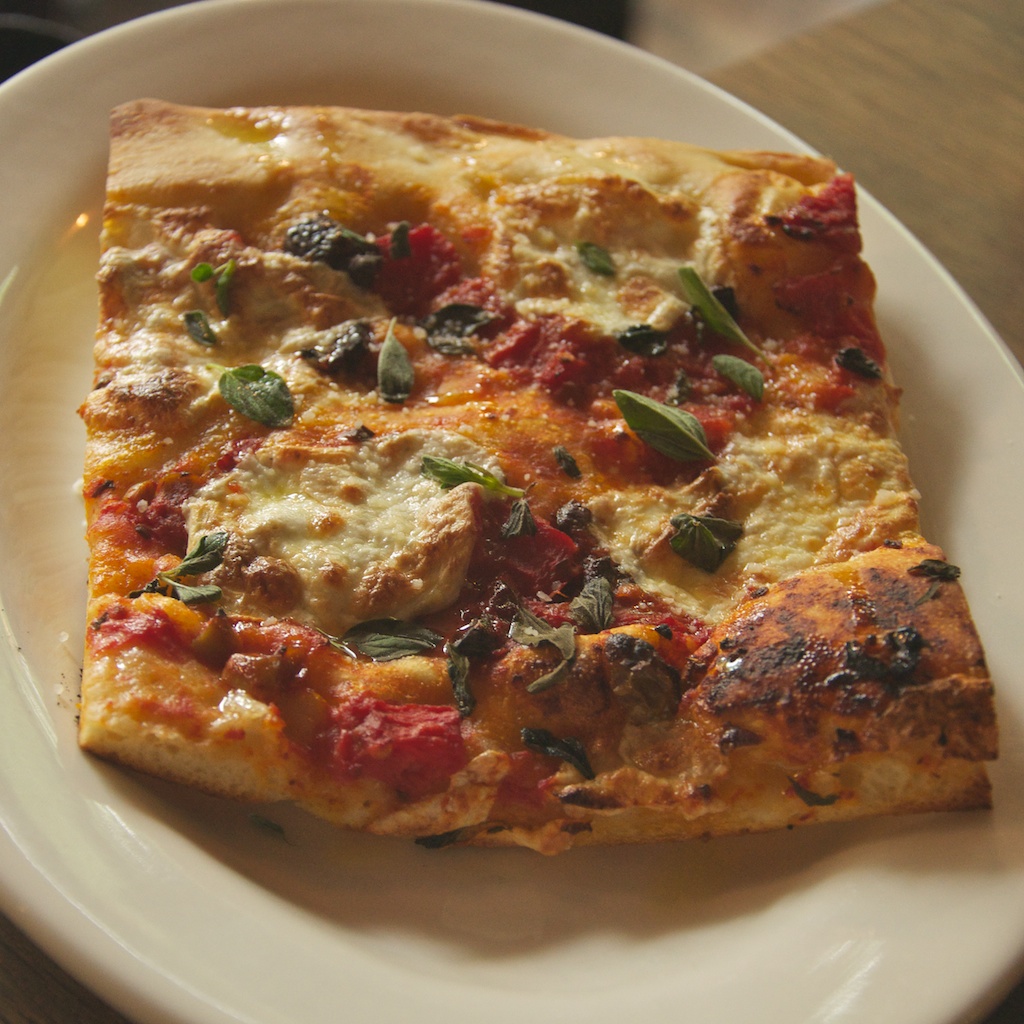 While waiting for our food, we chatted briefly with Rucola's owners, Julian Brizzi and Henry Rich.  They reiterated that they've conceptualized Rucola as an ingredient focused neighborhood restaurant, where vegetables aren't forced to take a back seat.  A few weeks ago, they'd traveled to upstate NY to forage for ramps, which were included in the first collection of vegetables for This Batch.  Rucola grows many of the herbs they cook with, but unfortunately, a few plants were wiped out during one of the recent rainstorms.  Both Julian and Henry were warm and friendly, and seemed genuinely pleased each time a new face walked in for lunch. 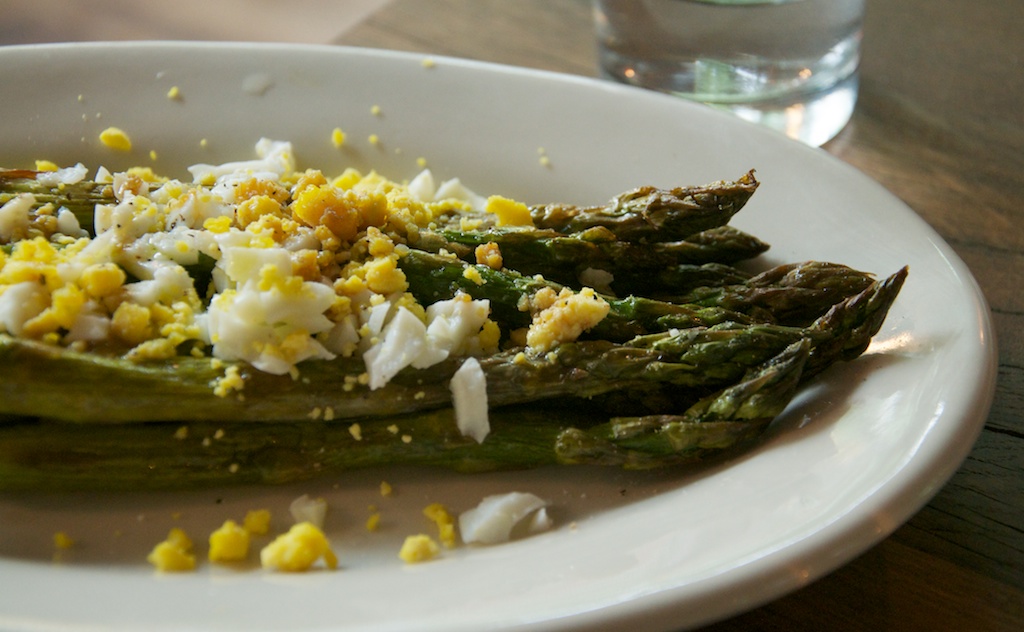 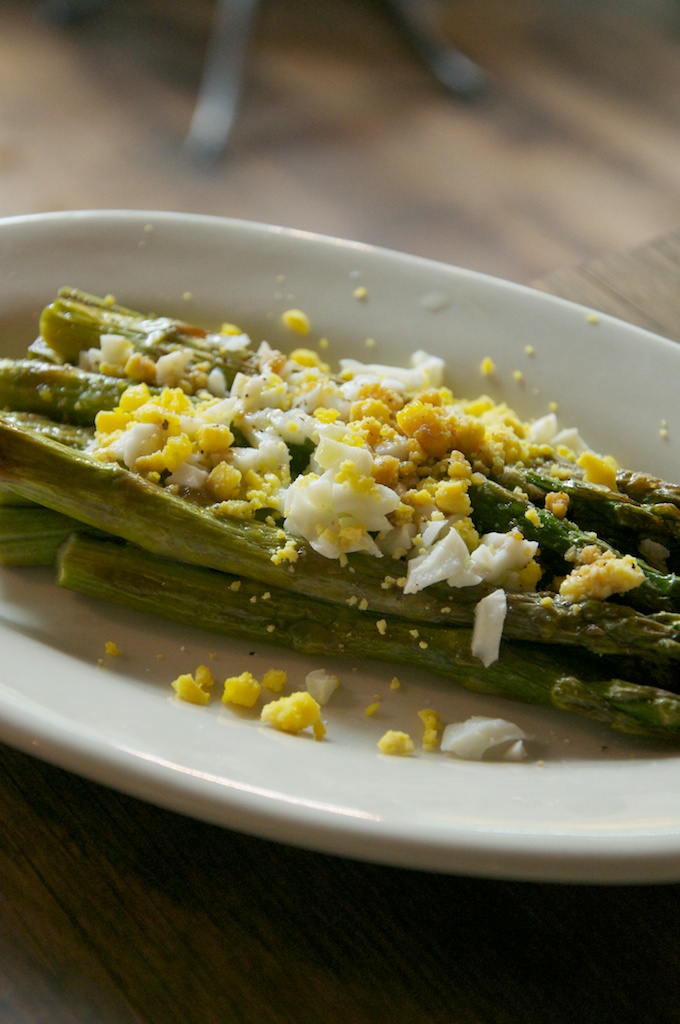 As far as our food:  delicious.  I wish lunch could always be as leisurely and varied as this one was.  There's something so decadent--in this country, at least--about taking an hour to linger over a variety of foods and a glass of wine.  All of our food arrived at once, so we took turns trying everything.  The roasted asparagus was served cold, with the asparagus' tips as sweet as could be.  After a slight battle with the artichoke, involving accidentally eating a sharp leaf and paying the price, I was able to enjoy the breaded artichoke leaves. 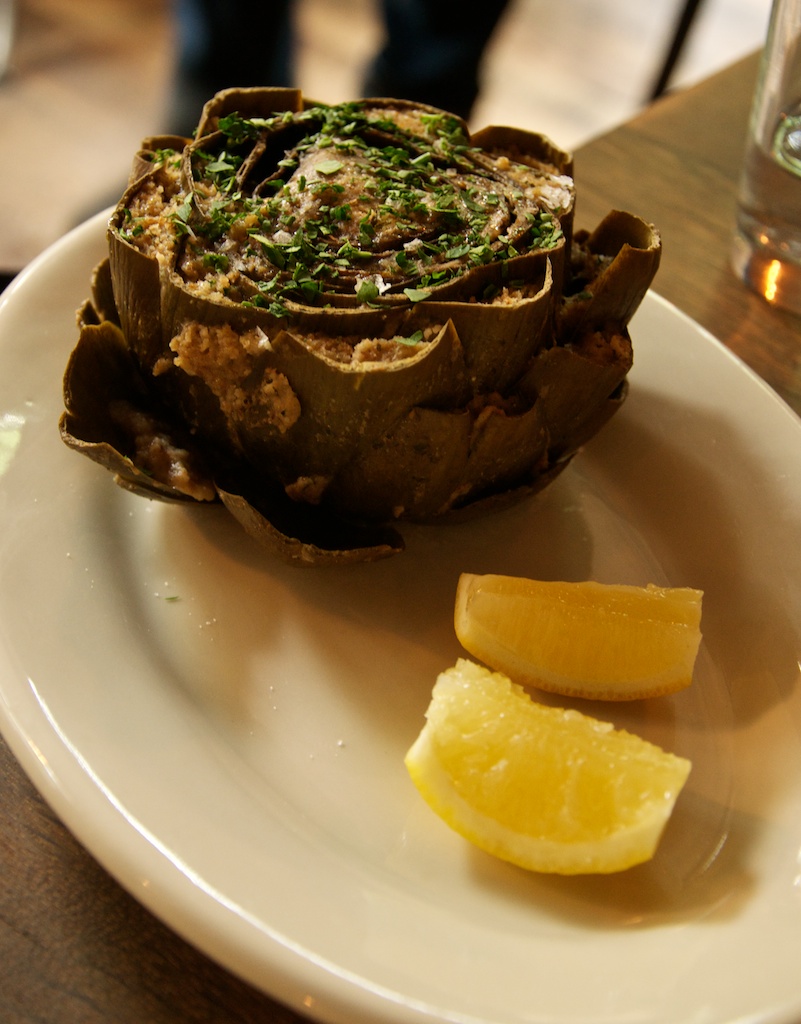 As good as these side dishes were, the pizza was the item I'd return for.  After smelling the freshly baked pizza bread behind me at the bar, I think I would have been happy with the bread alone--but the topping, which switches frequently, was the perfect melding of olive and tomato sauce.  The pizza filled me without being greasy or queuing the need for an afternoon nap.

Vegetarian Options: Pizza, seasonal side dishes (will vary depending on the seasons)

A note about This Batch:

This Batch is similar to a CSA (Community Supported Agriculture).  If you've ever participated in a CSA, you know that the benefits – incredibly fresh produce every week, the knowledge that you’re directly supporting a farm’s finances – also come with a pretty serious drawback: you’re often saddled with more greens and kohlrabi and potatoes than a family of 2 (in our case) can eat… and unfortunately, some of this weekly produce ends up wasted.

This Batch aims to take the benefits of participating in a CSA and offer more choice and less waste.  They're just getting started, but when you sign up, you'll receive an email each weekend sharing "what's fresh off the farm for the next week".  Using this information, you can pick a single portion or family sized portion, allowing farmers to bring the correct amount of produce to the city--and giving you the amount you need to enjoy, but not waste, the food.