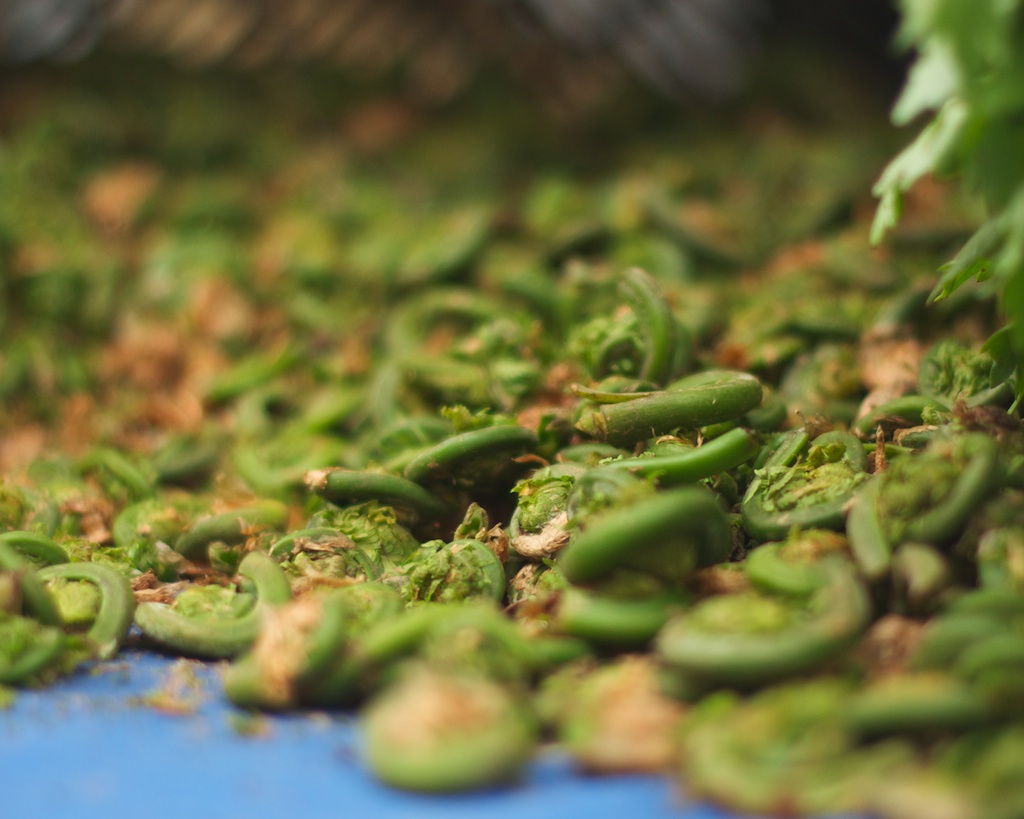 I remember thinking that the fiddleheads' unique taste and dense texture were a suitable contrast to the other vegetables in that stir fried dish.  This year, while tempted to take the easy route and make another stir fry, we wanted to challenge ourselves:  what else could we make with fiddleheads?  One of our cookbooks lists an amazing sounding recipe for sauteed fiddleheads, snap peas, and carrots, but carrots aren't at the market yet.  Instead, we settled on adapting The Kitchn's recipe for Risotto with Asparagus and Fiddleheads. 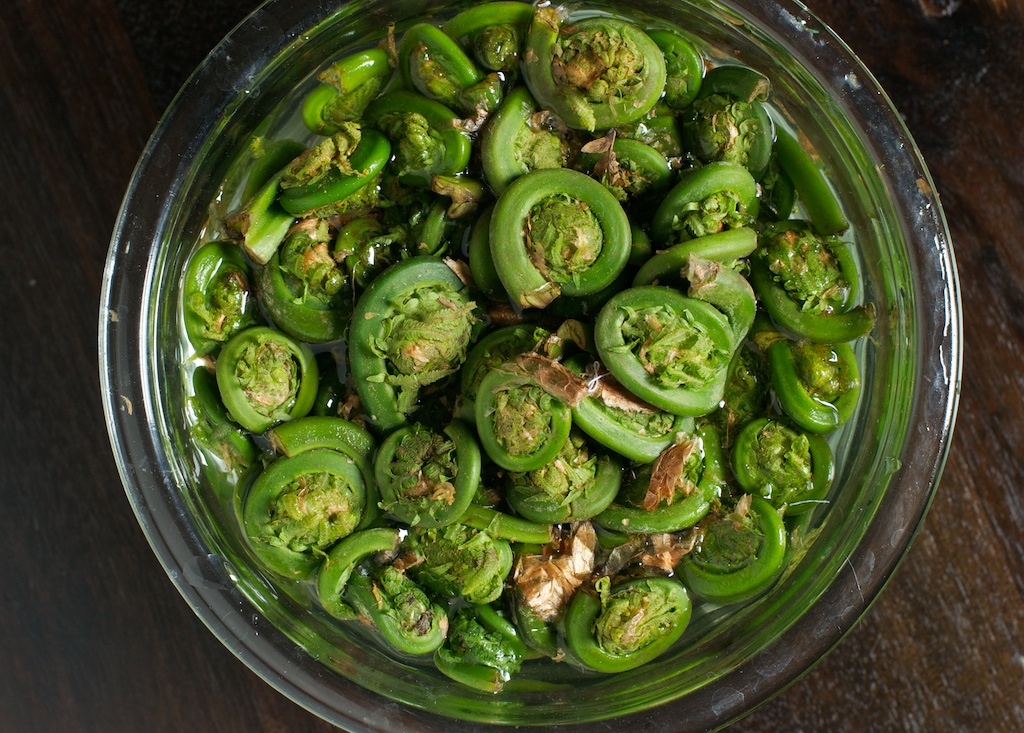 Our version of this risotto eliminates the leeks and scallions, replacing them with an onion.  We love the tanginess of pecorino romano, so we added that cheese instead of parmesan.  Finally, we cooked with the whole asparagus stalk, instead of the suggested asparagus tips. 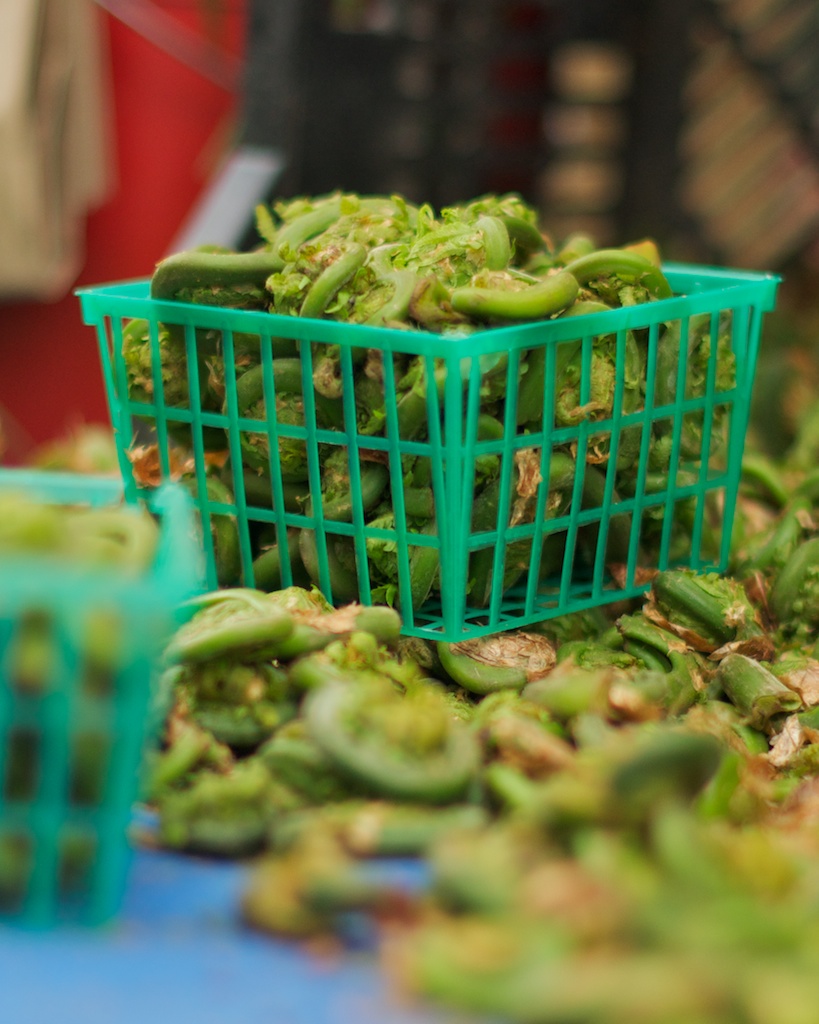 Our creamy risotto melded pleasingly with the asparagus and uniquely with the fiddleheads.  Unlike in a stir fry, risotto doesn't mask the fiddleheads' flavors.  Fiddleheads are bold and demanded our attention with each chewy bite.  This risotto presents a lovely spring taste, but upon reflection, we would cook the fiddleheads even more before adding them to the risotto, attempting to make them softer and less chewy (I've included this adaptation in the recipe).  Though we haven't tested this, if we cooked this dish again, we'd even recommend experimenting with sautéing the fiddleheads in butter before adding them to the risotto. 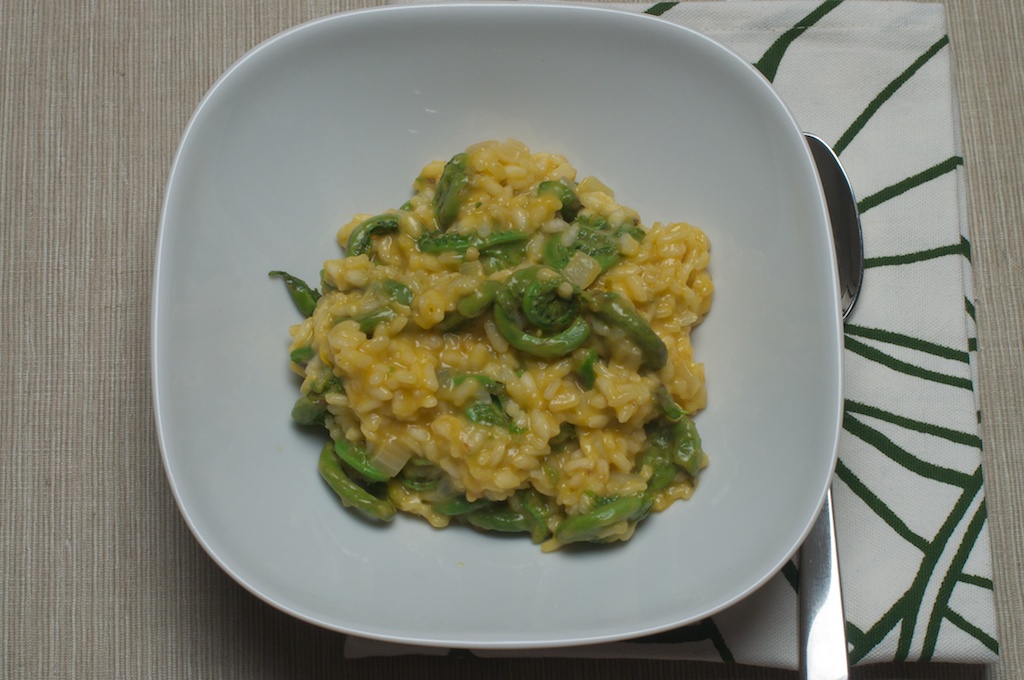 1 1/2 cups asparagus (woody ends snapped off, cut in half)

2)  Heat the oil and butter over high heat in a dutch oven or heavy bottomed pot.  Saute the onion and garlic for 3-5 minutes, until tender.

3)  Add the rice and cook until the grains start to soften (3 minutes).  Stir in the wine.  Then, add the vegetable stock and water, a cup at a time. After each addition of stock or water, stir until the rice has absorbed the majority of the liquid. When most of the liquid has been absorbed, add the next cup of liquid.  *This whole process will take roughly 30 minutes.

4)  After the last liquid addition, stir in the vegetables and lemon zest.  Combine before adding the cheese.  Enjoy!