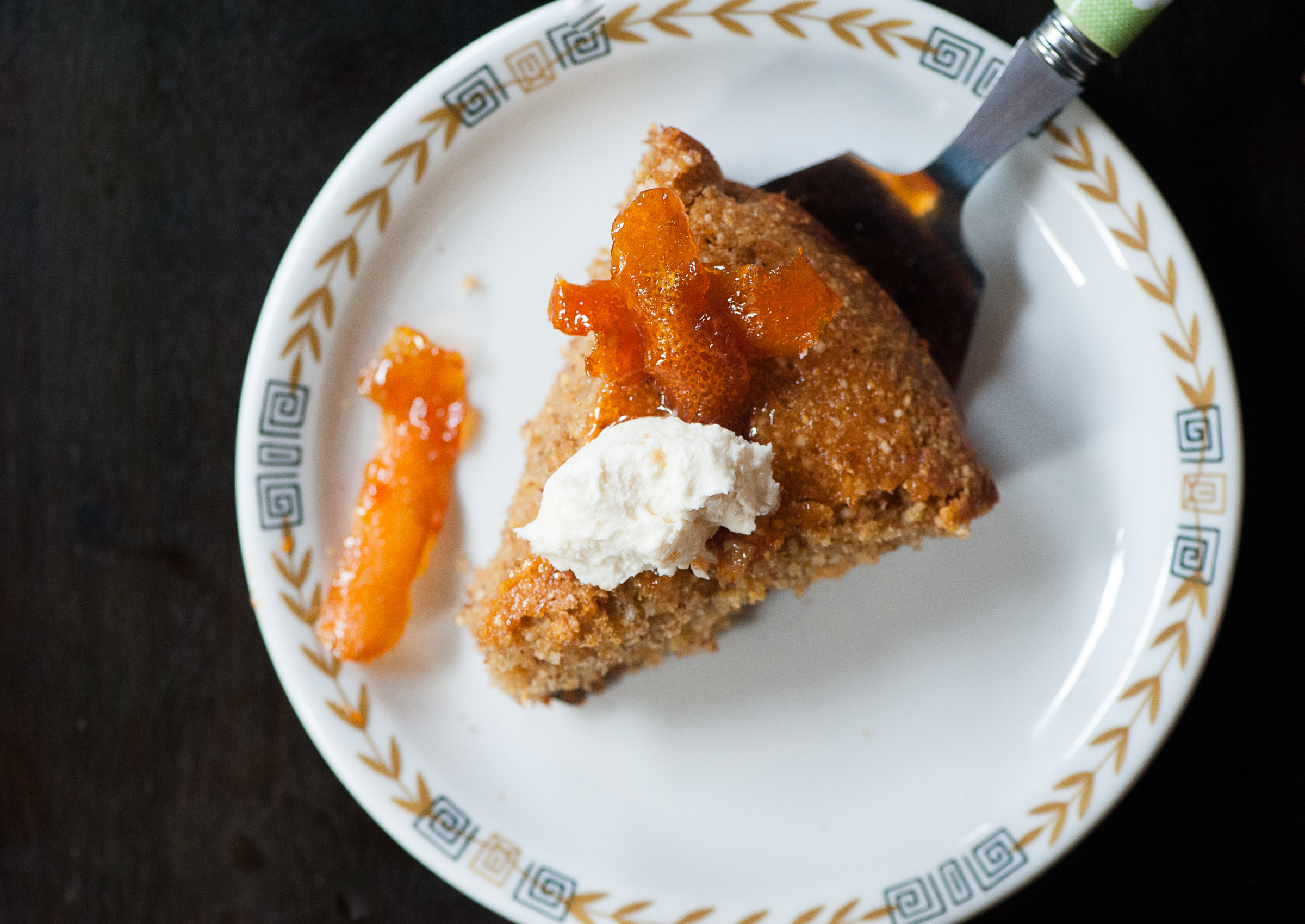 Besides a week-long stretch when I was sick and lay on the couch watching the entire first season of Grey’s Anatomy, The Great British Bake Off is the closest I’ve ever come to obsessively binge-watching a tv show. Each time an episode ends, I strongly contemplate staying awake just so I can watch a collection of Brits stand in a nostalgically decorated tent and construct biscuit towers, 20 layer cakes, esoteric pastries that absolutely no one has heard of, and intricately designed sugar work.

Every episode is structured around general themes like biscuit, pastry or caramel and broken into three bakes, at the the end of which the judges – orange-hued Paul Hollywood and slim-jacketed-and-jean-trousered Mary Berry – select a contestant who “will not be joining us in the tent next week”. An elimination from a cooking show is pretty standard fare, but what follows the elimination announcement is anything but: the contestants, judges, and hosts all gather around and hug, often with tears in their eyes. These hugs aren’t quick squeezes, but instead, deep, lingering hugs, the kind you might give a loved one who just returned from a tour of duty. The first time my husband and I saw this spectacle, we turned and gaped at each other, shocked at this gentle and touching end to the first episode of a baking show.

Despite being an almost nightly home cook and slightly obsessive baker, I don’t watch many competitive cooking shows. Cooking competition programming tends to follow a similar script. The contestants range from incompetent, to hot-headed and melodramatic, to – if the viewer is lucky – quietly competent. As the camera swoops in on the latest GE appliance, in the background the contestants chop vegetables with blindfolds on or with a hand tied behind their back, perhaps navigating a challenge where the only seasoning can come from a powdered mix of Hidden Valley Ranch. 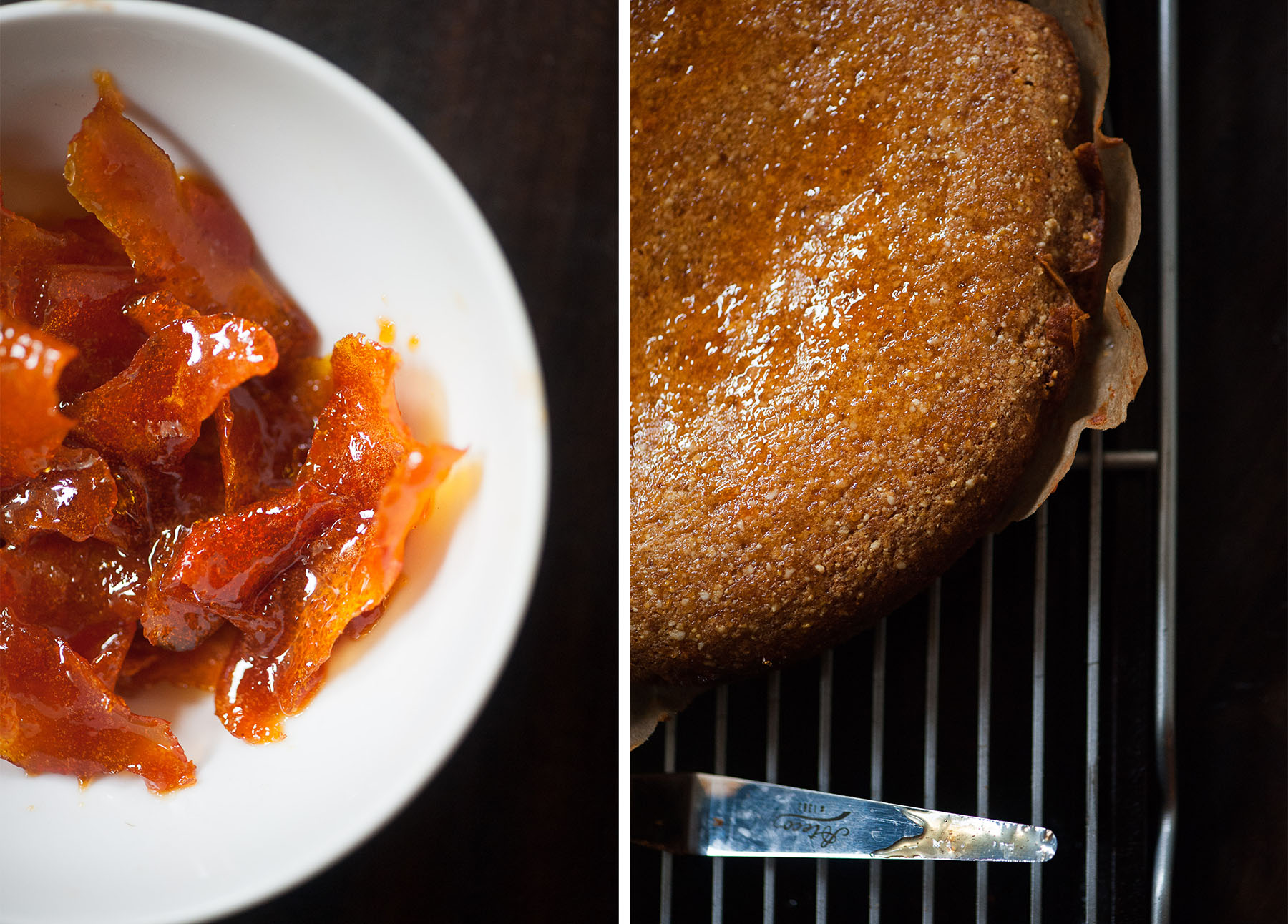 I know all this because, despite abstaining for several seasons, I’m back to watching Top Chef. I became re-acquainted last year when Top Chef: Boston prominently featured two inordinately likable Portland chefs, Gregory Gourdet and Doug Adams. These men are opposite in a number of easily apparent ways: Gourdet is a tall, lanky, gay ultra runner with a devoted social media presence; Adams is short and scrappy, with a dream of moving to Montana to fish. Yet, despite their big and small visual disparities, they’re both gentle and beloved – both in Portland, and on the show. Frequent givers of hugs, Gourdet and Adams elevated the Top Chef experience, and in a finale between them and one other contestant, I found myself rooting for a double winner – a desired outcome for which I rarely wish.

Top Chef: California has returned to the reality tv standards of crying, accusations, and an almost “bro-club” atmosphere. I couldn’t quite understand my own viewership until I realized I’m watching it as a contrast to the Great British Bake Off. 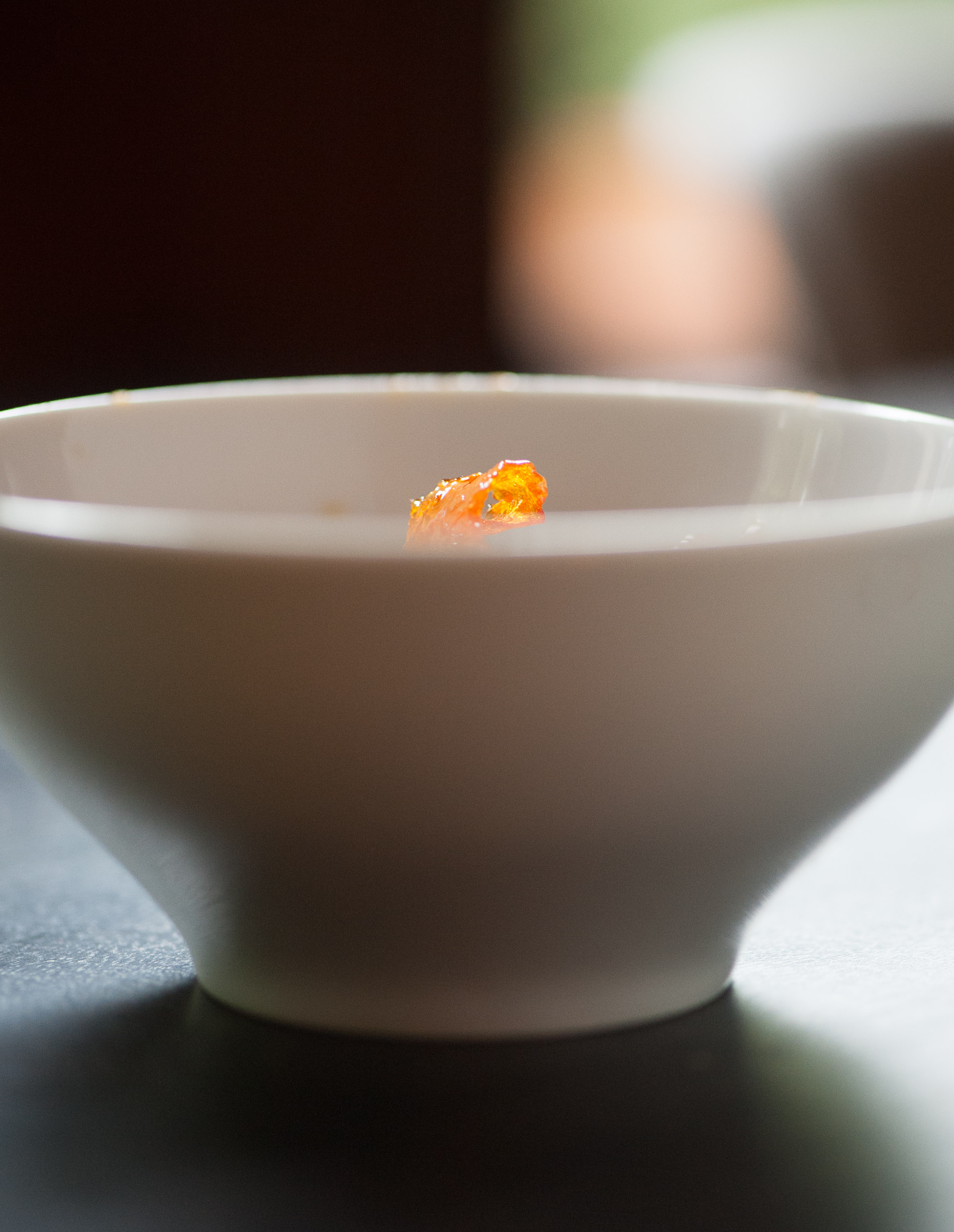 The Guardian’s Charlotte Higgins writes that The Great British Bake Off, now casting for its seventh season, “may be the perfect show for Britain, now", elaborating that British citizens “exist in a world where the difficult words ‘Great’ and ‘British’ cannot safely be applied to much. But they can be applied to a baking contest.” GBBO is a national phenomenon in England: my best friend lives in Cambridge – and in fact, her husband was in the final rounds to become a contestant on the latest season – and has shared with me how obsessed everyone is with the show. It’s what you do on a Wednesday night in the fall, and then the next morning, you scan websites and newspapers for discussion and gossip.

In a way, this report only solidifies the show’s appeal to Americans. Competition shows aren’t new to England or to America – many of our favorite competition shows have English origins, such as The X Factor, Dancing With the Stars, and Who Wants to be a Millionaire. But from an American perspective, the idea of an entire country united around a baking show is quaint and adorable, further solidifying the charming nature of the show, and cementing America’s general love affair with all things stereotypically British. 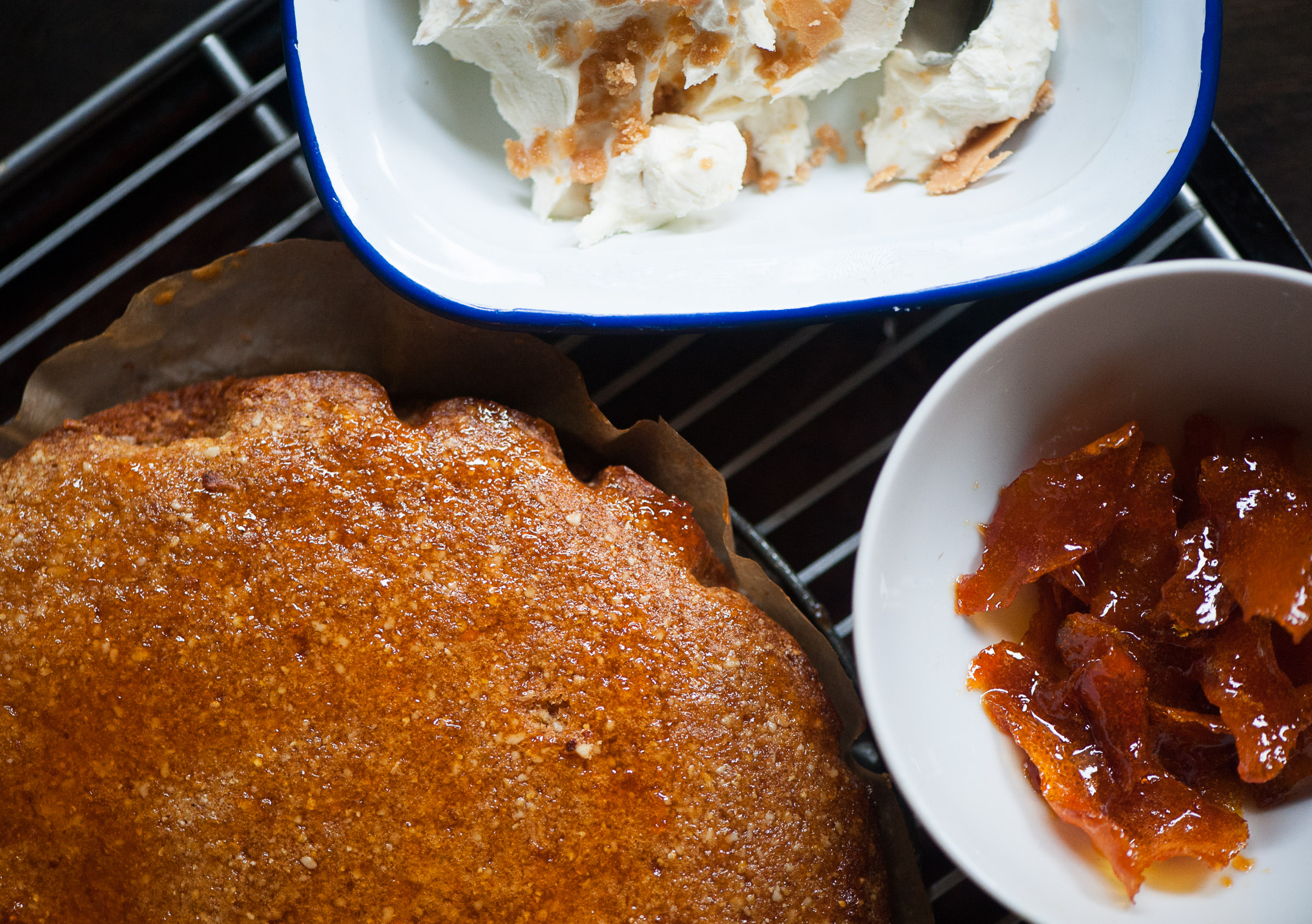 America is too broad, varied and stratified a country to be united around a single show, though occasionally certain shows have come close to this phenomenon, including American Idol at its height. But watching American Idol never made me feel warm, cozy, and comforted. Instead, it fueled my inner competitive, and judgemental, nature; for a college student (as I was whenn I watched), the show’s appeal came from watching people look ridiculous.

The Bake Off strives for no contestant to ever appear laughable. Given the nature of the three bake episode, if a contestant fails miserably on the first bake, there’s potential redemptioin right around the corner, or, if not that, there’s always the contestant standing directly behind at their softly painted lust-worthy baking station to offer a cup of tea or an extra hand (unless the challenge is for Baked Alaska, of course!).

This humor and kindness in the face of teetering eclair towers is fostered by the hosts, Mel and Sue, best friends who somehow toe the line between eye-rollingly silly and hilarious. These women root for the contestants’ success, and as they roam the tent, offering a hand or a quip or a ridiculous face, the atmosphere remains at a friendly and focused equilibrium. The contestants want to win, but they want to win on their own merits, not by grinding someone else down. And when they do win, there’s rarely a fist pump or a shout of joy (or a chest bump, a frequent sight on Top Chef). Instead, the contestant offers a simple head nod or smile, while the others gently pat him or her on the arm. When they lose, it often appears as if the eliminated contestant wants to comfort everyone else, with phrases like: “it’s okay” and “it’s fine”. 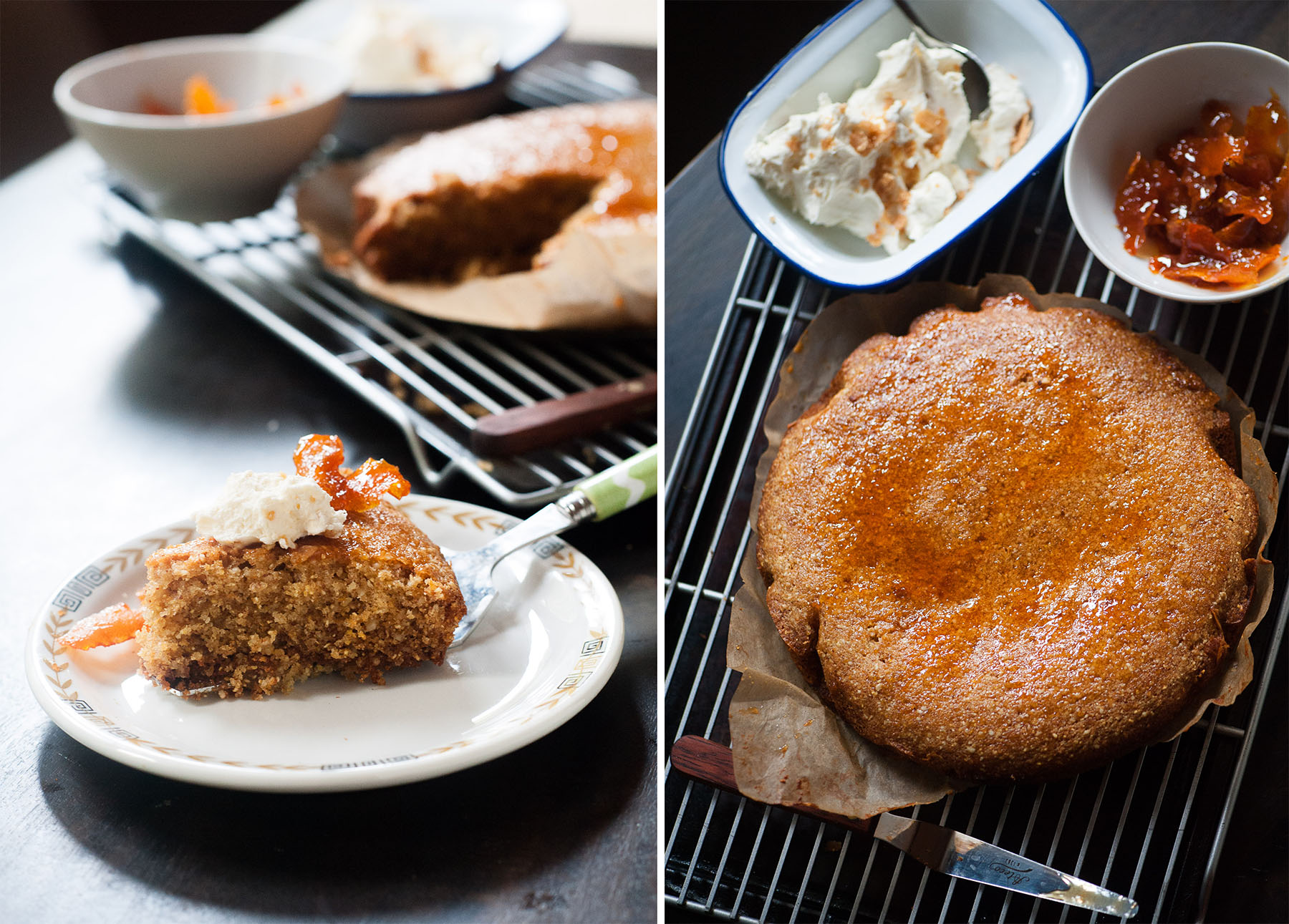 As in any competition, theres agony in defeat, but in watching a recent episode from Season 4, I couldn’t help but have tears well up in my eyes, not for the eliminated contestant, but for a contestant who remained, who couldn’t help crying for the eliminated contestant, sharing how he hates to see others leave. I’m drawn to the show for precisely this factor: the idea that people can excel (and for sure, certain contestants certainly do, in beautiful and insane ways: consider one contestant’s bread sculpture in homage to Cecil the Lion!) while retaining the best of themselves, sipping tea with dignity in the most stunning of locations, surrounded by buttercup fields and bleating lambs. The Great British Bake Off comforts me in ways that only the most decadent macaroni and cheese could, but only if I were eating a bowl of it while wrapped in the softest blanket imaginable and simultaneously viewing YouTube videos of baby goats jumping into the air.

My favorite Bake Off contestant competed on the most recent season (Season 6). Because this season hasn’t yet aired on PBS, I won’t say much about this contestant, including how far he went in the competition or any specific challenges. But suffice to say, Tamal encapsulated the best of GBBO: his artistry was matched only by his humor, wit, and good nature; all of England seemed to fall in love with him when the season aired. On one episode early on in the season, Mary and Paul tasked the contestants to bake without traditional flours or sugars. Tamal created one of my favorite kinds of dessertsL a nutty polenta cake, with the added intrigue of citrus syrup and peel. 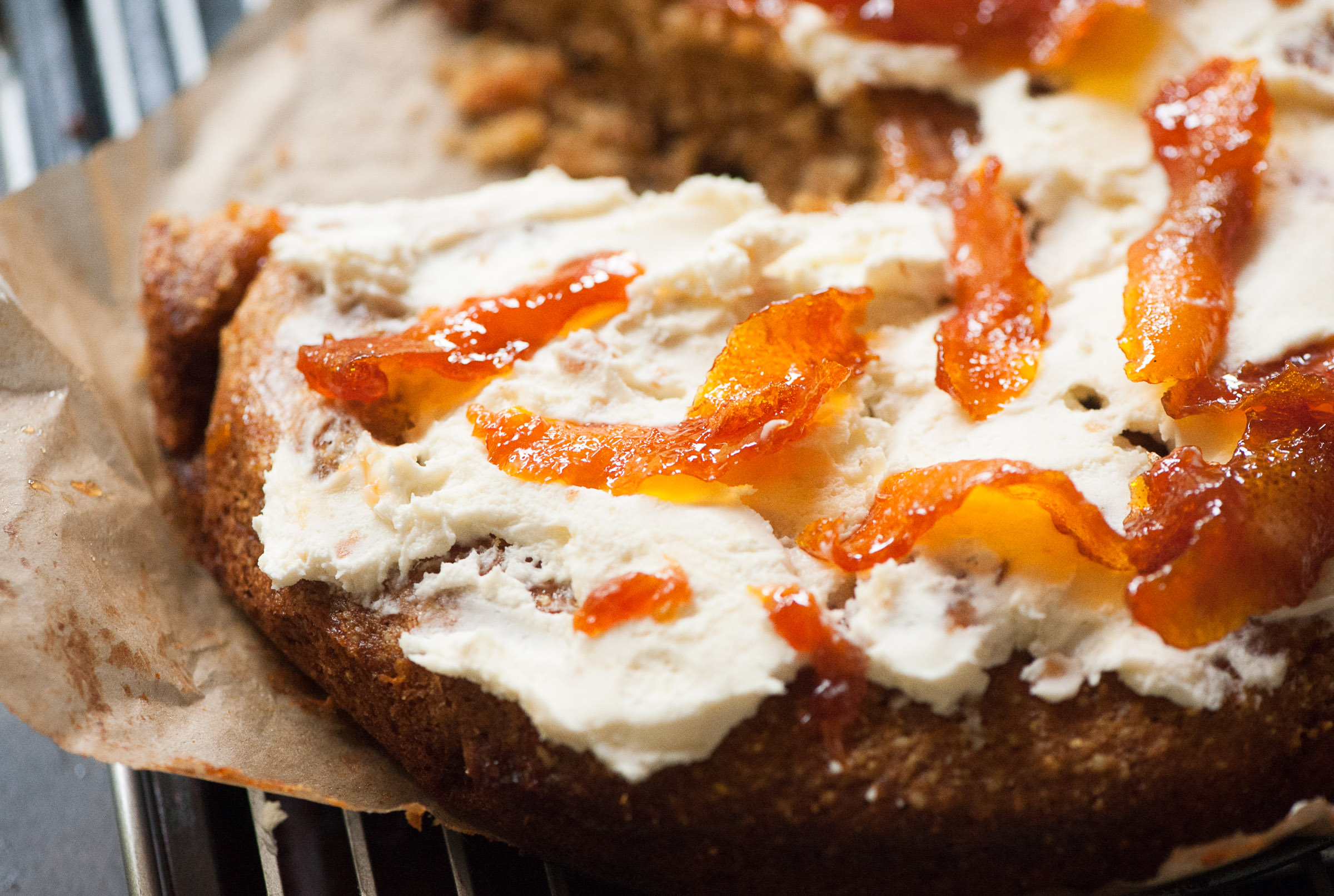 The BBC publishes most of the contestants’ recipes after each show airs, so a quick Google search directed me to his recipe, and a few days ago, channeling my inner Tamal, I made the cake. While I didn’t offer inspired jokes or flash deep, gentle eyes at a nonexistent video camera, I did create a cake that might have satisfied Mary and Paul (hopefully avoiding the critcism that my cake had an “underdone bottom”). Although I have no camera recording my exploits, nor cleaning elves to whisk away my tools, watching the GBBO has had a positive influence in my own home kitchen. The last few times I’ve baked, I’ve found myself operating more gently, both with the ingredients and with own inner dialogue.

And I now begin each home bake with a rousing cry of “Ready, Set, BAKE!”

For the citrus syrup

For the candied peel