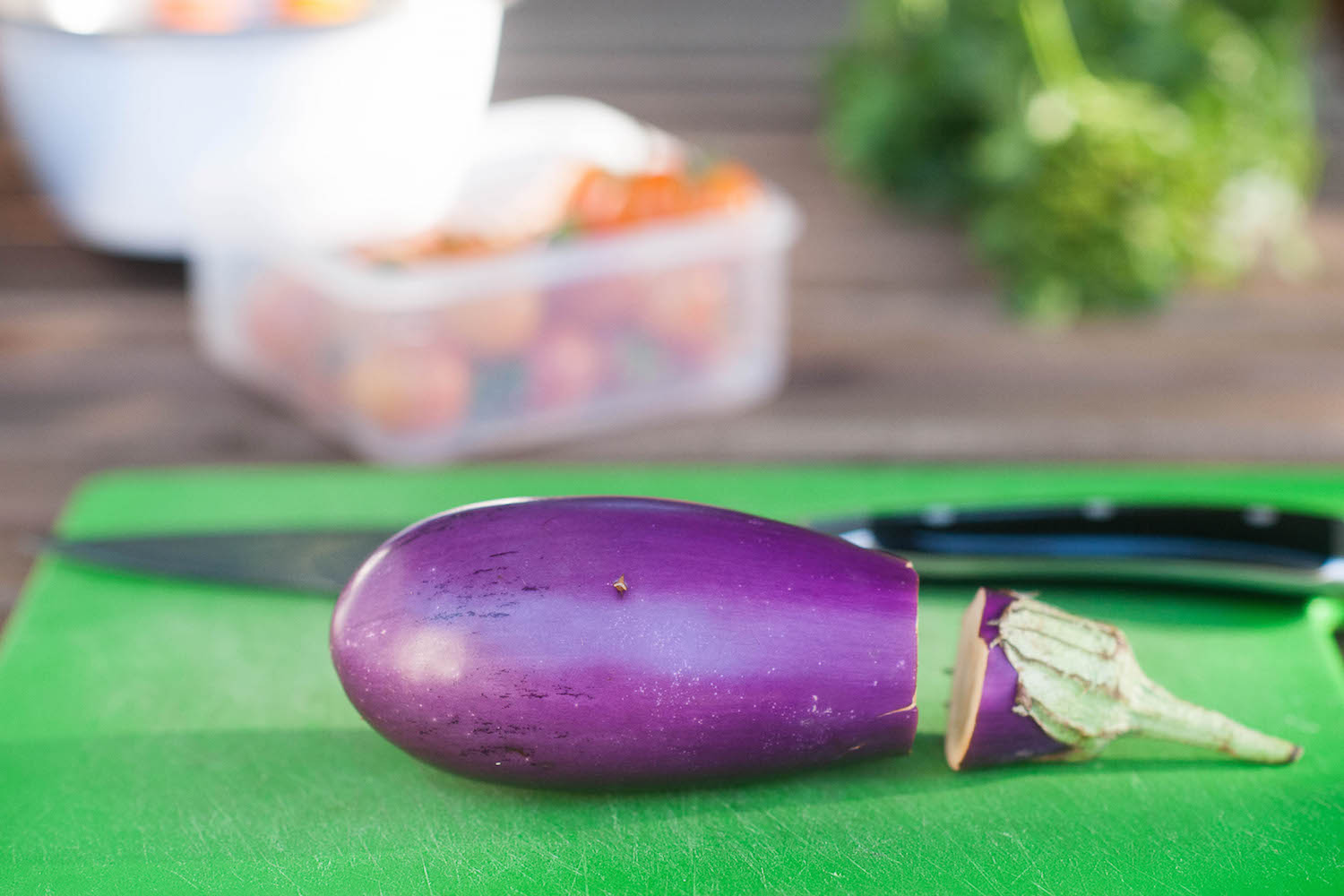 Around the fifth time we dropped a few pounds of eggplant into our red market basket, we paused and took a closer look at our selection. We always buy globe eggplant (or if available, fairytale) each August for several recurring dishes. For the past three summers, a muggy August night wasn’t complete without heating up the house even more to make Frankie’s Eggplant Marinara or Ottolenghi’s corn polenta topped with stewed tomatoes and eggplant. But beyond seeking out eggplant specifically for those two dishes, we’ve rarely bought eggplant in the eager, slightly impulsive way we buy tomatoes, corn, or peaches. 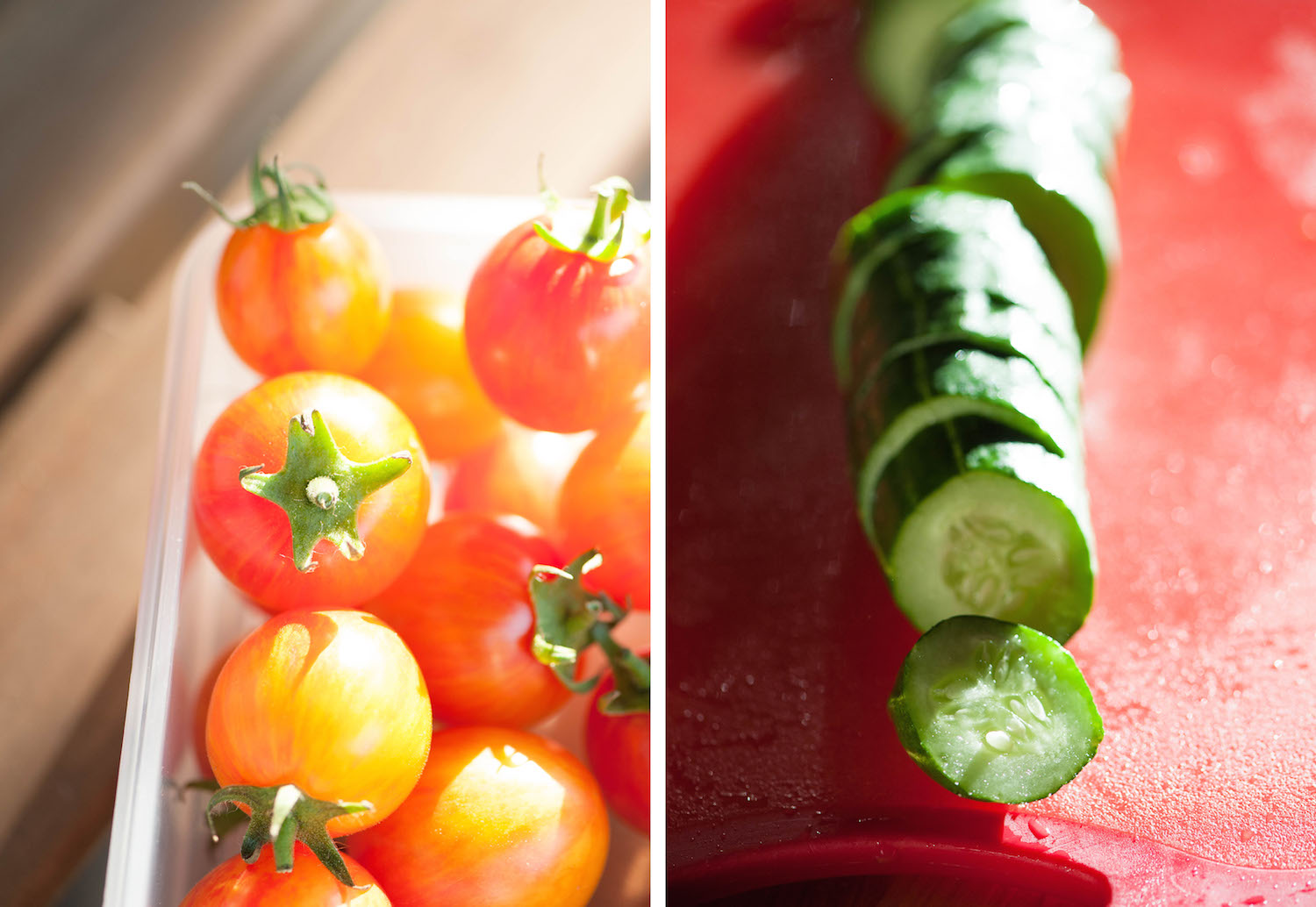 Yet this summer, nearly every week it’s been in season, we’ve placed a few eggplant next to the tomatoes and peaches, taking the nightshade home to creatively integrate it in dishes that aren’t our two standard eggplant meals. 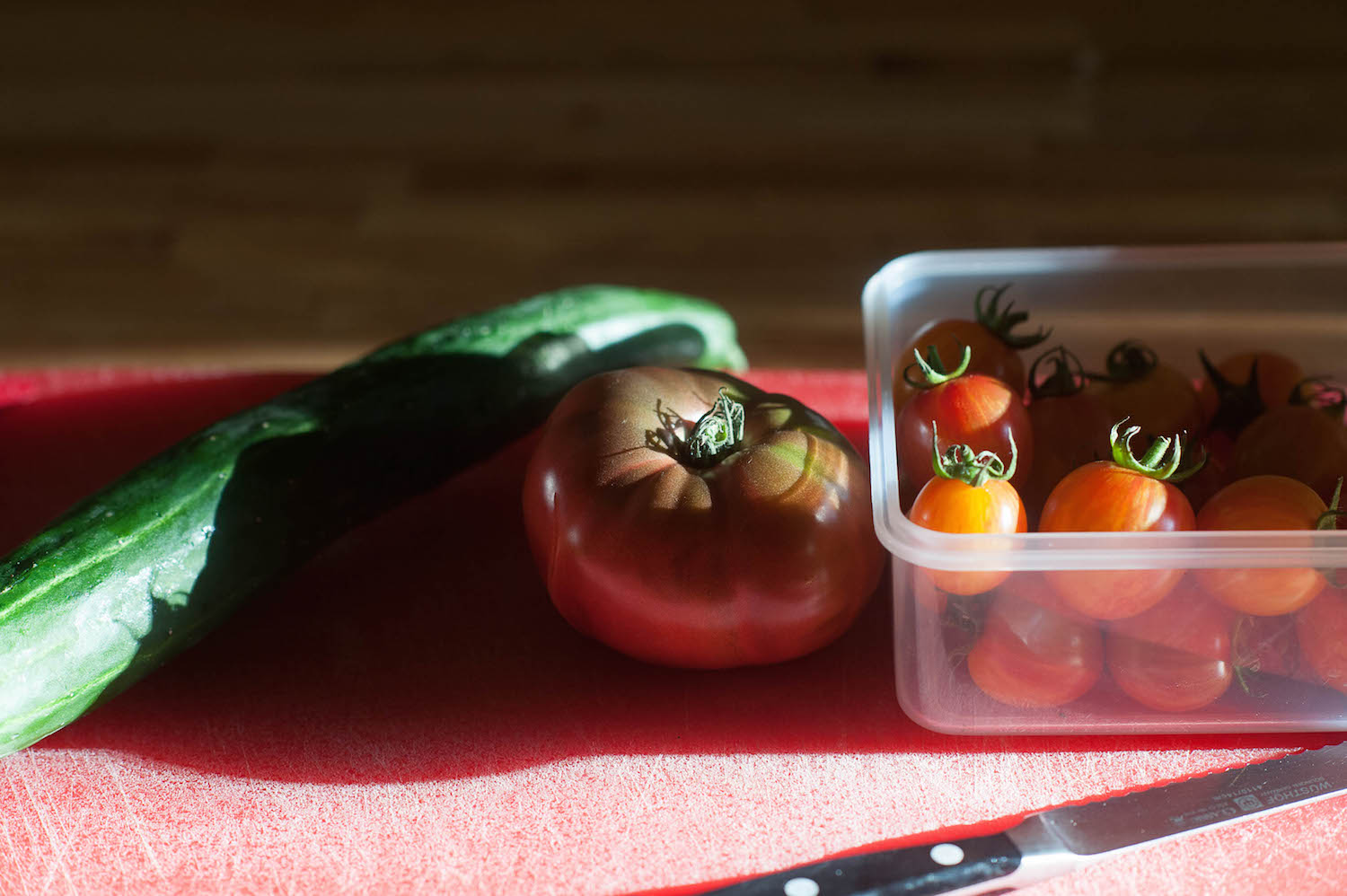 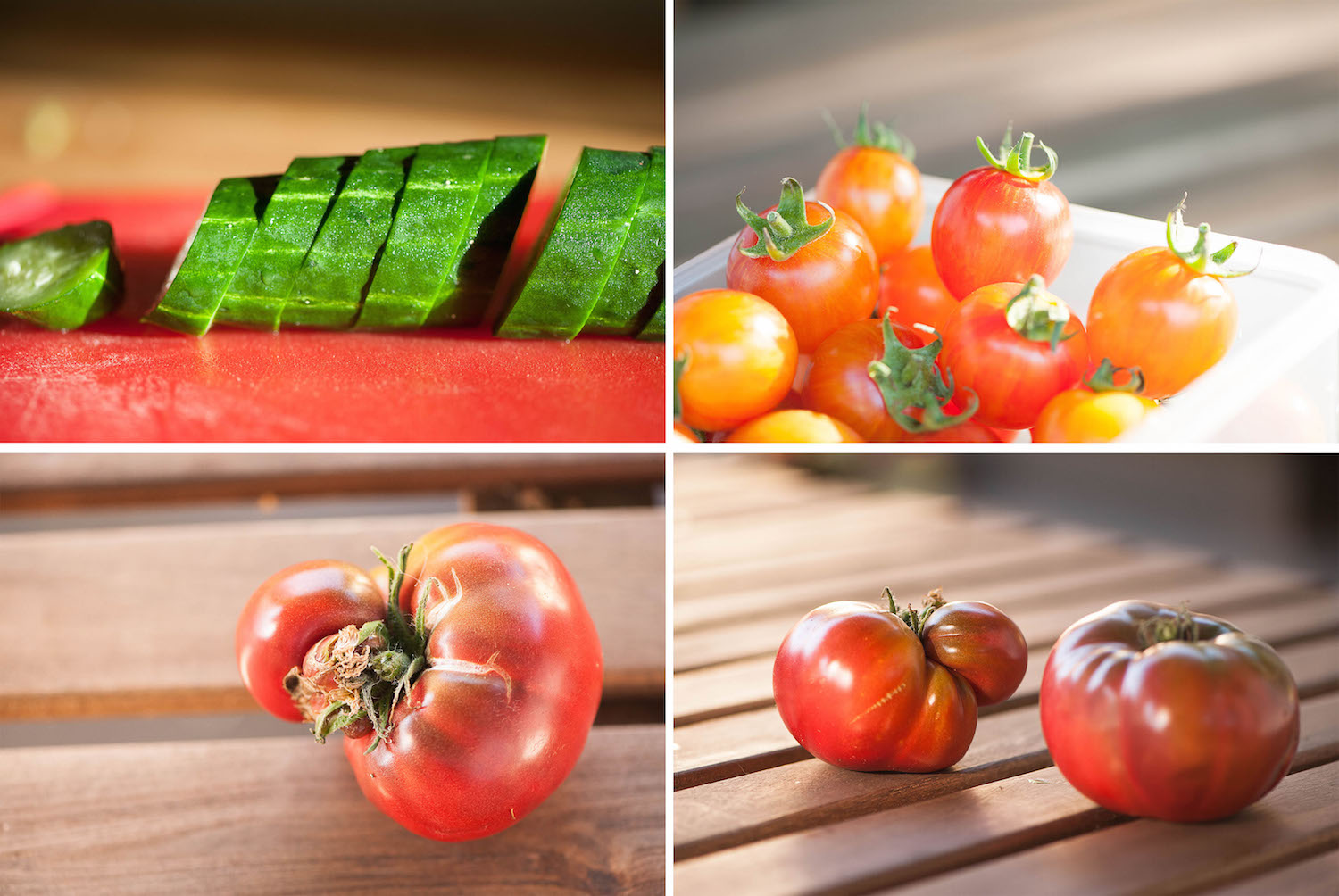 It started with a clipped out recipe for this fried eggplant and tomato salad, a preview from Yotam Ottolenghi’s upcoming book, Plenty More. Ottolenghi isn’t a secret fan of eggplant; his original Plenty cookbook dedicates an entire chapter to the vegetable. 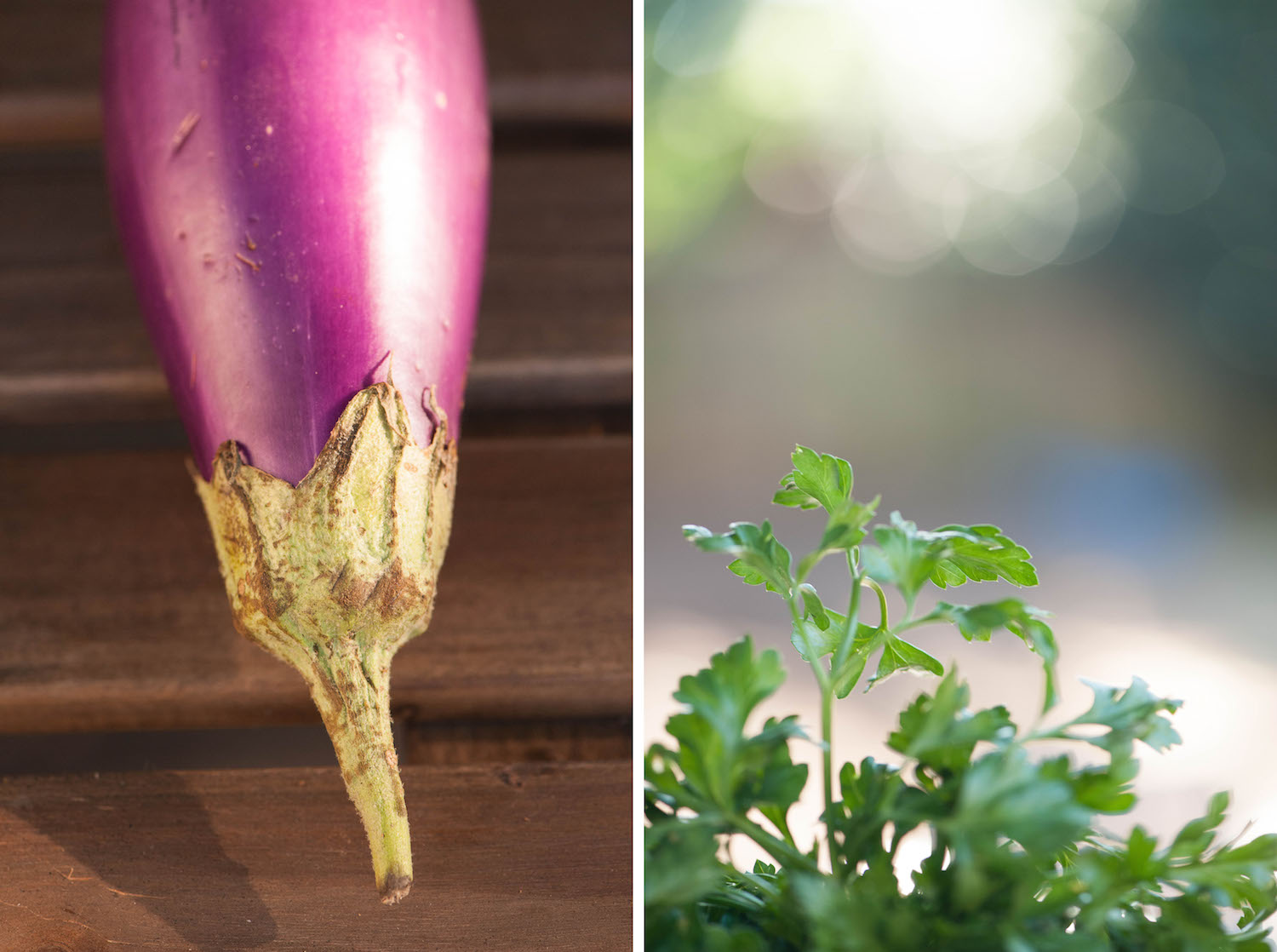 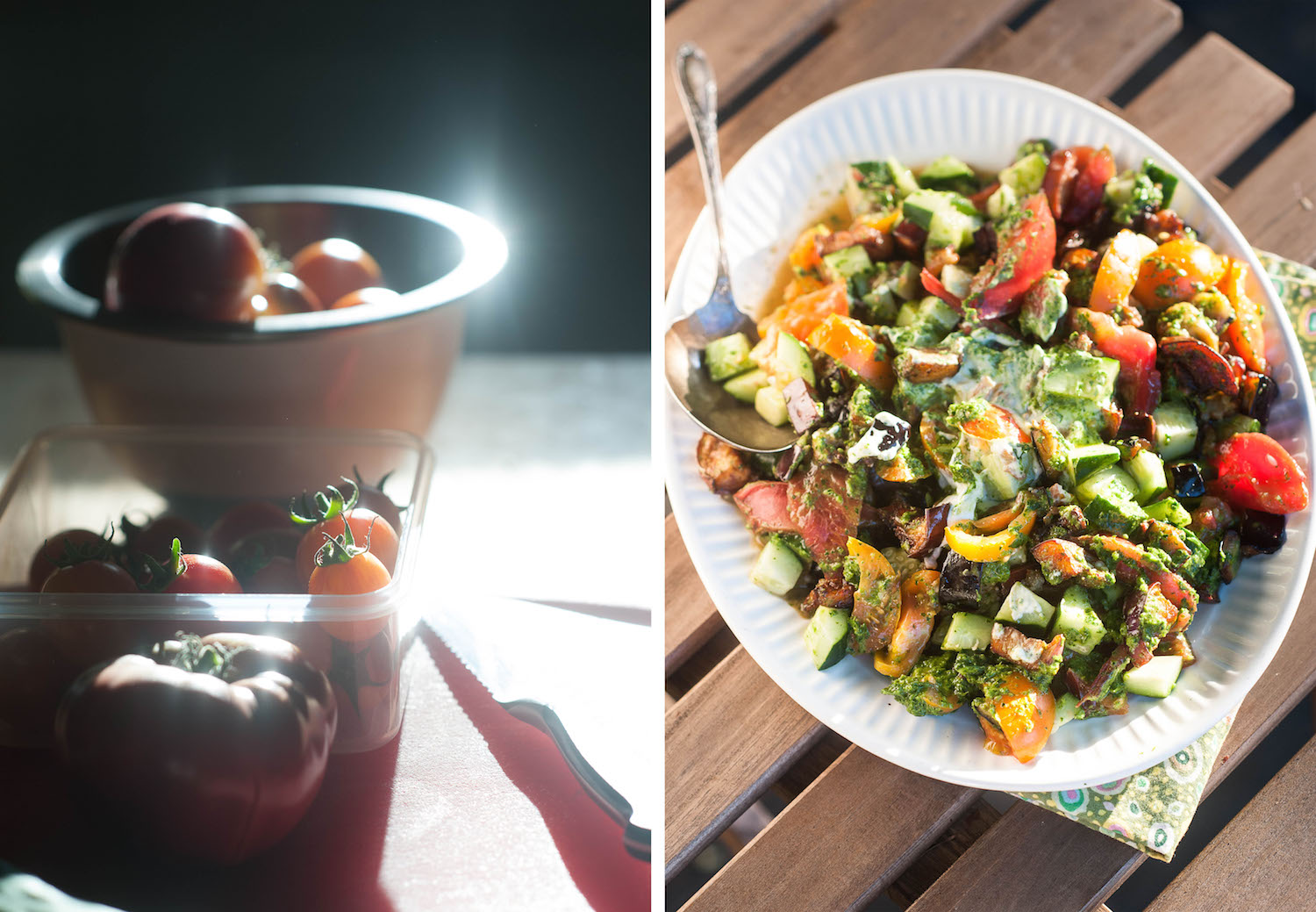 In this salad recipe, Ottolenghi writes that the fried eggplant is like a sponge, with the salt both firming up the flesh and ensuring that it cooks evenly. The salty crispiness of the eggplant acts as the bridge between a perfectly acceptable tomato and cucumber salad – a salad only memorable in its simplicity of seasonal ingredients – and a tomato salad that becomes a crave-worthy entree. Demonstrating his superior grasp of flavor combinations, Ottolenghi binds the eggplant, juicy tomatoes, and cool cucumbers with a vegetal-tasting herb oil and a tangy yogurt.

Each time I eat this salad, I consciously load my fork up with every component, not wanting to take a bite that doesn’t contain that spark of crunch and salt. A simple summer salad should require minimal time in the kitchen, and fittingly, the assembly and preparation becomes virtually nonexistent after you’ve fried the eggplant. When I make it, I tend to combine all the ingredients together and let them merge and mingle for 30 minutes as I prepare the other part of dinner, which lately has been an herby zucchini fritter that enhances that prevalence of this salad’s herb oil. 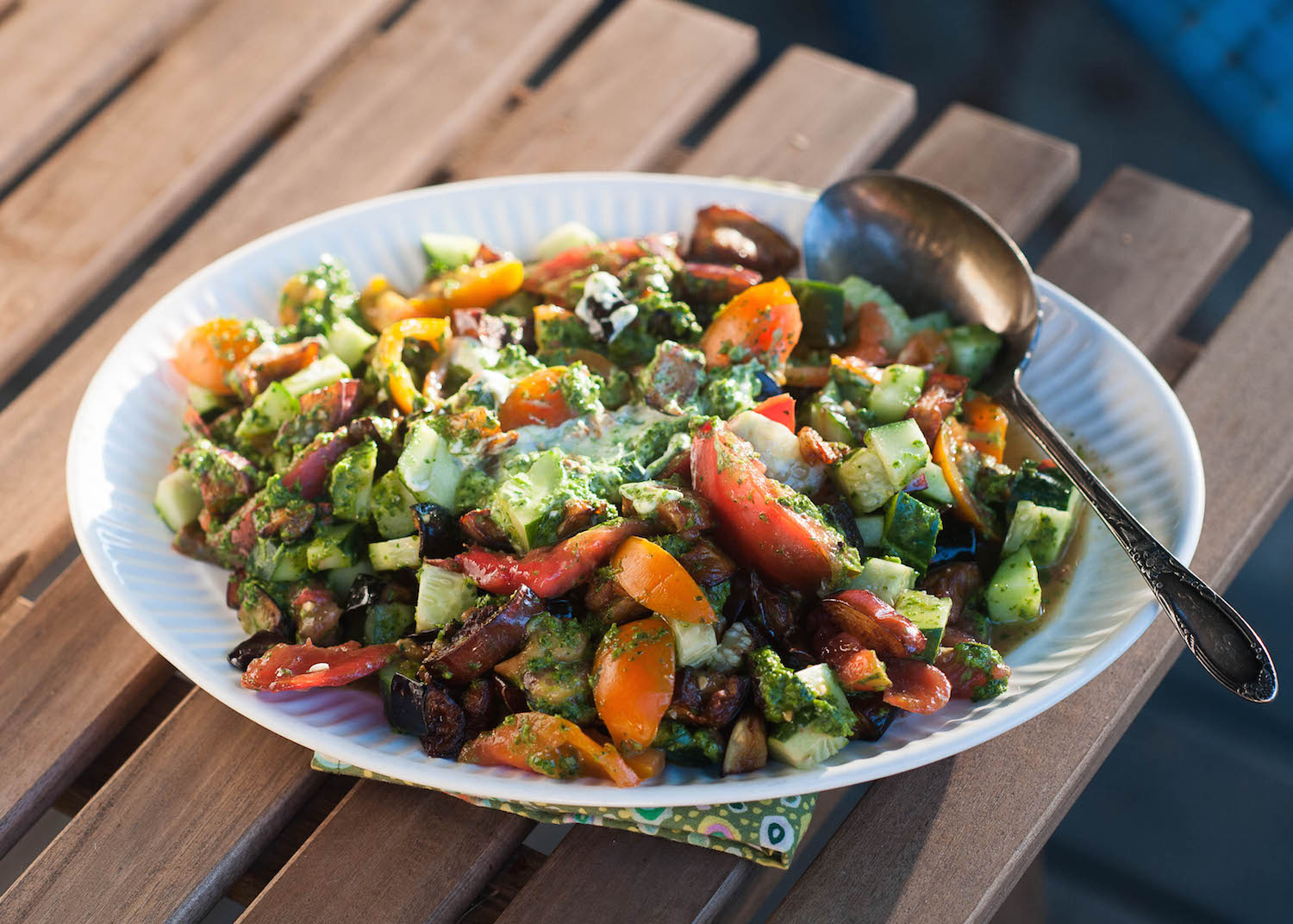 Like Ottolenghi, Deborah Madison has a doctorate level understanding of textures and flavors. I’m continually surprised by the flavor results that stem from Madison’s remarkably simple recipes. In Vegetable Literacy, Madison often suggests pairings that initially read as too simple to be memorable, like this next eggplant dish. 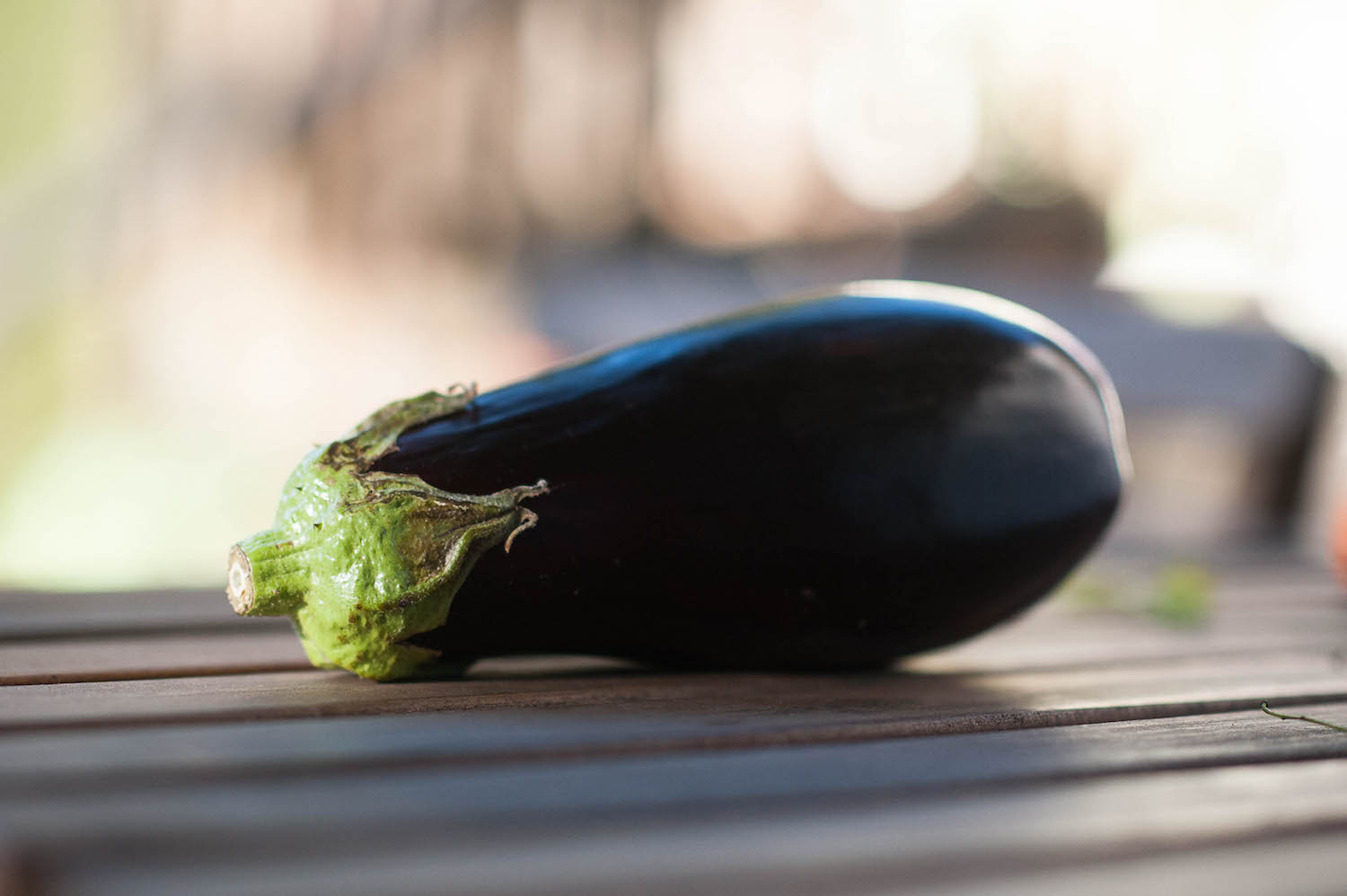 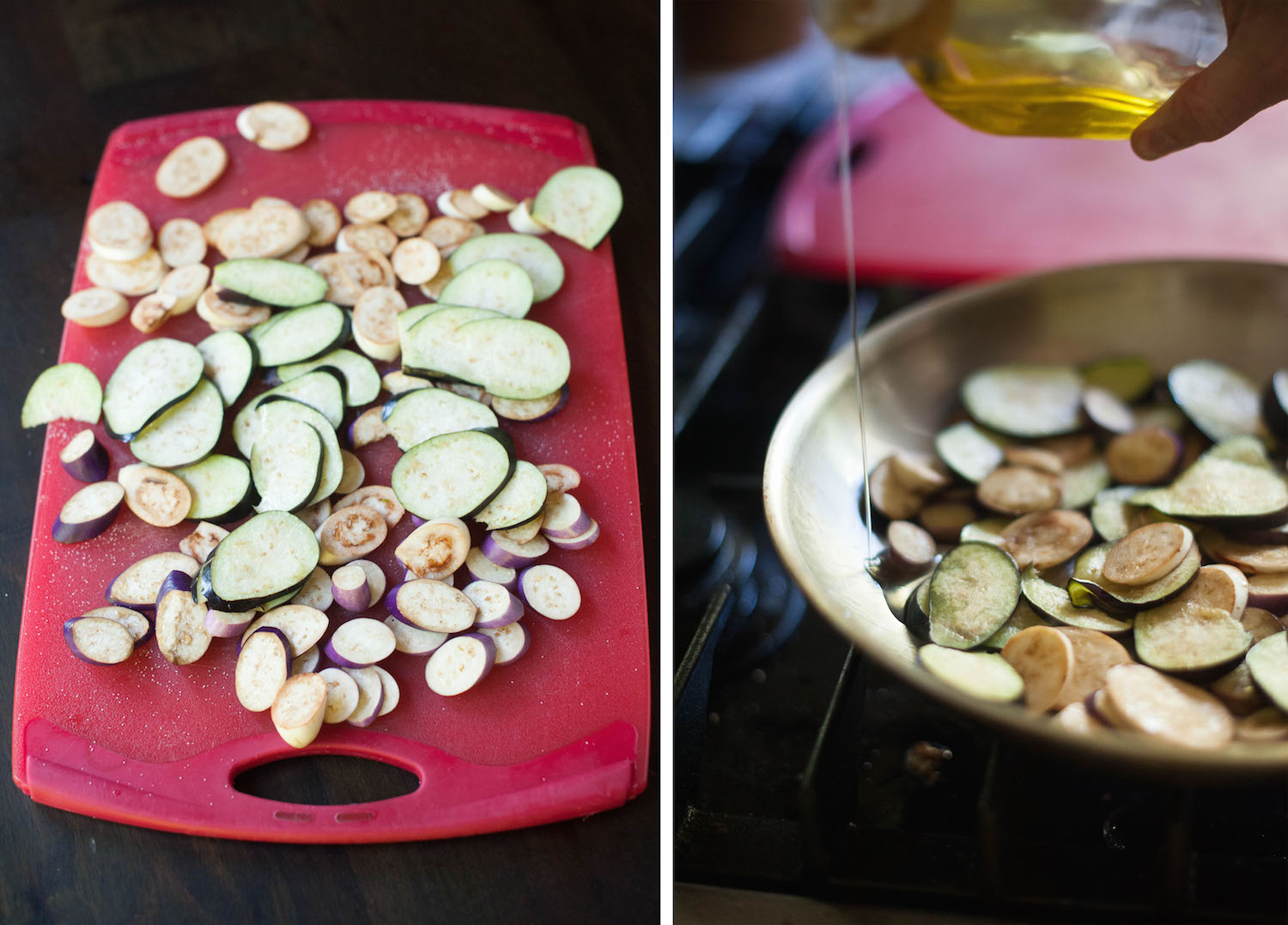 Admittedly not the most attractive of colors (a recent dinner guest mistook the appearance of the vegetable for duck), you forget the gray-ish color upon the first bite. Instead, the eggplant takes on umami flavor (a distinct savory taste supplied by glutamate, an amino acid found in ingredients like miso and soy sauce), pushed further into sublime territory by a sprinkling of sugar. 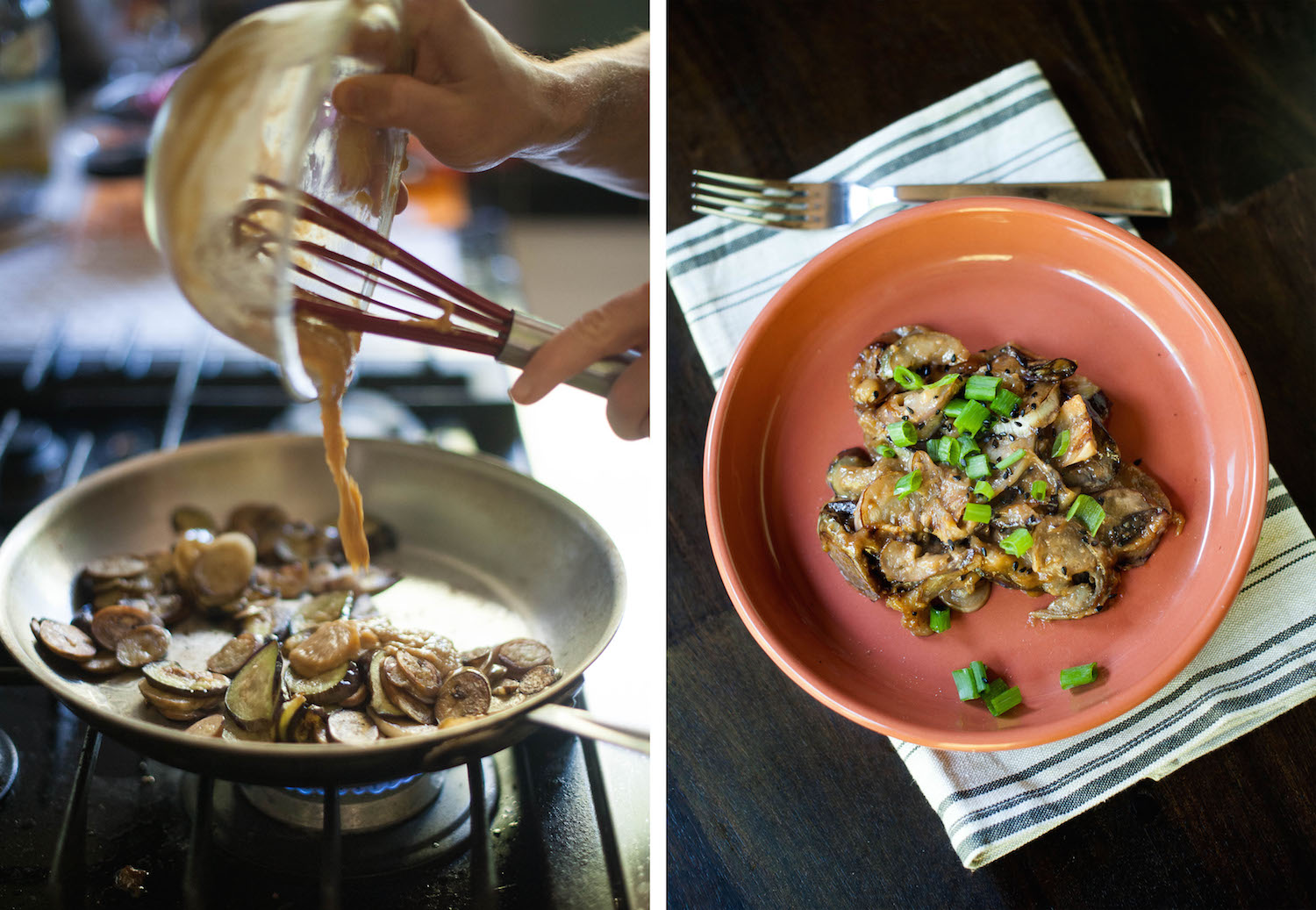 Madison isn’t one for a superfluous ingredient; the slivered green onions balance out the chew, livening up bites with their fresh crunch. Along with miso, mirin acts as the architect behind these addictive flavors. A sweet fermented wine derived from rice, cultured rice, and shochu (a distilled alcoholic beverage), mirin serves as both a flavor enhancer and a binding agent, allowing this particular marinade to cling to the eggplant pieces instead of clump together. 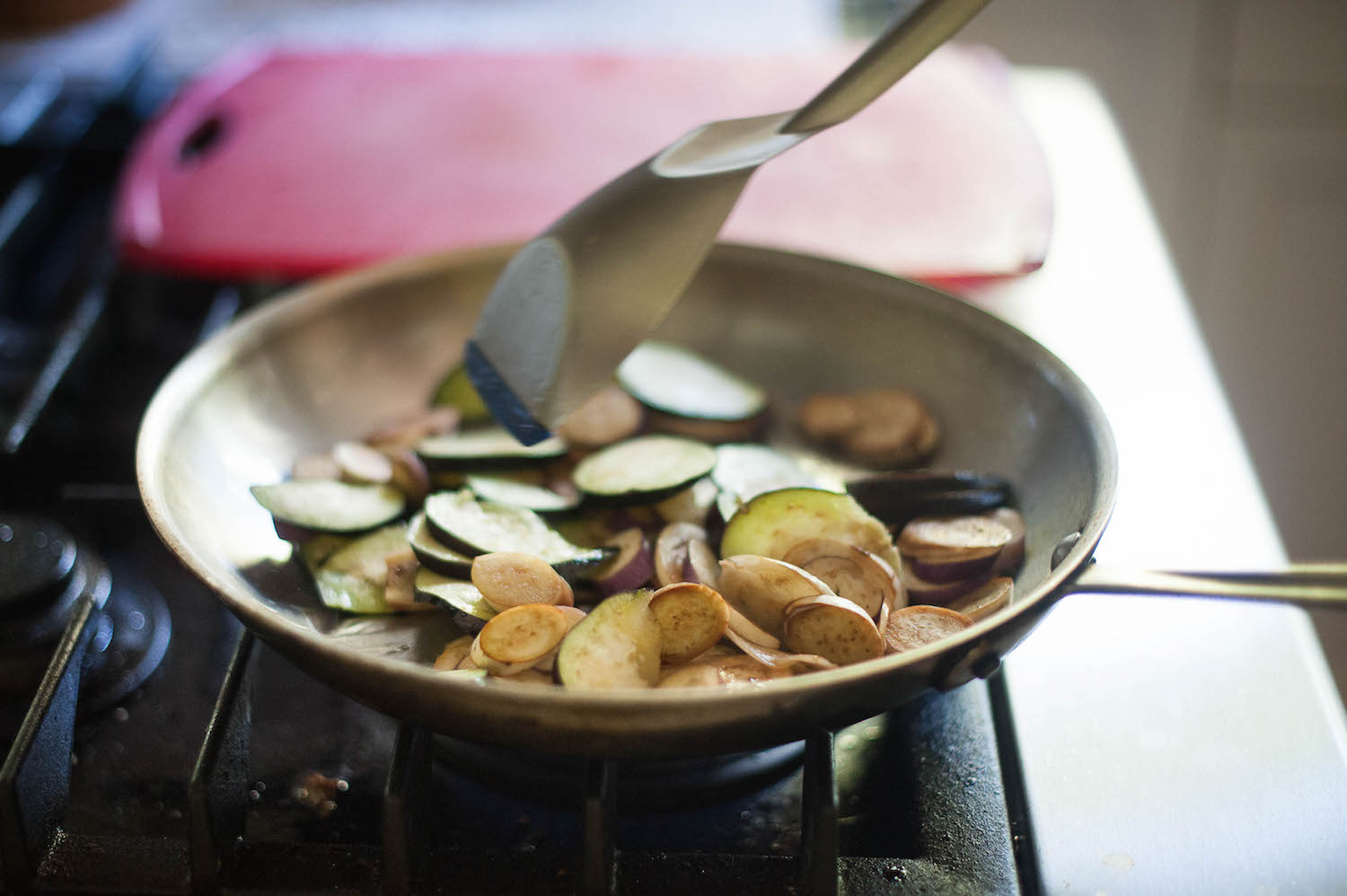 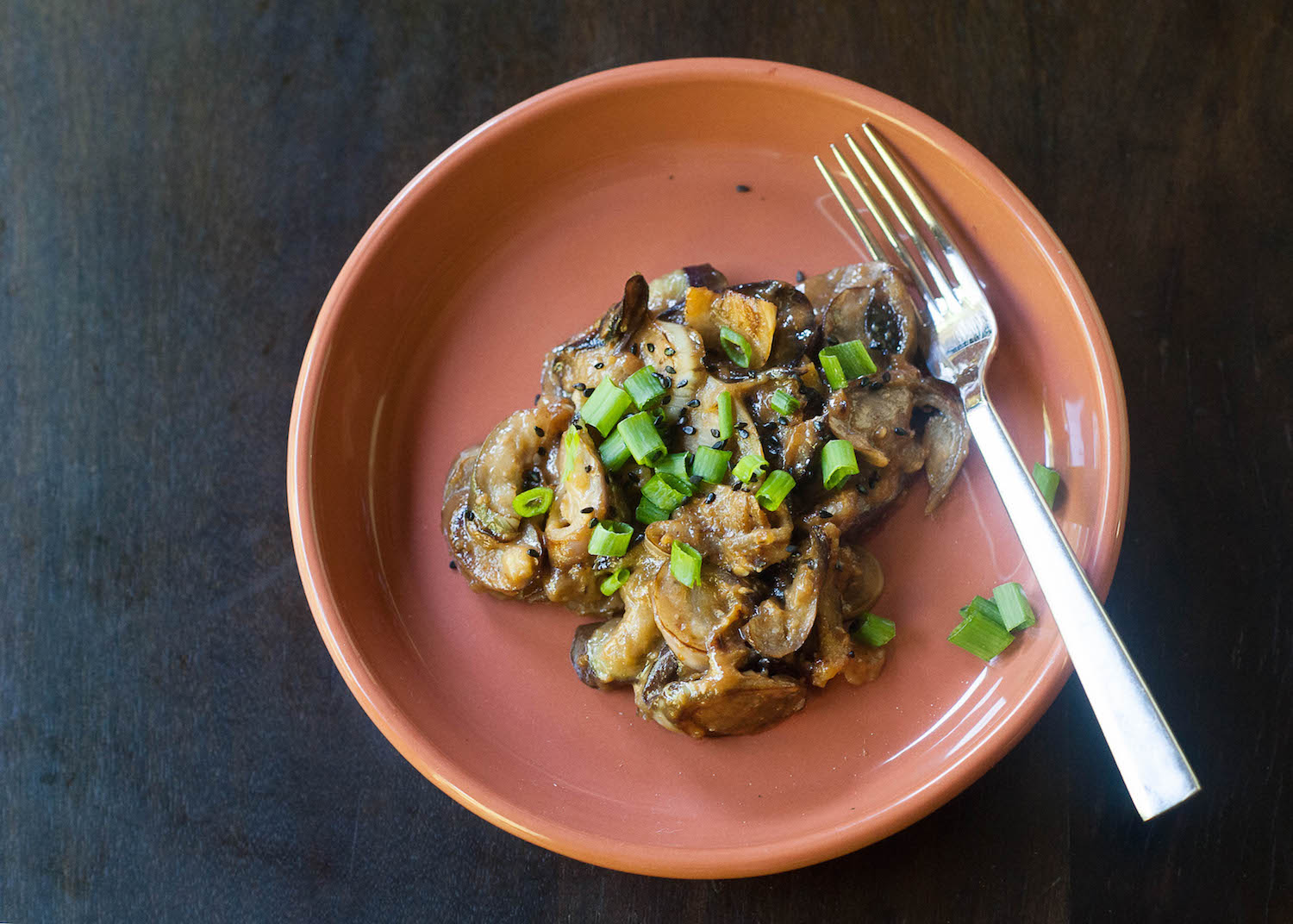 Though we own a few pasta cookbooks that have become sauce-stained and less than pristine from repeated use, we recently found a pasta cookbook that enhances our small, well-loved collection: Pasta, from the Rome Sustainable Food Project. (I also highly recommend their vegetable cookbook, Verdure). Each year, visiting professors and researchers descend upon the American Academy in Rome, spending time in a sequestered environment to research and write. One of the purported benefits of a sabbatical like this is the freedom from everyday tasks like laundry and cooking. Unfortunately, until recently, the food at the American Academy was less than inspiring. 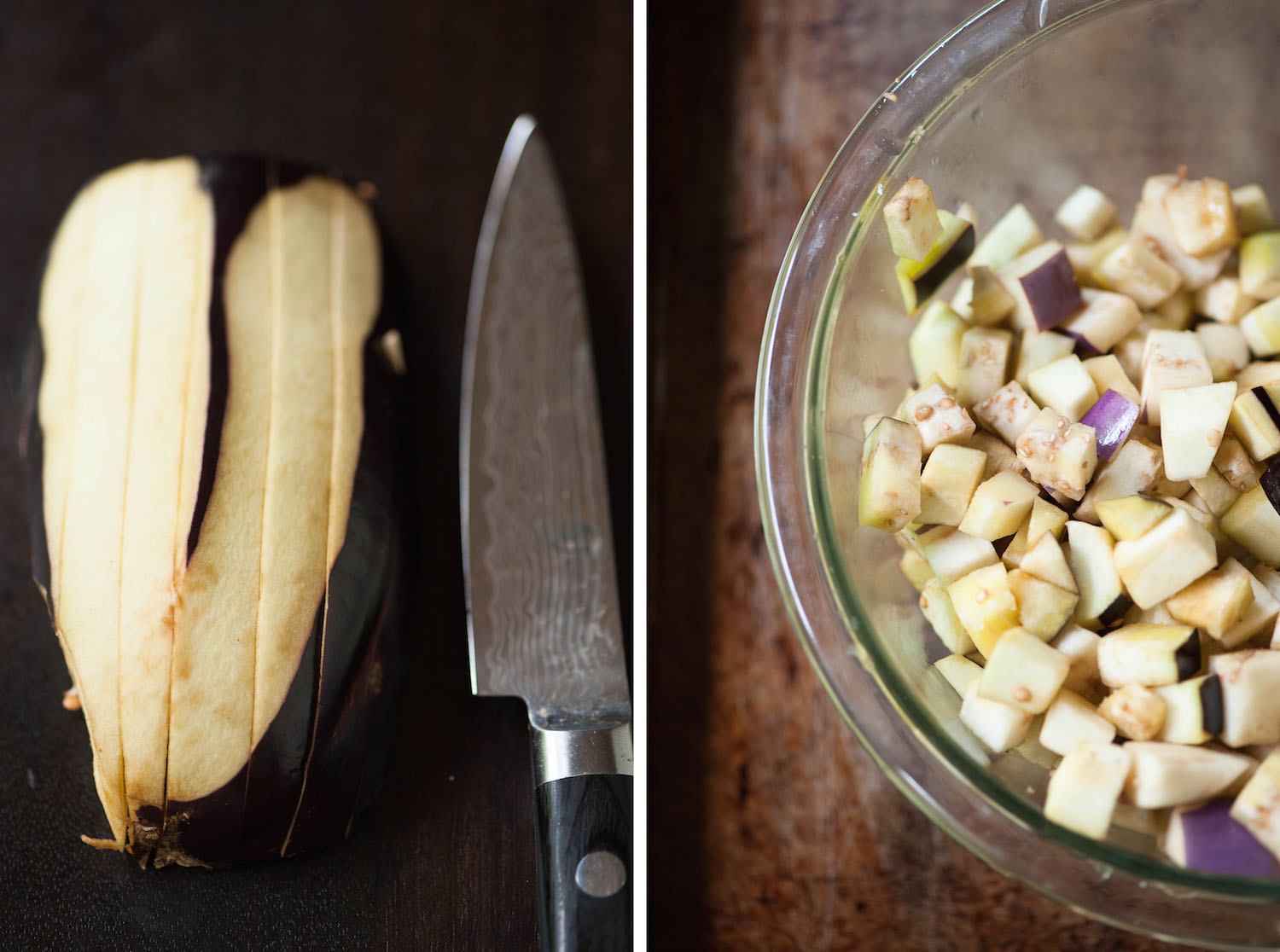 Alice Waters, along with chef Mona Talbott, decided to integrate the food program into the greater picture of the academy’s role, linking food – its sourcing, its preparation, the community around it – to the academy’s mission of stimulation and intellectualism. Since 2007, the food project has “nourished and supported work and conviviality.” In addition to bringing scholars together over simple, seasonal food, all members of the academy have the chance to help harvest and prepare the food. As one member wrote on the website, “the kitchen at the academy knits together the seemingly disparate worlds of scholarship and eating”, concluding that “we learned to live inside a landscape” (a landscape that should always include food.) 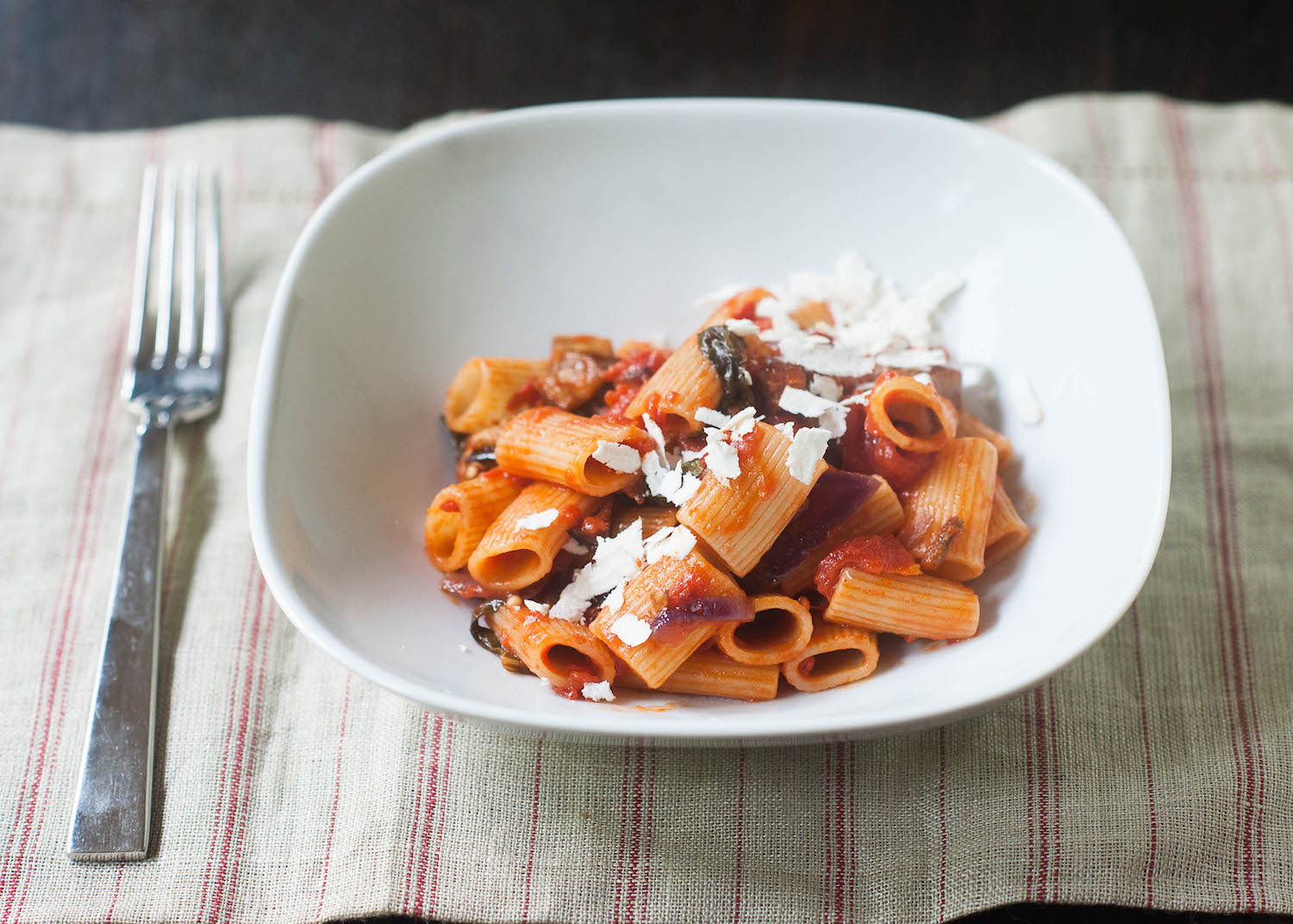 The simplicity and seasonality of RSFP’s meals translate easily into a home kitchen, serving the exact same purpose that it does at the academy: to allow those of us who spend a lot of time sitting in front of computers or lost in the depths of our internal dialogues to reconnect to the bigger, greater world, apply tactile skills in the kitchen, and develop a truly comforting meal. This eggplant pasta dish shines for how few ingredients are necessary to snap one out of her end-of-workday exhaustion and into the world of comfort and relaxation – and ideally, conversation. I can attest to the sentiment behind author Christopher Boswell’s glowing blurb before this recipe: “This is my absolute favorite pasta in the world.” “In the world”: I don’t tend to write in hyperboles like this, but it has been our favorite pasta dish we’ve made this summer. 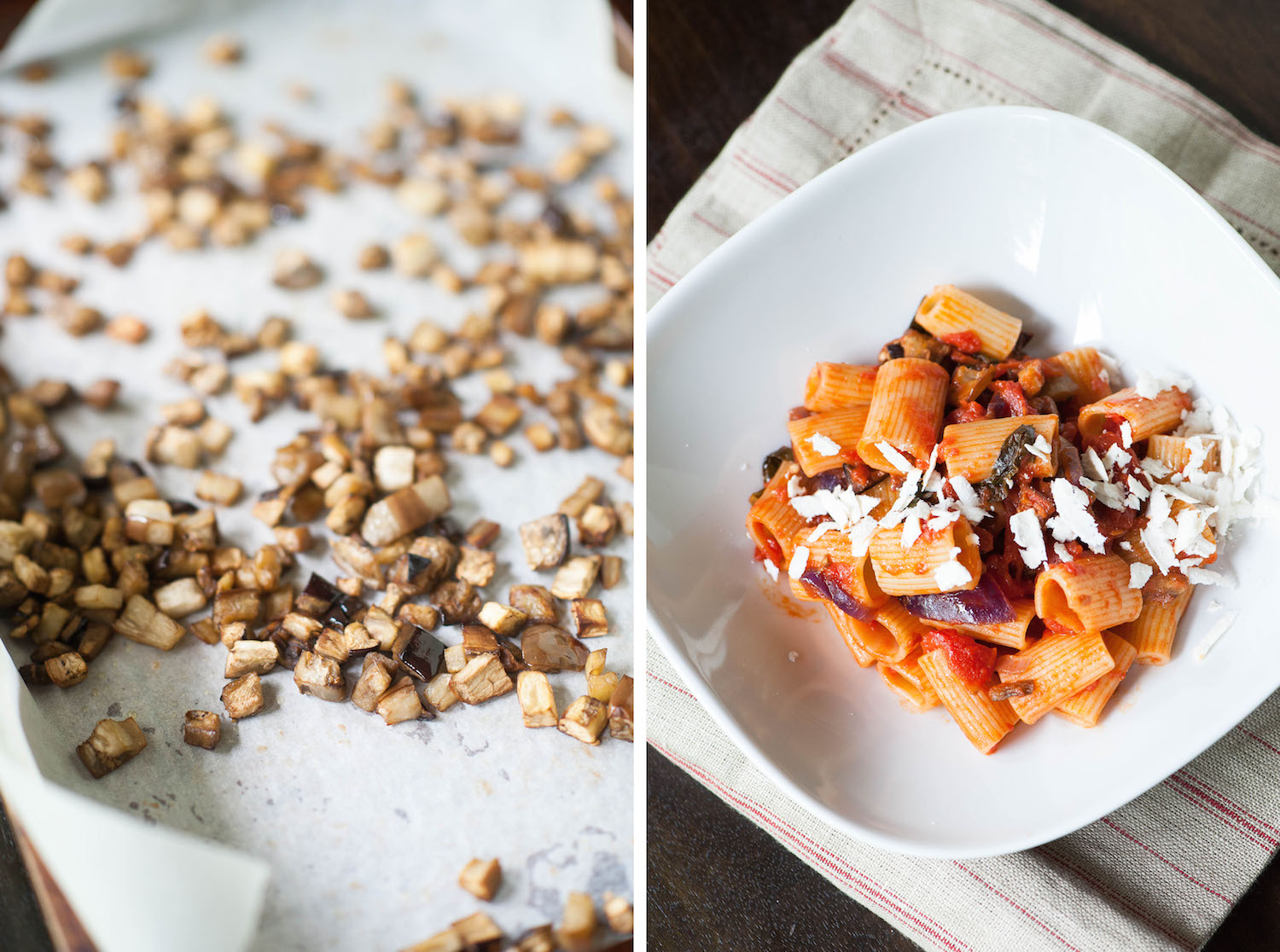 So, there you have it: this August, I moved beyond my two standard eggplant dishes, not discarding them for something new and better, but adding to my repertoire while simultaneously eliminating this unconscious eggplant rut into which I’d fallen. I’ve finally grasped the versatility of this vegetable, appreciating the many ways it can provide comfort, texture, and a heartiness to a meal or side dish. Though I’ve highlighted our three favorite eggplant dishes of the summer, I easily could have shared at least four additional recipes that we can’t stop making. In these waning summer weeks, I’m now consciously saving room in my market bag for a few eggplant each time I go to a farmers’ market, aware of all of the meal options that stem from a few pounds of eggplant. Distracted by all of these new-to-me eggplant recipes, we’ve yet to make eggplant marinara this summer. I think I know what’s for dinner tonight. 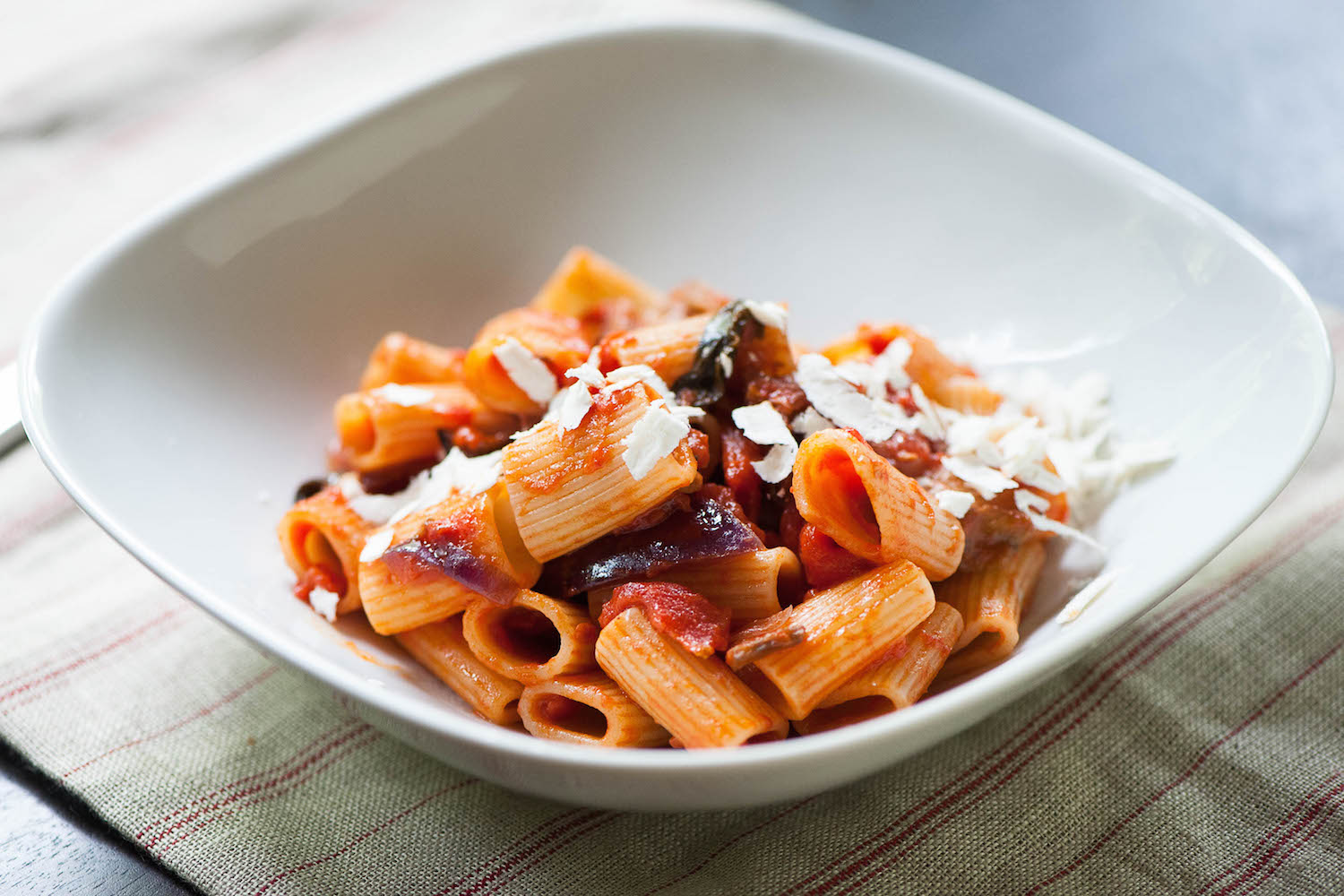