Quick, what's the first word that comes into your head when you hear the phrase 'Southern food'? Is it 'gravy', 'heavy' or 'meat'?  Southern food has always been grounded in its homeyness and warmth.  Recently, a crop of Southern-influenced chefs and restaurants have revitalized the stereotypical cuisine.

Re-imagined Southern cooking still maintains its comfort, but now the ingredients are seasonal, the gravy is in moderation, and the focus is on slowing down and building flavor.  As a native South Carolinian, I know that Southerners pride themselves on their community and relationships; now, you can eat at Southern influenced restaurants without skyrocketing your cholesterol reading. 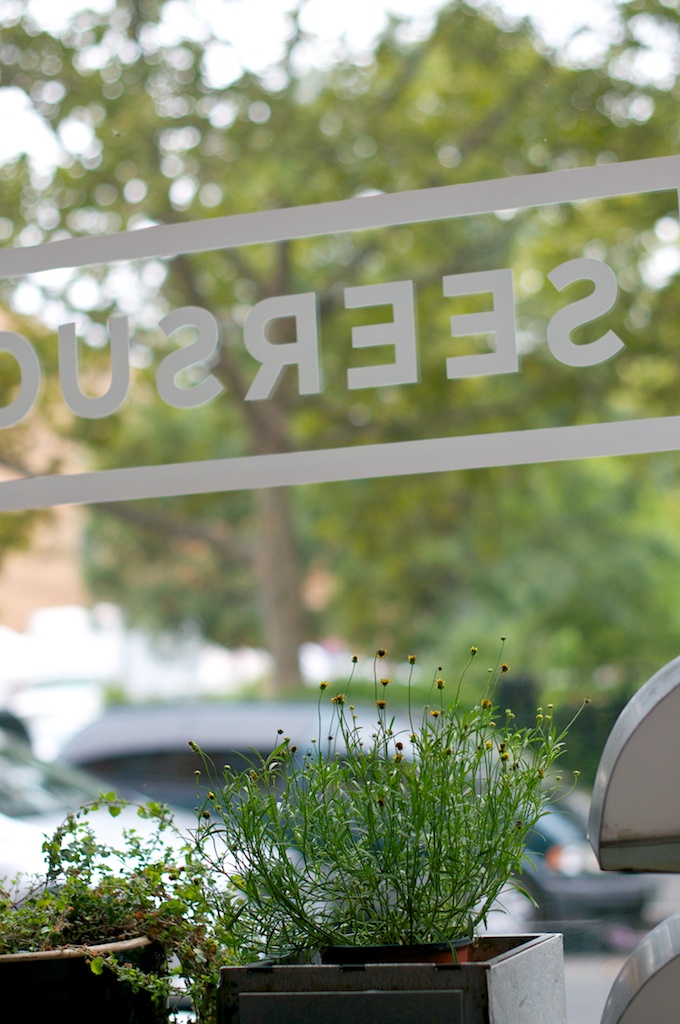 Seersucker, located in Brooklyn's Carroll Gardens neighborhood, quickly established itself as a Slow Food neighborhood restaurant following its opening last Spring.  Chef Robert Newtown, a former vegetarian and his girlfriend and co-owner, Kerry Diamond, source the majority of their food from local farms and artisans and make as much from scratch as possible.  But, as a Southern restaurant--even one with an emphasis on quality ingredients--is there even a point for someone who doesn’t eat meat to visit?

I stopped in for lunch before the holidays and was pleasantly surprised by the selection of vegetarian options. 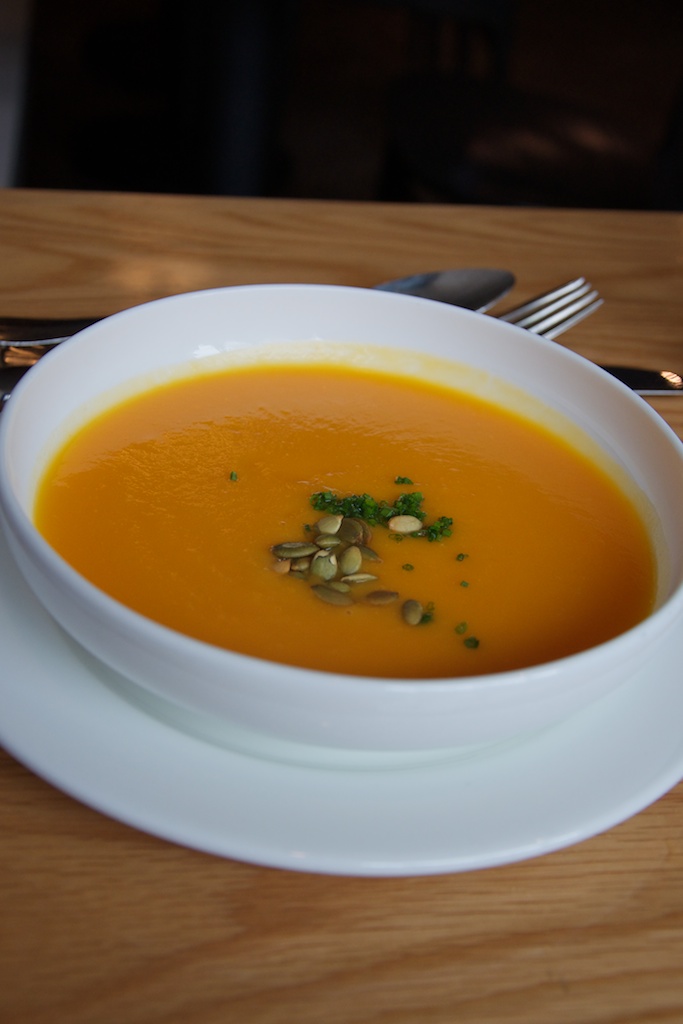 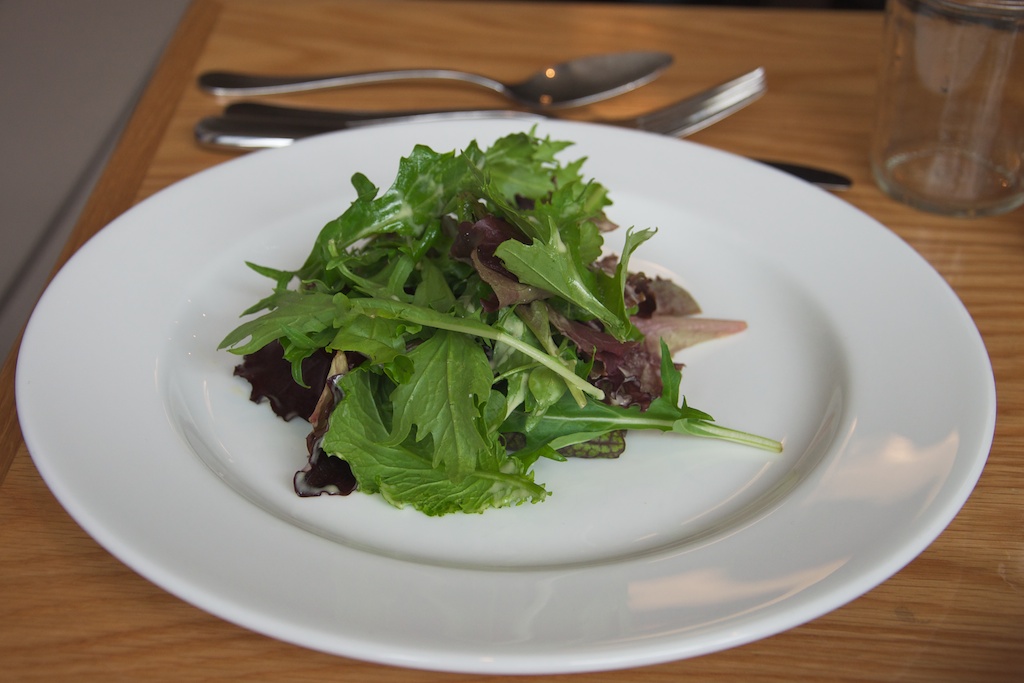 After ordering sweet tea (with just the right amount of sugar), Justin and I picked the menu's four vegetarian items to share, starting with Local Sweet Potato Soup with Toasted Pumpkin Seeds ($7) and a Mixed Greens Salad with a Lemon Dijon Vinaigrette ($7).  We admired the presentation of both dishes:  they were perfectly plated, with the burnt orange of the soup especially eye-catching.

I was equally impressed with the salad's composition:  each green tasted like it was hand selected by the chef before being topped with a moderate amount of tangy dressing and finished with a dash of sea salt.  Unfortunately, the sweet potato soup tasted more healthy than good--a food I should eat, but didn't really want to.  While the salad was perfectly seasoned and nicely balanced with the acid of the dressing, the soup lacked flavor--it suffered from a deficit of salt, pepper, and overall complexity. 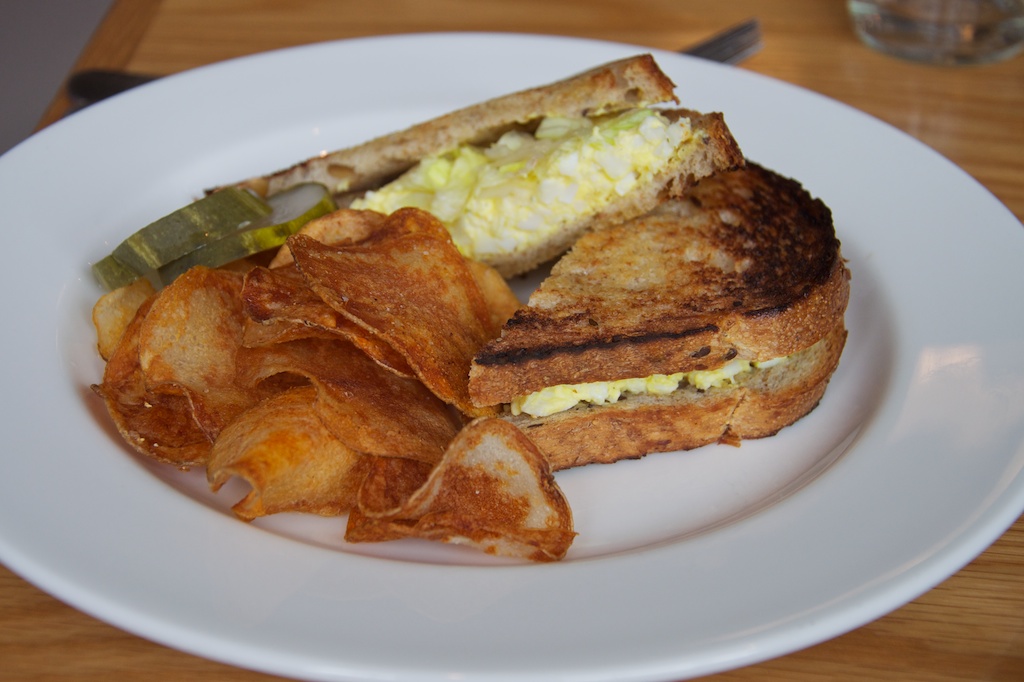 We continued with the Egg Salad Sandwich on Multigrain, which came with a side of homemade spiced chips and a pickle ($8).  The bread was well-toasted and buttered and the egg salad was solid enough to stay in the sandwich the entire time I was eating it, instead of sloppily falling out, as some egg salad is prone to do. Unfortunately, the salad wasn’t equally distributed across the sandwich, leading to a few off-note bites. The accompanying chips were thin, crispy, and well-rationed:  enough to fill me, but the serving size was not so large as to induce feelings of guilt! 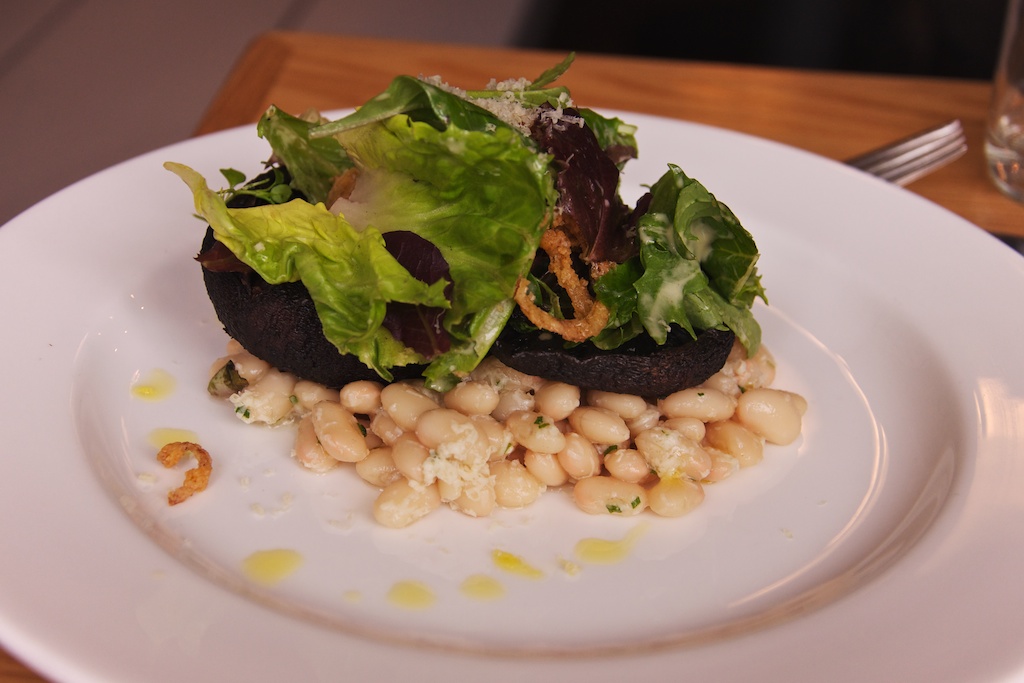 We ended with the Garlic and Herb Roasted Portobello with Great Northern Beans, fried onions, greens, and Parmesan ($11).  This was the one dish we had that I felt stood on its own.  If I had ordered this and nothing else, I would have left satisfied and full.  While the other dishes worked well when paired together, this entree took the overly used, and often ill prepared, Portobello mushroom and turned it into something even meat eaters should seek out. (Seriously, how many times have you gone into a restaurant seeking a vegetarian option only to hear about their Portobello mushroom sandwich?)  The Portobello itself was seared to be a bit crispy on the outside, which merged well with the crunchy onion straws.  In fact, a bite of beans, mushroom, and greens equaled one of the best vegetarian lunch options I've eaten in New York.

Seersucker's ingredients are the stars of the restaurant--and except for the Sweet Potato Soup--the flavors did not disappoint.  The final bill averaged to $20 a person…and unlike some vegetarian lunches I've had, we didn't leave hungry!

*Note: If you try Seersucker for dinner, you'll also be able to eat a completely vegetarian meal and leave satisfied.  Mix and match snacks--potato chips, soups, salads ($6-$11) and get a larger version of the lunch size Portobello entree ($16 versus lunch's $11).  Choose from southern vegetarian sides of stone ground grits ($4), spaghetti squash ($5), or collard greens ($5).