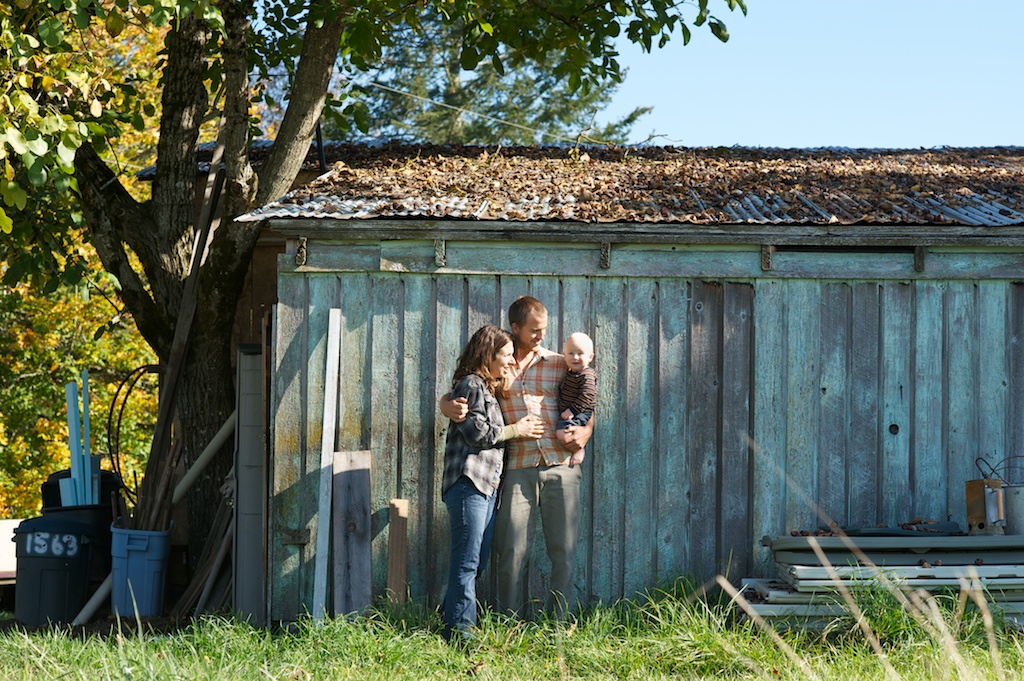 As much as they might crave a comfy couch, a relaxing beverage, and a sturdy ottoman, farmers don’t have the luxury of sitting down for an extended chat. At best, they can allot an hour for an interview, a catch-up with a partner, an email check, or a nap (that’s wishful thinking) before they’re off to the next task.

A farmer’s life is defined by its transitions. Seasons pass from one into another. An afternoon of harvesting follows a morning of weeding. Vegetables move from seed, to plant, to boxes for CSA customers; animals are born, grow, and die. Any given year reveals a careful navigation of crop choices, soil temperatures, and pest problems. As large as some of these transitions may be, they serve as only a minor illustration of the much larger, even existential transitions a couple faces when they choose to farm. 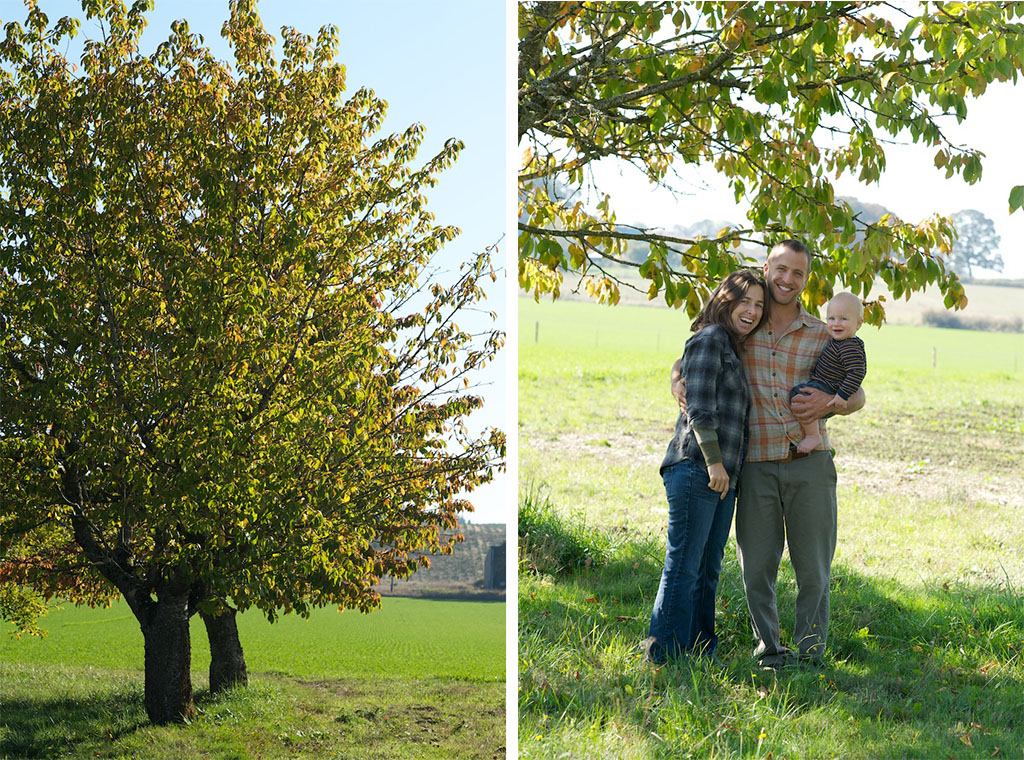 As Sarah Brown and Conner Voss of Mollala’s Diggin’ Roots Farm can attest, there’s no bigger transition in a farmer’s life than moving from rented land to purchasing your own land.

Last year, after four years of scouting various properties, the couple purchased a 47 acre farm that’s tucked off a winding country road paralleling Rt. 213. They uprooted their entire lives, moving from their small rented Portland farm to a property that housed a barn almost entirely shrouded in blackberry brambles, a 1960s ranch, and acres of overworked land. They’d seen this land before, two years into their hunt, passing it up the first time to consider other options. They each came to recognize the enormous potential in the sweeping property, envisioning fields of pastured animals, a tidy barn, and flourishing crops, made all the better by the proximity to Portland. Sarah and Conner also had a reason not to extend the land search any longer: the impending arrival of their son Wendell, now 10 months. 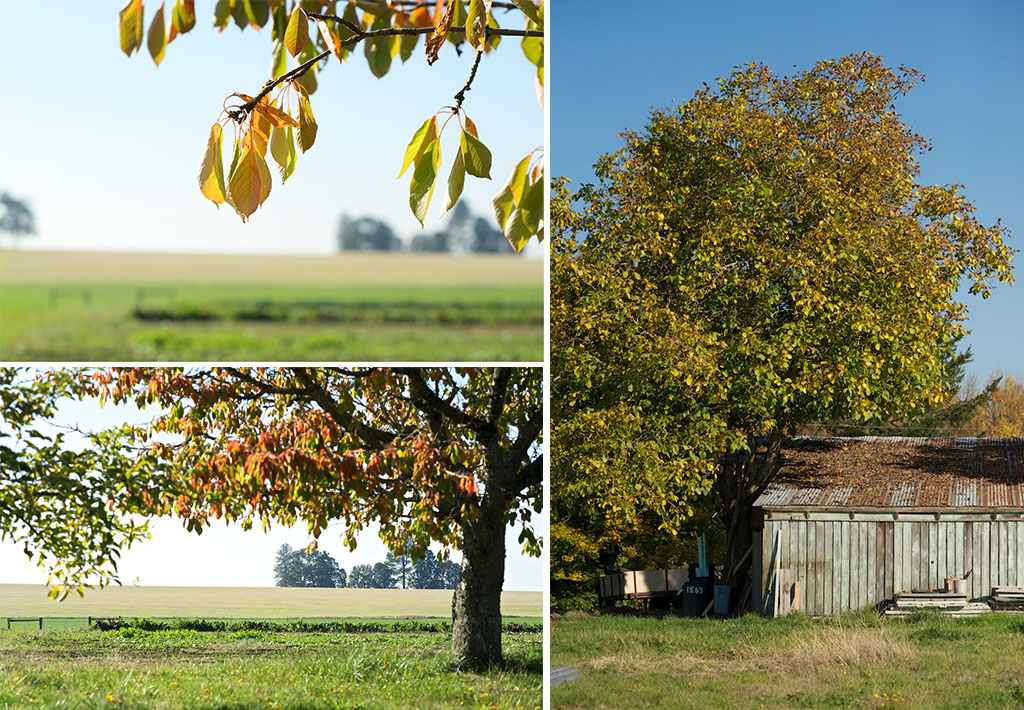 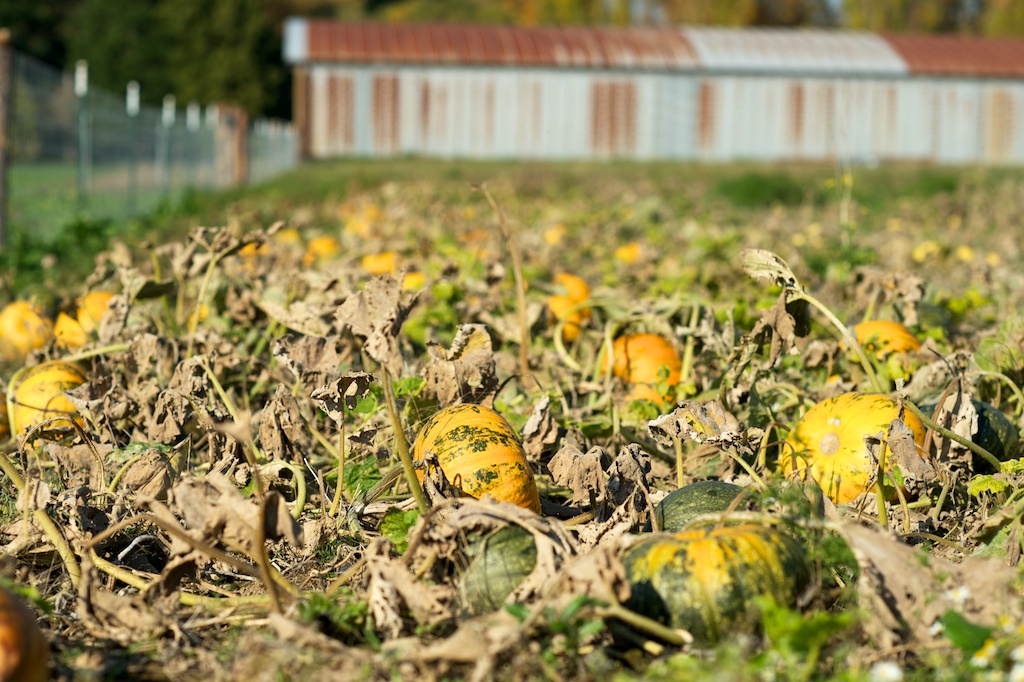 Carefully hugging the curvy road approaching their farm, I spotted Diggin’ Roots’ bright green pasture well before I arrived at the driveway leading to their house. In that final mile of my drive, I was struck by the pasture’s vibrancy, especially in contrast to the rapidly changing leaves dotting the road on that sunny October day.

Shortly after meeting Conner and Sarah, I quickly learned how much that pleasing sightline of green pasture means to them. A random passerby might appreciate its lushness as a pleasant reminder of soil fertility, but for the farming couple, it’s the culmination of an entire year’s work. Though they had hoped to plant the 35 acre pasture with a mixture of legumes and rye last fall, the land wasn’t seeded until six weeks before my visit. “It’s a huge relief,” Sarah sighed, “just driving by, the bare dirt made us so anxious.” Sarah explained that because they didn’t own the equipment to work that much acreage (nor do they want to), they hired out the work, and thus were on “other people’s schedules”. 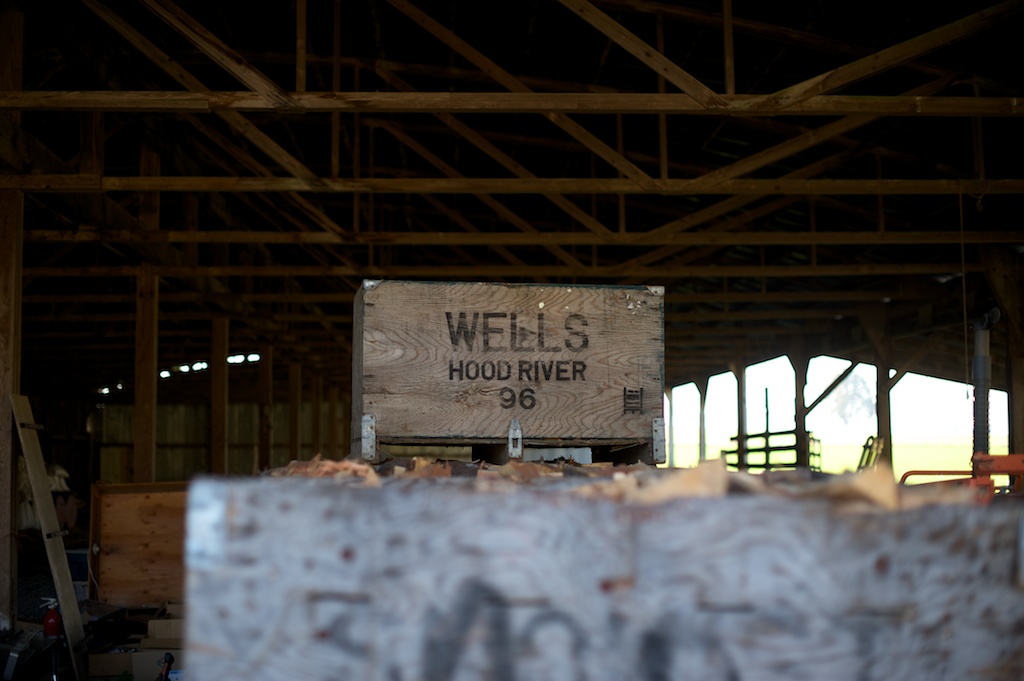 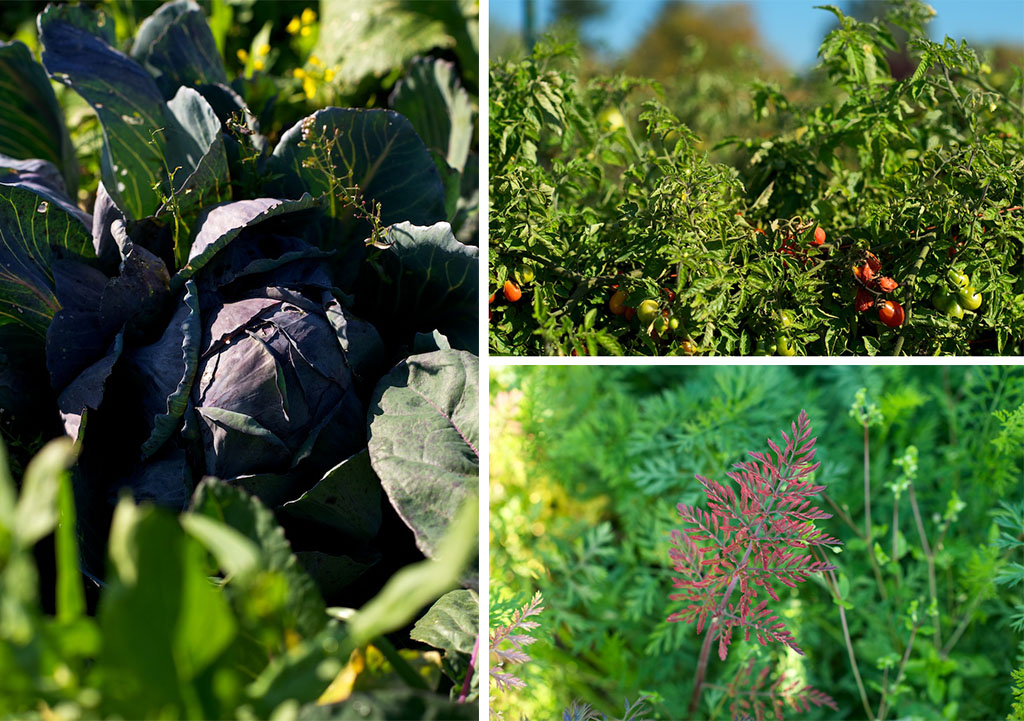 Conner and Sarah met as undergraduates at UC Davis, with Sarah studying international agricultural development and Conner “studying Sarah” (and international relations with an emphasis on natural resource management). Though farming wasn’t what initially drew them together, after Sarah spent time in Costa Rica working on a farm, both felt empowered by the growing sense of community present in the surrounding California progressive food movement, drawn in by a mutual commitment to the land and the joy that comes from growing food. After graduating, the couple eagerly took a position farming at a bed-and-breakfast in Washington, hopeful to work under a mentor. Sarah shared that “this [hope] ended up not being the case at all,” and even though the experience was challenging, it also helped them realize that ”farming is a personal expression, from how you approach it to what you prioritize.”

Seeking to improve their farming experience, the couple relocated from Washington to the Portland area, leasing a small two acre piece of land in Milawaukie. While they rented the property for five years, they couldn’t allocate all of their time to farming: the challenge of searching for their own land increasingly distracted them from their work. As they accelerated their search, their time diminished even more. 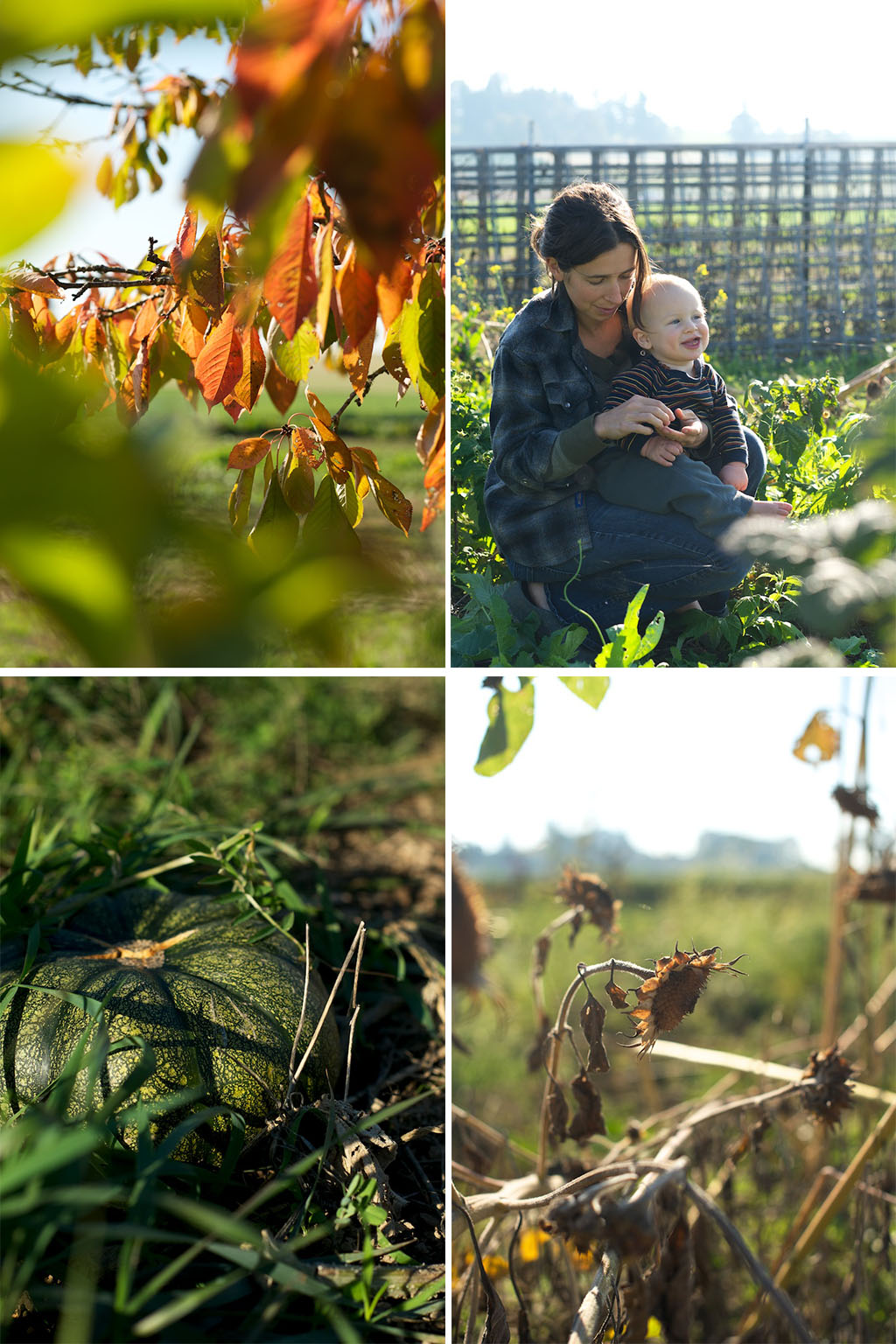 In a recent study, the National Young Farmers Coalition lists access to capital and land as two of the biggest challenges facing younger farmers today. Amassing capital is rarely the result of bootstrapping profits from rented land: loans, gifts from family members, a timely inheritance, or credit card debt usually come into play. Others look beyond their farm’s profits (or lack thereof) for other sources of income, with 73% of farmers reporting that they depend on some form of off-farm income. Once a farmer has gathered enough capital to purchase farmland, budgeting becomes the next challenge. In Sarah and Conner’s case, budgeting and planning felt like hypothetical exercises, as “we couldn’t plan the financials of it until we knew what the property [would have] and [wouldn’t] have,” Sarah explained to me.

Conner and Sarah’s experience fits snugly into the young farmer NYFC survey results, with a few unique caveats. Like many farmers, Sarah and Conner work outside jobs – but in their case, both jobs are directly related to Diggin’ Roots, and helpful to their ultimate goal of becoming full-time farmers. During their land hunt, Conner became a certified realtor to help them navigate the process and ultimately to assist other farmers in need. It’s easy to see how Conner could be of great help to other younger farmers when you scan a guide he wrote for purchasing farm land, in which he explains caveats in dealing with listing agents and visiting potential properties. In person and in writing, Conner pairs his detailed, practical knowledge with a deeper philosophy on the challenges of acquiring land. In one article for Oregon Tilth he wrote that “[t]he fate of farmland no longer accessible through traditional financing structures is utterly dependent on the emotional constitution and financial expectations of the owner.... Are they willing to sell below ‘market (development) value’ so that a couple of modest means might be provided the opportunity to carry on true small-scale agriculture in that place?”

As a couple of “modest means", the only path to acquiring land for Diggin’ Roots came by splitting the cost with Sarah’s father and combining his capital injection with money from Conner’s uncle, and thousands of dollars of loans for property and infrastructure. In our conversation, both farmers were clear about one thing: “Sarah’s dad made the mortgage possible. Without him, no way.” And without Sarah’s current position as the Organic Conservation Specialist with Oregon Tilth and the Natural Resource Conservation Service, they would have found their access to information on conservation assistance, and even the assistance itself, more daunting and slow to process.

Unlike with the purchase of a home, a single loan rarely provides funding for the purchase and development of a small farm; instead, farmers need to carefully assemble multiple financial vehicles. In addition to the funds acquired for their pasture from the local Soil and Water Conservation District, Conner and Sarah have an NRCS contract that’s helped with fencing, cover crops, and water run-off issues. Sarah shared that because of her role at NRCS – a role that involves enabling outreach efforts that increase conservation assistance to organic producers – her longstanding relationship allowed them to navigate the agency and its programs much more easily. 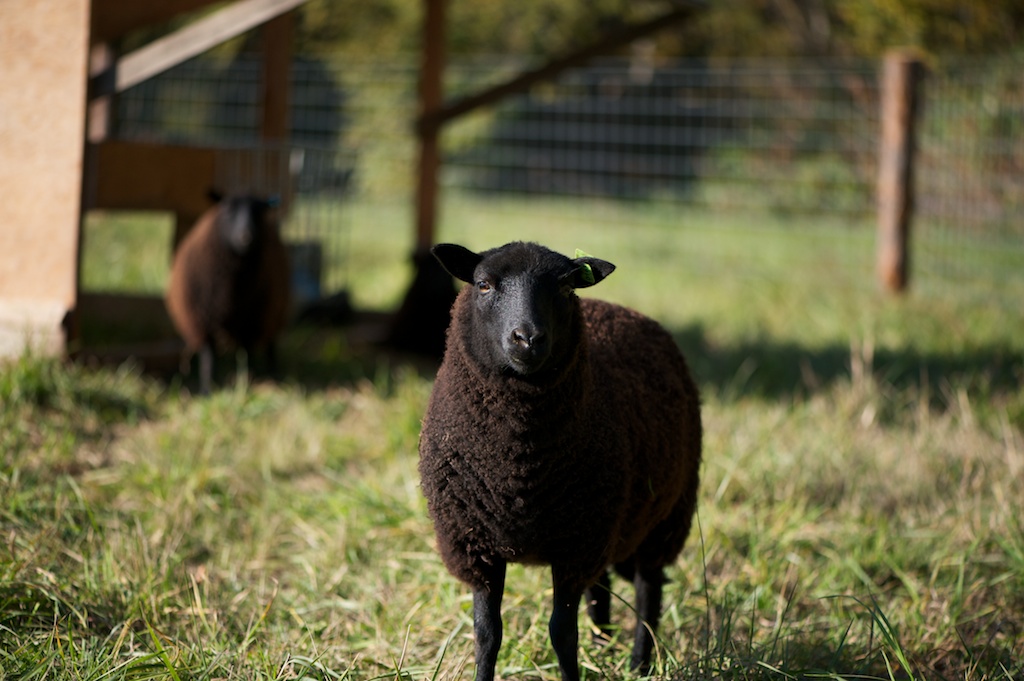 The pasture I first noticed on my drive provides the key to Diggin’ Roots’ future productivity. Now that it’s planted, it will begin to serve as the basis for Diggin’ Roots’ fertility and production, including nurturing their flock of three Welsh Black Mountain sheep, which they hope to eventually grow into 30-40 breeding ewes. The absence of pasture all summer didn’t prevent Conner and Sarah from growing an enormous quantity of diversified vegetables (grown in neat rows according to their classification: brassicas, lettuces, cucurbits, perennials), or from cultivating other kinds of relationships – those with their new community and customers. This summer, they sold their vegetables at the Silverton Farmers Market, while maintaing a small CSA for their Portland customers. And this winter, they’ve expanded their CSA to include customers they met at the local farmers’ market. 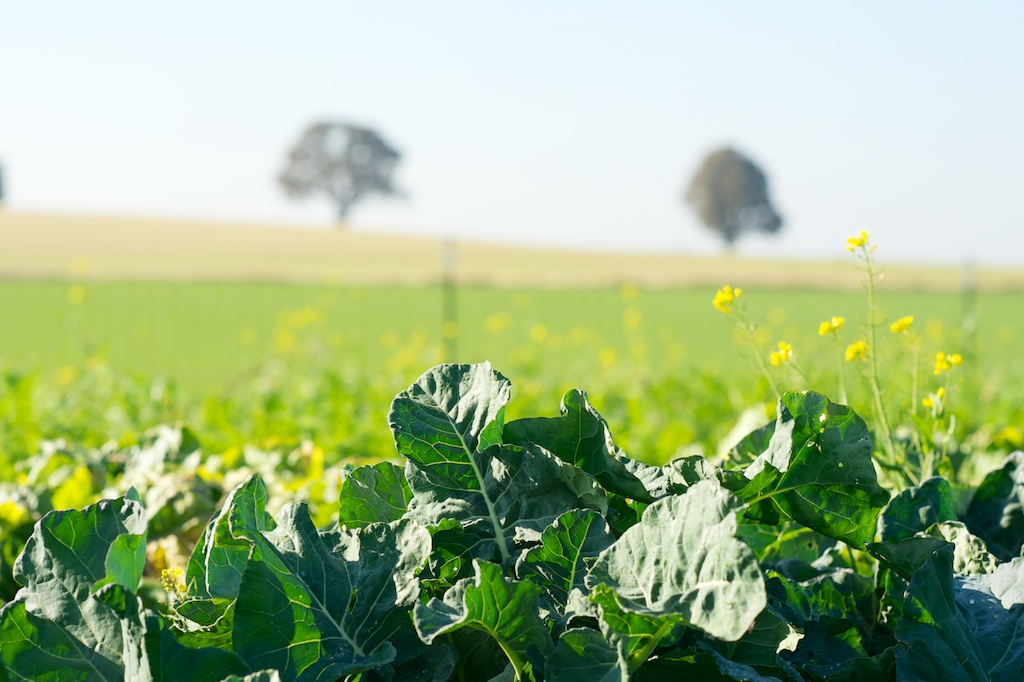 As they straddle a dual existence of planning and action, Sarah and Conner find themselves on the cusp of a new, more permanent stage in their “farming together” lives, transitioning from dream to reality, from navigating paperwork to navigating high tunnels. A decade from now, when Sarah and Conner reflect on 2013, they might remember the year as a blur of debt, sleepless nights, whacking back blackberry bushes, and sowing seeds. But I think they’ll also remember these transitions – new land, new town, new customers, and of course, a new family member – as an opportunity that allowed them to draw strength from their own relationship and to solidify their firm belief in growing food organically while nurturing a beneficial ecosystem of plants, animals, and people. 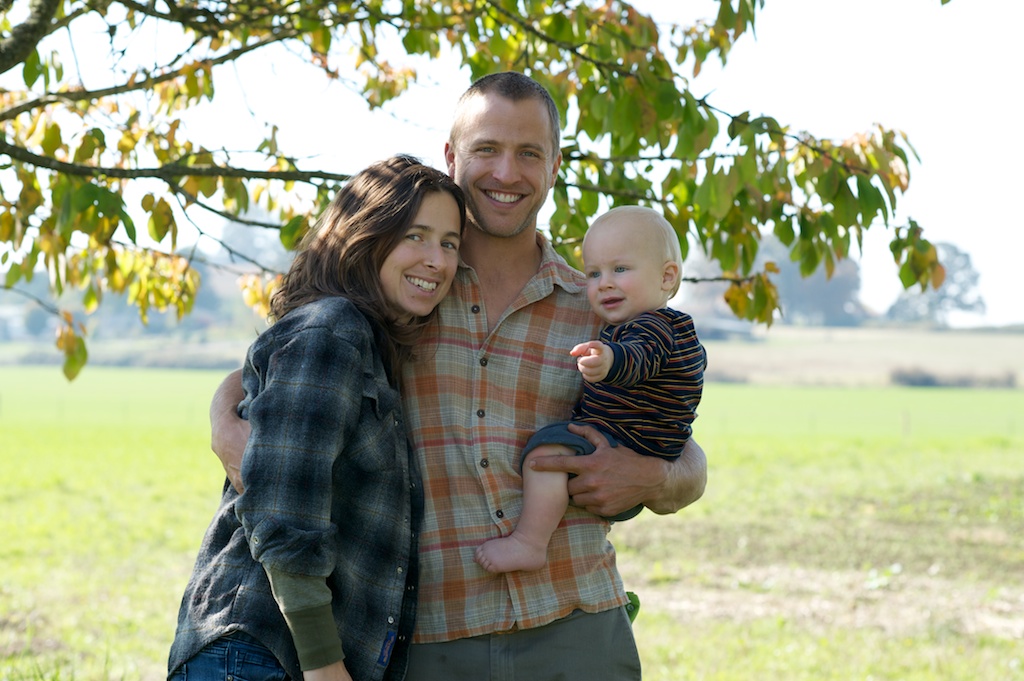