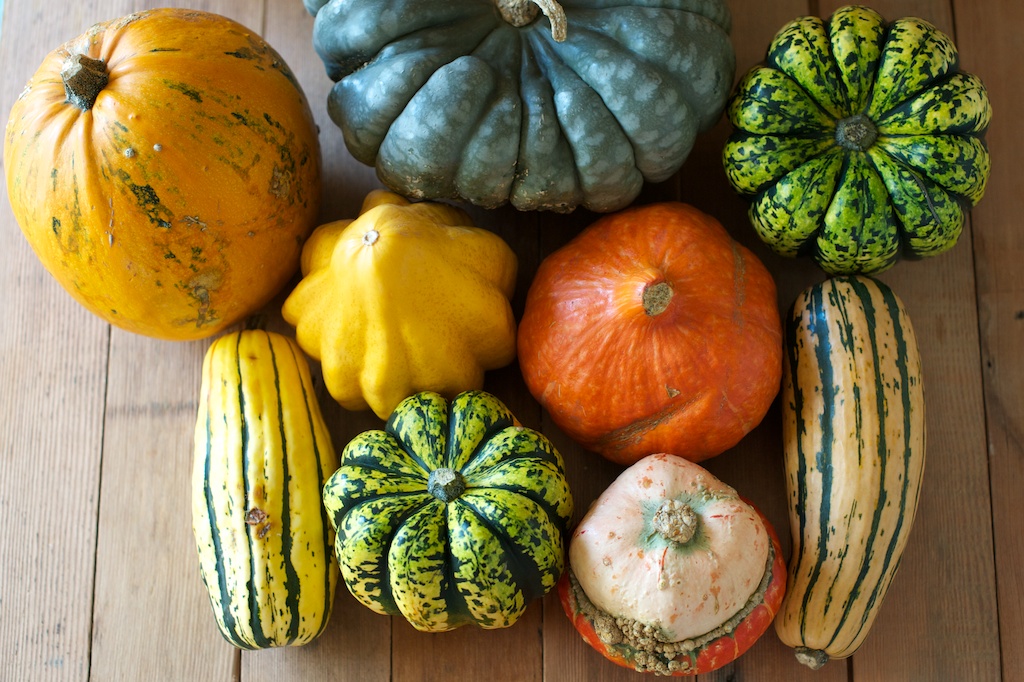 We stopped at People’s Coop several rainy Fridays ago, drawn to lower SE Portland with the idea of enjoying a smoothie from Sip before heading inside to re-fill a few bulk spice containers. After ordering our smoothie, we sat underneath the store’s awning, watching the store cat slink by, undeterred by the pelting raindrops. Besides the cat and the Sip employee inside the cart, we were by ourselves in the normally bustling courtyard. Instead of keeping my head down and my eyes focused, as I normally do when I’m in People’s slightly chaotic vortex of roaming toddlers, dogs, buskers, and bikes, I took the time to glance around at the outdoor displays heaped with winter squash.

I quickly noticed that the squash selection, all sourced from Mustard Seed Farm, extended far beyond an average display of winter squash. In bins situated beside familiar varieties like butternut, acorn, pie pumpkin, and delicata, sat boxes overflowing with varieties I’d never seen or cooked with before: Sugarloaf, Turban, Thelma Sanders, and Kakai pumpkin. And beside those unheard of varieties were squash with which I had only a passing familiarity: Red Kuri, Jarrahdale, and Carnival. 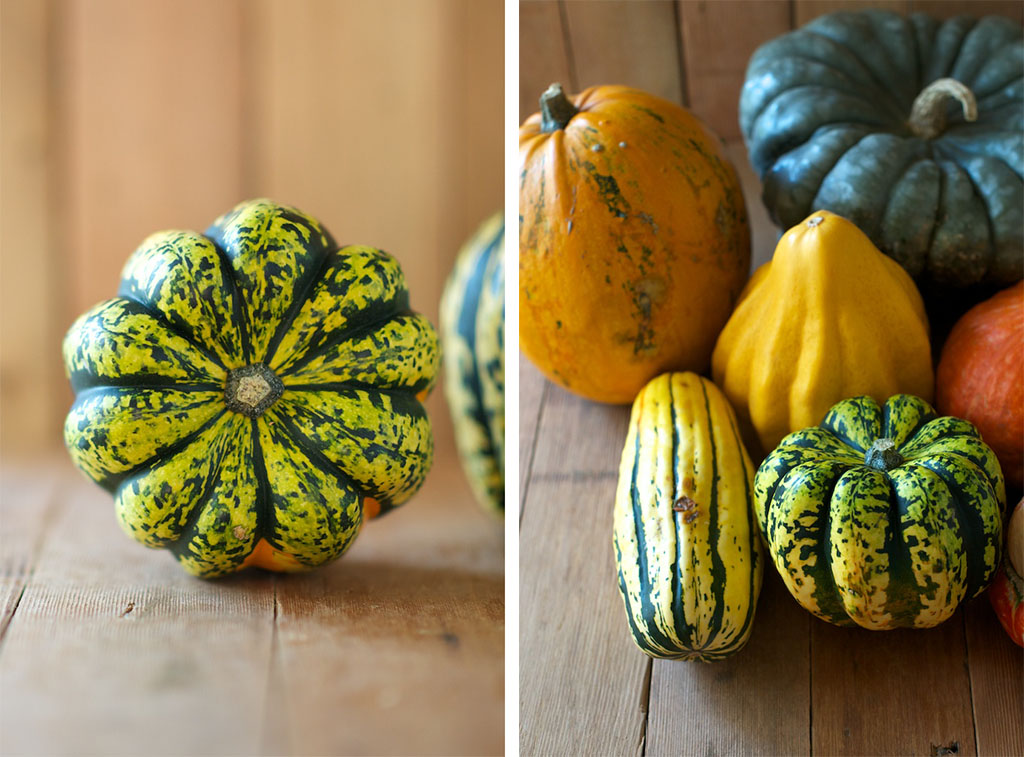 I originally picked up the Thelma Sanders, hoping that this heirloom variety might change my opinion on acorn squash (an opinion that includes words like bland, tough, and boring). But, as I tucked that squash underneath my arm, my desire to buy just one squash morphed into full-on food shopping impulsivity. While it’s very common for all of use to wander the grocery store making spontaneous, emotionally-driven choices – ice cream, a sale bottle of wine – I frequently feel my food shopping impulsivity rear up with seasonal vegetables. I regularly enter a farmers’ market with a clear idea of what I want to buy, and leave with two extra tote bags of vegetables. I buy with a hazy view of the future, thoughts bouncing around between photographing the vegetables, dinner that night, and sitting at my table scouring cookbooks for inspiration. I enjoy the entire process. Once this impulsivity takes hold, I’m powerless to stop it. 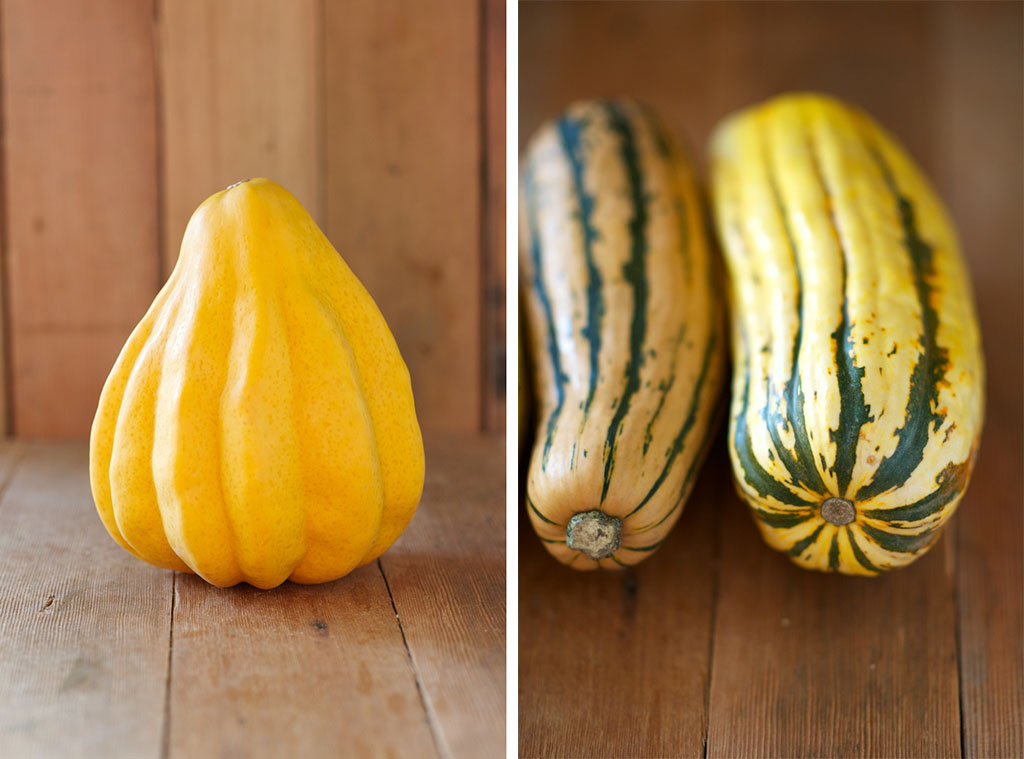 Which is why when we returned from People’s that evening, we lugged pounds of squash into our kitchen, from a giant blue-green Jarrahdale to an “is is this even edible?” Turban squash. As I assessed the squash cornucopia dominating our kitchen island, I felt grateful that I hadn’t impulsively purchased multiple varieties of a more perishable food. For the past two weeks, we’ve whittled down these eight varieties of squash, chopping them up before roasting or parboiling to make them the centerpieces of almost a dozen different dishes, from a squash and mushroom salad, to squash pizza, squash pasties, squash ravioli, and squash risotto. On tap for today’s kitchen experiments include a red kuri squash soup and pumpkin bread made from our remaining carnival squash. 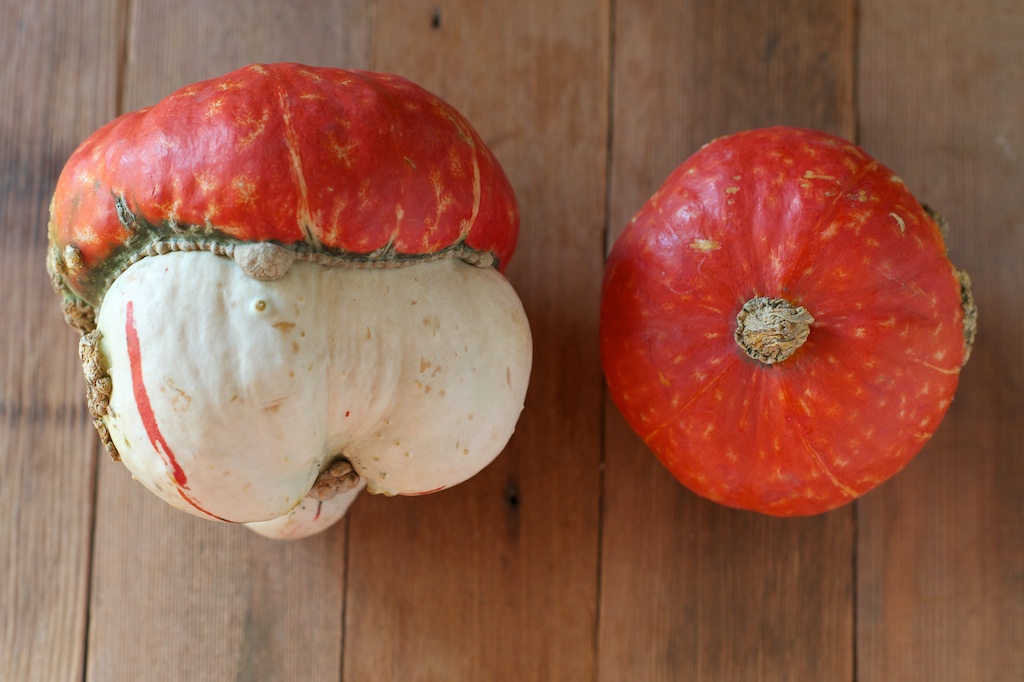 Most winter squash are members of the maxima species, identified via their yellow hued skin and softer stems. Winter squash not captured by this category belong to the moshata species, a group of long, tan squash, with butternut as its most prominent member. Acorn belong to the pepo species, home to many varieties of summer squash.

While I’ve mostly used the squash interchangeably throughout recipes (instead of seeking out, for example, Jarrahdale specific recipes), several distinct differences exist among each variety, including the accessibility of the “flesh”, the roasting time and caramelization, and the strength of flavor. When stored in a cool, dark place, you can keep winter squash for months without compromising flavor or encouraging rot. 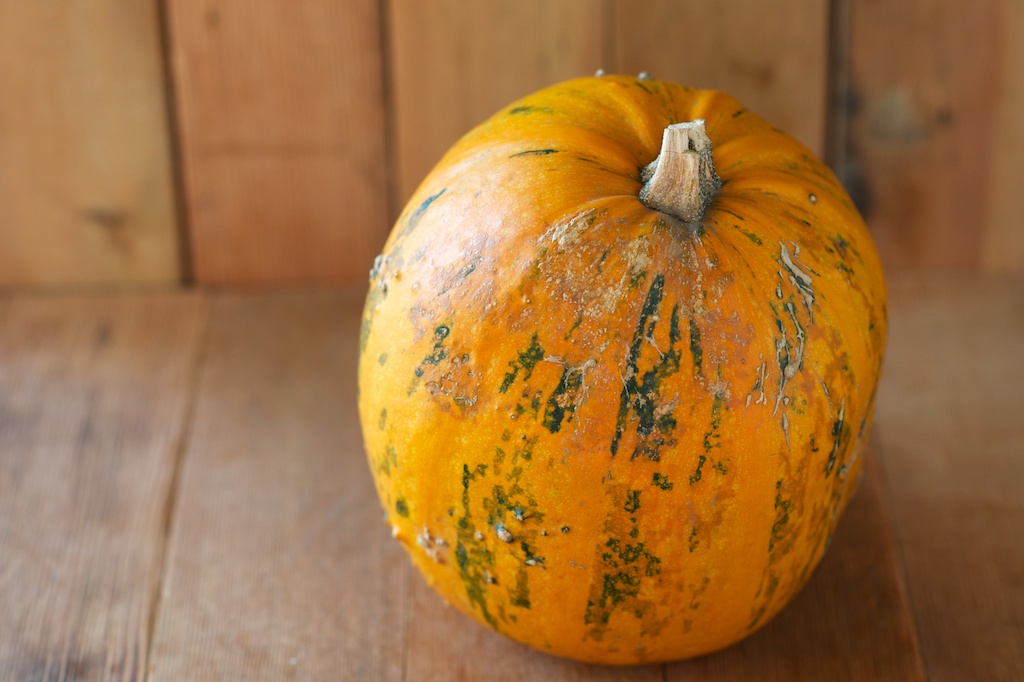 I’m starting with a description of the Kakai because it’s the only squash I purchased that isn’t as interchangeable as the others: you can only eat the seeds of this Austrian variety. When you cut into the squash, all you see are dark green seeds. After digging them out, place them on a baking sheet and roast them dry or with seasonings of your choice. 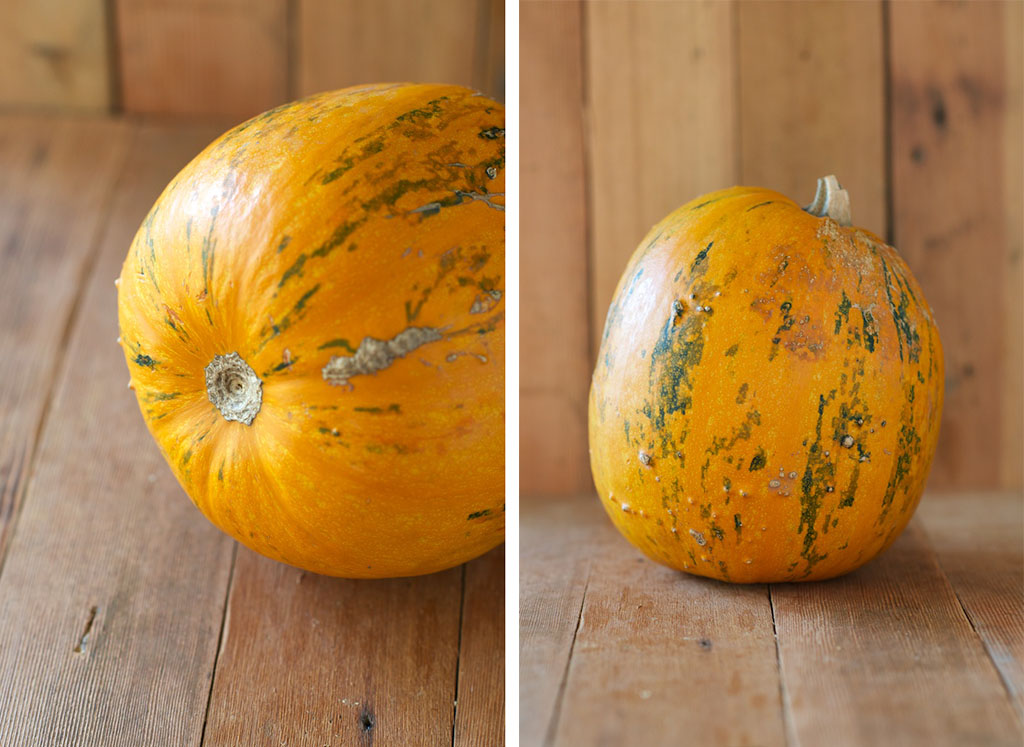 If you feel strange about only using the seeds from such a large squash, you can do as Happy Boy Farms suggests and use the halves as a soup bowl, or put a candle in the base, assuming the base is stable. 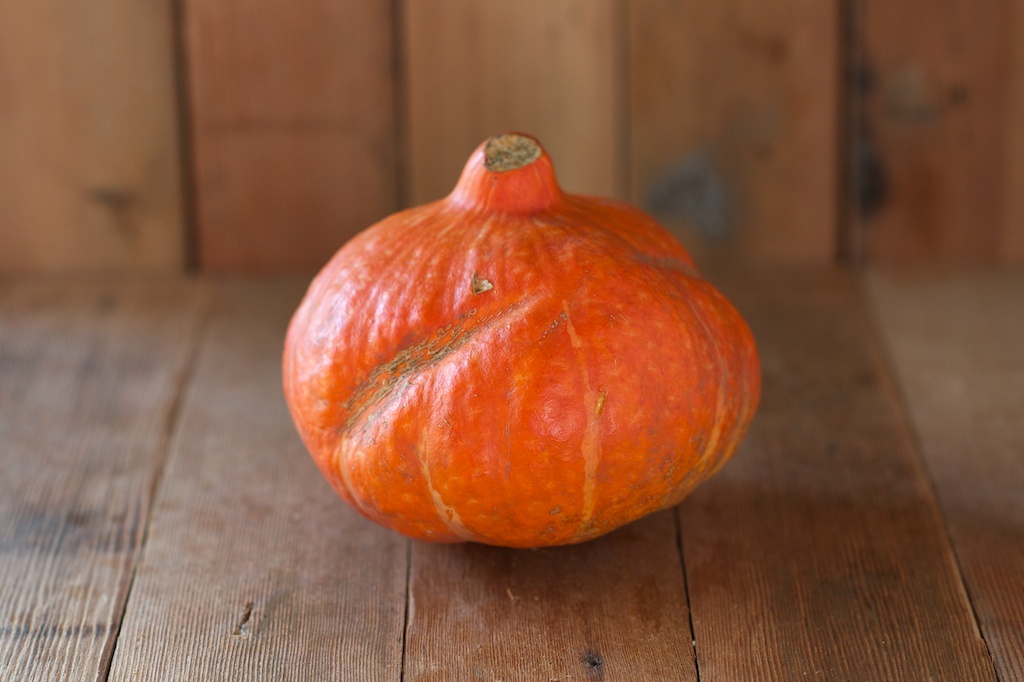 After the heirloom acorn squash, this was the second squash I picked up from the bins at People’s Coop due to its teardrop shape and red-orange skin. Red Kuri hails from Japan and has proven to be quite versatile; when roasted, the squash succumbs into a velvety tenderness. Red Kuri responds well to pureeing and is excellent in soups or as the main vegetable in a curry or stir-fry. 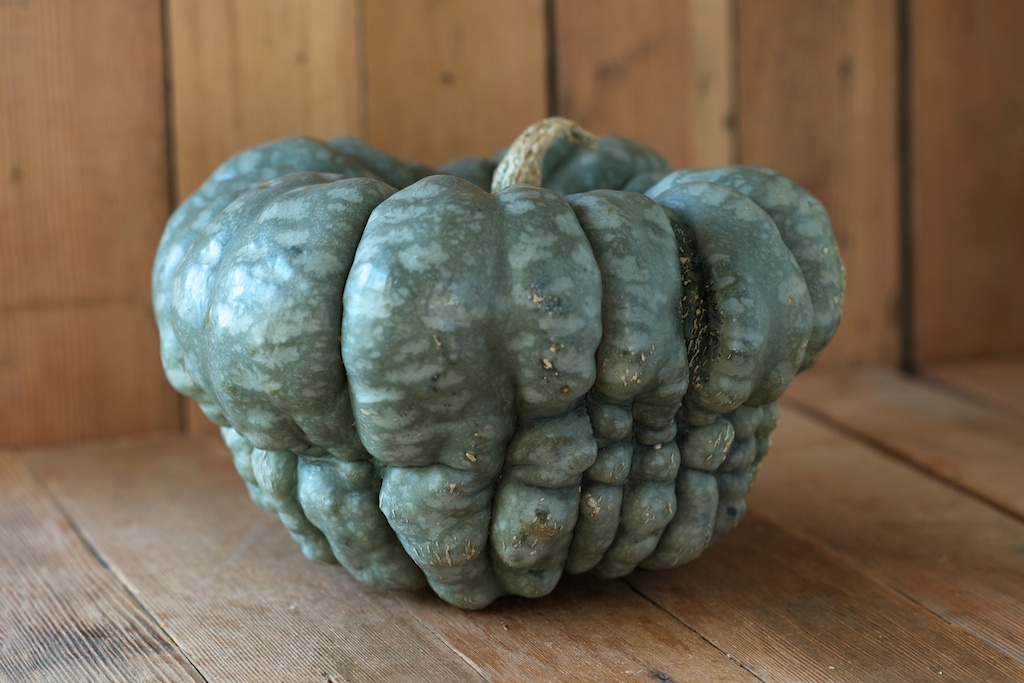 You might have spied a Jarrahdale or two on the front stoop of your neighbor’s house. A variety of squash from Jarrahdale, Australia, this winter squash is a cross between a Blue Hubbard and a Cinderella pumpkin. Once you survive cutting into one, the squash yields a mildly sweet flavor, with little stringiness. 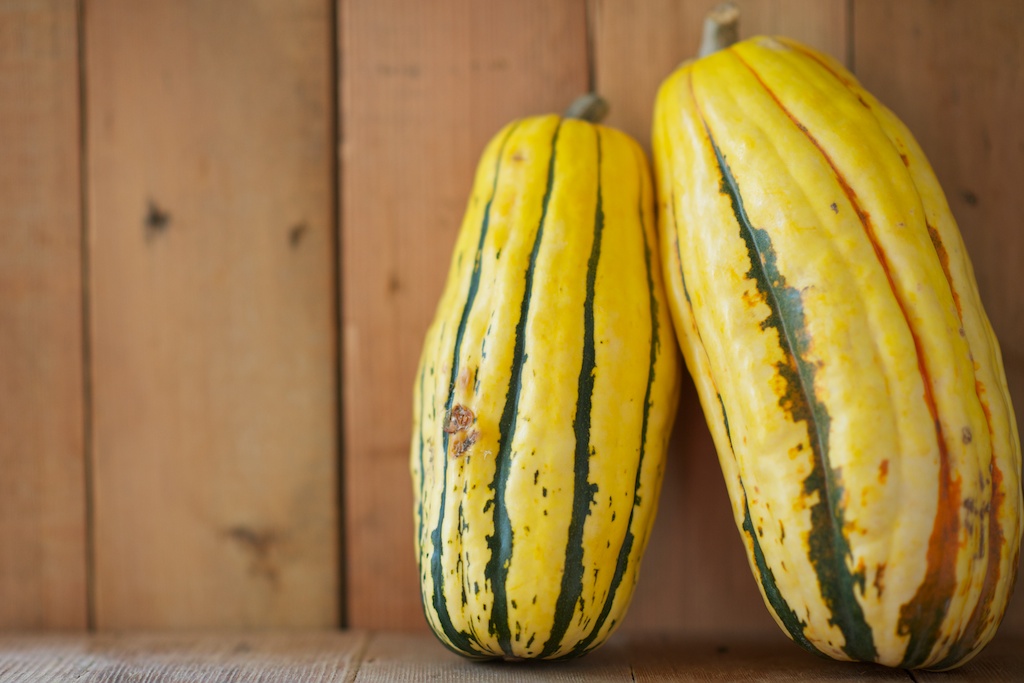 Delicata is one of the easiest winter squashes to prepare; there’s no need to peel them. Instead, simply cut the squash into half moons or chunks before roasting or sautéing. Similar to tofu’s morphable tendencies, delicata easily adapts to and draws in the flavors of whatever dish you’re making. I especially like to roast delicata squash in a miso-curry sauce, via Super Natural Everyday. 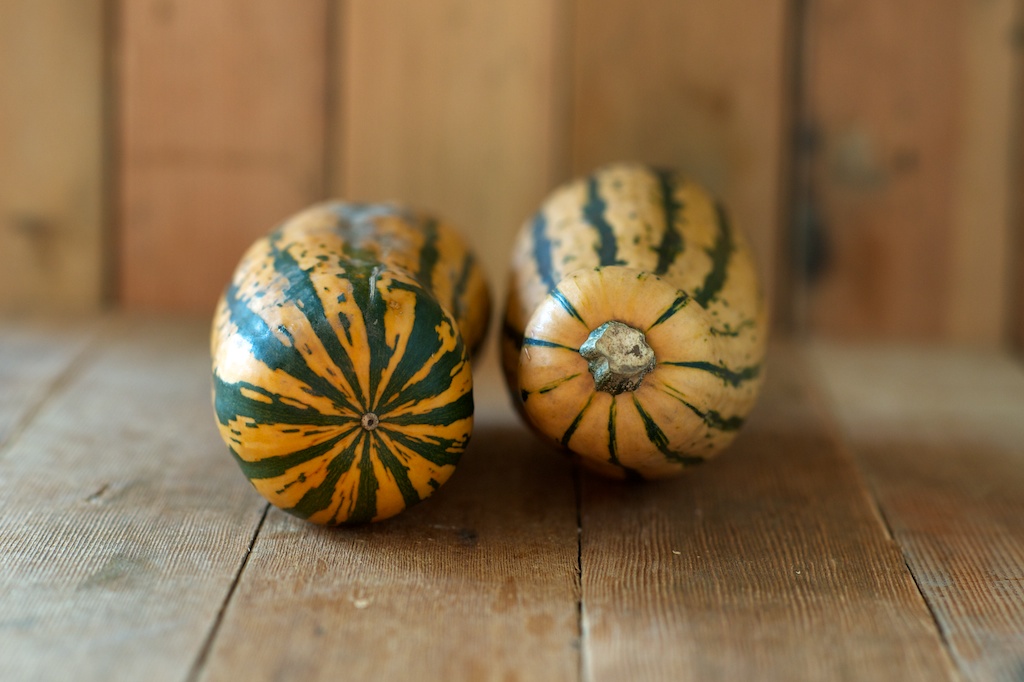 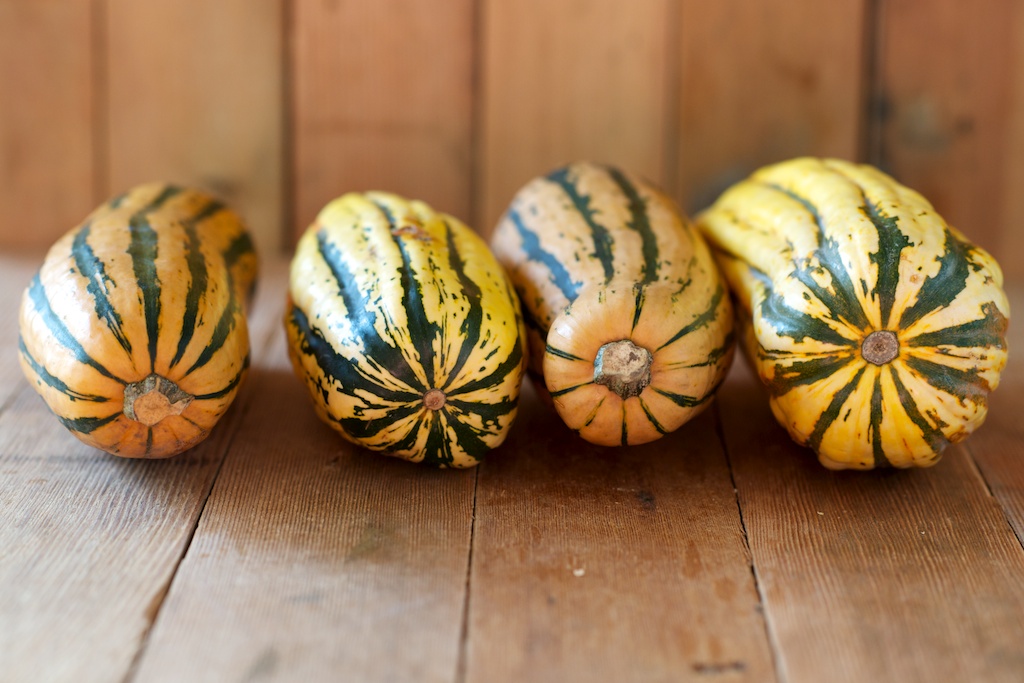 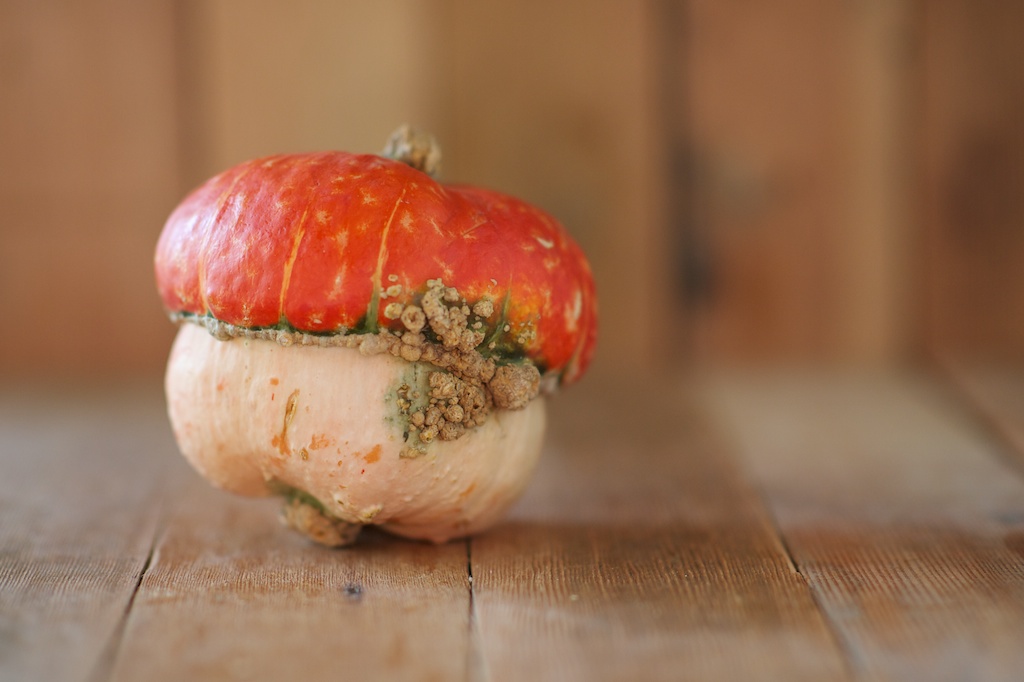 Turban squashes are an heirloom variety, related to buttercup squash. I spent about 15 minutes cutting up the two Turban squashes. When I finally finished, my compost bowl had more in it than the roasting pan. The resulting squash is incredibly mild, with firm flesh even after roasting. I was happy to cook with this unique squash, but I think it’s best used decoratively or, if you’re feeling Martha Stewart-ish, as a soup tureen. 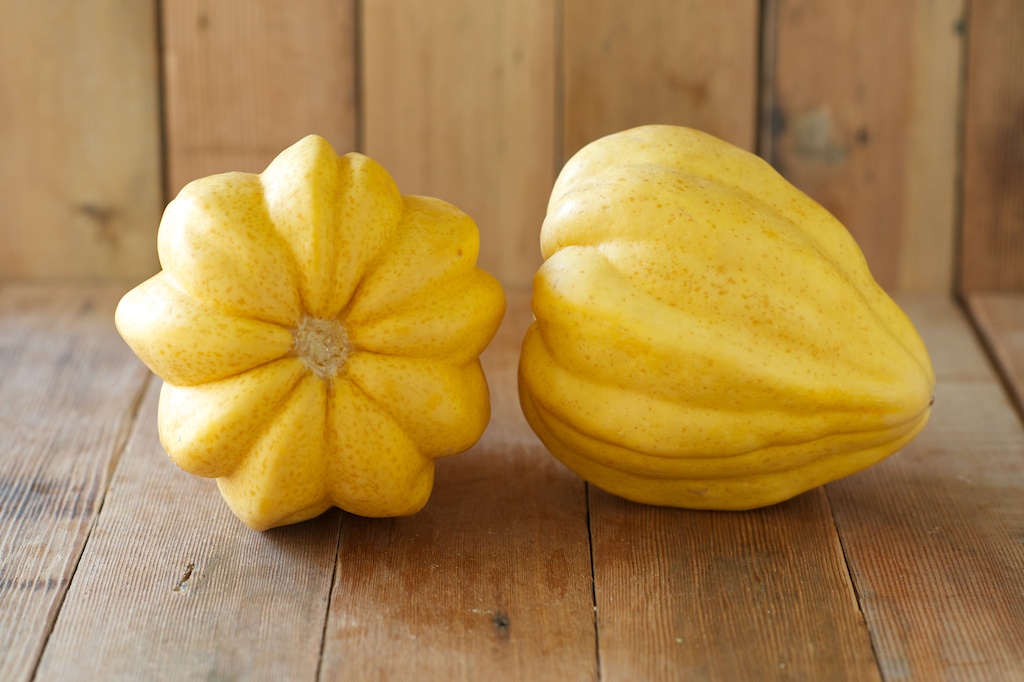 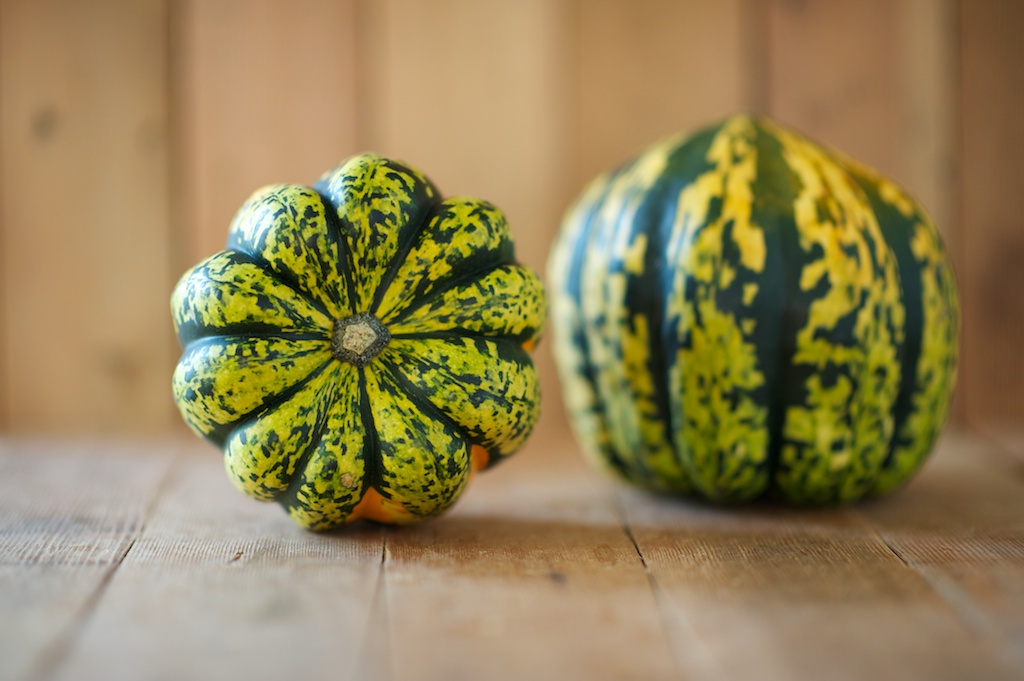 Carnival squashes, especially when smaller and clustered all together, invite the words “fall”, “autumnal” and “harvest”. It wasn’t until a few years ago that I realized that these squash had a place outside of a tablescape or mantel. 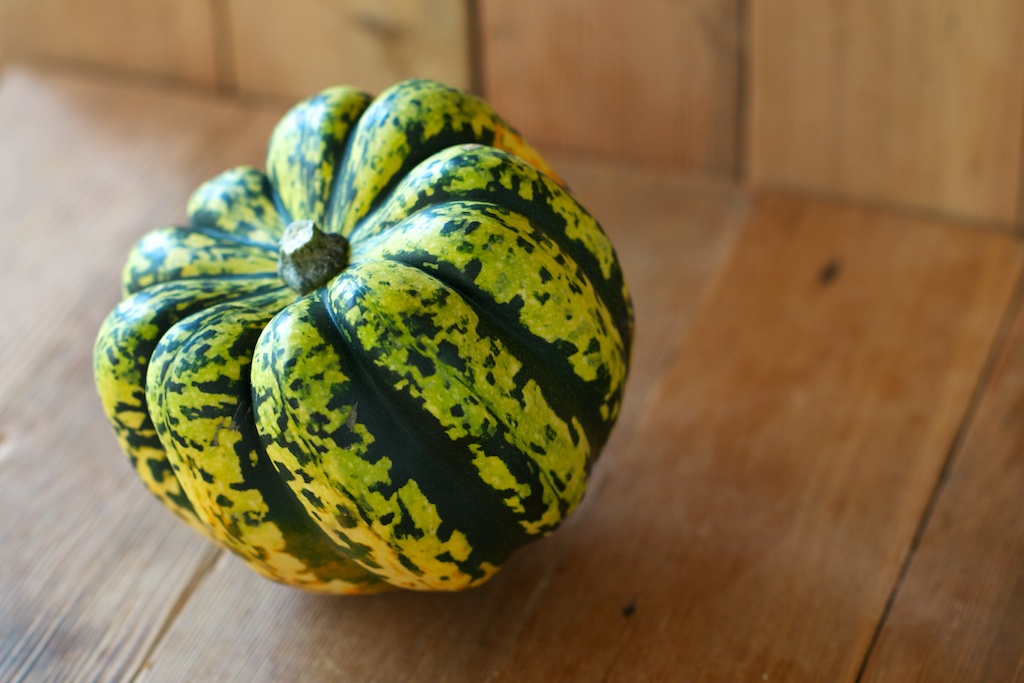 Carnival squash is a cross between the sweet dumpling squash and a standard acorn squash. They taste sweet and rather uncomplicated, much like a butternut squash.