Rhubarb never overstays its welcome at the farmers market:  it shows up, people flock around the bins, and then it's gone.  Since rhubarb is available for such a short time (and in small quantities, at least this year), I purchased several pounds worth last weekend from Wilklow Orchards, with the plan of figuring out what to do with it later.  If I drew a blank, I knew I could always make a cobbler or puree.  On the walk back from the market, I remembered that I'd bookmarked several rhubarb entrees from last month's La Cucina Italiana. 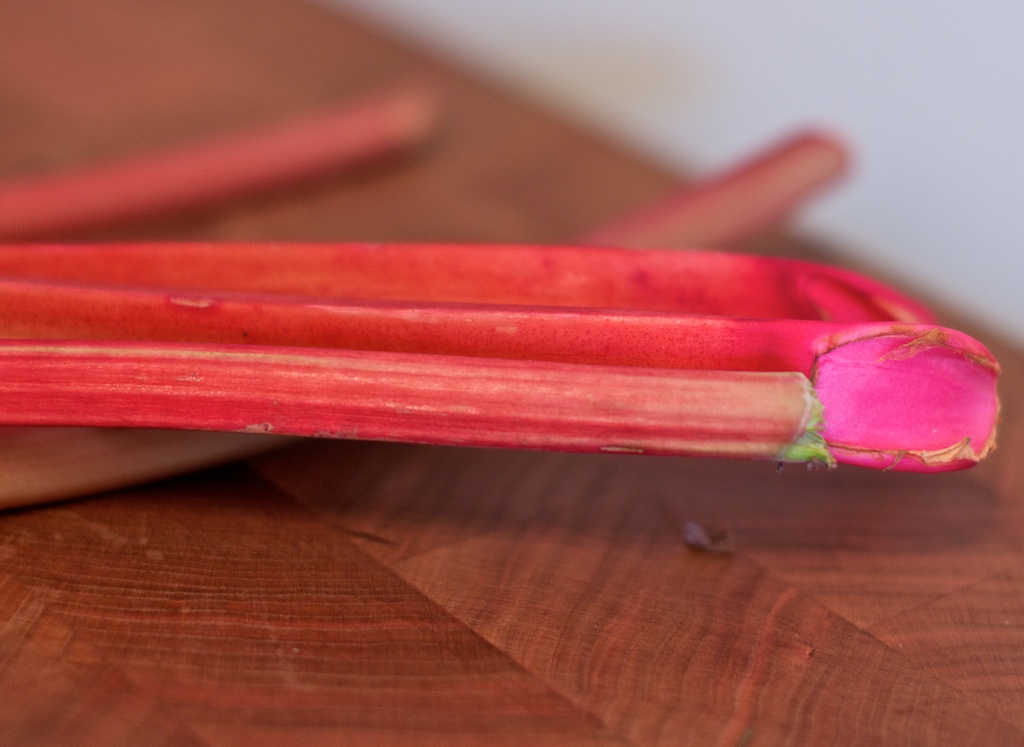 You may remember the 4 hour rhubarb cake was also courtesy of La Cucina Italiana; in fact, a large section of last month's magazine was dedicated to this vibrant pink stalk.  Even though rhubarb is a vegetable, I think I'm trained to like its bitter taste only when paired with or in something sweet, be it a jam or one of many desserts.  Because we already have a few reliable rhubarb desserts, we were curious to taste rhubarb in an entree form. 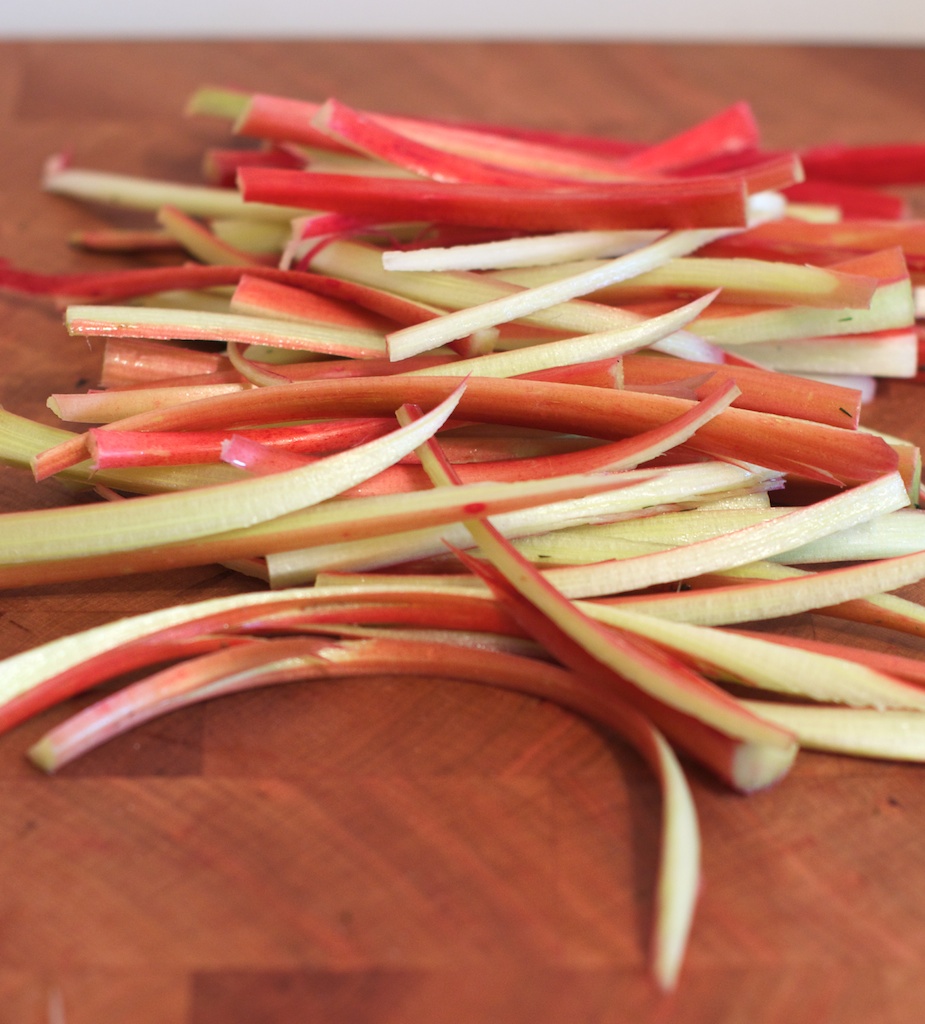 One recipe--a sweet and sour rhubarb soup--was an utter disaster.  Nothing went wrong, exactly-- we just abhorred the taste.  Which is too bad, because the bowl and presentation were quite eye catching.  However, I could only have a few sips before pushing the bowl out of my sight.  It was sour and, frankly, inedible. 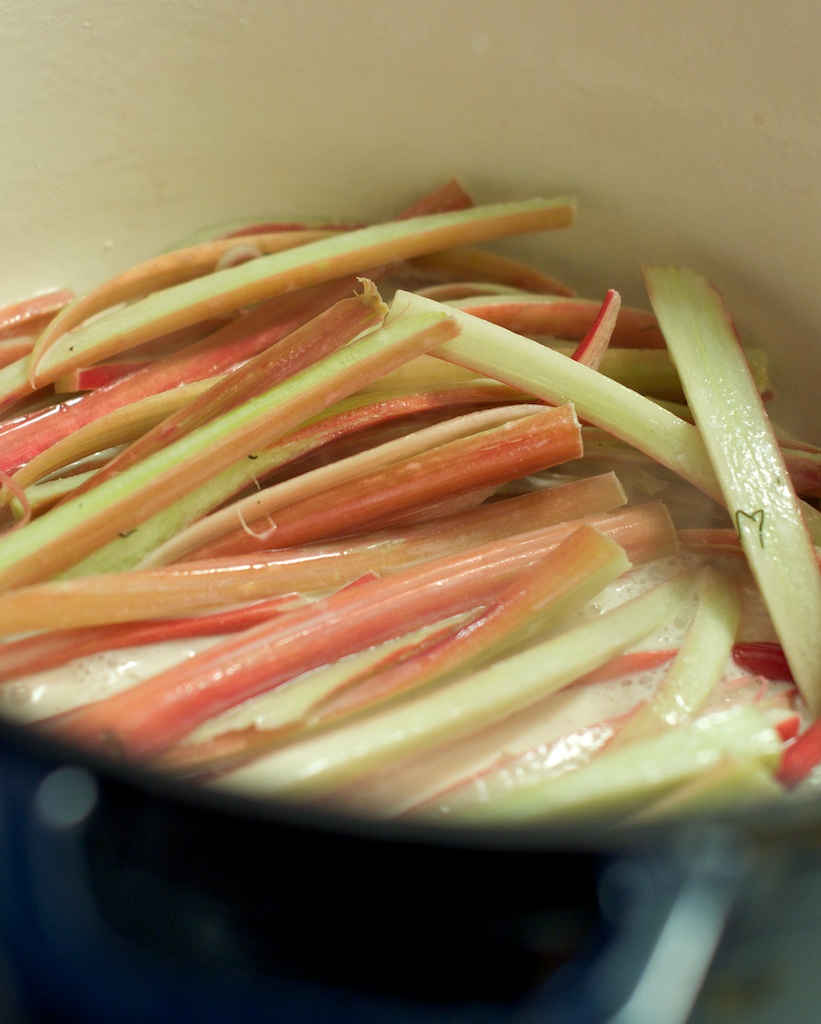 We had more success with the other rhubarb entree we tried--Tagliatelle with Rhubarb and Fresh Dill.  Instead of making our own pasta, as the recipe suggests, we opted to buy tagliatelle at the store.  By not making the pasta, we halved the time allotment to a convenient half hour.  This recipe is a simple way to show off fresh rhubarb--just be sure to also have fresh dill as they're both stars on this plate.  By combining tart rhubarb and fresh dill, I really felt like I was eating straight out of my imaginary garden.  If you see rhubarb at the market and want to try something a bit different, try this recipe (but avoid any rhubarb soup recipe you find!!) 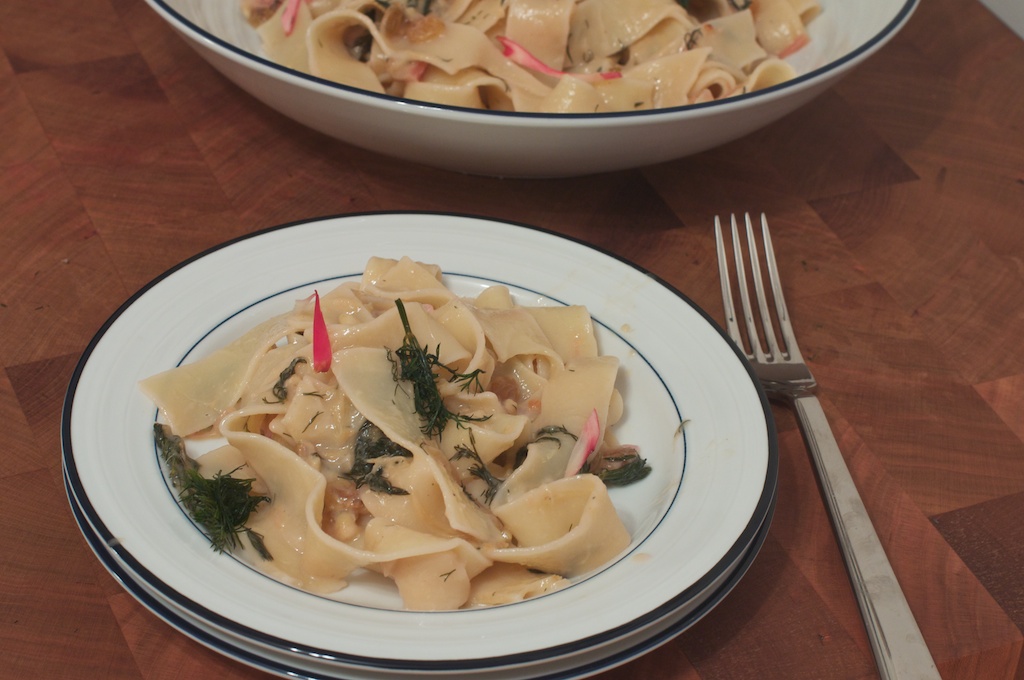 Tagliatelle with Rhubarb and Fresh Dill

5 tablespoons golden raisins, soaked in warm water for 10 minutes, and then drained

1)  Cut each rhubarb stalk crosswise into 3 pieces, then thinly slice lengthwise.  In a large saucepan (or Dutch oven), combine the wine, cream, shallot, and a 1/4 teaspoon of salt.  Bring this to a simmer for 1 minute.  Add the rhubarb and continue cooking, stirring often, for 5 minutes.  Remove from the heat and set aside.

2)  Begin to cook pasta in boiling water, until tender.

3)  In a medium skillet, combine the butter, raisins, and pine nuts.  Cook until the butter is melted and flavors merge, about 3 minutes.  Stir in dill and cook for 1 more minute.  Remove from heat

4)  Drain pasta, reserving 1/4 cup of pasta water.  Transfer the pasta to a serving bowl, add the cooking water, the pine nut mixture, the rhubarb mixture, and salt.  Toss to combine and serve.