Edible Communities is a network of local food magazines. In my area, I’m able to pick up Edible Brooklyn, Edible Manhattan, and Edible East End. Their first magazine, Edible Ojai, started in 2002 and quickly garnered a loyal, passionate following. Edible Cape Cod followed shortly after and now there are over 60 Edible magazines published throughout the country. When traveling, we love picking up the region’s Edible magazine and comparing articles and regional food differences.

Edible Communities celebrates local food communities by exploring the stories behind our food: stories of artisans, chefs, farmers, and restaurants that are all striving to create their own unique place in the food world. Edible doesn’t shy away from more delicate food issues, either. A recent Edible Brooklyn profiled the deficit of regional slaughterhouses in New York State. The lack of slaughterhouses forces small, humane farms to process their animals in the same facilities that factory farmed animals are processed. This presents a slew of problems including horror stories of meat disappearing or getting the wrong meat back.

The latest Edible I bought was not a magazine but a book: Edible: A Celebration of Local Foods. The book is divided into regional stories and seasonal recipes. This is one of the most inspirational books on our cookbook shelf; as soon as I flip through it I feel excited and passionate about food. The recipes themselves cater to a whole range of eaters: carnivores, vegetarians, and those with a sweet tooth. 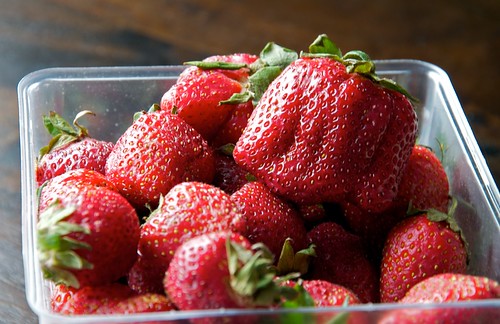 In New York, the first strawberries are just now coming into season; most farmers haven’t harvested them yet, but there are a few farms with an earlier crop. I excitedly picked up my own carton at the market the other day, then promptly flipped to the spring recipe section of Edible and found a recipe for “The Best Strawberry Shortcake’. I haven’t had homemade strawberry shortcake in a long time. Strawberries, a biscuit, and whipped cream is one of the simplest combinations around, and one of the best.

We had planned to make our shortcakes to eat with Lost, but we ran out of time. The next morning we sprung (dragged ourselves) out of bed and made the shortcake for breakfast. The shortcakes were easy to assemble and quick to bake. The thing that took the longest was the homemade whipped cream because Justin made it with a hand whisk (though, we do have an electric hand mixer…I’m not sure why we didn’t use that!). 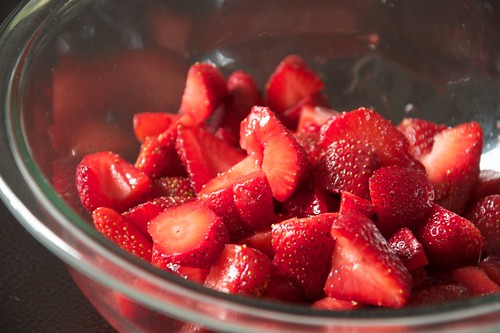 The shortcakes’ tender pastry and naturally sweet topping successfully banished the sleepiness I felt before cooking. And while it seemed slightly decadent to eat whipped cream for breakfast, Justin and I joked that we had all of the components of a healthy breakfast: dairy, bread, and fruit. Try the recipe out for yourself. You only need about 25 minutes, so no excuses! 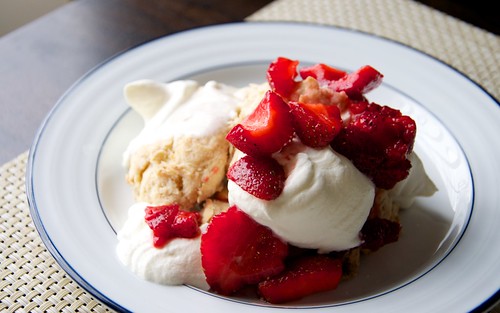 In a large, shallow-rimmed bowl, mash about one-quarter of the strawberries with a fork. In a large bowl, toss together the mashed strawberries, unmashed berries, lemon juice, and maple syrup. Set aside, stirring occasionally.

Preheat oven to 425˚F. Line a 9-by-13 inch baking sheet with parchment paper. In a large bowl, whisk together the flour, sugar, baking powder, cinnamon, and salt. Using a wooden spoon, stir in the cream. Mix until the mixture comes together in a sticky, crumbly mass. Transfer the mixture onto a lightly floured work surface. Using floured hands, knead the dough only a few times until the mixture forms a soft dough. Do not overknead.

Divide the dough in half and shape each half into a 5-inch round. Cut each round into quarters. Place each quarter onto the prepared baking sheet, leaving a few inches between. Brush each quarter with melted butter. Bake until the tops are golden, 12 to 16 minutes. Remove the shortcakes to a cooling rack to cool completely.

Combine the cream and the syrup and beat with a stand mixer or hand mixer at medium-high speed until soft peaks form.

Split each shortcake in half crosswise. Place the bottom half on a plate. Spoon some of the macerated berries and large dollop of whipped cream on top. Place the top half of the shortcake on top, add more berries and their juices and whipped cream. Garnish with crystallized ginger, if using, and serve immediately.