Every time we wave goodbye to the maitre d’ and waitresses at Juventino and head back to our apartment, Justin and I take turns remarking: “How did we not come here before moving to Park Slope?” After all, even when we lived in another Brooklyn neighborhood last year, we averaged brunch at Rosewater every other weekend, before trekking up the hill to the Grand Army Plaza Greenmarket.

Before moving to Park Slope, I only knew about Get Fresh Table and Market from Top Chef Mark Simmons’ previous association with the restaurant. Last year, Brooklyn Based profiled Mark Simmons and his new job as executive chef at Brooklyn’s Melt. The article stated that he had left his job at Get Fresh to take this position. (As a side note, Simmons has since left Melt. And be warned: the restaurant is mediocre without him!) 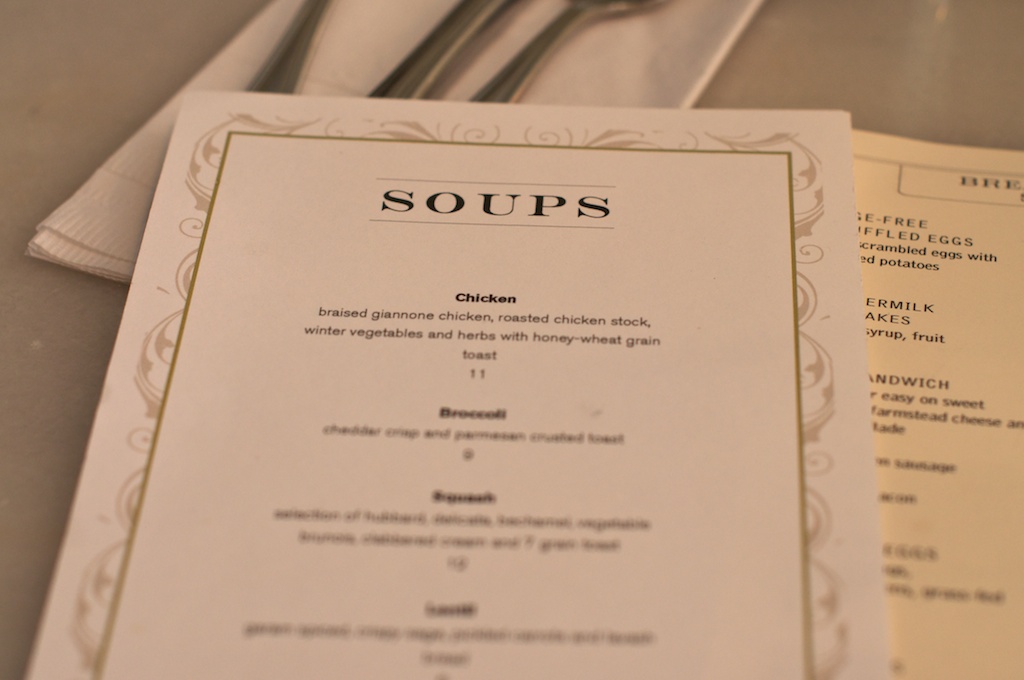 Get Fresh was recently renamed Juventino after the current head chef, Juventino Avila. A new name or not, the restaurant’s focus remains true to its original name. As a Slow Food approved restaurant, Juventino is committed to local sourcing and building relationships with its purveyors. We first stopped by Get Fresh in November—back when it was still named Get Fresh-- for brunch. We were immediately impressed with the interior space, the friendly manager, and the general vibe of the restaurant. The left side of the restaurant is lined with my dream collection of cookbooks and food books, from the River Cottage series to newer books like Harvest to Heat, Grub, Righteous Porkchop, and Tartine Bread. The shelves above the books are functionally attractive, stacked with rows of milk bottles, seasonings, dressings, olive oils, and grains. Though the items effectively contribute to the farm-to-table aesthetic, they’re not just for show: we’ve frequently had waiters reach over our table to grab a specific ingredient.

The menu, be it brunch, lunch, or dinner, contains a stunning array of creative seasonal options. A few weeks ago, during one of our never-ending snowy days, we dodged slush puddles to eat lunch at Juventino. In actuality, the lunch menu remains the same as the brunch menu, with breakfast options and more ‘lunchy’ items. When we’ve eaten at the restaurant for brunch, I’m always in a pancake or egg mood, excitedly ignoring the lunch part of the menu. This time, I did the opposite. 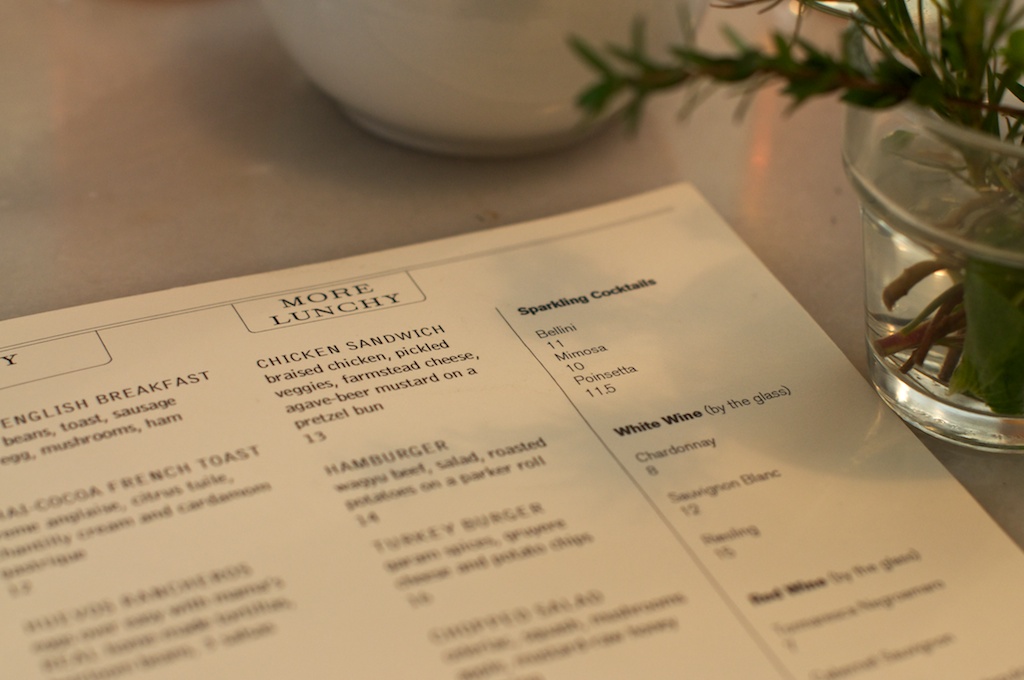 After scanning the lunch menu for all of the vegetarian options, we realized we wouldn’t be able to order every option. Beyond being unnecessarily gluttonous, ordering each of the many vegetarian options would easily swell our bill to a number that would blow our lunch budget for the whole week. When ordering lunch, diners can be as creative as they wish, choosing between a bread board, an array of vegetable sides (roasted potatoes, garlic greens, cheese polenta), soups, salads, a wrap and macaroni and cheese. After ordering iced tea, we debated between lentil, squash, and broccoli soups before deciding on the former two, mainly because I had already eaten the broccoli soup at a previous dinner. 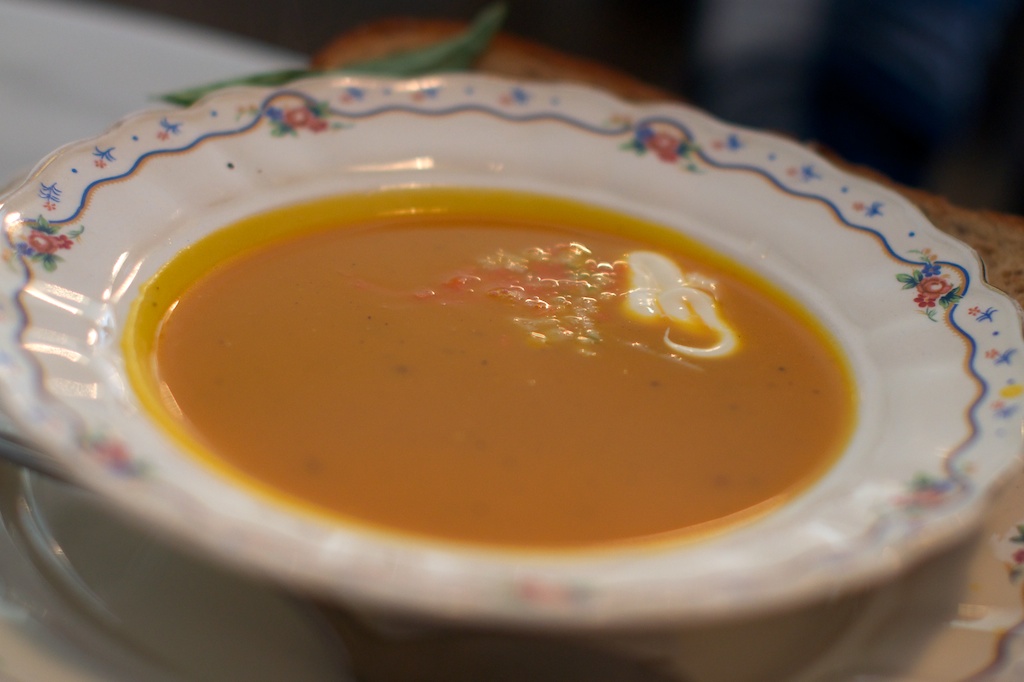 The squash soup ($10) and lentil soup ($9) charmingly arrived in vintage china bowls. A chilly day calls for heart-warming soup, which is exactly what these were. The squash soup’s buttery, thick texture blended perfectly with a slightly pungent dollop of cream that I swirled in. The soup reminded me of digging into a freshly roasted slice of squash, and the side of country bread served as a fitting dipping utensil. 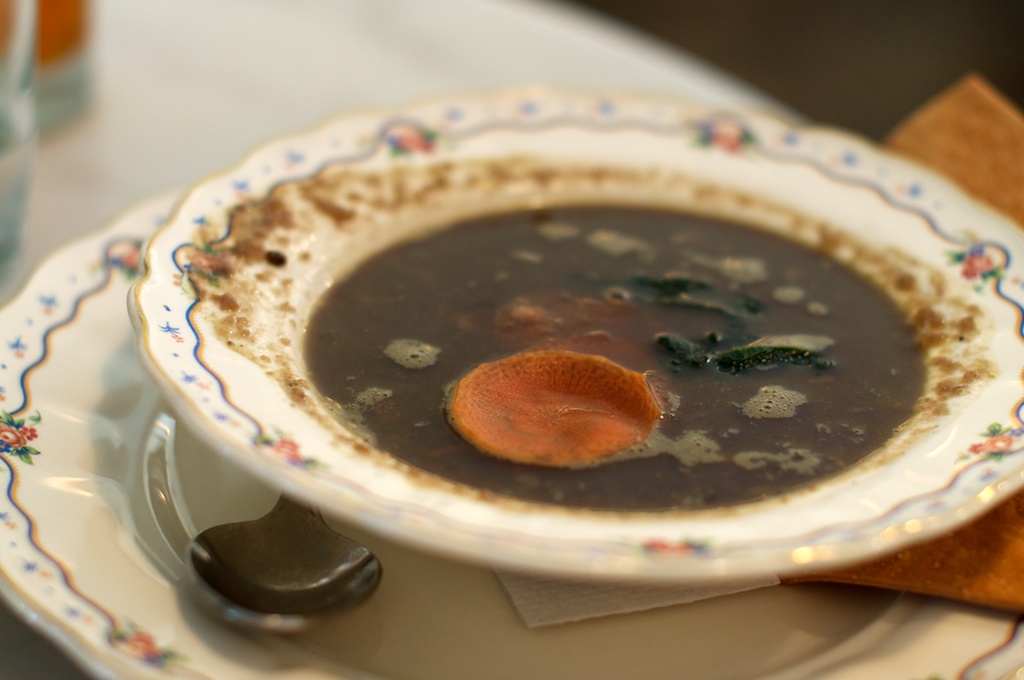 In contrast, the dark, earthy lentil soup presented a more complex flavor profile. Along with its aggressive flavoring of cumin and other spices, the soup was akin to a lentil version of a black bean dip. It was tempting to simply dip the soup with the hardened bread instead of using my spoon. We both would have appreciated a few more carrot slices, as the few we had added a welcome balance to the soup’s spice. 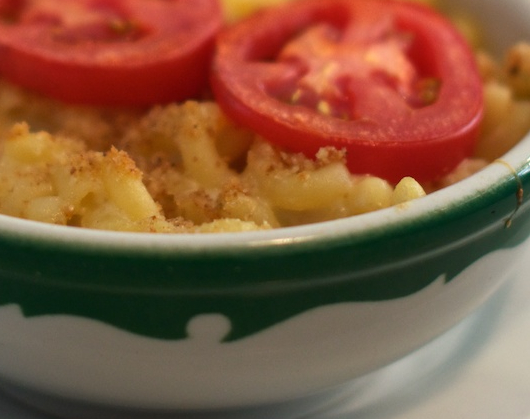 Having whet our appetites on the soups, we eagerly anticipated our main lunch course of macaroni and cheese ($7) and a grain salad ($10). The macaroni and cheese was delivered to our table lightly crusted with breadcrumbs and piping hot. In contrast, the grain salad appeared elegant and understated, with the grains peeking through a generous portion of Satur Farms’ greens. Both of us were quick to proclaim the macaroni and cheese as some of the best around. The dish managed to toe the line between fully flavored and understated. As we hoped, Justin—who had the majority of this dish—left full. 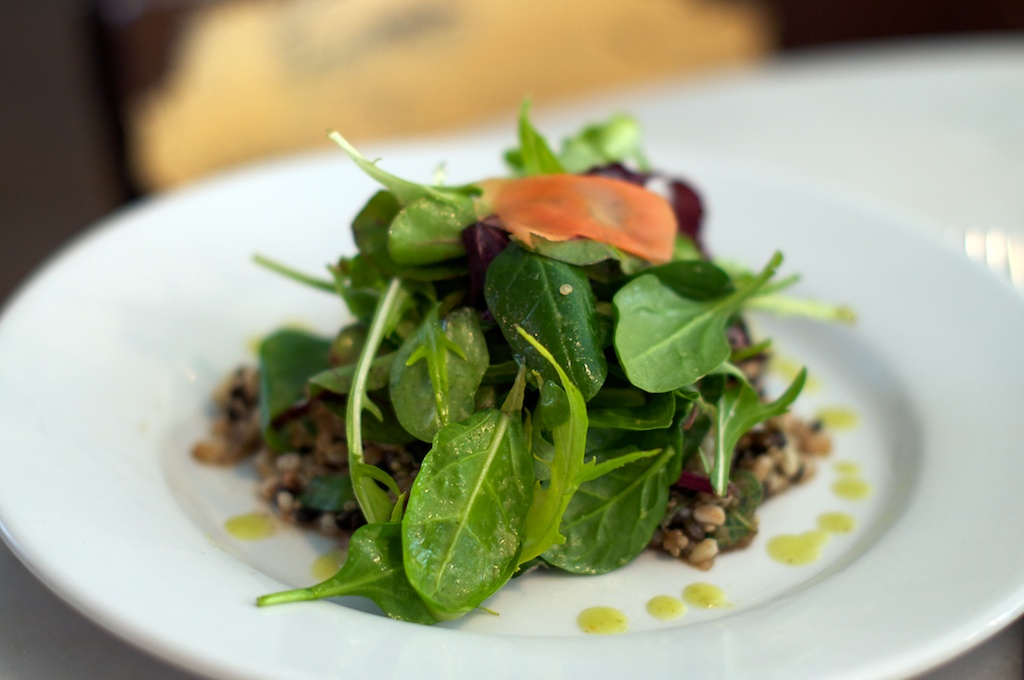 Chef Juventino composed the grain salad with farro, lentils, barley, and quinoa, topping it with a tomato vinegar and green apple dressing. I thoroughly enjoyed the interplaying textures of the grains, especially noting how the grains crunched in a pleasing fashion with the healthy greens. The salad equaled a fresh, clean dish on a slushy, grey day. Unfortunately, as is often the case with grains, I was starving an hour later—and without a snack partner-in-crime because Justin was still pleasantly full from his mac and cheese. Because the grain salad is $3 more expensive than the macaroni and cheese, I would only be tempted to order the dish again if I requested that the portion size be increased.

Juventino is a neighborhood gem that prides itself on creative ingredients, ethical sourcing, and full flavored preparation. Despite my tendency to bore quickly of lunch options, even if I ate there weekly for lunch, I can’t picture myself becoming unenthused about the choices. Most lunch options, including the fish and meat entrees, are $14 or less. By combining our soups with an entrée, our lunch averaged out to $17 each, $20 if you include the iced tea. This isn’t a cheap lunch bill by any means, but we did specifically order multiple items. We also realize that our money actually means something: it enables Juventino to continue to source amazing ingredients and create thoughtful entrees, even for lunch.

Where: Juventino (nee Get Fresh Table and Market)