On the steaming hot Friday afternoon of Memorial Day weekend, I subway-ed to The Entrepreneur Space, an industrial kitchen in Queens, to watch Rachel Gladfelter bring apple and chocolate cream pies to life. 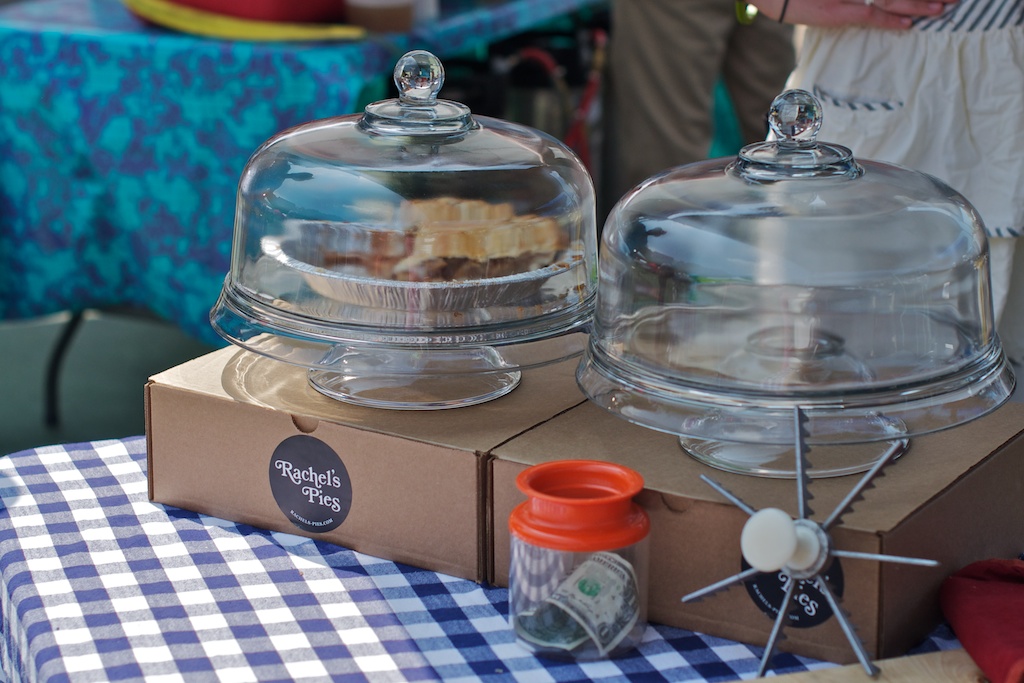 I’d first tried Rachel’s Pies at the inaugural Fort Greene Brooklyn Flea of the summer.  Despite the pies’ appeal, I was too full for a whole slice but Rachel happily gave me a generously sized sample.  After eating the small piece of apple pie, I realized I’d made a mistake:  instead of eating pizza, a pupusa, and a doughnut (I was sharing!), I should have started with pie. 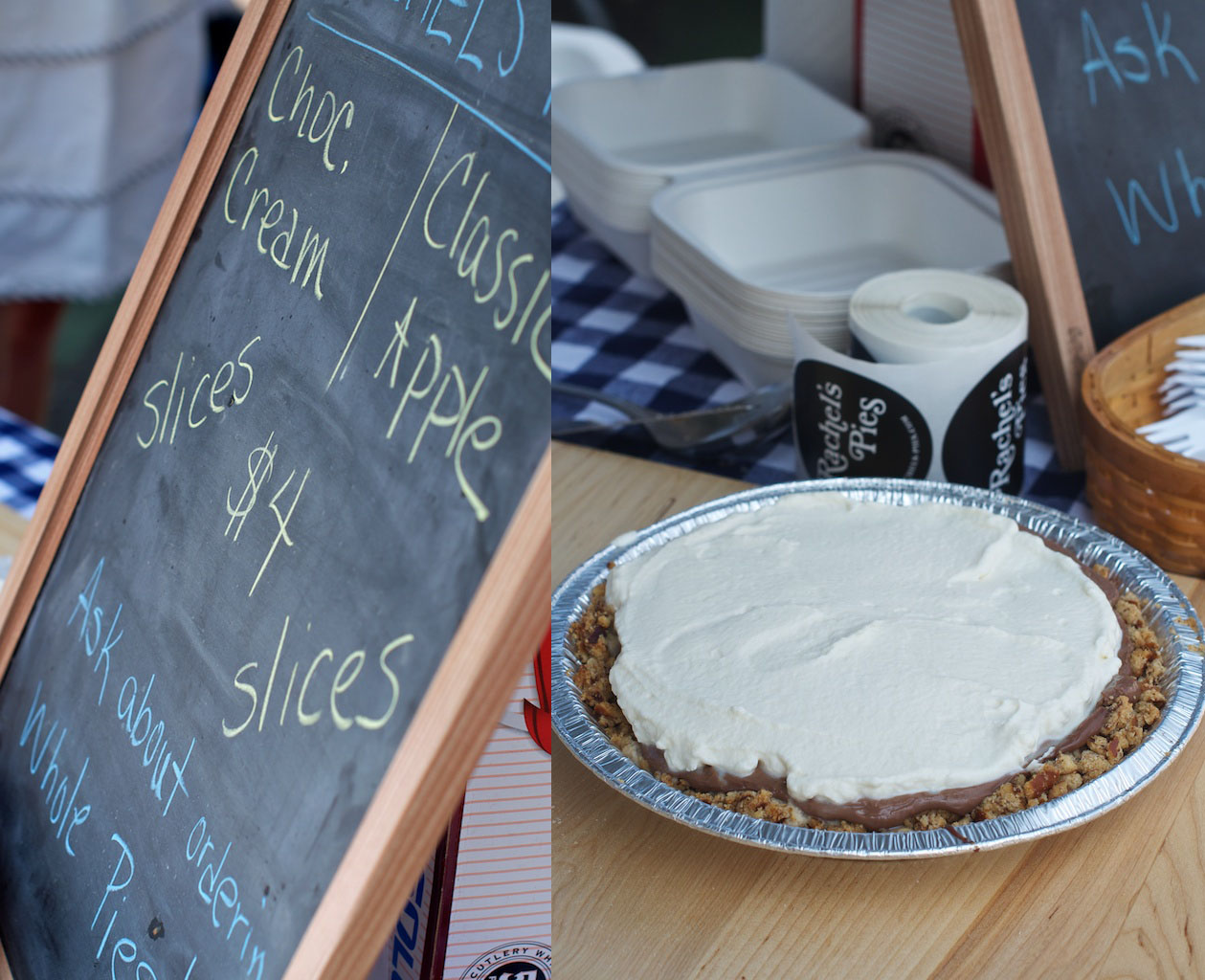 You know how some diners and restaurants exhort you to ‘Try our home made pies?’ or proclaim ‘Our pies taste homemade’?  And you order a slice, expecting something sublime?  Rachel’s pies provide that homemade taste I’m frequently looking for and often can’t find.  When I hear the word homemade, my brain generates a pre-assembled image:  a rustic table laden with dough and wooden rolling pins, gingham aprons, bowls of fruit, an open window with a breeze trickling in.  A slice of pie on the porch, savoring season’s best flavors. 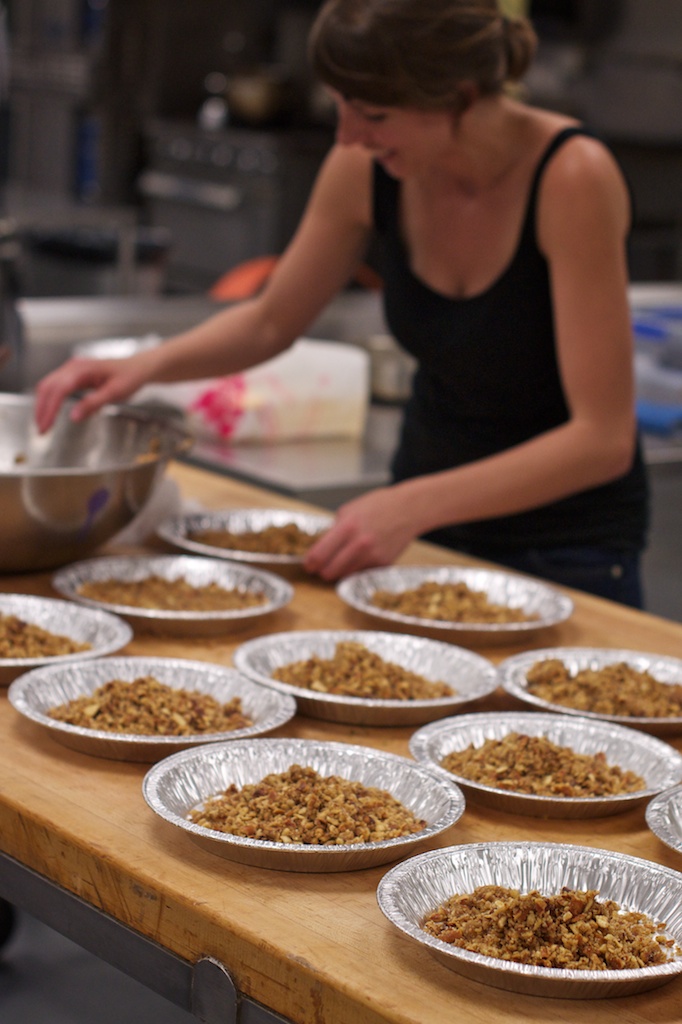 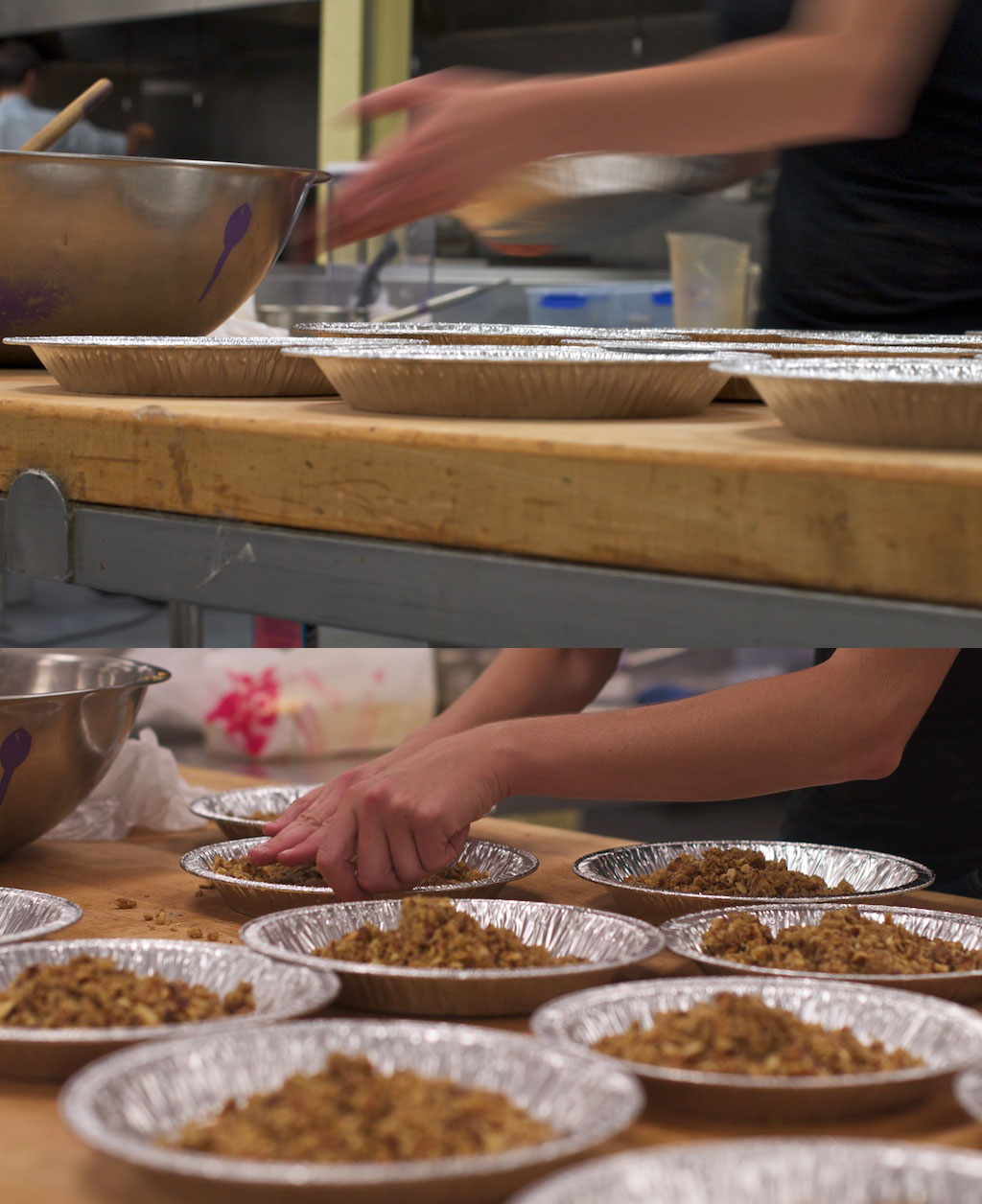 Some restaurants may aim for this nostalgic image, but that image screeches to a halt as soon as you take your first bite. Homemade?  Not quite.  In contrast, a bite of Rachel’s apple pie immediately queued up that bucolic vignette I described above.  The tart apples, cinnamon, and nutmeg are pillowed by a flaky, buttery crust.  It’s not heavy, it’s not complicated:  it’s just good. 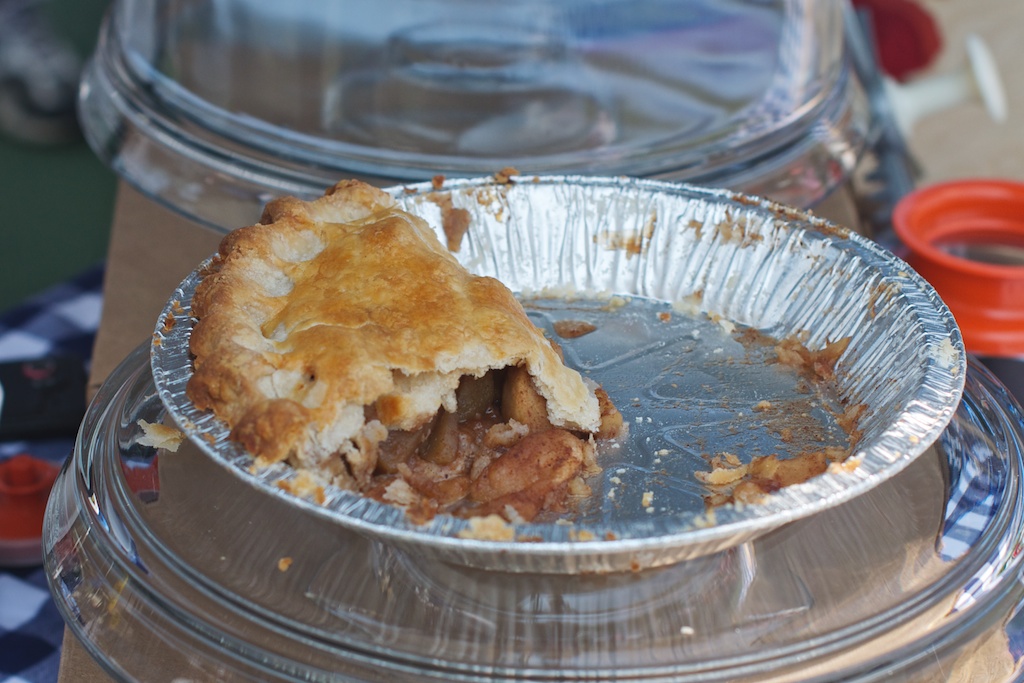 My small bite of pie and my equally short interaction with Rachel that day piqued my curiosity.  I could taste the care and attention she put into the pies.   I appreciated the lack of pretension in her flavors and seasoning.  One bite showed me that she understood the importance of letting the ingredients sing--and that she knew that there’s nothing wrong with simple.

These simple pies were why I traveled to Queens several weekends ago.  I wanted to learn the story behind the pies and witness the preparations that happen every Friday before a Saturday Brooklyn Flea.  Rachel and her boyfriend (sous-baker!) Erik Blair, a writer for The History Channel, were prepping for their third appearance at Saturday’s Fort Greene Flea.  Rachel frequently bakes during the 1am to 7:30 am time slot.  Luckily on the day I visited, she had snagged a more reasonable 5:30pm to 12:30 shift.  I stayed for several hours, watching the pies take shape and witnessing the challenges of cooking with massive industrial equipment that doesn’t always work as desired. 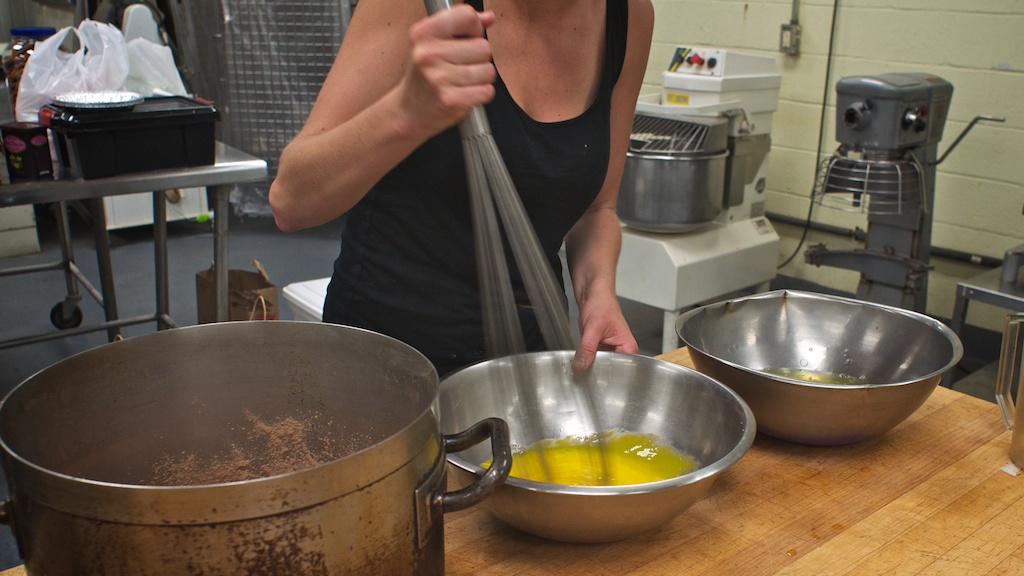 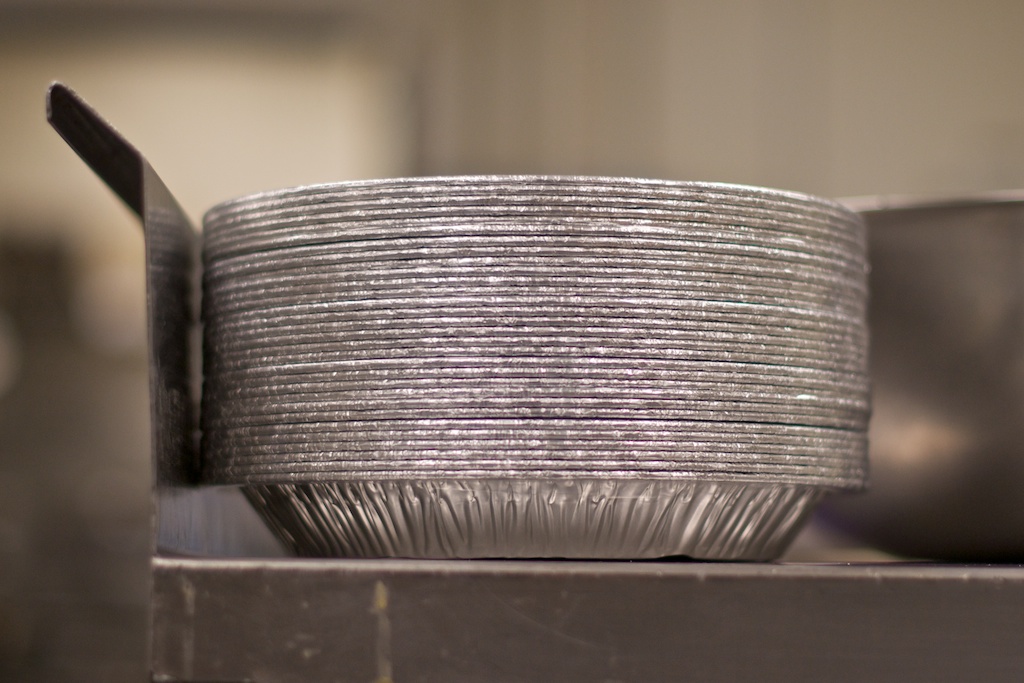 Despite long days at their respective jobs, Rachel and Erik were focused that Friday night.  Memorized recipes and months of test pies and repetition meant that they knew exactly what had to be started first (in this case, they melt the chocolate, so it can sit for 6 hours) and kept an order of operations in their heads.  Each worked methodically and with purpose--despite their exhaustion, I sensed little stress in their movements, simply focus.

Shortly after I left, Rachel was joined by two additional helpers:  her parents. 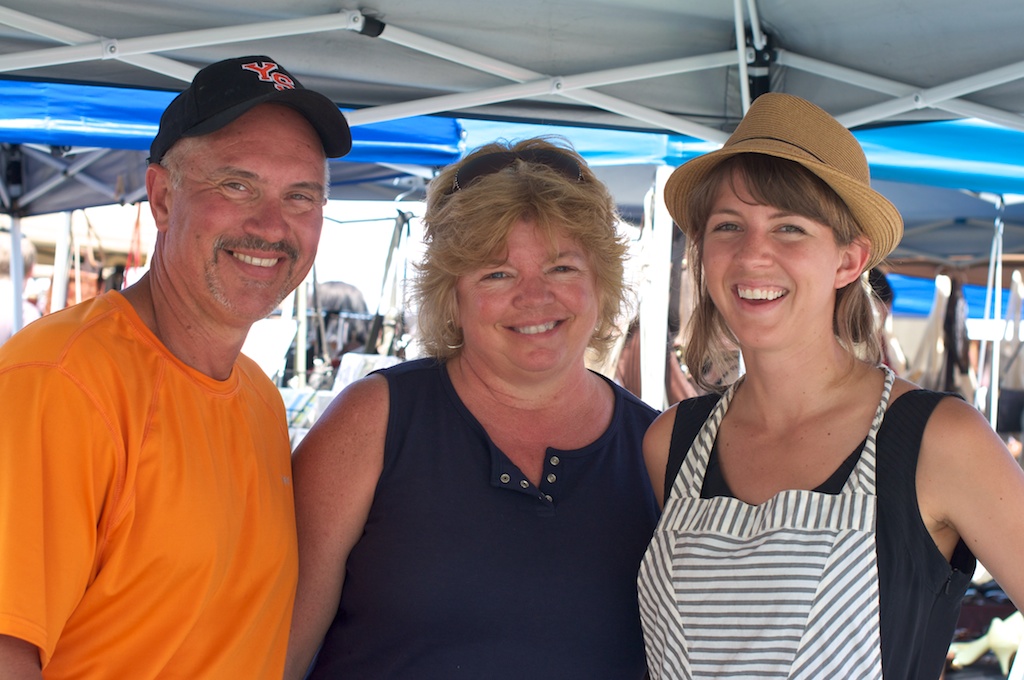 In some situations, this arrival would serve as a nice aside, an ‘oh how nice that her parents are helping’.  In this case, Rachel’s pie crust recipe is a family recipe.  Her grandmother taught her mother; Rachel’s mother taught her.  And equally important as the recipe, Rachel grew up on her parents’ Pennsylvania farm, forming a unique approach to and understanding of food:

We had this enormous garden filled with everything you could possibly imagine. We had a calf, 8 sheep at a time, chickens for fresh eggs, pheasants, turkeys.  All that stuff. We were really self-sufficient.  My dad just retired and has a pretty big garden going, so they still supply themselves, but they don’t have any animals or fresh eggs [they are looking into potentially owning a few chickens again].

My dad is from a farming family.  My grandmother had 11 brothers and sisters and all of them had a farm in the same area--so they’d grow different things and then go to their farms to help them.

A lot of time when I talk about how I grew up, it was my mom/dad/brother/me, but right next door was my mom’s brother and sister-in-law and their 3 kids. My dad’s mom lived (and still lives) on the farm too.  We didn’t have cable--we just ran through the corn fields and rode bikes.  I wouldn’t trade it for anything--though I think I missed out on some 80s pop culture.

Rachel graduated from college with a printmaking degree.  After college, she worked as a studio director at Dieu Donne, where she collaborated with artists in handmade paper. Since 2007, she’s worked as the Associate Director of Pace Prints in Chelsea.

She sees many similarities between paper making and pie making.  Just like with pie, there are paper recipes for different kinds of pulp. There’s the waiting process:  after you press the paper, you wait 2 days for it to dry, which is similar to sticking a pie in the oven (though luckily we don’t have to wait 2 days for a pie to be ready!). 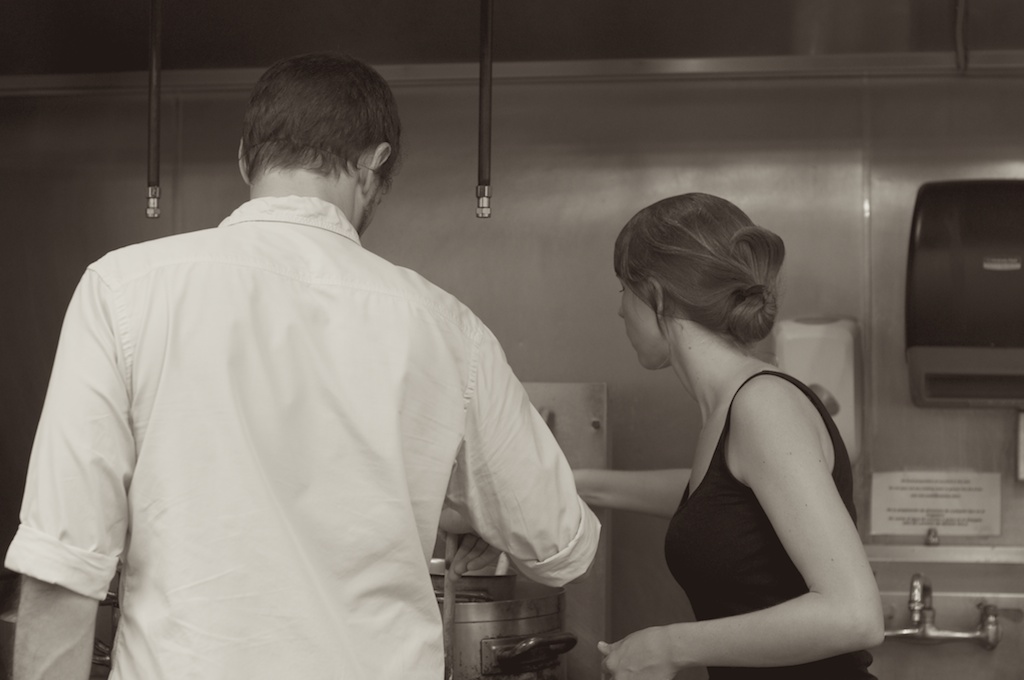 When Rachel became the Associate Director of Pace Prints, she began to miss the creative process.  She shared, “I missed creating stuff with my hands, so I turned to baking. I needed something tangible to see that I could still make something.”

The transition from making pies at home as a cathartic outlet to making them at the Flea was gradual and not exactly something on which Rachel had planned.

I don’t know if there was a moment where I thought ‘oh the Flea is where I want to be’. It was something I was doing all the time, taking them to everyone, and then my friend finally said ‘I can’t get enough of your apple pie--can you please sell these or give me one a week?’

And I thought you know what, why don’t I try this little venture and see.  My parents own a farm and have 250 pumpkins [each Fall], so I [decided] to bake those.  That was something I did out of my apartment--I did 25 pies that went out to friends.  Everyone was excited and supportive.  After that I got ‘Oh are you going to make these for Christmas?’.  So I did that.  Then in February, I thought I wonder what I can do next.  I didn’t want to just keep hitting people up for holiday orders and was wondering where I could market this.  I thought about the Flea and it seemed great.  I checked it out a couple times and talked to other vendors who had all had amazing experiences.  They [Flea founders, Jonathan Butler and Eric Demby] take care of the people that sell there.

After spending some time with Rachel and Erik in the industrial kitchen that Friday, I visited Rachel’s tent at the Flea the next day--this time leaving room for a slice of chilled chocolate cream pie.  After I met her friendly parents, Rachel reported that they had been in the kitchen until 12:30--and she excitedly shared that she got a whole 3 hours of sleep before returning to the kitchen to pick up her pies. 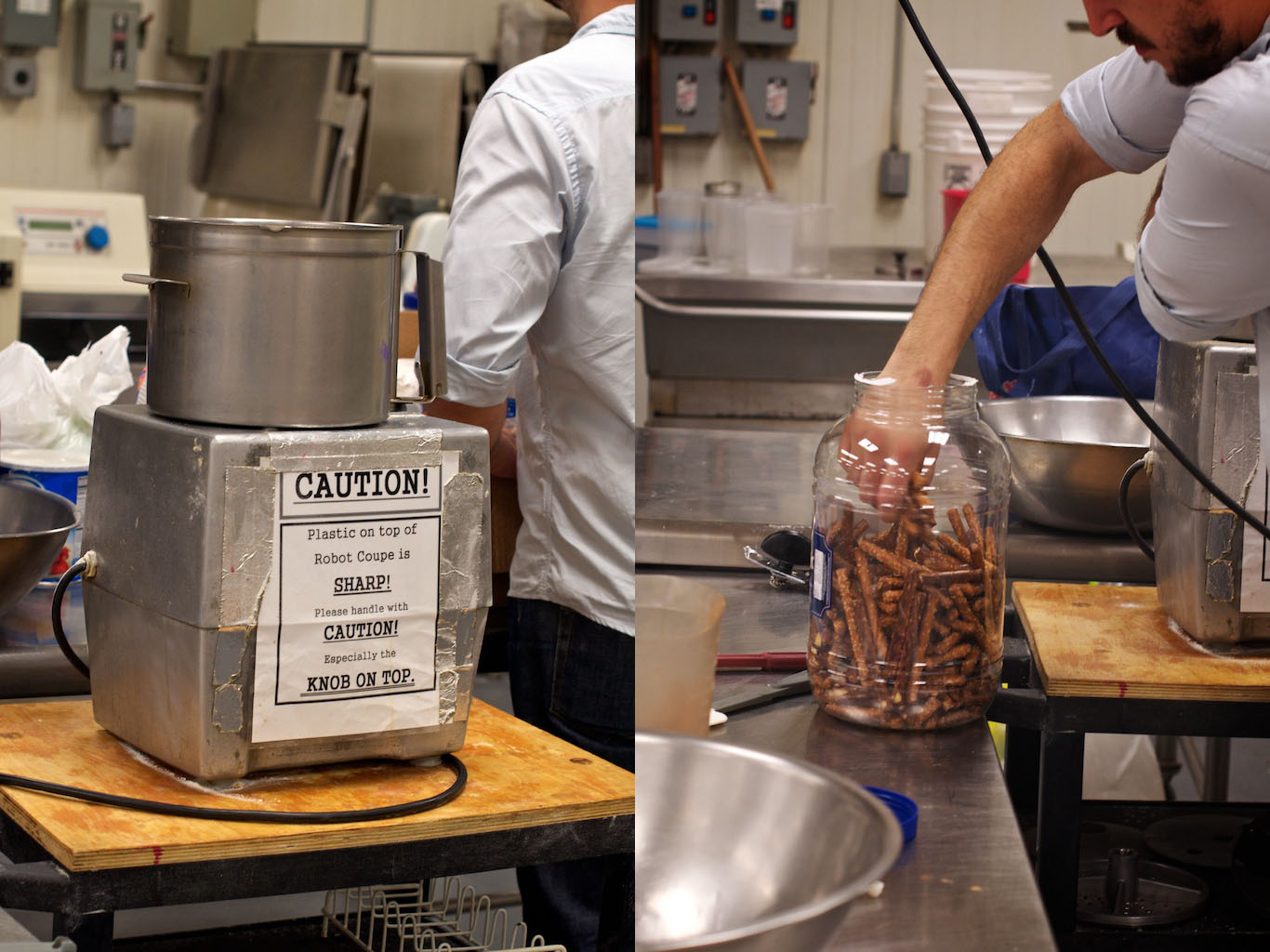 The Flea organizers want all the vendors set up by 9:30, so Rachel and Erik arrive at the Flea by 8:30.  Sleep or no sleep, the scene during set up time is full of adrenaline and excitement, a feeling that they share with many other Flea vendors as they caffeinate at Crop to Cup and set up their tables for the day.

Rachel sold out of pies that Memorial Day Saturday (and every Saturday since).

Click through to read about Rachel’s plans for the future, what kind of pies she’ll be making this summer, and her favorite Brooklyn restaurants!  And the next time you’re at the Flea, visit her table for a piece of pie.  If you’re too full, you can try a sample and plan accordingly next time.

Q: How far in advance do you think about your business?  Are you just thinking about this summer or do you have longer term thoughts?

Rachel: Thus far, I’ve never had a business.  It’s a big learning experience.  I’ve always been on the production end.  I’ve never run budgets for my own product.  You get very emotionally connected to your product--it’s good when you make something you like yourself!  Let me get through the summer and see where I am. Renting a commercial kitchen is cheap for what it is, but it’s still expensive.

I’m committed to the Fort Greene [market].  I like building up the customer base--it’s like having a store front.  We’ve gotten a lot of specialty orders--mini pie favors for a wedding. I’m doing some pie orders for some weddings this summer.

A client wants small mini banana cream or key lime pies, so I did mini tests for them.  I’ve also gotten cupcake orders.  I do like baking all sorts of things--but pies are a wonderful thing I’ve inherited from my grandmother and mom. There’s a lot of history there.

Where I hope to be at the end of the summer is to have built up a client base, people who love pie!  I'm now getting customers who are coming back and contacting me [with requests like] I’d like to order a pie for Father’s Day.  I can start taking advance orders and making lists.   And also [continuing] making pies just for the Flea.

If we’re talking long road, I’d love to have a little shop.  Coffee, pies.  I’d work with somebody that can make awesome sandwiches and I’d curate a space--bring some of the art element into it.  Have a nice community space. That’s down the road...when the new hip place is Bensonhurst. 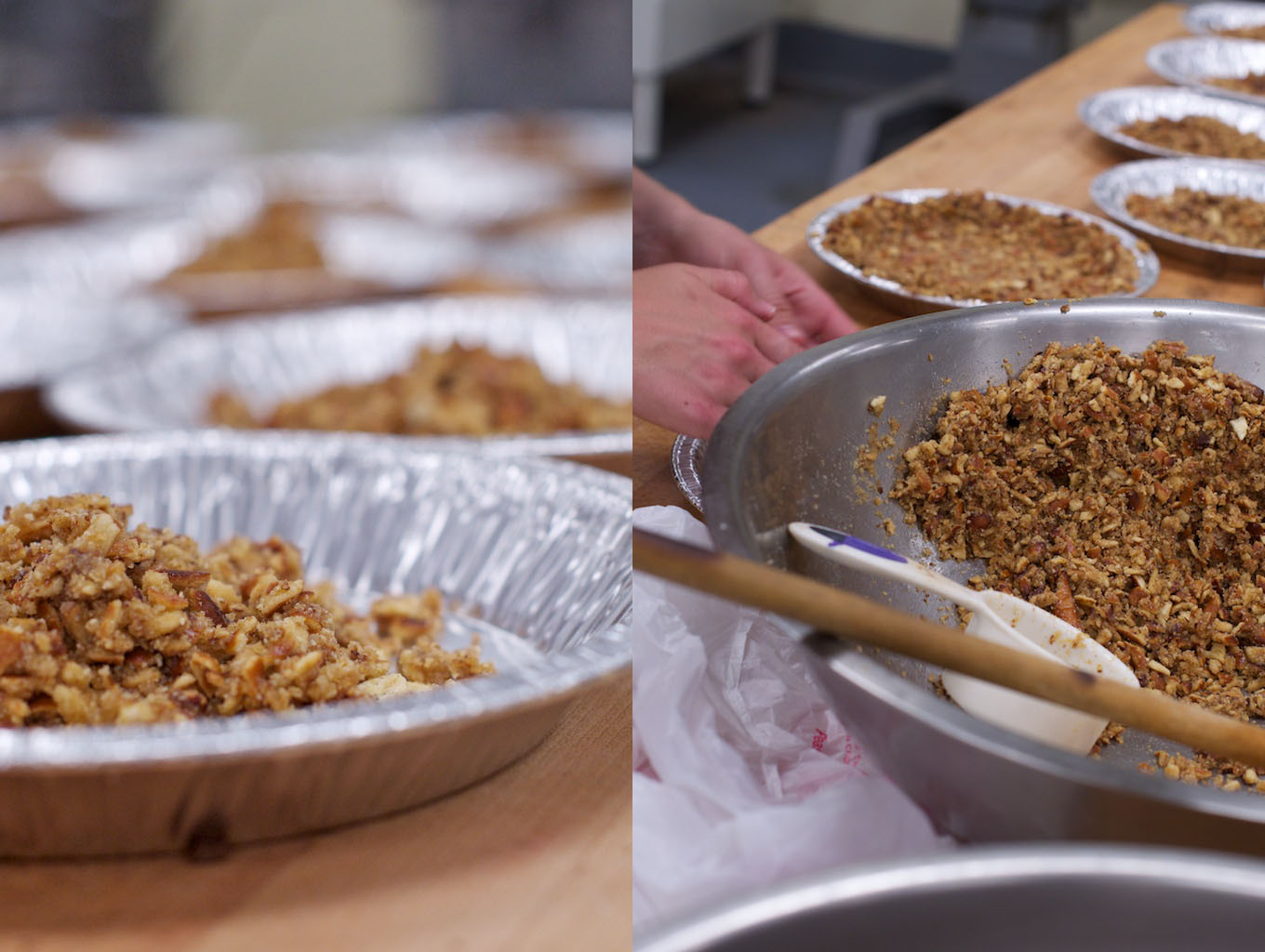 Q: What’s your relationship to food?

Rachel: I’m always running from the gallery to pick up baking ingredients, Tuesday-Thursday. Though, I have cooked every night this week.

My parents really taught me to be appreciative in terms of animals.  We slaughtered our own chickens; I eventually (interesting story) knew what was happening with the cattle.  They taught me to treat things with a lot of respect, with this underlying belief that humans are intended to eat animals.  However, earlier this year, I saw Food Inc and was like I can’t deal with this.  Even if it’s organic, it’s a little tough to know the conditions it grew up in.  That said, on occasion I’ll hit up a street cart.  I think I lasted 4 months as a vegetarian.  I’m in tune with what my body wants.  I’m also a runner--though lately not so much--when I’m doing that, I need protein all the time.  I have a huge sweet tooth; I’ve learned that’s okay, in moderation. 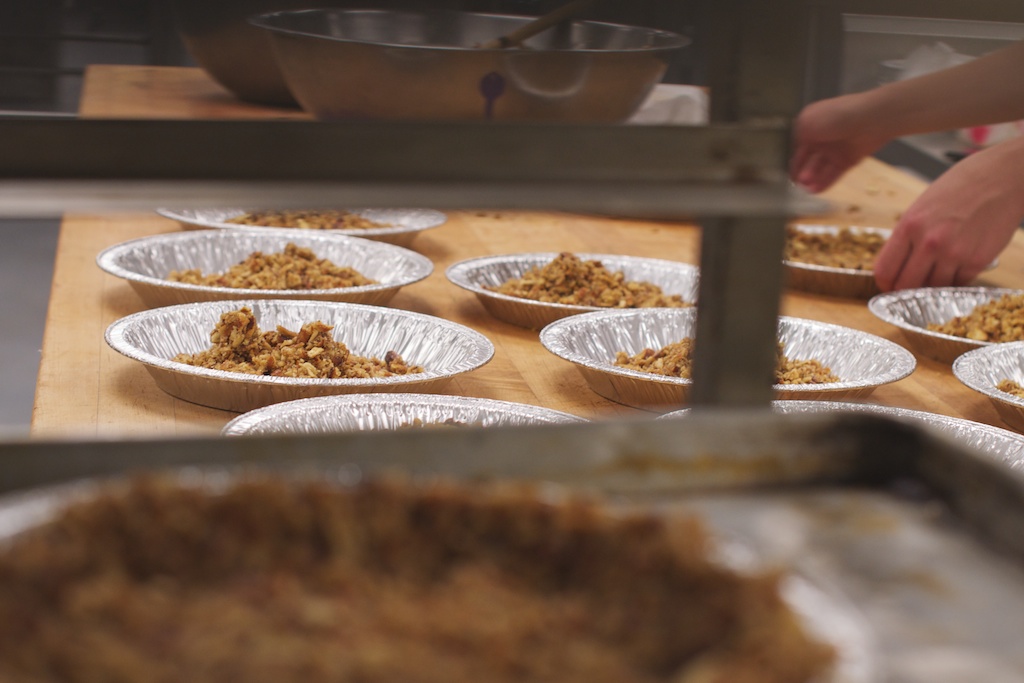 Q: Do you have a favorite restaurant?

Rachel: I’ve been a long time Frankies fan, and now that there’s that little mecca over there [in Carroll Gardens].  Buttermilk Channel is incredible.  Going there for brunch is the biggest treat in the world.  Up this way [in Park Slope],  Applewood.  I’m a big breakfast fan.  Frankies is great, especially in the fall when they have a fire going.

Q: What kind of pies are coming up at the Flea?

Rachel: Strawberry pie.  I let the strawberries speak for themselves.  It’s so fun going to the farmers market, getting the supplies, telling them what you do.

Key lime.  I have been experimenting, getting ready for blueberry season--lemon, a little cardamom,  Nothing overwhelming, I like to let the fruit do its thing.  Peaches will be coming up soon; blackberry/raspberry pies.  Basic country style. 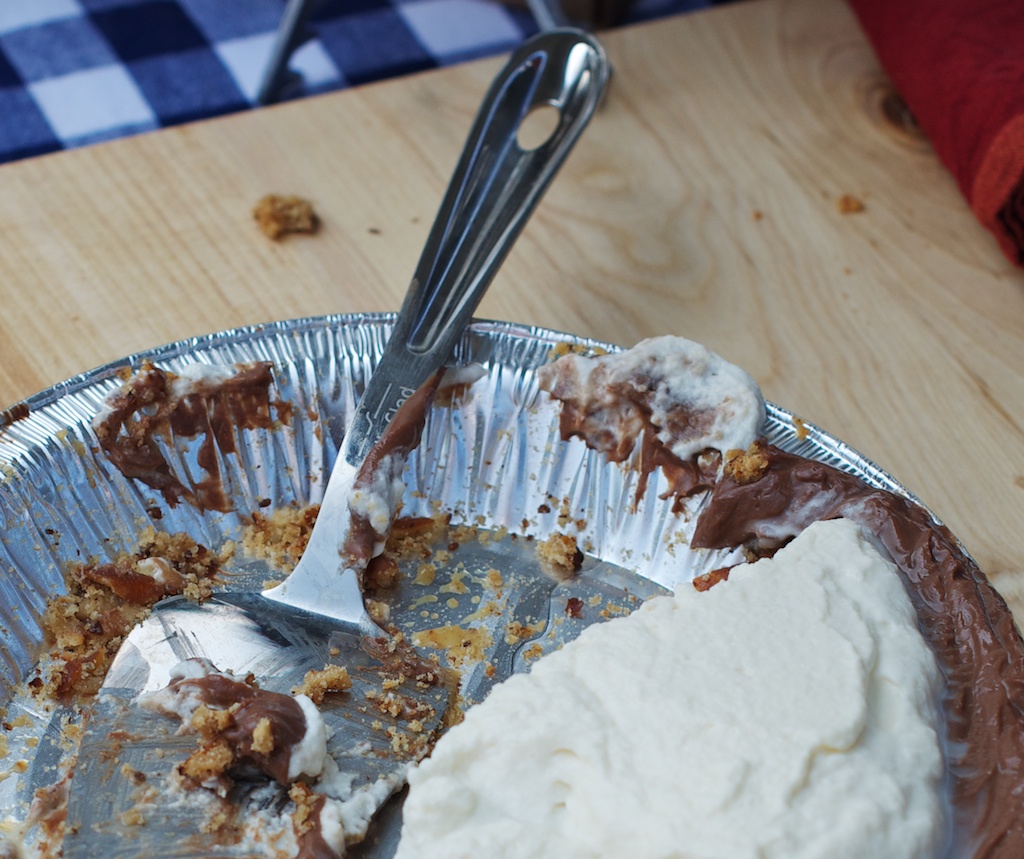