It was more than open land that I suddenly craved; I wanted to interact with more of nature’s elements than just water. I wanted to get my hands in the earth. 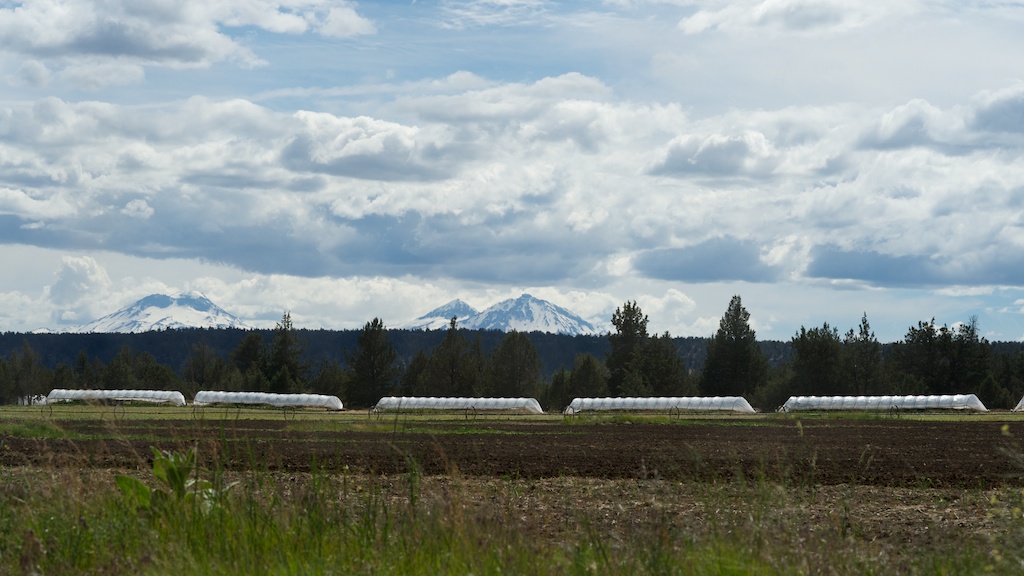 Literature is full of characters putting aside their own goals and desires to aid their families, sacrificing their passions for the betterment of the family business. Such stories consistently drive compelling narratives ripe with doubt, heartache, and misplaced anger. A lazy writer might rely on such genre tropes when viewing the life of Sarahlee Lawrence. Lawrence spent years as a river guide, only to find herself, three years ago, as a full-time farmer on her family’s land in the high desert of Oregon. For much of her twenties, Lawrence guided groups of people through challenging, and even treacherous, expanses of some of the world’s greatest bodies of water. And now, because she’s a landlocked farmer in the desert, one might naturally see her move as a selfless sacrifice. Yet this is where literature and reality diverge: while the written word plays a role in her story, Lawrence’s path back to her family’s farm in Terrebonne is a natural fit for this 31 year old. 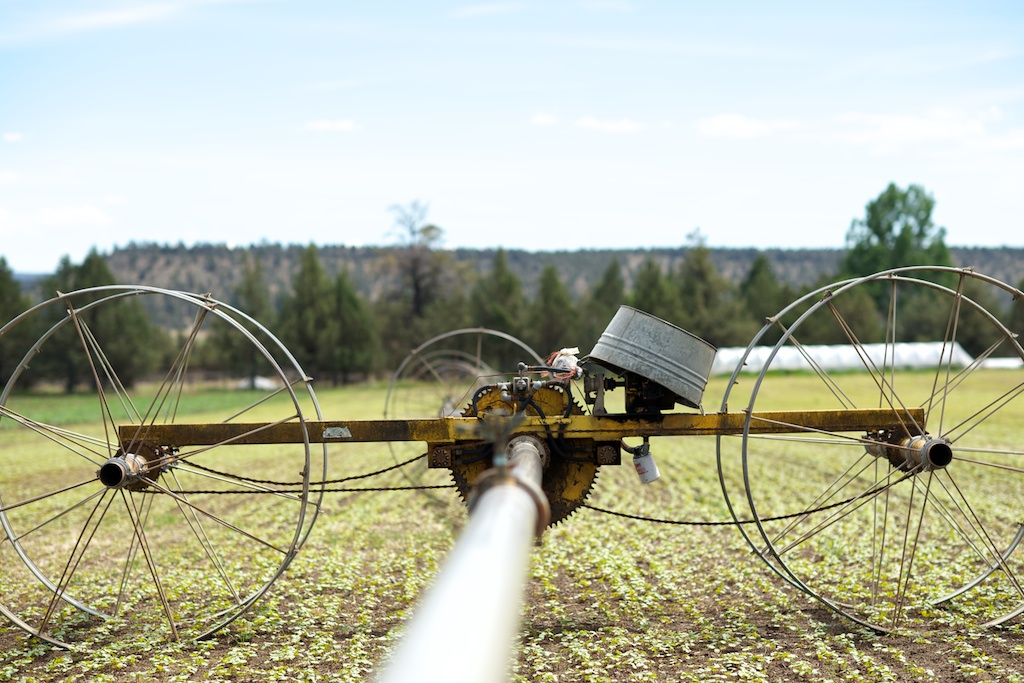 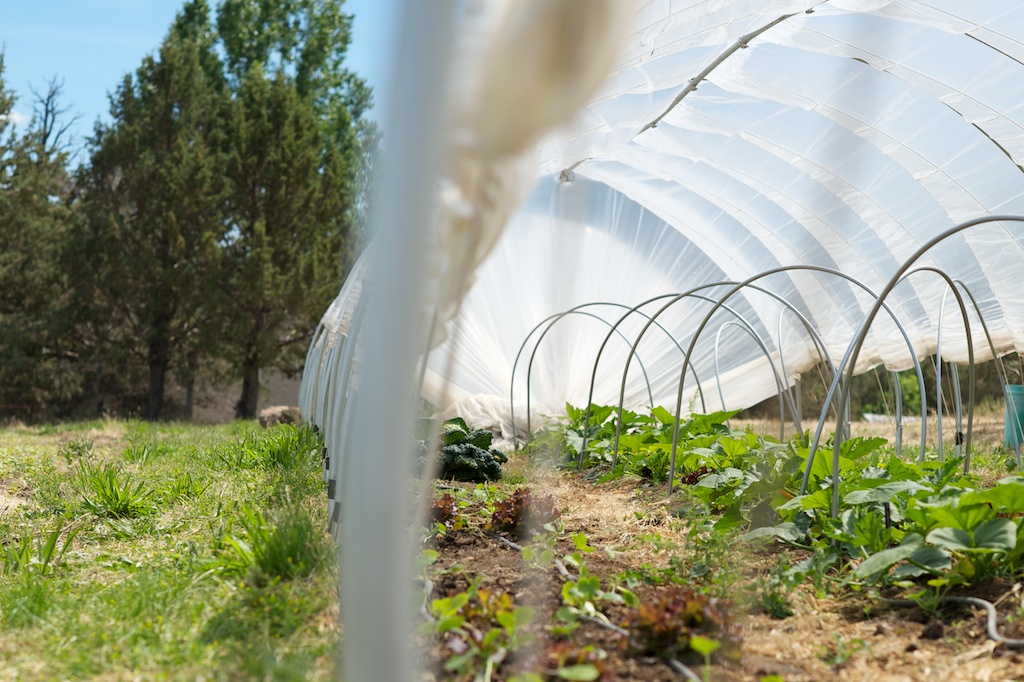 Sarahlee Lawrence grew up in Terrebonne on the very acreage where she now farms with her parents and fiancee, Ashanti Samuels, as Rainshadow Organics. For the past three years, Lawrence has methodically transformed part of her family’s 160 acres into a diversified organic vegetable and animal farm that now grows food for 80 CSA members, three farmers’ markets, and multiple restaurant accounts. Growing up, Lawrence assumed that the farm would be an important part of her life, but she never envisioned herself as a full time farmer; when imagining her adult life, she thought that she’d “live at the farm and come and go, not farm-farm”. In between stints of life on the river, exploring undeveloped sections of the world and navigating miles of powerful rivers in Colombia, Peru, and closer to home in California and Colorado, she’d return to the land to help with irrigation, or to plant cover crops to improve the soil.

As she recounts in her memoir, Lawrence began to pull away from her life as a river guide while in Peru, writing that “in [an] apartment in Peru between river trips, I felt homeless, and I was beginning to realize that I couldn’t build a home on writhing whitewater.” Before officially staring Rainshadow Organics in 2010, Lawrence began to spend more time in Terrebonne during her river guiding breaks, building a log house, adding infrastructure like greenhouses and irrigation, and cover cropping for two full seasons. While her father no longer wanted to farm full-time, Lawrence had realized that she did. Though Lawrence had zero farming experience, she knew how to work hard, and that year, she grew enough food for a 30 person CSA. “The people who supported the farm in the first year were angels”, Lawrence chuckles. “I didn’t know a pumpkin was green before it turned orange; I didn’t know what bolting lettuce was.” 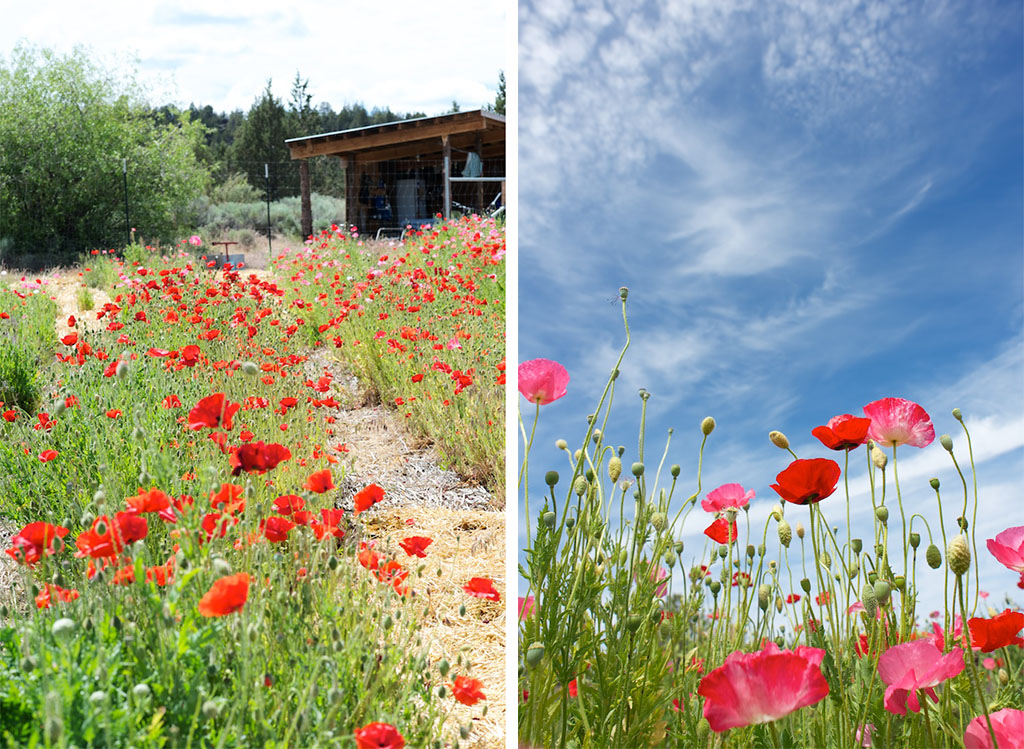 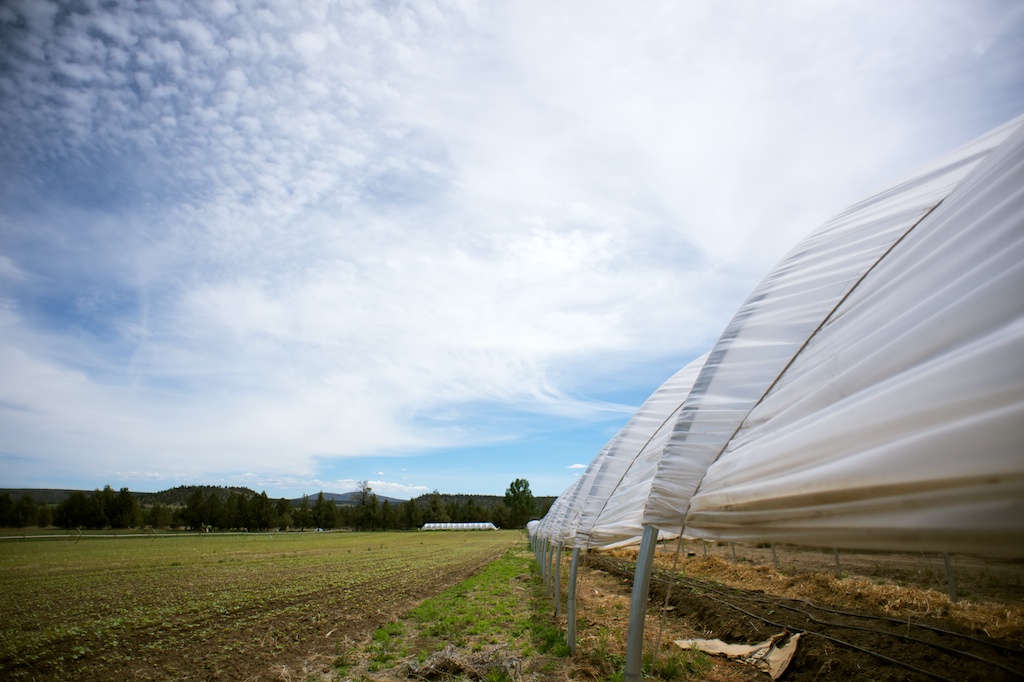 The drive to Rainshadow Farm left me feeling as close I’ll ever come to embodying that carefree driver in a car commercial. You know the kind: the driver is navigating gorgeous terrain without another car in sight, and suddenly, even if you despise driving, nothing seems more appealing. As soon as I turned off US-97 – the main road between Mt. Hood and Bend that alternates between clusters of fast food restaurants, livestock exchanges, motels, stark desert, and sheer rock-faces – I quickly left the tractor trailers and Smith Rock day trippers behind. Within five minutes, I was the only car on the road, driving around never ending curves, deeper and deeper into the high dessert. I used the Three Sisters Mountain Range as my compass, because I knew that when they were to my left, I’d be close to the farm. 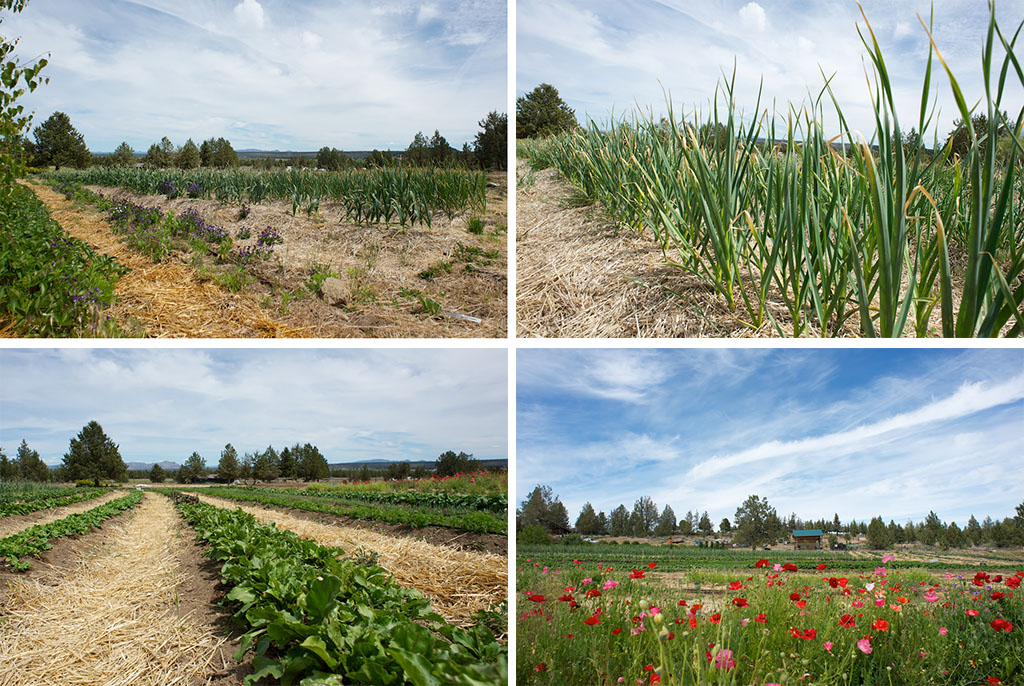 Lawrence met me at the potato cellar. When she returned home five years ago, she jacked up the decrepit cellar to pour a new foundation. Along with storing potatoes, the cellar is used for long table farm dinners, complete with a rustic chandelier. This is Rainshadow’s first year growing an extended crop of potatoes: they’ve planted 10 acres of 25 different varieties, and are hoping they’ll have about 100 tons to harvest. The potato plants stretch as far as I can see in either direction, and Lawrence is still learning how to navigate the 1200 foot beds, admitting that they feel endless; “a crop with a single need”, she says, “is totally different from farming 50 different kinds of vegetables on 10 acres.”

Lawrence started Rainshadow on two acres of land, and over the past few years, the farm has expanded to an additional one hundred acres that encompass an extensive network of vegetables, flowers, buckwheat, greenhouses, pigs, and chickens. Rainshadow also raises beef cattle on the neighboring ranch. This growth is a trend for the future: she plans to add two more rows of greenhouse, to build another tomato house twice as big as the current two houses, and to expand their flock of 400 broiler chickens to 1,000. 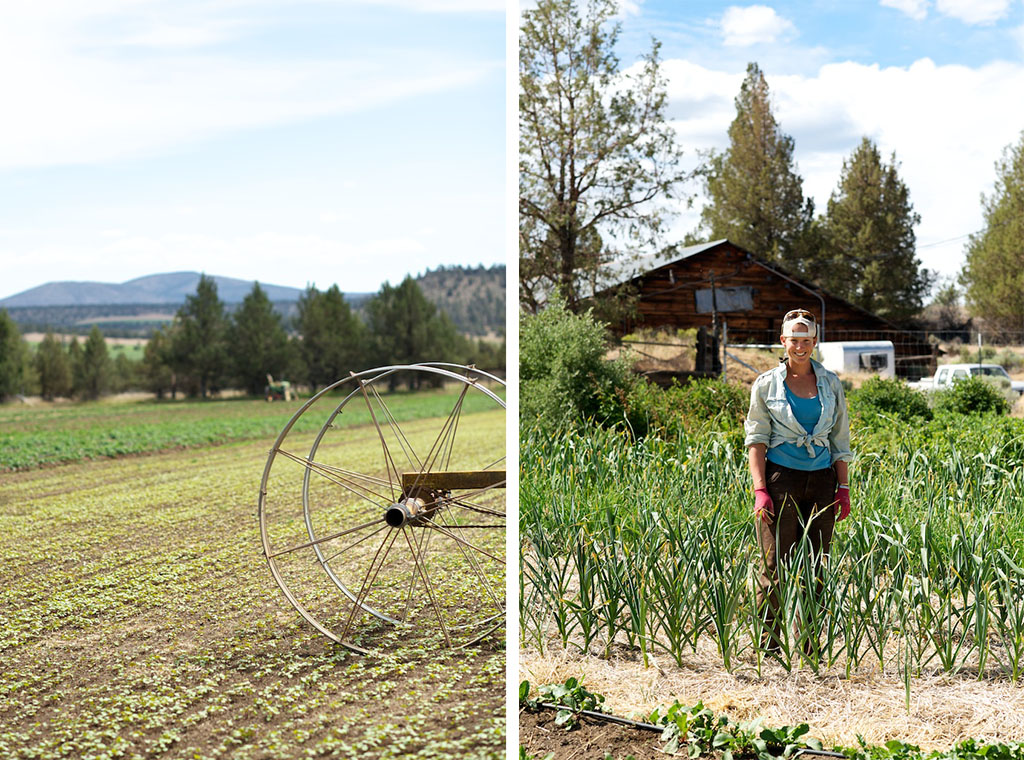 Although she’s traded splash pants for Carhartt dungarees, Lawrence has retained her river guide demeanor in how she runs Rainshadow. A successful river guide has to toe the line between focused and flexible, leader and team member. She must be able to tell the difference between a routine or serious scenario, and though she might be viewed as a friend or as a strict leader, her most important job is keeping her charges safe.

Lawrence is straightforward, not one to mince words or embellish. When I first arrived, she wanted to make sure I had my recorder turned on because “she didn’t want to repeat anything”. Her years of tour guiding were apparent in how she showed me around the farm. While some farmers I’ve met will wax philosophically about nature and society, Lawrence answered most of my questions succinctly, preferring to speak directly without meandering through a story. She wanted to know what my specific questions were, and as we walked around the farm, she pointed to crops, telling me what they were, citing numbers and types quickly off the top of her head.

Our structured conversation provided a window into Lawrence’s competence as a riverguide. A river guide must plan and move the raft in the appropriate direction, simultaneously anticipating issues, either human or natural. As Lawrence guided our conversation along, she easily remembered what we had been talking about and steered it back if it ever veered off track. Ever the guide, she was very straightforward about the sections of the farm I could explore and what I might want to take pictures of. 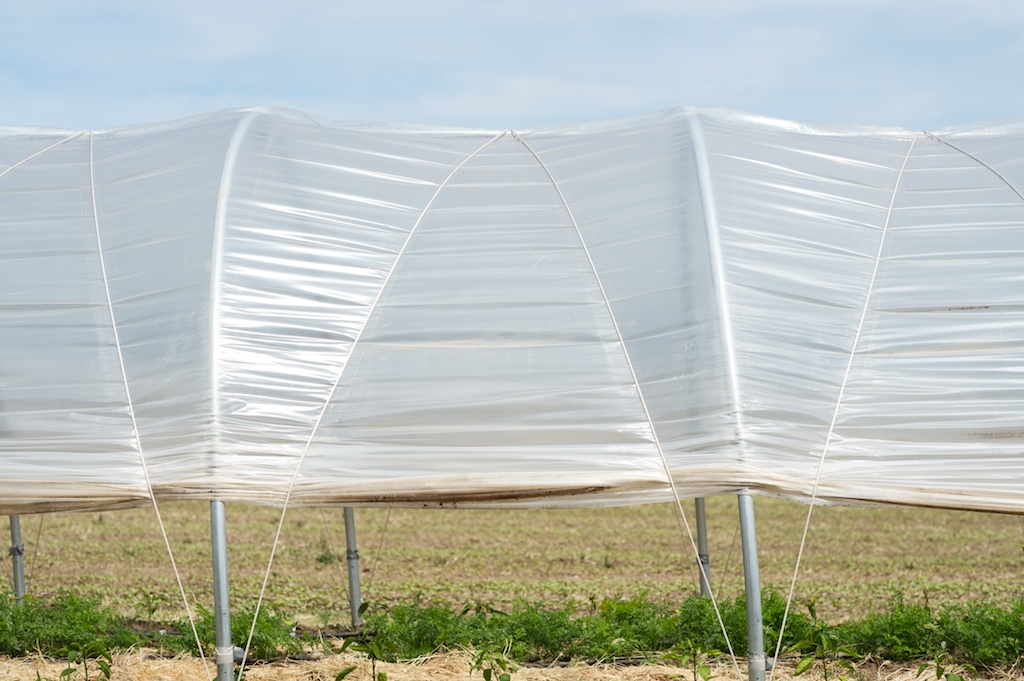 A training manual for river guides shares that “at first, you will likely view the river as a force to be overcome. You’ll battle the many rocks that seem to come from nowhere to mess up your perfect plan. With time and experience though, you’ll view the river as an ally.” Unpredictability and the humbling reach of nature effect seasoned and new farmers alike: hail can shred healthy crops in seconds; an unexpected frost can ruin promising budding fruit. Michael Pollan has written that gardening means letting go and adapting to nature instead of trying to force things in a specific direction, and farmers must apply Pollan’s concept on a much larger scale. Lawrence’s experience with intuitive guiding and flexible planning symbiotically fit into her newer life as a farmer. She shared that she has multiple maps and a planting chart, but high dessert weather isn’t always predictable. Though I visited on an exceptionally hot day, it had frozen that same week, endangering the newly planted buckwheat.

To succeed as a farmer or as a river guide, you must use nature to your advantage. When navigating around a river bend, guides will keep the raft close to the fastest water, but not all the way in. Lawrence uses her vast expanse of land and the incredibly hot summer sun to her advantage. She’s built greenhouses situated above the buckwheat and potato fields; they’re designed to capture the sun and keep the area warm through nighttime frosts and even winter temperatures. Rainshadow grows food year-round in the greenhouses, harvesting greens, carrots, parsnips, and cabbage in the winter months. The farm also starts plants and chicks in their four-season greenhouse, a structure that uses passive solar energy and features a wall of water on the back that absorbs heat and then disperses it as the water cools. 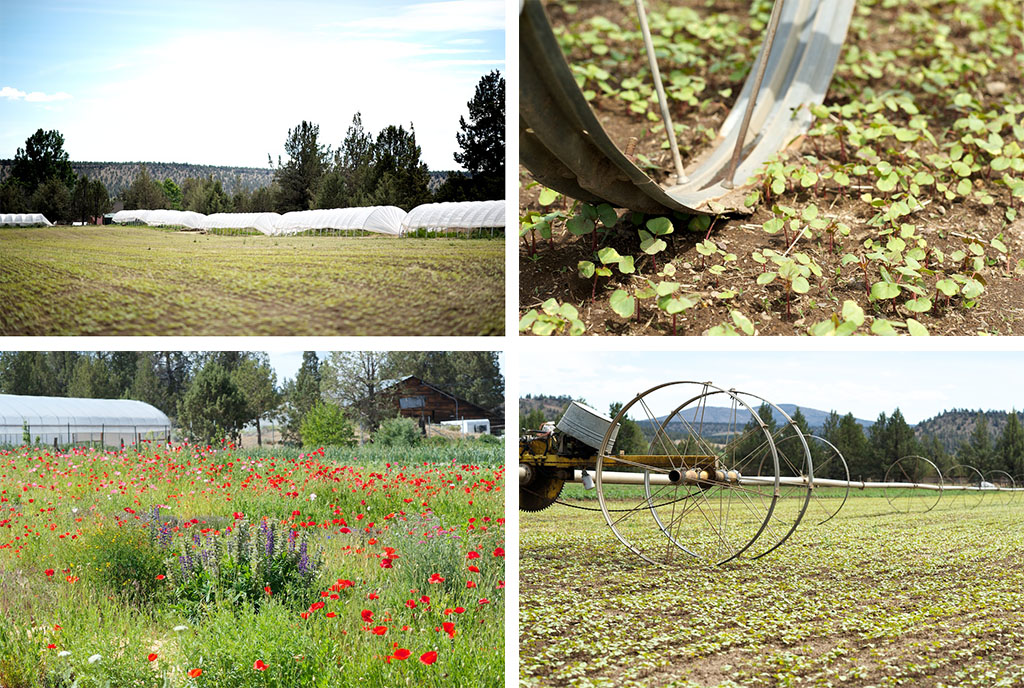 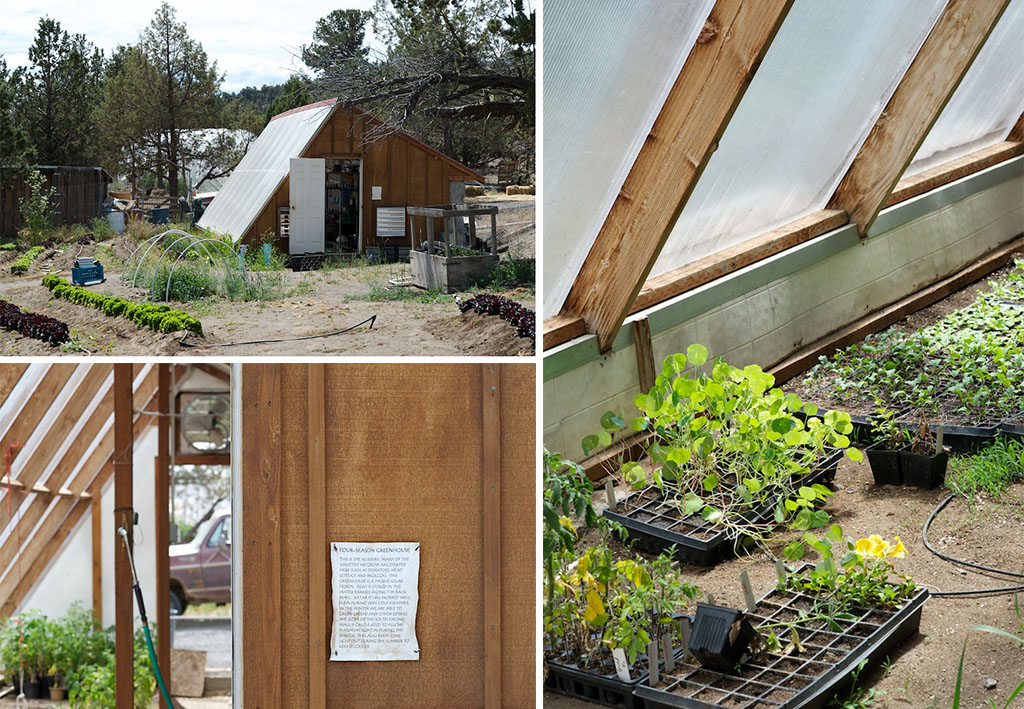 While Lawrence still makes a point to guide expeditions along the Colorado River through the Grand Canyon each July, the role of water in her life has mostly shifted from navigation to irrigation. Lawrence studied environmental education and water conservation at the University of Montana, and has a firm grasp on how to efficiently use water at Rainshadow. She returned to the farm with a desire to be a steward of the land and to grow food as sustainably as possible. Nine years ago, the Three Sisters Irrigation District, of which Rainshadow is a part, received a grant to pipeline the entire area. All of the farmers in the district, including Lawrence and her family, lay 128 miles of polyethylene pipe. And now, because the water is under pressure, Lawrence reports that they save 70% of the water that had been lost to evaporation and seepage, citing this project as the “perfect form of community-based collaborative water conservation”. 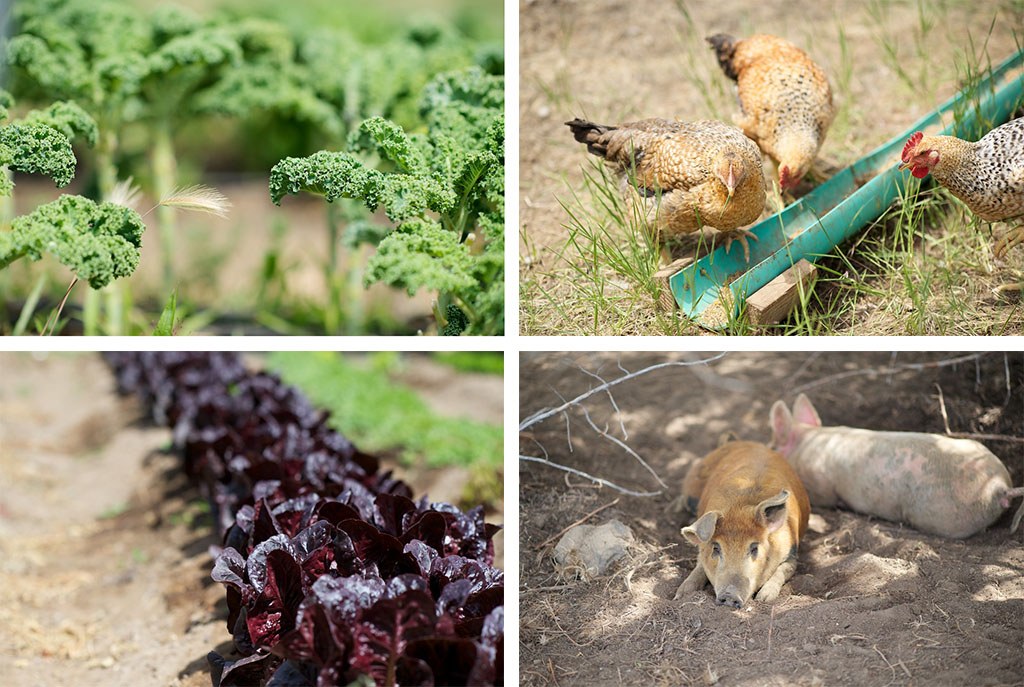 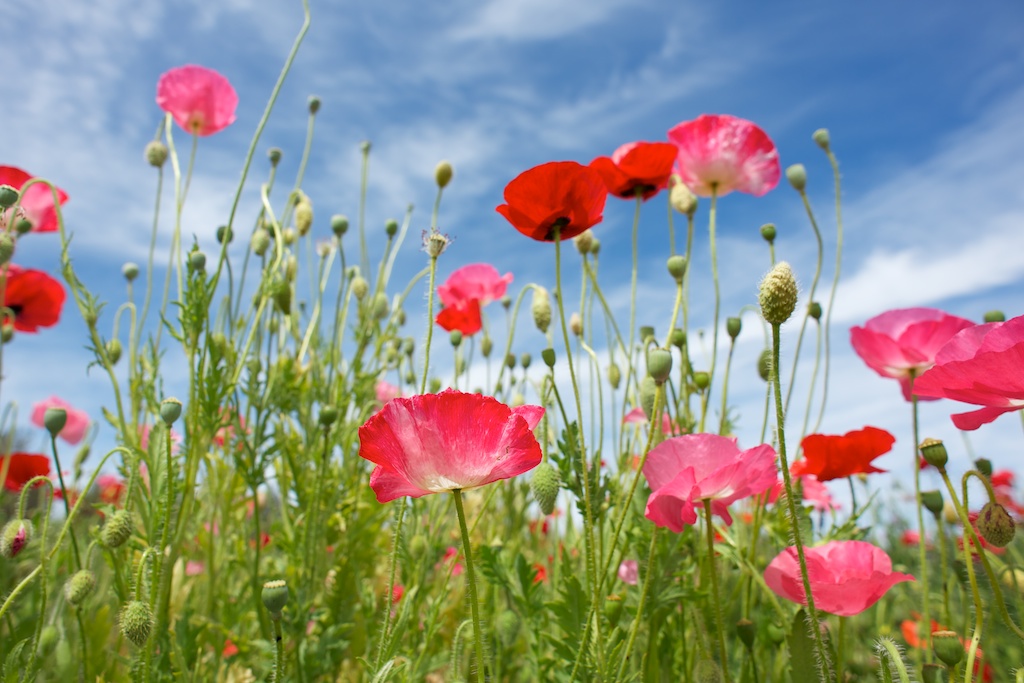 Shortly before I left Rainshadow, a friend of Lawrence’s drove up with a pickup truck full of folding chairs for a CSA potluck and bee celebration that Rainshadow was hosting the next day. Lawrence’s eyes lit up when she saw her friend, and as they unloaded the chairs, I overheard that he was going with Lawrence on an upcoming Grand Canyon river trip. Lawrence excitedly talked about getting back on the water and the various people they would meet (and guide) on the trip. As I witnessed the conversation and sensed Lawrence’s excitement, it was easy to glean that the river is as intrinsic to Lawrence as it was years ago, but her relationship with it has changed. 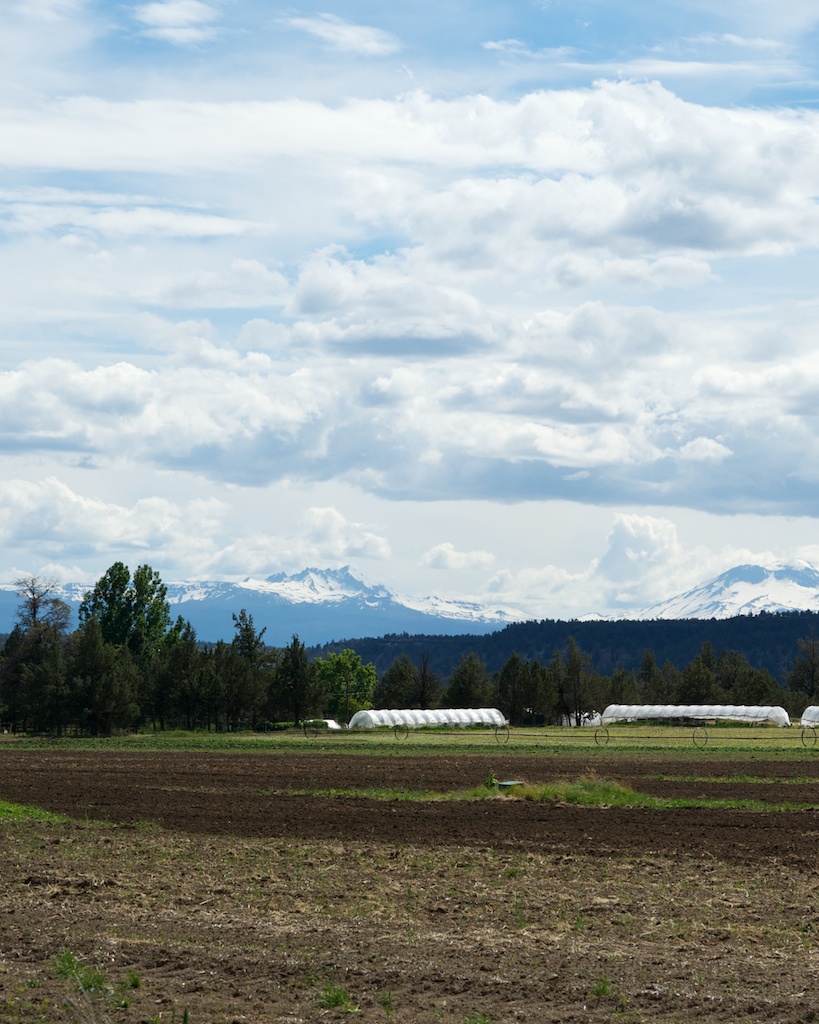 Lawrence writes that walking away from the river was like “leaving a lover” and that embracing her family’s land was a “deeper love, like that of a grandmother”. In returning to farm, she was searching for something to sustain her, something more than a fun fling. At Rainshadow Organics, Lawrence now directs her passion and tenacity to the all-encompassing world of farming, understanding that this relationship with the land is less likely to flame out. And yet, the river is always there, allowing Lawrence a chance to re-experience the life she once pursued, before returning to the home she’s built at Rainshadow Organics. 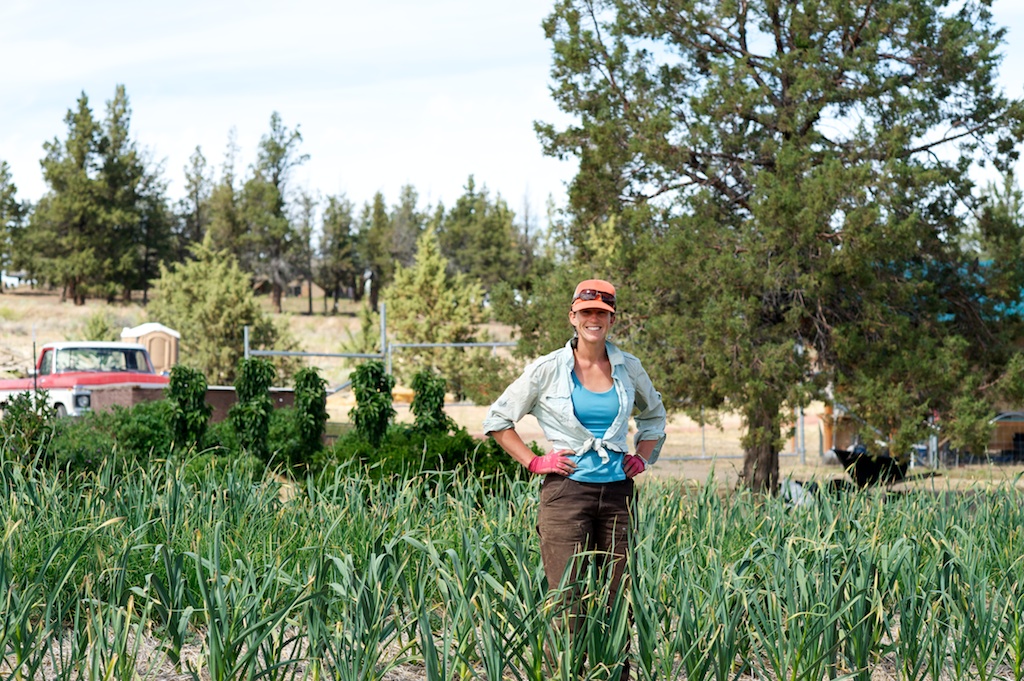 Find detailed information on what’s grown, where to pick up your food, and the multiple options for membership HERE.

Rainshadow just started a Portland drop-off for their Meat CSA. The pick-up is the last Monday of the month in the Besaw’s parking lot. You can choose between a 10 lb or 20 lb option and the CSA includes pastured pork, chicken, and beef. Scroll to the bottom of THIS page to learn more and sign up.