After reading about the dedication and heart the Blews put in each day at Oak Grove Plantation, you’re probably wondering more about their products. What do they even grow?

Oak Grove’s operation consists of many pieces working harmoniously. One part of the farm consists of Oak Grove Mills, the grain operation.  Using the farms wheat and corn, the Mills make corn meal, many kinds of flour, bran, and popcorn.  Then there’s the hog operation, High Hope Hogs.  The pigs are a certified disease free herd, raised without hormones or growth steroids.  It should be noted that the pig operation is confined. I was only able to see the barn where the pigs are housed, not the actual pigs. The pigs are processed at a family butcher.  Processing results in hams, steaks, roasts, and sausage. 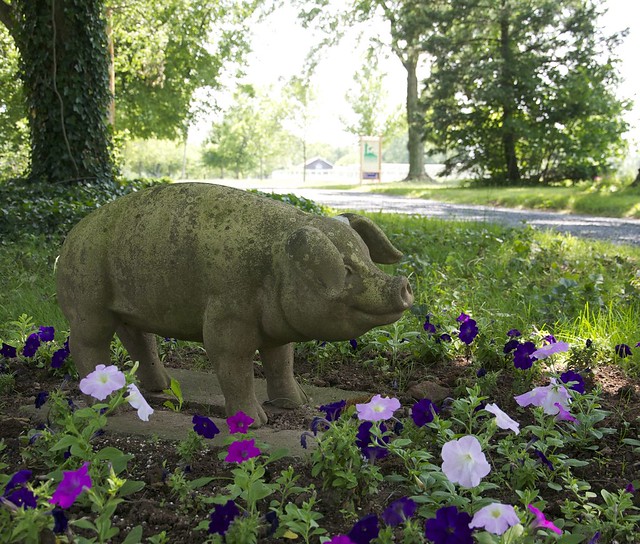 The Blews also sell baked goods, especially in the winter when other products are in their off season.  Using their grain, flour, fruits, and vegetables, they bake at a commercial bakery once a week:  apple pies, pumpkin pies, muffins, cookies, brownies, bread.  The apple pie—Susan’s apple pie—comes from Susan’s grandmother and mother, a true family tradition.  The pumpkin pie—Bette’s pumpkin pie—is named after a woman who worked with the Blews when she was in her 70s.  Bette would take extra pumpkin and squash and make thirty pies at a time in her kitchen.

The remaining part of the farm is dedicated to the vegetables, fruit, and plants.  There are two greenhouses, an expansive field for vegetables, and an orchard.  The Blews farm with organic practices (read below to learn more about why the farm is not currently certified organic).  Vegetables grown include eggplant, squash, pumpkins, and tomatoes.  They grow 71 varieties of herbs including, basil, rosemary, sorrel, and thyme.   Fruits include peaches, melons, and apples.  For a longer list, please visit Oak Grove’s profile. 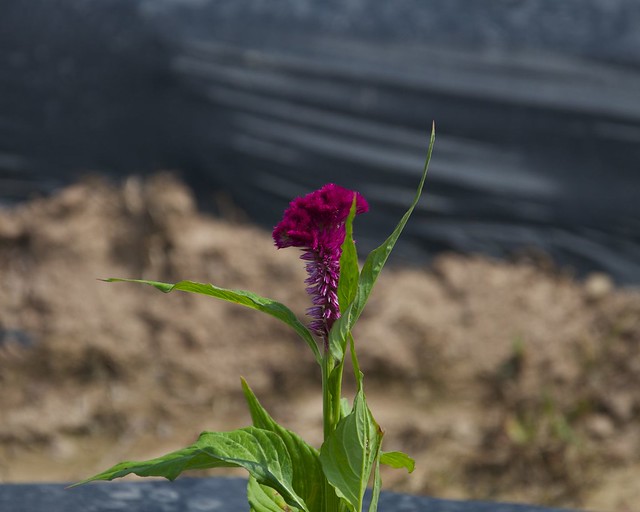 Each Oak Grove product has an accompanying story about why its grown, why the Blews picked that variety, and an in-depth knowledge of that product.  Some products were grown intentionally; others were grown after discovering that there was a customer base for them.  The Blews didn’t think they were going to sell sunflowers, but after selling out on the first day, they now grow about 20 varieties. (Did you know that if you ever see sunflowers growing anywhere, wherever they face is due east!) 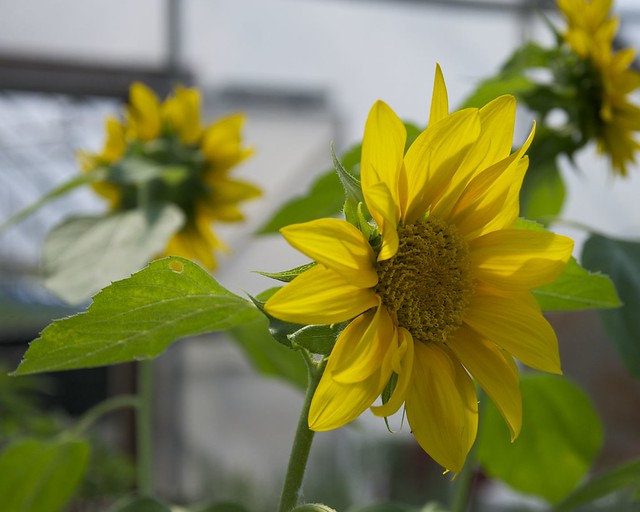 Oak Grove Plantation has a loyal customer base.  Ted shared with me the uproar that was created when Oak Grove was recently asked to leave the McCarren Park/Greenpoint Greenmarket.  Along with Union Square, Oak Grove had asked for another market to go to.  Greenmarket responded by granting them a market that starts on July 10th (Staten Island Mall).  Ted asked if they could also have something a little sooner.  Ted and his main worker, Vinny, went the first day and Ted shared that the customers were thrilled with their products:

We went there for four markets.  On the last market in April, the manager calls me up and says ‘this is your last Saturday’.  I said, ‘Jessica why?’  ‘Well, someone else at this market sells herbs and they’ve been there for years.  You’re the last one in so you’re the first one out.

So, the last Saturday in April, we put up a poster to let people know.  [The poster said] we are moving May 1st St Georges; July 10 Staten Island Mall; thank you for your patronage.  People would come up and say why? You can’t move! Vinny would say, ‘we don’t have any choice.’  [Finally] Vinny said ‘go see the manager’.  At one point 72 people were standing in line at the manager’s station.

For even more information about Oak Grove and the Blews, read some of the questions and answers below.

Q: Do you do any sourcing to restaurants in NYC?

T.B.: Oh we have a lot of restaurants that come buy from us directly.  [It’s not] usually a pre-arranged deal.  Once in awhile Peter Hoffman will call us from Savoy and he’ll need something.  But usually he comes with his bike.

Q: You use organic practices and call Oak Grove an organic farm.  Why are you not currently certified?

T.B.: We used to be certified by NOFA NJ. [Oak Grove was on the original committee to set organic standards for NOFA NJ].

Then the organization grew to the point where there were a lot of well-meaning organic people.  But they didn’t make their living from it [for example a garden or a truck patch].  If they lost money on it, it didn’t mean a thing to them. Then these [smaller gardeners] began to say that the certification program wasn’t working, because some of the farms were ‘huge’, so the certifiers were spending different amounts of time at each farm.  They settled on wanting $350 for the inspection fee.  Then, anyone with over 10 acres of production had to pay something extra, a fee, a percentage of their income.

So I ask, ‘How do you plan on doing that?  They wanted to charge 5% of our gross income.   I ask, ‘how are you going to find out what our gross income is?’  One lady said, ‘We’ll demand that you give us a copy of your income tax form.’  Someone else said, ‘That’s illegal’.  So I said, ‘you just destroyed the organization.  No one in their right mind, knowing they’ll be taxed 5%, is going to give you an honest answer of their income.  One lie leads to another lie.  And before you know it, none of the certification process means [anything].

[I wanted the] farmer to fill out the application and report acreage for certification, 10 acres and up.  So, 60 acres, you’re paying on the additional 50 acres.  That way no one lies about anything.  When they voted, seven said no, all of the commercial farmers.  All the rest said yes.

After that, we withdrew from NOFA NJ and didn’t apply for certified organic.  Since then we have printed up a sheet explaining that we grow by traditional organic practices.  Now we call ourselves ‘revolutionary’. 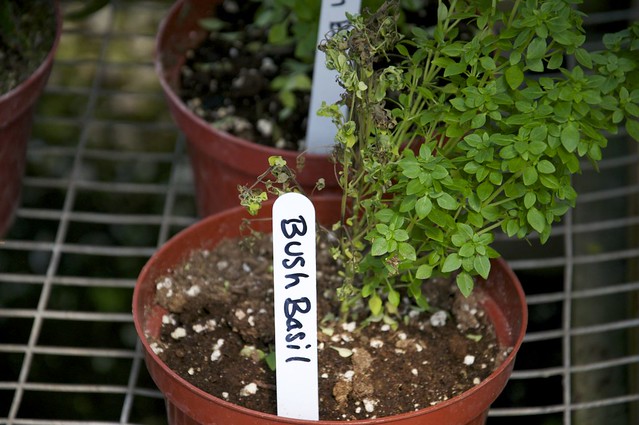 T.B.: At the time I came it was just a few of us [at Union Square]; now it’s halfway down to 14th Street.   We’ve been there 30 years; only four or five who’ve been there longer than us.  We started in 1980—when Union Square opened up, that’s where we went. Ron Binaghi (Stokes Farm) was selling on the north side, too.

Everyday we went to market, we’d hear gun shots go off.   The police would sit in their cars and wait.  It was drug city and they were constantly dealing drugs.

You can also drive, as there will be plenty of parking.  Any additional money not used on ingredients, staffing, and table settings will be donated to a local food pantry.

More details, including how to order tickets, available at http://www.freshfromzone7.com/

This article is cross posted on The Fresh Blog