I can feel it in the ever-warming air: winter is over, and the food at Portland area farmers’ markets has finally started to match the warmer temperatures. Last weekend, some farmers sold their first strawberries of the season; others had tables scattered with tiny containers of peas, tucked beside baskets of fava greens and rhubarb. I sautéed peas into a stir fry last night and felt a palpable excitement about the flavors, colors, and shapes yet to come. I’m not alone: it’s always fascinating to watch market shoppers swell with the temperatures. An easy market trip in February – without tourist or stroller dodging – transforms into a longer ordeal in May. Suddenly there’s a line at your preferred vendor, and you must begrudgingly set an alarm to get to the market before the asparagus runs out. At home, your recipe planning begins to morph from tried-and-true pastas and yes, cabbage again, to scattering cookbooks across the dining room table, eager to capture the sweetness, tartness, and crispness that Spring provides.

This transition away from scheming and dreaming is also felt by farmers. Most spend their winters assessing the previous season, thumbing through seed catalogues, eagerly scanning for new varietals and imagining the countless possibilities. Just as I might wistfully recall a day spent outside in my backyard last summer, a nectarine galette balanced on my lap and a glass of rosé beside me, farmers allow themselves to fondly remember baskets and buckets full of bounty that they grew, perhaps with the scent of basil wafting through the air. And as we dream about recipes we want to try or recreate this summer, farmers think about an heirloom variety of tomato they plan to grow, or if they’re finally ready to integrate pigs into their farm.

Because farm stalls are clustered one after another at your preferred market with similar spreads on each table, it’s easy to focus on your end of the story, instead of theirs. What am I going to make for dinner? Why are those people moving so slowly? How much money do I have to spend today? Farmers’ markets, and even CSA pick-ups, can be busy, rushed affairs. There’s very little time to consider the planning that went into growing a certain crop or why the salad greens are priced a specific way, much less to contemplate the two biggest questions of all: Why is this person a farmer? How did she or he become one? 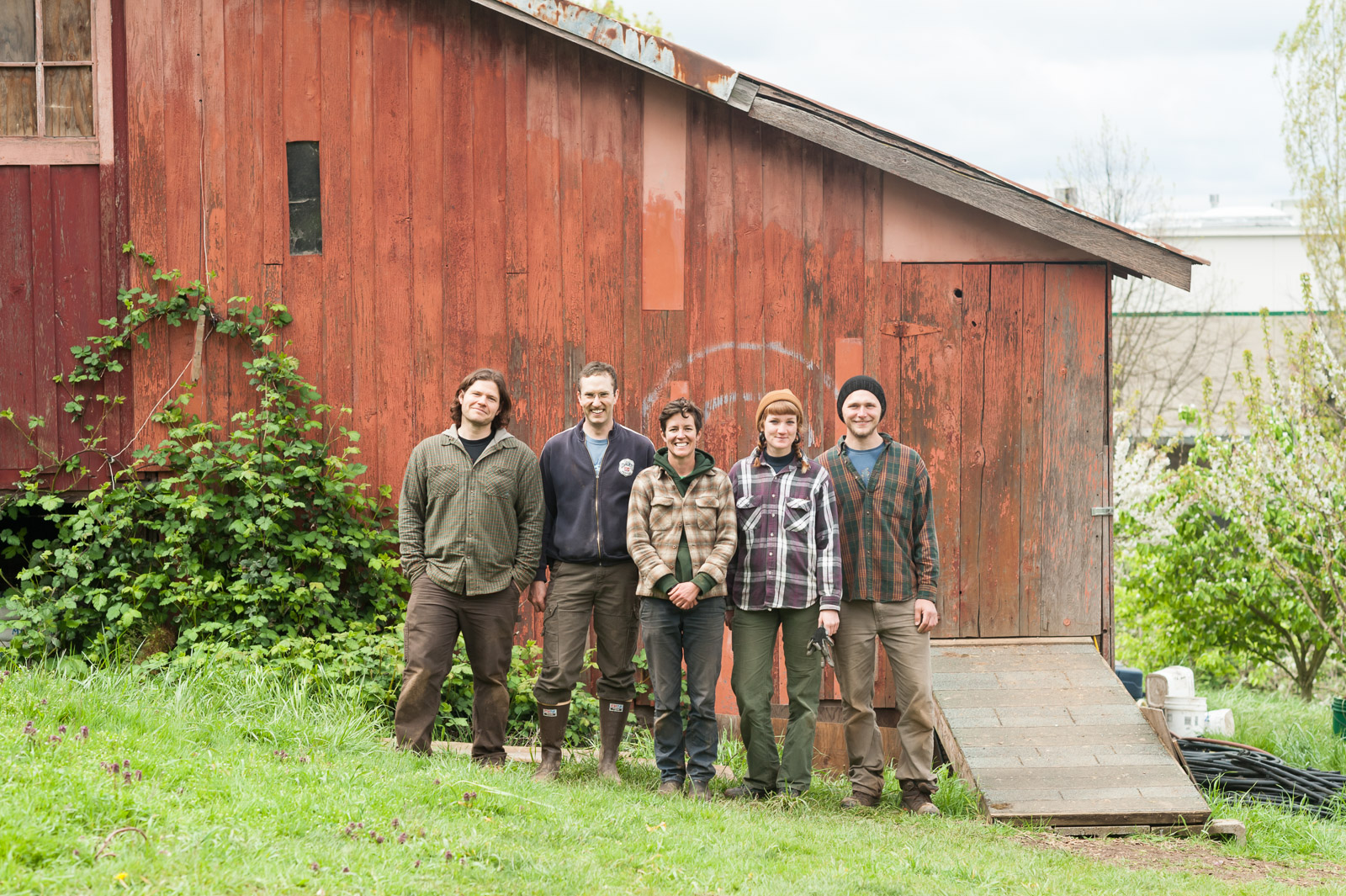 Articles abound with statistics on the relative age of farmers and on ill-distributed food subsidies; many restaurant menus take pride in calling out who their farmer partners are. And of course, social media is littered with perfectly-cropped photos of baby pigs and sheep, the tiniest seedlings, and freshly harvested vegetables, soil still clinging in the crevices. Yet despite this onslaught of data and images, as I wrote recently, we, as a country, need to turn our growing food awareness into something deeper and richer. One of the most common remarks I see on these farm photos, which might have been taken by an actual farmer or merely re-linked, is something along the lines of “this is the dream life”. Admittedly, it can be hard to see past the magical sunset or neat rows of just-sprouting vegetables to understand the complexities of farming. The drudgery of farming. The exhaustion of farming. The anxiety of farming. If asked, most farmers will immediately profess a passionate love for their profession, viewing it as a calling, not a job, but beneath the quick dialogue and softly-focused photos is a definitive fact: farming, like anything else, is a business. Man cannot live on Instagram likes or re-tweets alone.

You could have the prettiest farm around, but who are your customers? And what do you do when an entire crop fails? It’s not enough to want to grow food and live out a bucolic fantasy: it’s imperative that farmers develop and hone a well-researched knowledge base of how to grow food, where to grow food, whom to grow food for, and which networks and systems can help them along the way. Those statistics about aging farmers need not be repeated again, so here’s a different take: while the number of farmers older than 65 is growing faster, “the second fastest growing group [of farmers] is young farmers and ranchers under 35. Most of them are first-generation farmers working on independent farms.” These are farmers who don’t come from traditional farming families, who haven’t inherited land, who didn’t grow up with milking a cow being as second nature to them as pouring a glass of milk. These first-generation farmers must learn their profession differently than others. They can’t rely on family or existing networks, nor do they have the possibility of attending the farm equivalent of graduate school. These farmers, many of whom we shop from, or at least admire from afar, learned via a farm internship.

Culturally, the idea of an internship has morphed from a well-meaning ideal that perhaps never existed (I’ll learn from a committed group of teachers and maybe even have a job waiting for me when I’m finished!) into something that more closely resembles Anne Hathaway’s fate in The Devil Wears Prada (Sure, I’ll happily listen to your cutting lecture on the differences between blue and cerulean. Workers often feel pressured into taking an unpaid internship with the hopes “of gaining employment later on”. For many internship positions, instead of working closely with an mentor who guides eager learners from novices to eventual experts, interns are often nothing more than unpaid errand boys or girls: five years of an internship, often salary-free, and the only thing to show for it are “connections” and debt. The fraught nature of internships is such a persistent complaint and reality among millennials that law firms have sprung up to fight for “internship rights” and payment of back salary.

The farming internship world, while not immune to lawsuits and controversy, offers eager future farmers a chance to do more than clean agricultural tools or provide weary farmers with coffee. In many cases, the farm internship model is the only opportunity for these first-generation farmers to learn the art of agriculture, the seasonal shifts, the hardships and the necessary skills, without the direct financial pressure of running all aspects of a farm operation.

Farm apprenticeship programs and internships exist throughout the United States, all structured slightly differently. And with the recent allotment of an extra $20 million a year into USDA Beginner Farmer and Rancher programs, one can hope that such opportunities will become even more available and beneficial. One might be an intern at Virginia’s Polyface Farm, selected from a competitive field of hundreds of applicants. Others might gain educational and internship opportunities through Stone Barn’s Growing Farmers Initiative and Young Farmers Conference. The Young Farmers Coalition, an organization devoted to this next generation of farmers, lists these nation-wide opportunities on their website, including Rogue Farm Corps, a farmer education and internship program located in Southern Oregon.

One farm internship conspicuously missing from the Young Farmers Coalition list is located a few miles from my house in SE Portland, at Zenger Farm. Located on the former site of Mt. Scott Dairy, the Zenger land was bought by the city of Portland in 1994. An urban farmer named Mark Coucher-Colbert leased two acres from the city to turn into a teaching farm. Friends of Zenger Farm, the organization that runs the non-profit farm, was born in 1999, after a group of community activists formalized their mission. Soon thereafter, a falling-down farmhouse was turned into an education center, and today, Zenger employs eleven people, whose responsibilities range from education coordinator to community involvement coordinator. The heart of Zenger is its six acre working farm nestled above wetlands and beside a small orchard. This farm provides food for a 60 member CSA (many of whom pay using SNAP benefits), stocks a table at Lents Farmers’ Market (a farmers’ market that Friends of Zenger helped to create), and is about to launch a new component of their CSA program: a “prescription CSA” in partnership with several local businesses whose members will also receive education about cooking and nutrition.

The farm is run by Bryan Allan and Sara Cogan, along with a collection of volunteers and interns. Zenger’s formal farm internship program, in which Allan was a participant, began in 2010. Every year since, the farmers have selected three people to learn, cultivate, harvest, weed, and sell food. In exchange for 32 hour work weeks for seven months, the program pays their interns a stipend of $600 a month as well as a CSA share of vegetables. In late March, Zenger welcomed its latest cohorts of interns, the three aspiring farmers selected from a pool of nearly 50 applicants.

Zenger also welcomed me to travel along with these interns as they learn the intricacies of farming, discover hidden talents, increase their frustration tolerance, and begin to synthesize what exactly they hope to achieve in the field of agriculture. In the five years that Zenger has run an internship program, the previous interns have mostly stayed close to Oregon, some working in agriculture, others not. This year, I’ll also be talking and visiting with former Zenger interns to learn more about their experience at Zenger, their current life in (or out) of agriculture, and any perspective they might bring to the farm internship experience.

As I met the 2015 Zenger interns for the first time last month, we chatted at a picnic bench fairly close to a visiting school group that was sitting cross-legged in a circle eating a snack before moving on to their next activity. The children were eager and loud, perhaps excited by the fresh air and break in their routine, and most likely too young to connect their enjoyment to a career in agriculture.

The interns, Brad Remsey, Aaron Maltz and Brittany Giunchigliani, were experiencing similar feelings of eagerness and curiosity, their internship a clear break in the previous routine of their lives, the future still a rather large question mark. The internship ends in October, and being so early in the experience, it’s impossible to predict what these interns will learn, retain, and absorb, and how these lessons might translate 10 years in the future. Zenger’s internship curriculum seems comprehensive, fun, and welcoming. I’m excited to go along on this internship journey, witnessing how one’s attraction to agriculture deepens and matures throughout a season. And for previous interns, I’m curious about where they found themselves upon the internship’s completion. Did they start a farm? If not, what are continued barriers to starting to a career in farming?

Next week, check back in to meet the three new Zenger interns. Over the next several months, return for longer articles about previous Zenger interns, thoughts on farmer training, more insight into the myriad of ways farming interns learn, and of course, more thoughts from Brittany, Aaron, and Brad.