Portland is currently the capital of the independent craftsman (as Crafty Wonderland's recent massive, convention-hall-sized-spread of Etsy sellers clearly illustrated). But even here, many people hold a multitude of misconceptions about those who work out of their homex. Some office workers comment, "oh, it must be nice to stay in your PJs all day", while others state "I could never do that; I'd be too distracted or I'd have no work-life balance."

While working from home doesn't suit everyone, it's possible to achieve a functioning and happy work-life balance anywhere, and even occasionally while wearing PJs. Jason and Alia Hoffman demonstrate that a home office can work even when a business relies more on a hulking letterpress machine than on a few portable laptops. 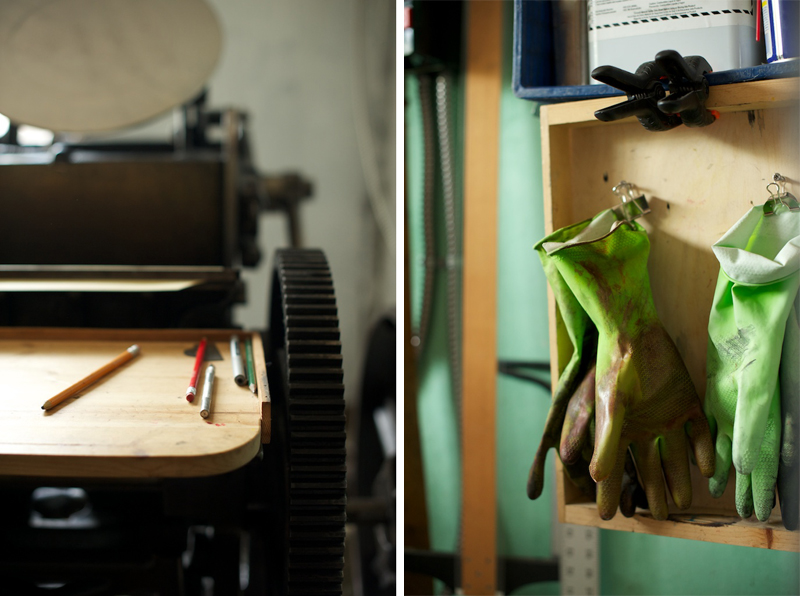 Jason and Alia run their letterpress company, Darling Press Stationers, out of a converted garage of their SE homestead. They balance printing jobs on "Hugo", their letterpress printer, while raising their two children, and caring for their collection of furry creatures (including two bunnies, a dog, and multiple chickens). The Hoffman's living room illustrates their merging of work and home: it serves as the entry to their house, their main meeting space for clients and family, their office, and their children's playroom.

I met Jason and Alia in June, after I contacted them for a quote on printing business cards for These Salty Oats. When I sat down with them at the Fresh Pot in Powell's on Hawthorne, I felt an immediate ease with them that belied the stressed out, hectic atmosphere of the surrounding cafe. As they shared examples of their work and we discussed card stock options, their talent was obvious, but I was equally impressed with their relaxed way of chatting and conducting business. 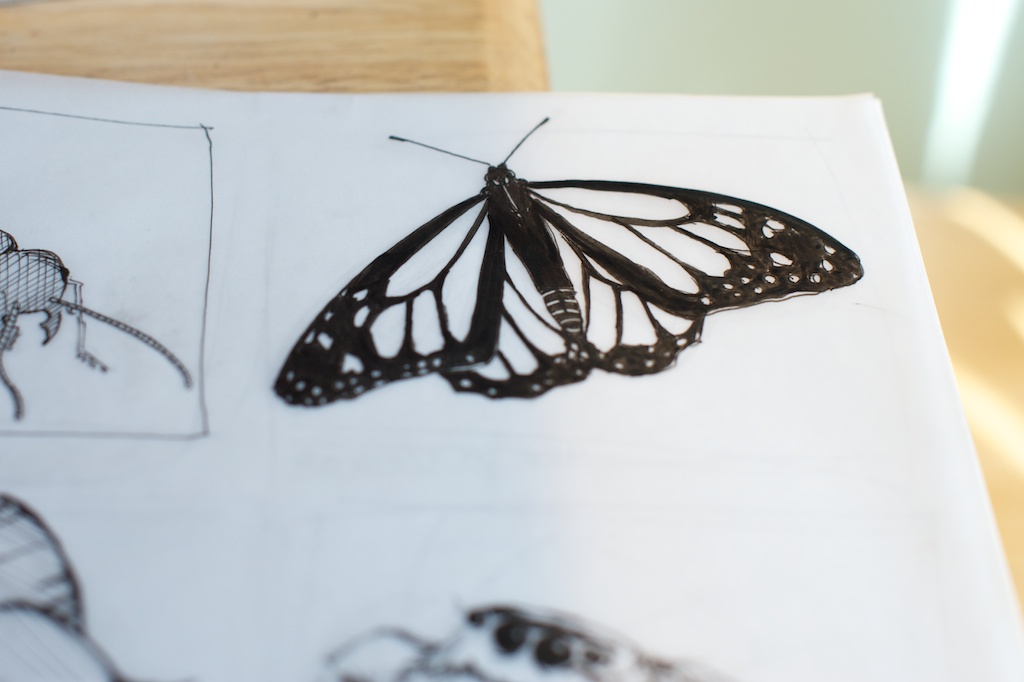 Jason and Alia's work on the These Salty Oats' cards completely exceeded my expectations. After receiving the cards, I broached the idea of a photo series with them. I wanted to see the origin of a project, the synthesis of ideas, and how a design progresses from concept to physical creation. And as someone who also works at home, I was curious to see their studio set-up and to observe their interactions as they parented, sketched, and printed.

Jason and Alia met while studying at the Pacific Northwest College of Art. While they originally studied illustration, several instructors influenced them to shift to printmaking. Although they didn't begin letterpressing until the end of their education, they felt drawn to the process and to the idea that they could combine their affinity for illustration with the technical acumen of (and market for) letterpress. Jason summarizes this sentiment: "It's extremely satisfying to watch my illustrations run through the process of computers, to polymer plates, through our hands, and into the press. The final results can be duplicated indefinitely."

Jason and Alia officially launched Darling Press in 2009, after designing and printing their own wedding invitations. Directly after their wedding, they found themselves selling at craft shows and seeking out retailers. Jason cites the pressures of the "Deadline and the Client" once they began their business. "We either had to learn quick or quit," he says. The first store to carry their cards was Tender Loving Empire in downtown Portland. 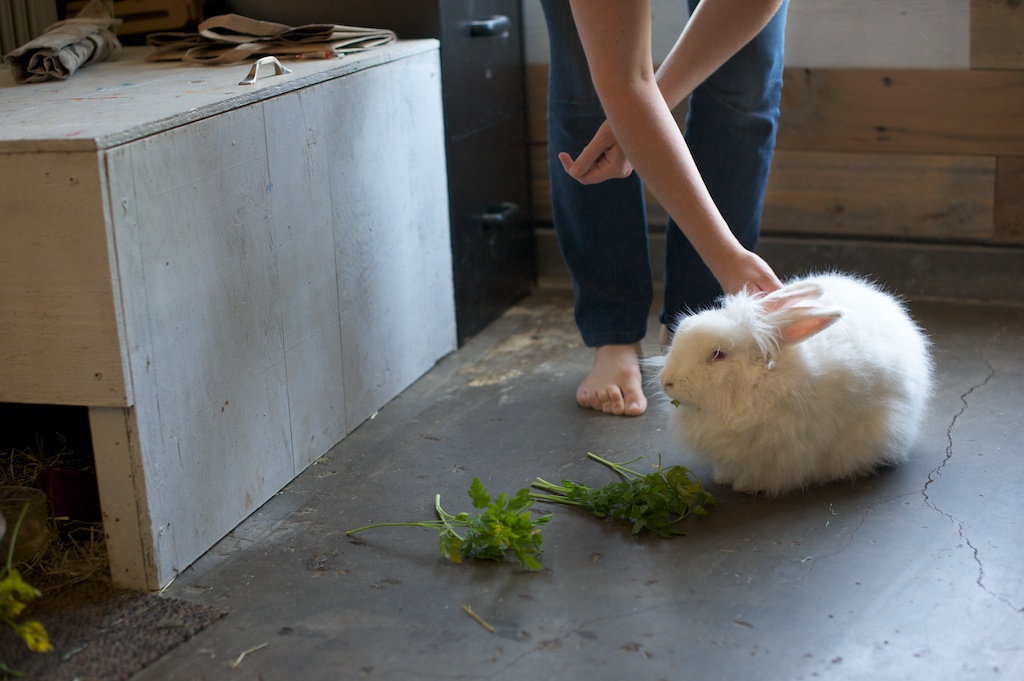 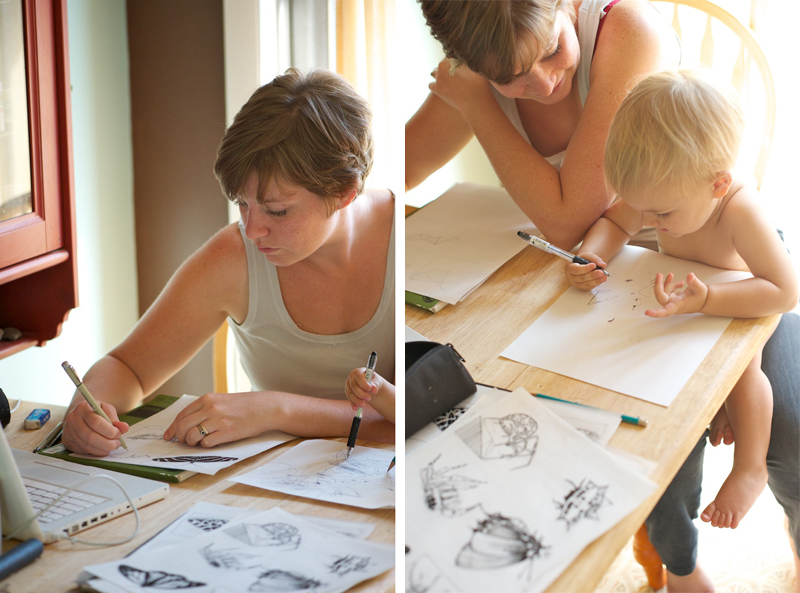 Today, along with selling their cards in specialty stores throughout Portland (and one store in Canada!), they're constantly sketching and designing new illustrations, as well as working with outside clients on wedding invitations, edge painting, and business cards. Although Jason and Alia initially juggled their business with outside jobs (Alia at a home for developmentally disabled adults and then–and now–as a full-time mother, and Jason at PNCA), this year they made the self-proclaimed "terrifying" transition to run and grow Darling Press full-time.

The norm in the Hoffman household is self-sufficiency, whether it's caring for their chickens, experimenting in the kitchen or, as a recent blog post detailed, transforming two practically ruined cast iron skillets into shiningly usable kitchen equipment. Their letterpress machine, Hugo, fits right in with this respect for process, and sheds light on how letterpress is a natural calling for these two illustrators. Along with a fascination with the merging of old technology, new technology, and the creative process, they care for their 100 year old press with respect and a sense of humor. As Alia shares, "I love the fact that our press is a hulking hunk of metal built over a hundred years ago in some antiquated foundry, yet it consistently produces the most delicate impressions on our lush modern paper. Many old presses like ours were melted down during World War I and World War II, but Hugo survived." 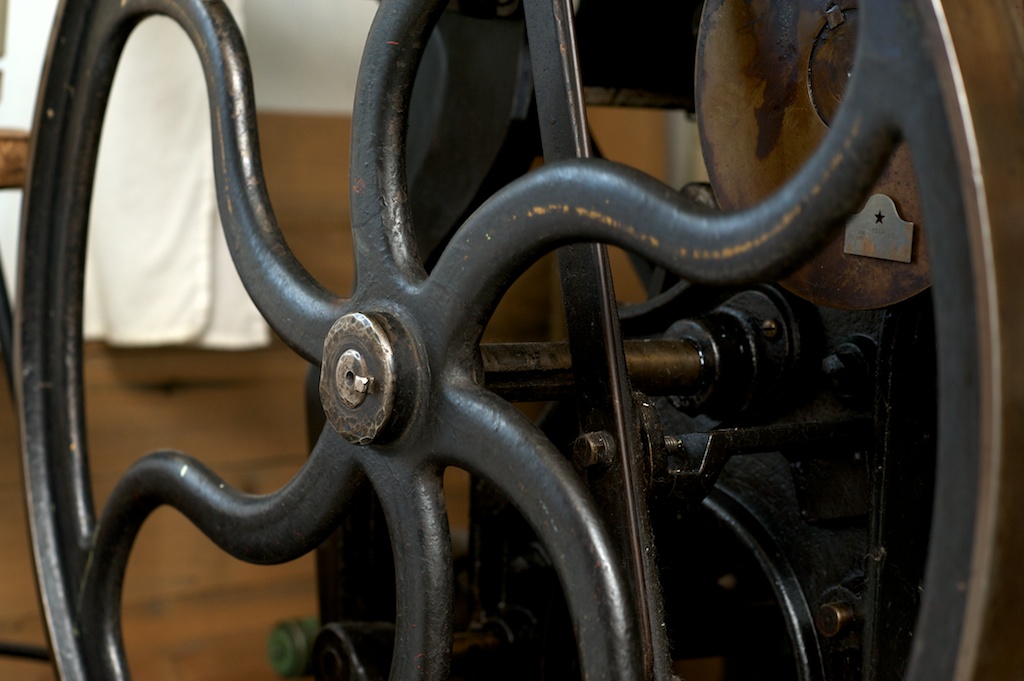 I documented Darling Press' latest project with several visits over three months. From August through November, I watched them conceptualize and create two versions of a memory card game. Alia's set features illustrations of bugs and caterpillars, her childhood fascination, while Jason's is full of drawings of outer-space: planets, an astronaut, stars. Each weekday I visited, Jason and Alia were working on a different aspect of the memory game, with tasks that included creating and sketching the illustrations, gluing paper, and finally, after waiting for the polymer plates to arrive, letterpressing the illustrations.

I witnessed these illustrations transform from mere drawings to letterpressed prints on specially cut cards, quickly understanding what the Hoffmans see in their "hulking piece of metal". Their next step is to create a Kickstarter project to fund completion of the memory card games, which they plan to launch in March. (You can visit their website closer to March for additional information on this project.) 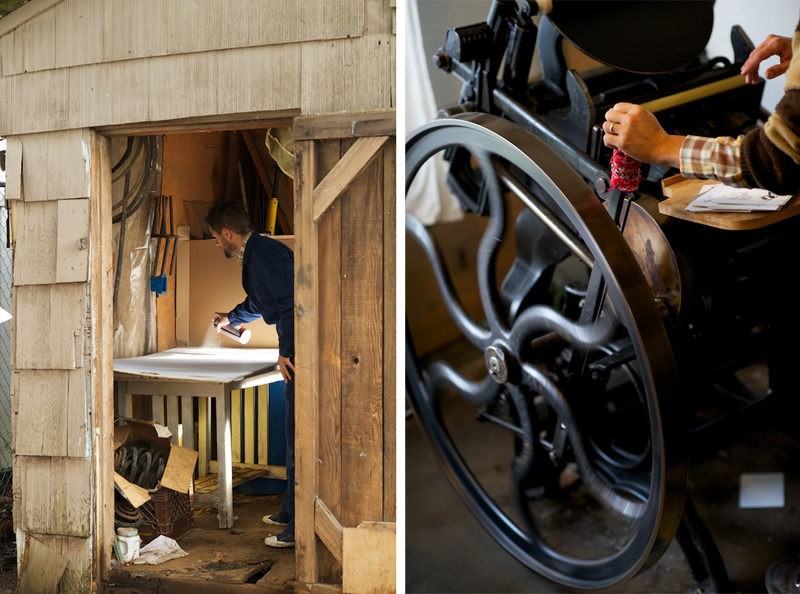 I consistently find myself inspired by people who forge their own paths, whether those people are farmers, bakers, or in the case of the Hoffmans, letterpress printers. Jason and Alia create a happy life for themselves and their children, not defined by outside conceptions or standards. Working from home suits them: they have an ability to connect with and understand what's important in the present, without acting blasé about their business. While they both acknowledge that work and home life has no perfect balance (with the "constant pressure to do housework", the desire to be present with their children, and the stresses of shifting priorities), it's clear that they thrive from working together in their home.

Most importantly for their business, their inspiration comes FROM their home: their house, their garden, and their children.

Jason and Alia are very direct about future goals (which include interns, a second press, wedding set designs, and even, ultimately, a brick and mortar shop), yet in the moment, they are always attuned to their children's needs, operating without noticeable stress. 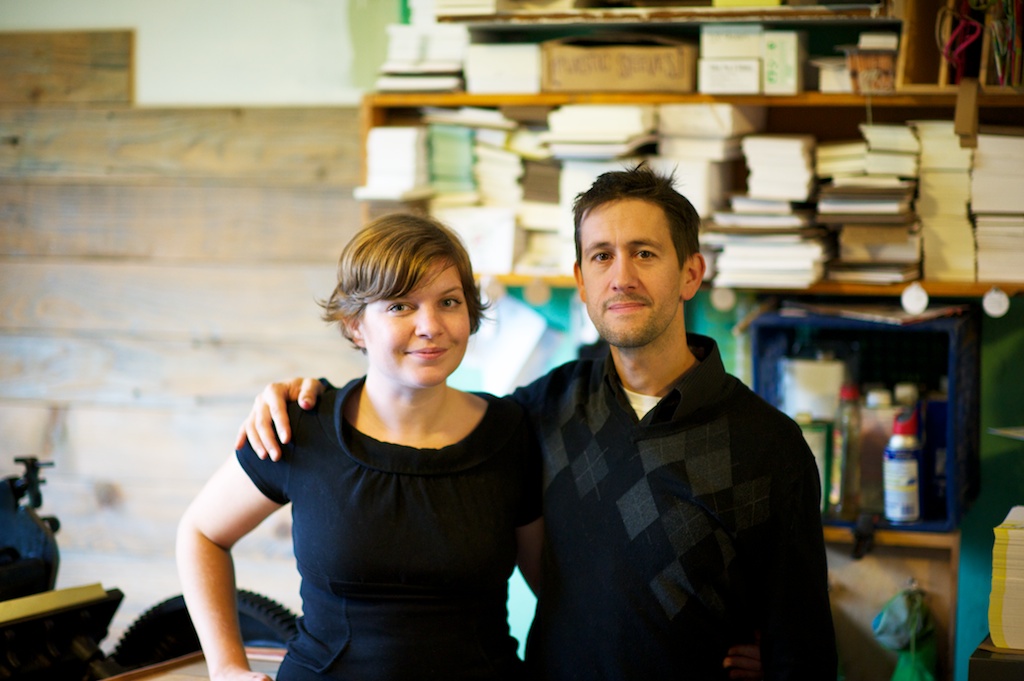 The Darling Press couple show that running a business from home may not be the easiest path, but it can certainly be a rewarding one. As Jason and Alia's creative energies move from the professional, to the personal, and back again, it's clear that the best "work-life balance" is not a "balance" at all, but rather a continuous flow of creative inspirations. While this set-up only works with high levels of patience, flexibility, and effort, for Darling Press, the results are clearly worth it.