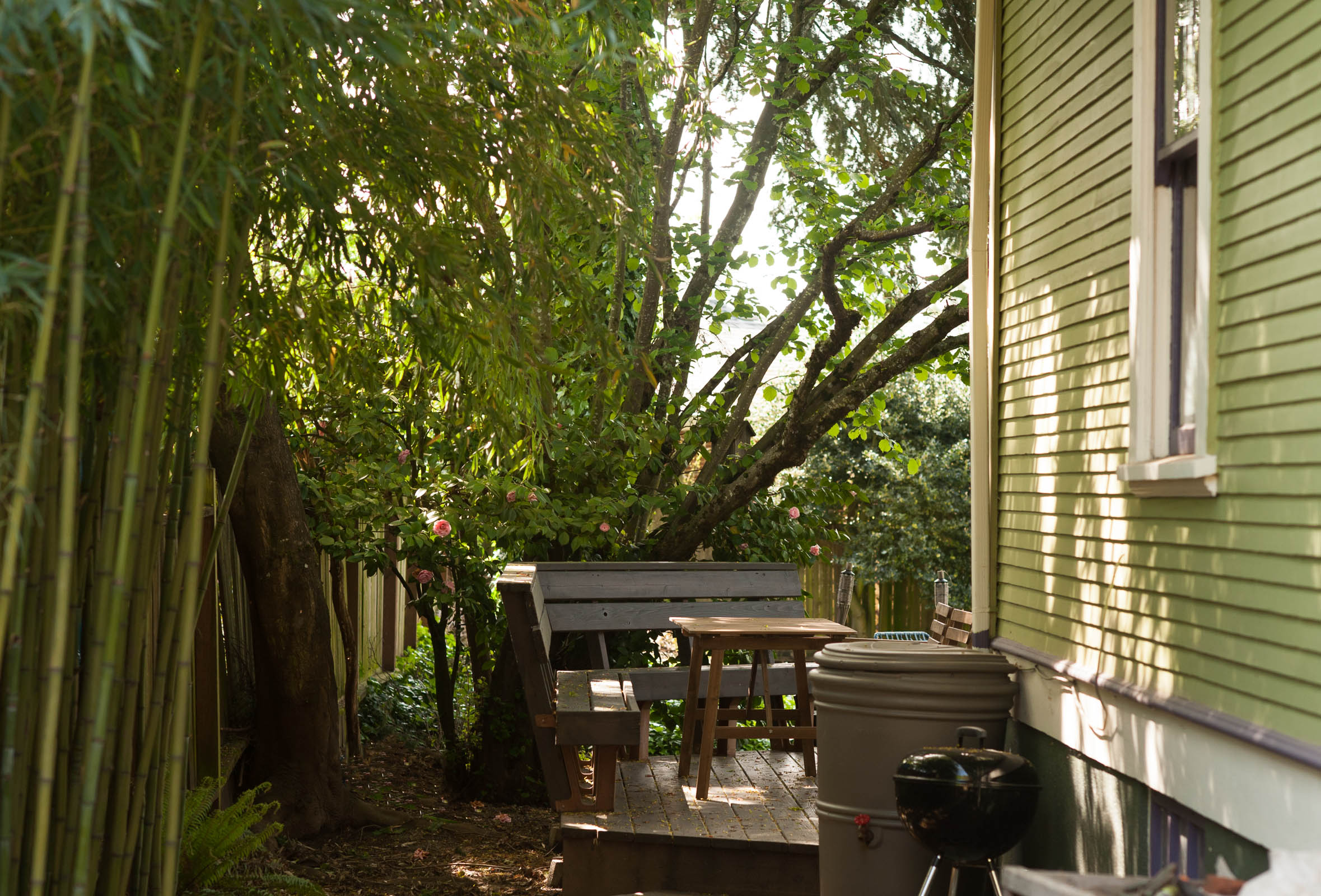 We moved in February, leaving behind two years of garden experimentation at our rental house. Gardening at a rental had its benefits, as I transitioned from curiously cultivating my fire escape to battling an overgrown backyard. In many ways, I started from scratch in that backyard two years ago: I felt eager, but had very little applicable experience. I researched and bought books on everything, learning about appropriate potting soil and compost mixtures, sunlight requirements for certain plants, and how to handle pests (of which I had zero experience back in Brooklyn, except for the landlord who asked us to the remove the containers). 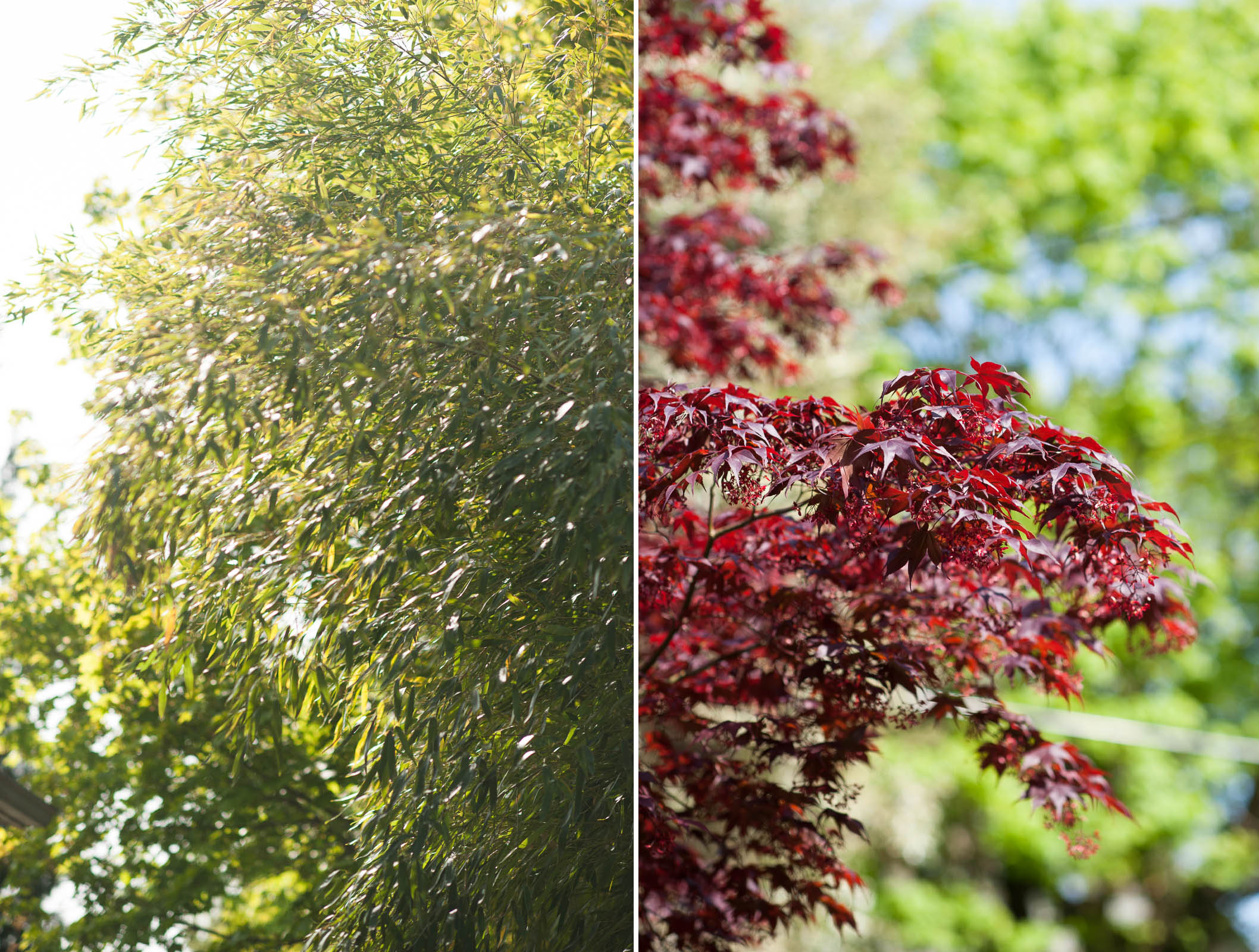 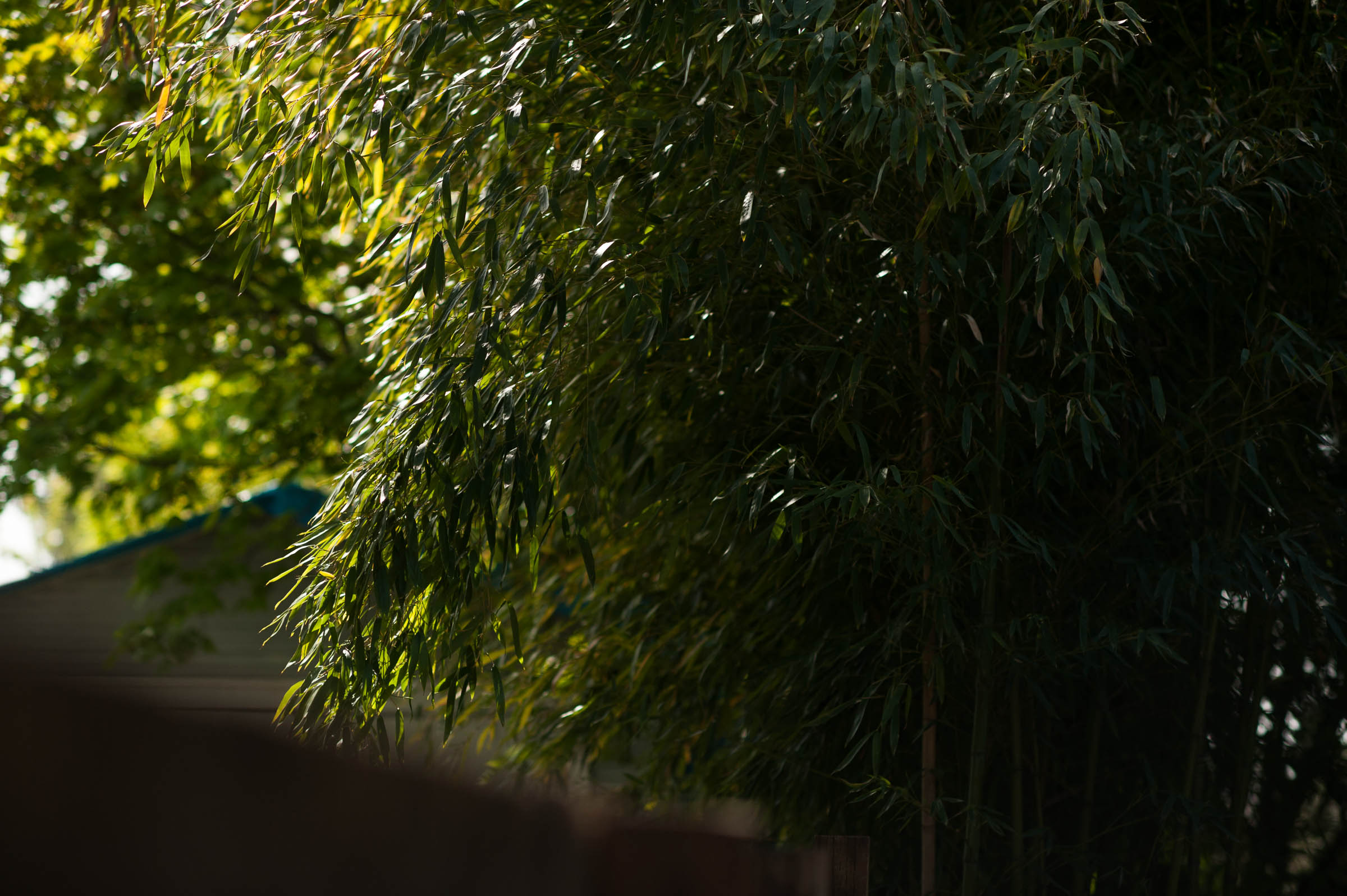 The first summer of planting and harvesting felt overwhelming and exhilarating. I didn’t pursue gardening as a means of supplanting our bountiful hauls from the farmers’ market or dropping our CSA membership; rather, I sought understanding as much as vegetables, hoping to complement my knowledge of food and farming with more personal experiences. I sought to gain an appreciation for the intricate balance between nature and nurture in a garden, for how much care is applied to foods that we take for granted, like potatoes or onions or carrots. Curiosity, too, was a factor: I wanted to know which foods I could fairly easily grow, especially if there were a financial benefit to growing certain foods instead of buying them. 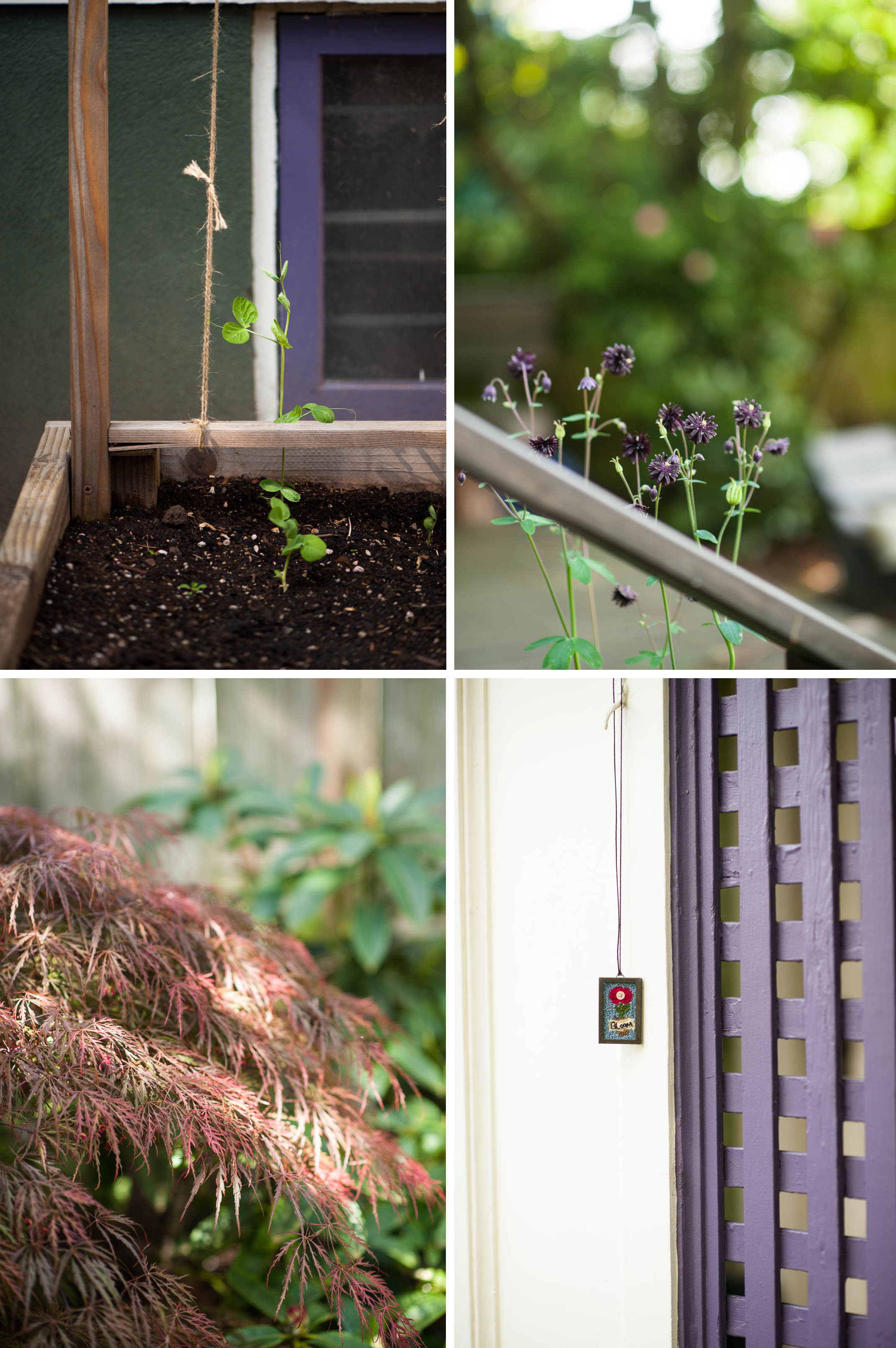 At our previous house, I planted from a mixture of seeds and starts, having great success in the earlier season and much less as the summer led into fall. Like any new relationship, I’m still learning patterns and preferences at our current home. On the immensely positive side, we bought a house that is without a mimosa tree, a gumball tree, a chainlink fence, and years of neglect. Instead, our house has several raised beds along its eastern side, a large backyard ringed with daffodils, tulips, and phlox, and a mostly grass (partly weed) front lawn begging for something more. The yard is a blank canvas: instead of erasing a poorly rendered sketch and forever dealing with smudged paper, I feel like I’ve flipped to fresh white page, pencil poised. 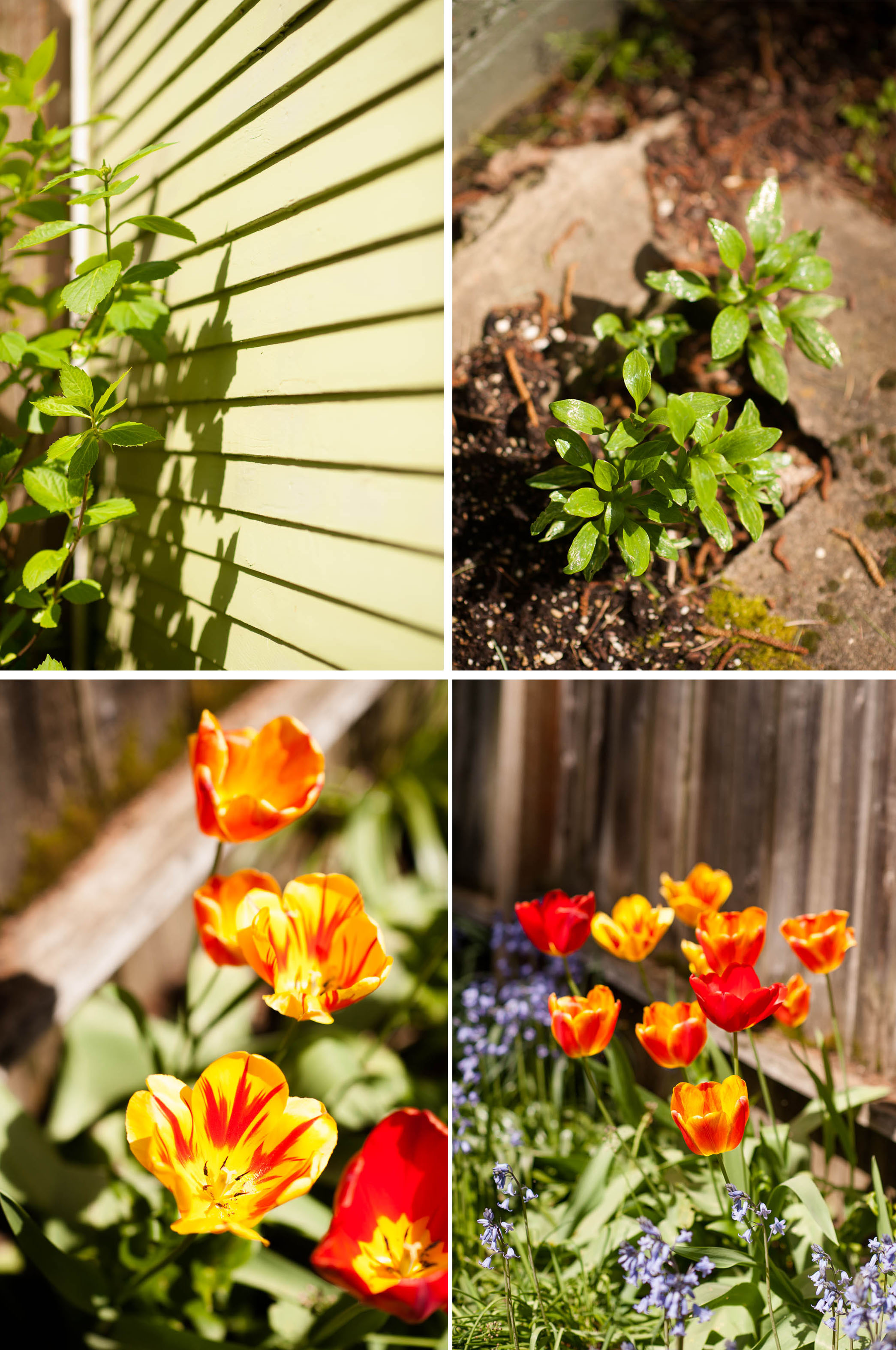 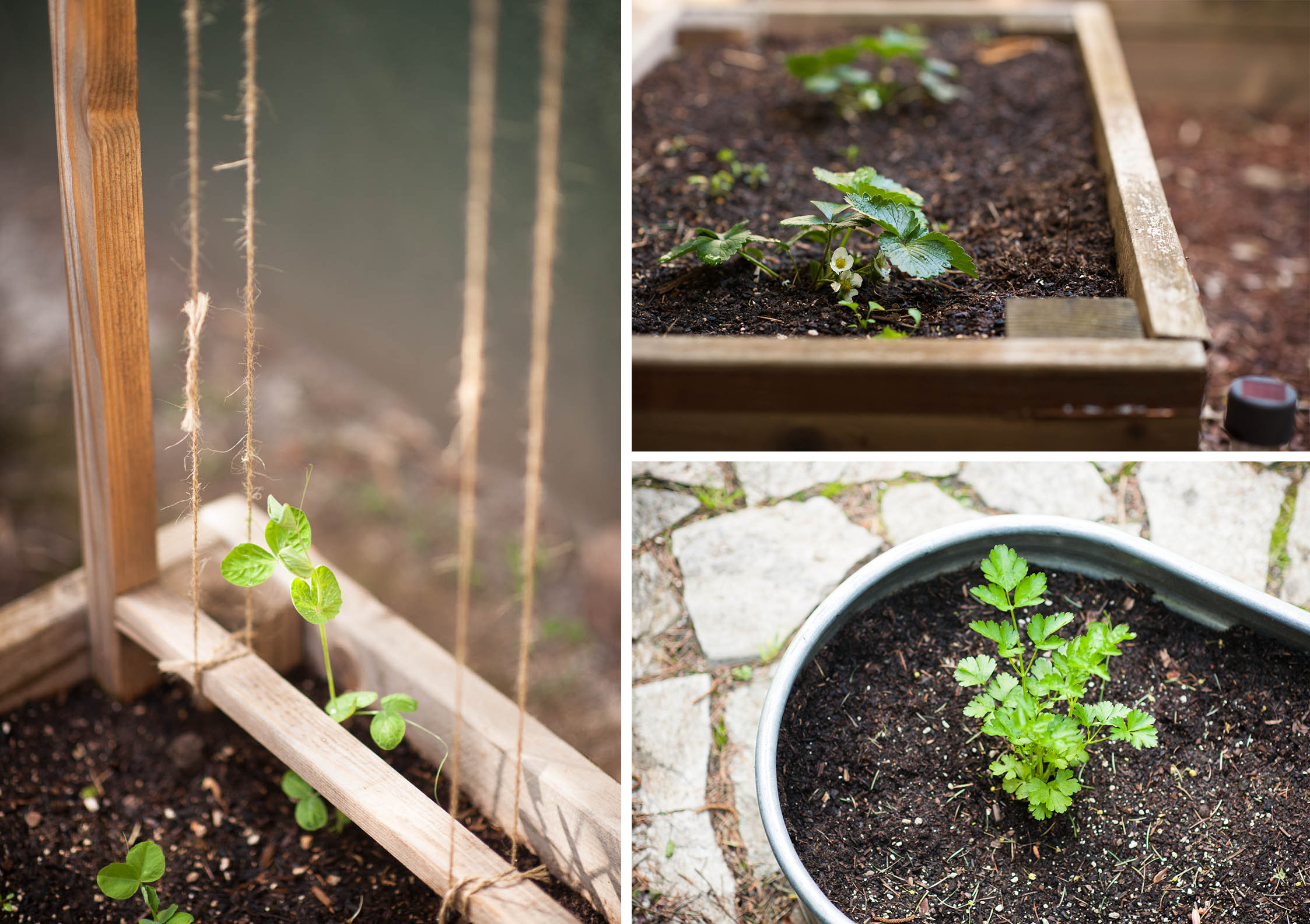 The most resonant trait I gained from my three years of rental gardening is my newfound ability to flexibly pivot. I had immediate success in direct sowing salad greens at the previous property; at this house, the squirrels seemingly control the yard, and the day after I direct seeded lettuce, carrots, and spinach, they’d dug holes throughout the raised beds, scattering the seeds everywhere. In the weeks since, some survivor seedlings have poked through the soil, making their presence known a foot away from where they were originally sowed. Many, of course, never germinated.

It was more of the same for most of the direct sowing I did in containers: the squirrels dug giant holes, making the tiny marigold, calendula, and sage seeds impossible to find and return. When I sowed sunflower seeds directly into the ground along our shed and faced freshly dug holes the next morning, I pivoted away from that strategy. Now I know: at this house, I can’t sow seeds outdoors, at least in the spring when our resident squirrels are bounding all over the trees and chattering to each other, and sometimes at our cat. Instead, I’ve started a few of those discarded seeds indoors, with full awareness that the seedlings will be far off their planting schedule. And for the seeds that never come up, I’m certainly not opposed to seedlings: many amazing farms at the farmers’ market sell healthy, vibrant starts. Last year, my greatest garden success came from tomato and pepper starts I received from Pitchfork and Crow. 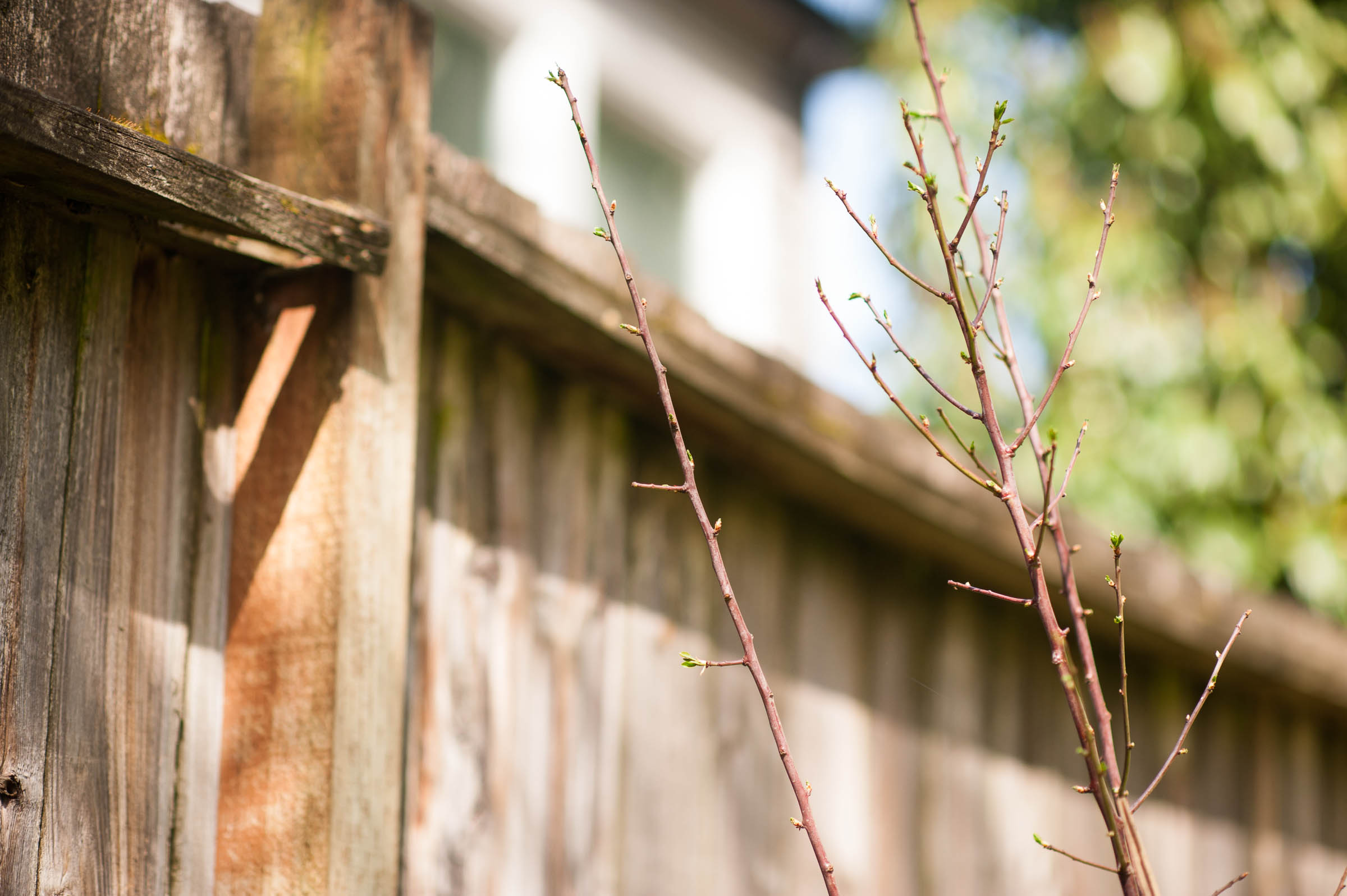 While Justin and I have great plans swirling around in our heads about transforming the backyard into an oasis, applying permaculture principles, and getting rid of all that grass (or at least most of it), we also recognize the limitations of time and money, and the benefits of moving slowly. We’re not renting: we don’t have to make immediate changes, many of which will turn out to be ill advised or expensive to undo. Instead, we’re trying to apply one of the first features of permaculture: observation. I’m using the year to observe where the light falls, how soil drains, what animals and insects (beneficial and otherwise) are attracted to our yard, and which plants thrive. 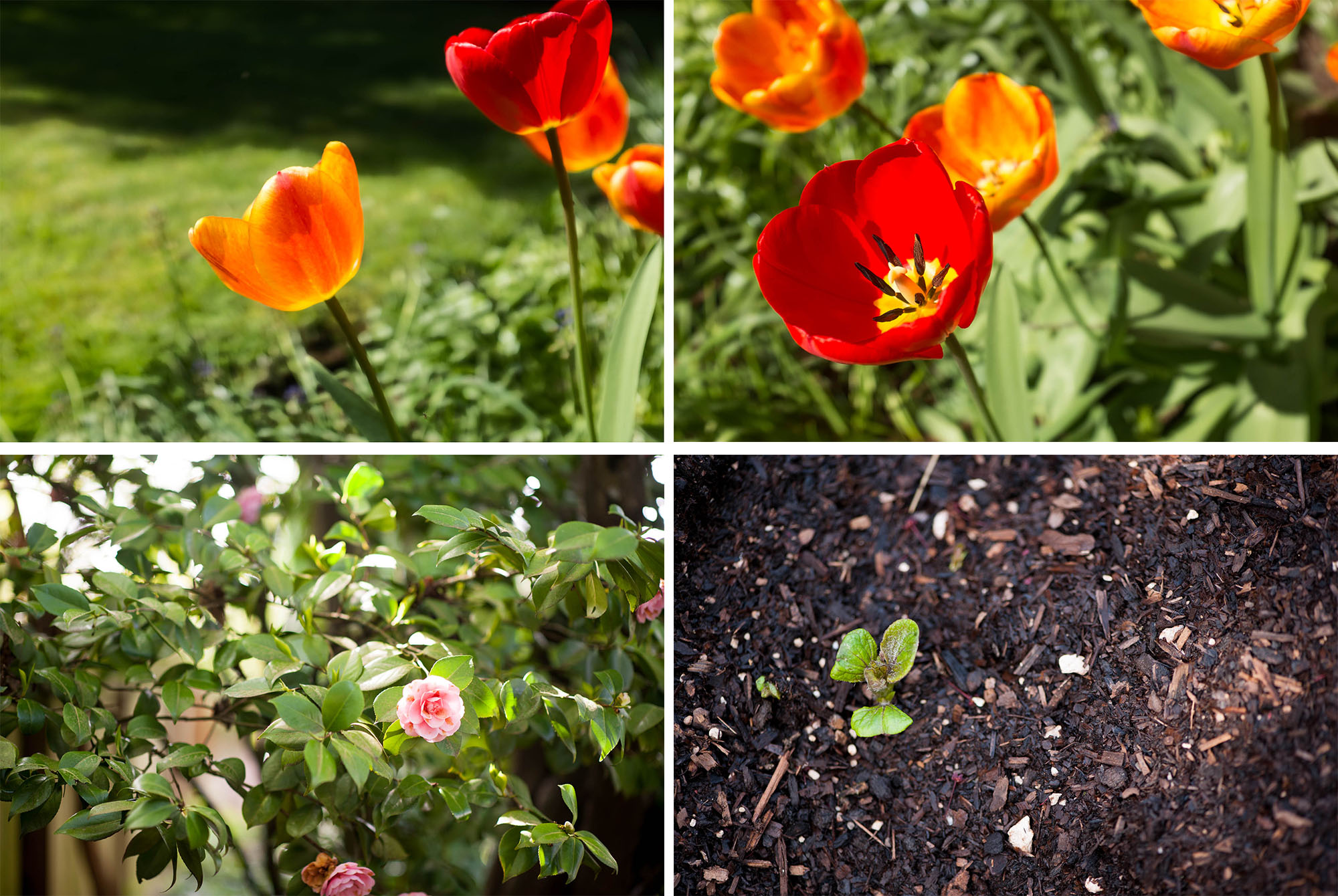 On the list of currently thriving plants – at least as I type this – are two varieties of peas, Amish Snap and Blue Podded Shelling, fingerling and bintje potatoes in the front yard raised bed that we constructed, lavender along the front berm, and strawberries. Because of our house’s placement, the eastern raised beds receive light ten hours out of the day, and the pots on our back deck receive light for around seven hours. We were gifted an almond tree (that’s worthy of an exclamation point, so, !) that I planted along the western fence of the property, in a place that appears to absorb seven to eight hours of sunlight a day, which doesn’t account for the radiant heat the fence collects and bounces back into the tree and soil. We also planted two artichoke plants in the same western bed near the fence. I’ve already noticed a few holes in the leaves that weren’t present when I planted them: I’ll have to monitor that to determine future steps. 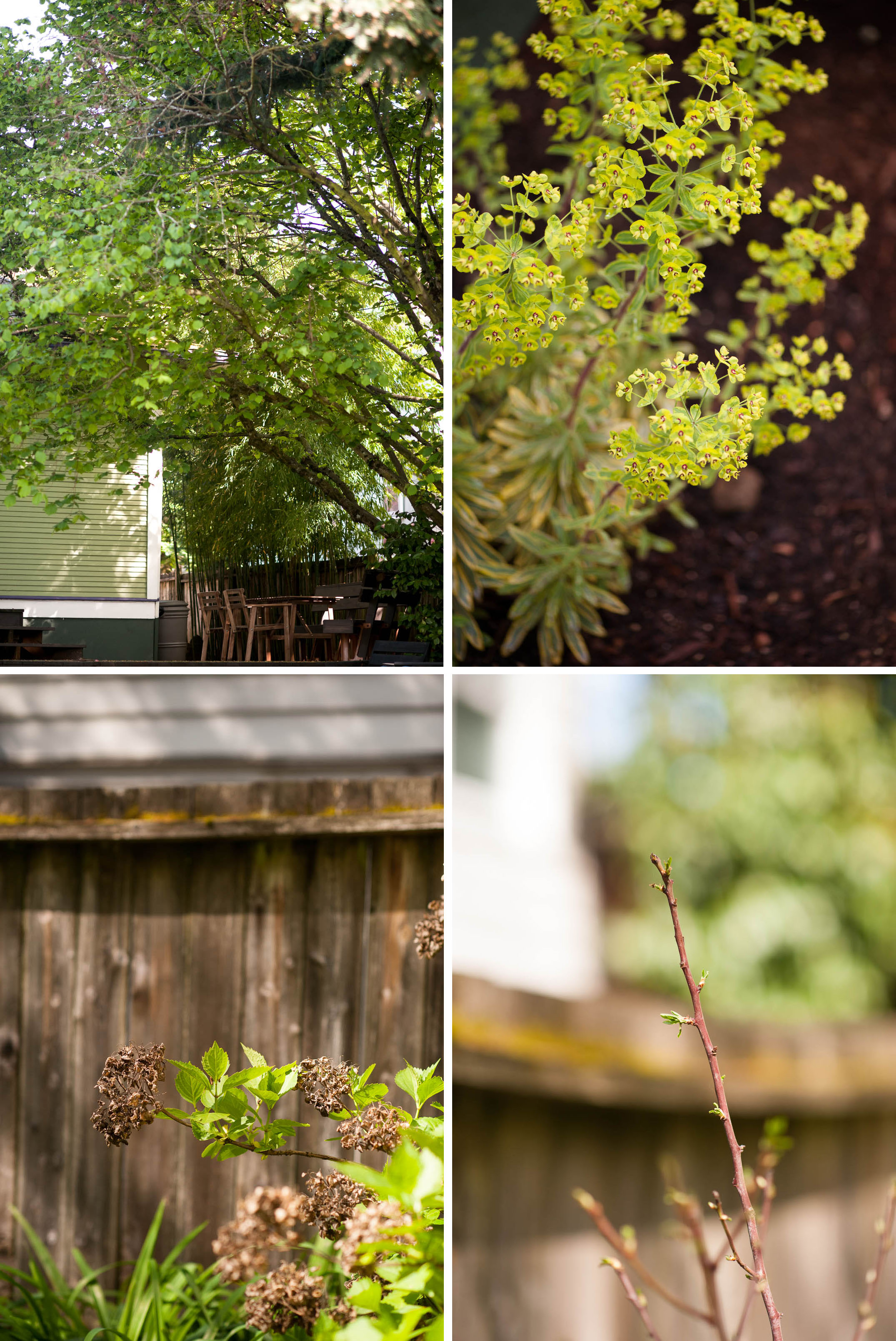 Ideally, our yard will become a mixture of edibles, beneficial flowers, and trees, planted with an awareness of light, wind, and soil patterns. The backyard is dominated by three massively tall pine trees, three holly trees, and a collection of smaller plants, including a Japanese maple and rhododendrons, and an overgrown, but gorgeous, flower bed. There’s room to maintain most of those plants while working to build a more cohesive ecosystem. But, all in good time. For now, I watch. 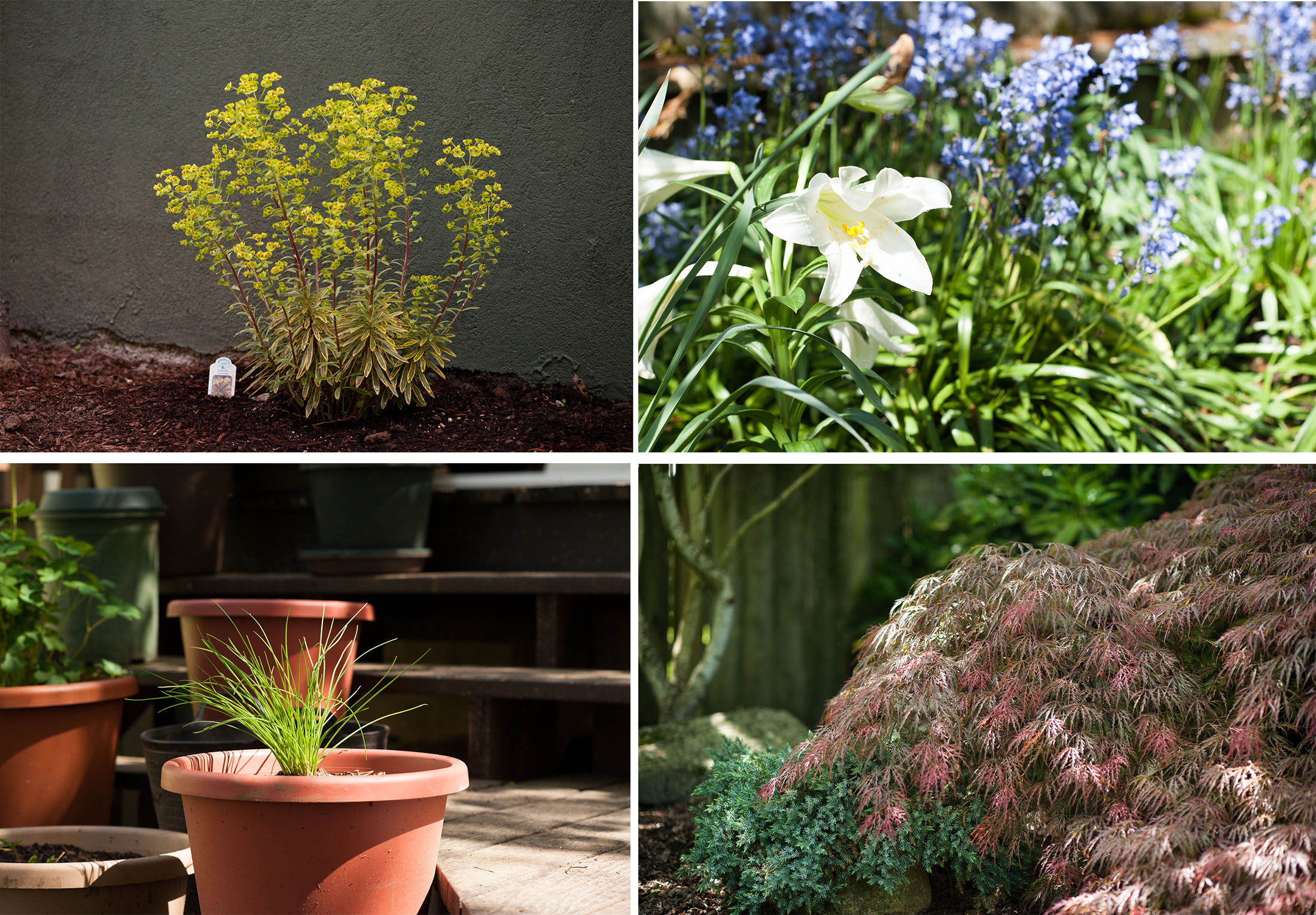