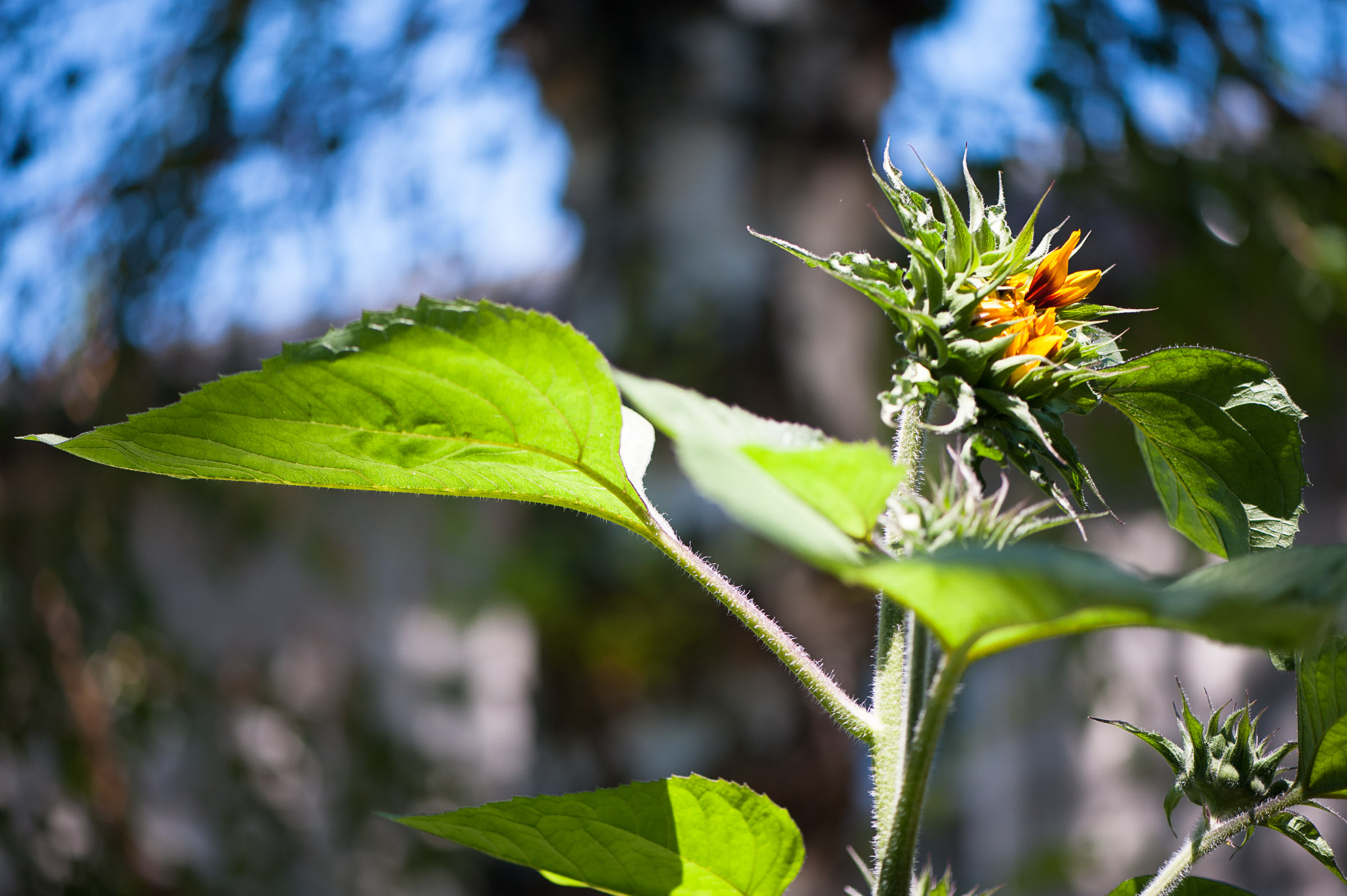 The garden really comes into its own by early July. After months of excessive care, problem solving, and troubleshooting, my time spent in the garden at this point is – for the most part – relaxed. I can simply sit on the back deck and look at it. I can wander amongst the raised beds and take notice of just-opened calendula and about-to-open sunflowers. I can make guesses as to when those green tomatoes will transform into red orbs. It’s at this point in the season, every year since I’ve gardened, that I find myself wondering if there’s more I should be doing. I suppose when you spend an entire spring seeding, potting up, setting up slug and pill bug bait, laying protective netting, and hammering in stakes for trellises, it’s natural to feel confused that this period in July is simply about enjoyment. 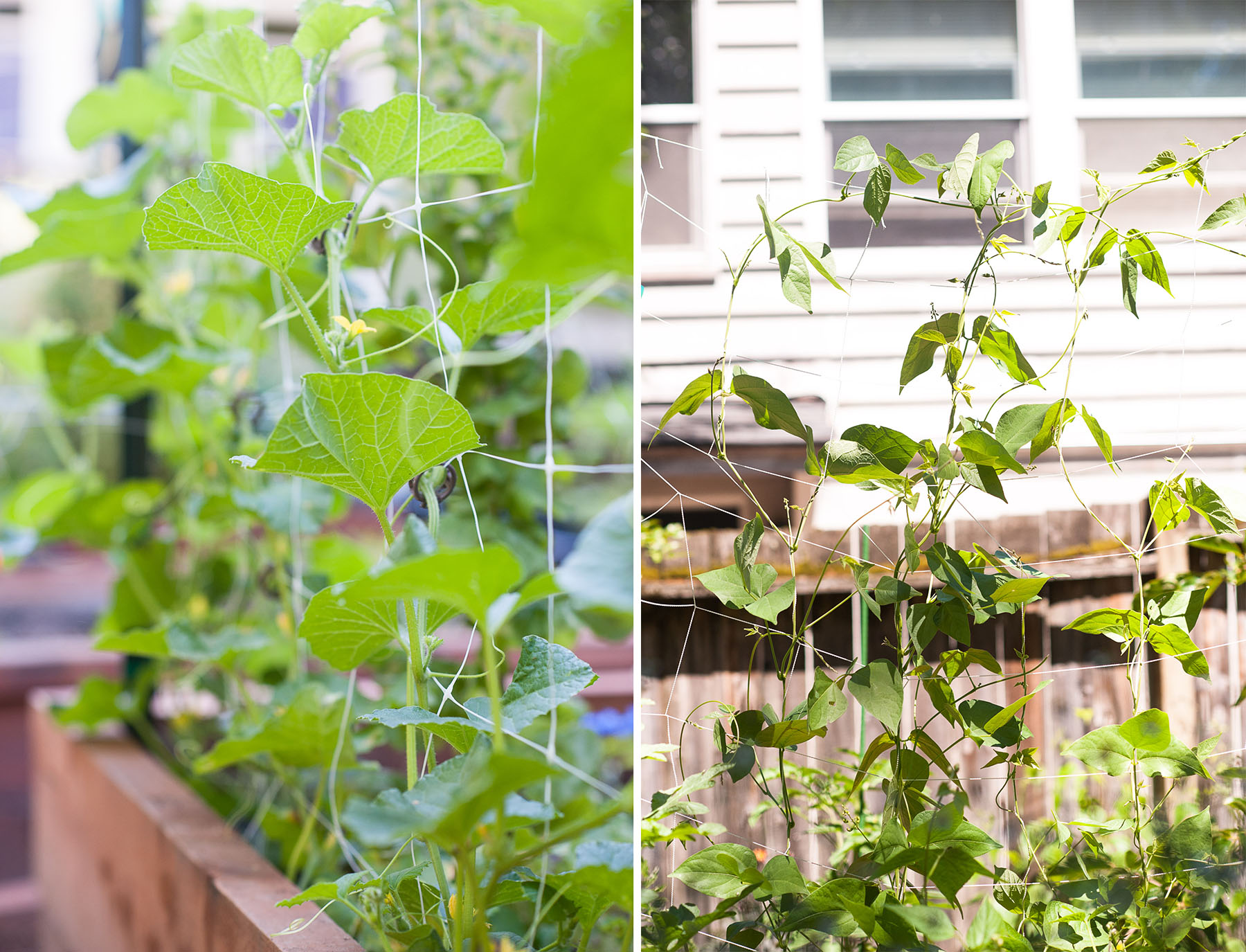 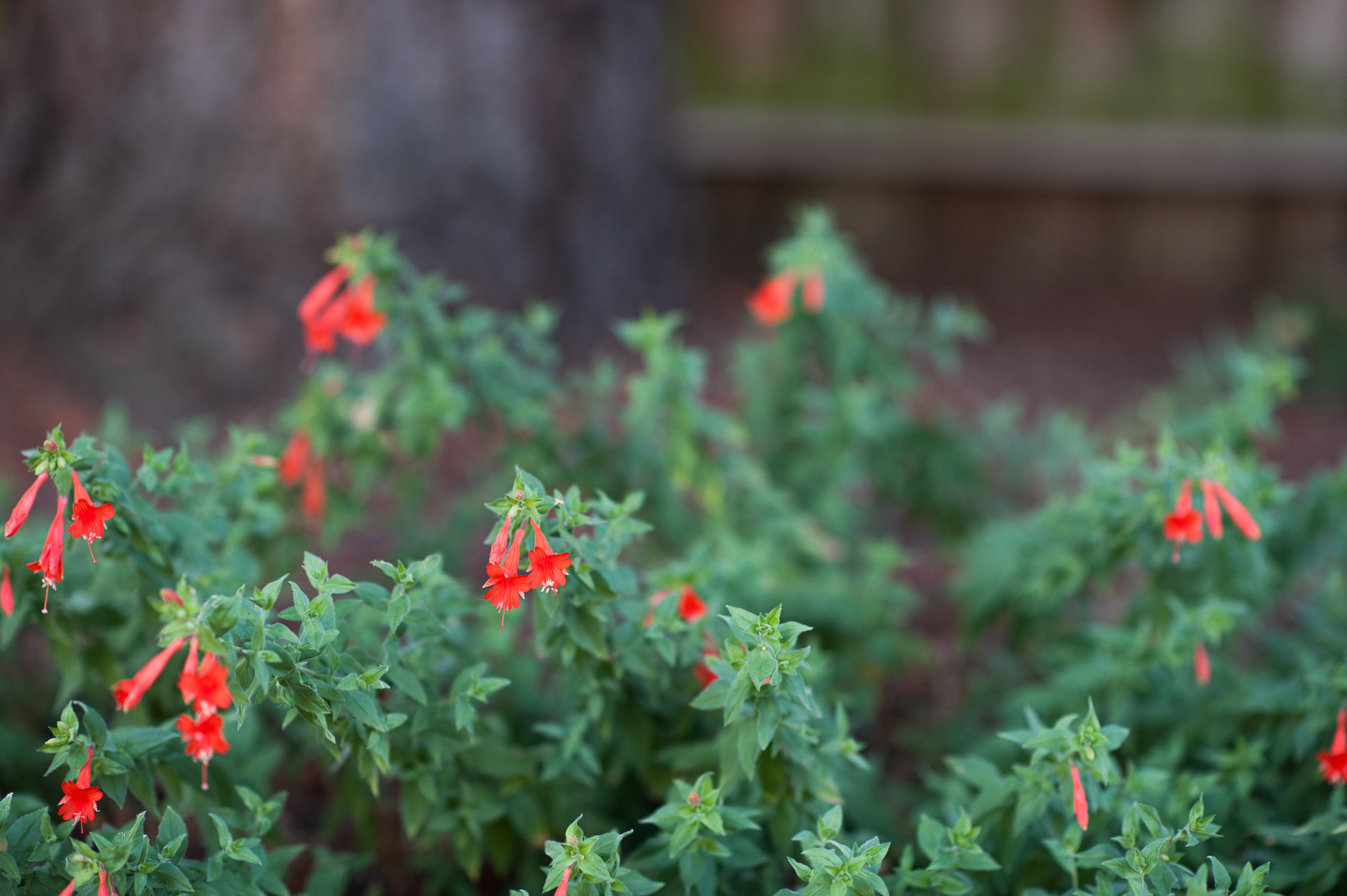 Many beds look entirely different since I last wrote. I harvested all of the beets, kale, mustard greens, and salad, substituting beans, melons, squash, and potatoes. I considered that moment the first big transition in the 2016 garden, and in a month or so I’ll face another transition, as certain crops and flowers such as cabbage and chamomile are spent. I’m already mentally delaying that particular moment because the removal of those items will leave unsightly gaps in the beds for a few weeks, until I transplant out the next round of food – food meant for the fall-winter garden. That’s right, I’m growing a fall-winter garden this year. The heat mat and humidity dome are back and active on our kitchen island, starting greens like arugula that will be transplanted later in August. 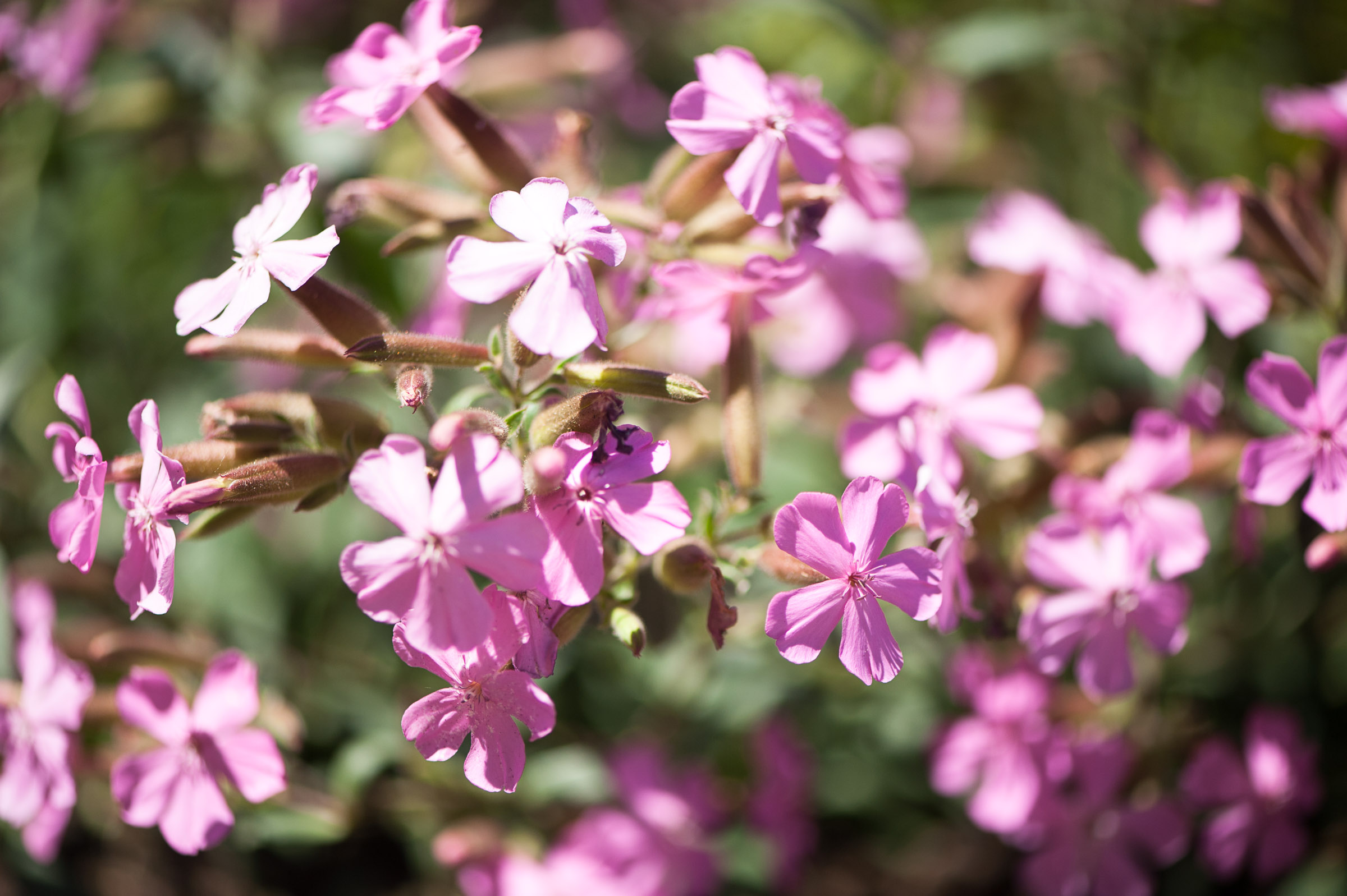 Every garden has constant ups and downs; the key is to not become overly bogged down by what’s not working. The tomatoes, including the ones in the pots, are fruiting and flowering. I’ve successfully trained the melons to grow vertically, at least so far, and they’re happily flowering. I’m also encouraging the butternut squash to grow vertically. I saw this at another gardener’s place last year, and have been intrigued ever since. It’s not only space-saving (the squash vines were all over our yard last year), it’s just cool looking: huge squash hanging from a trellis without breaking – it seems to defy gravity. (I’ll help by cushioning them in old t-shirts and rags). 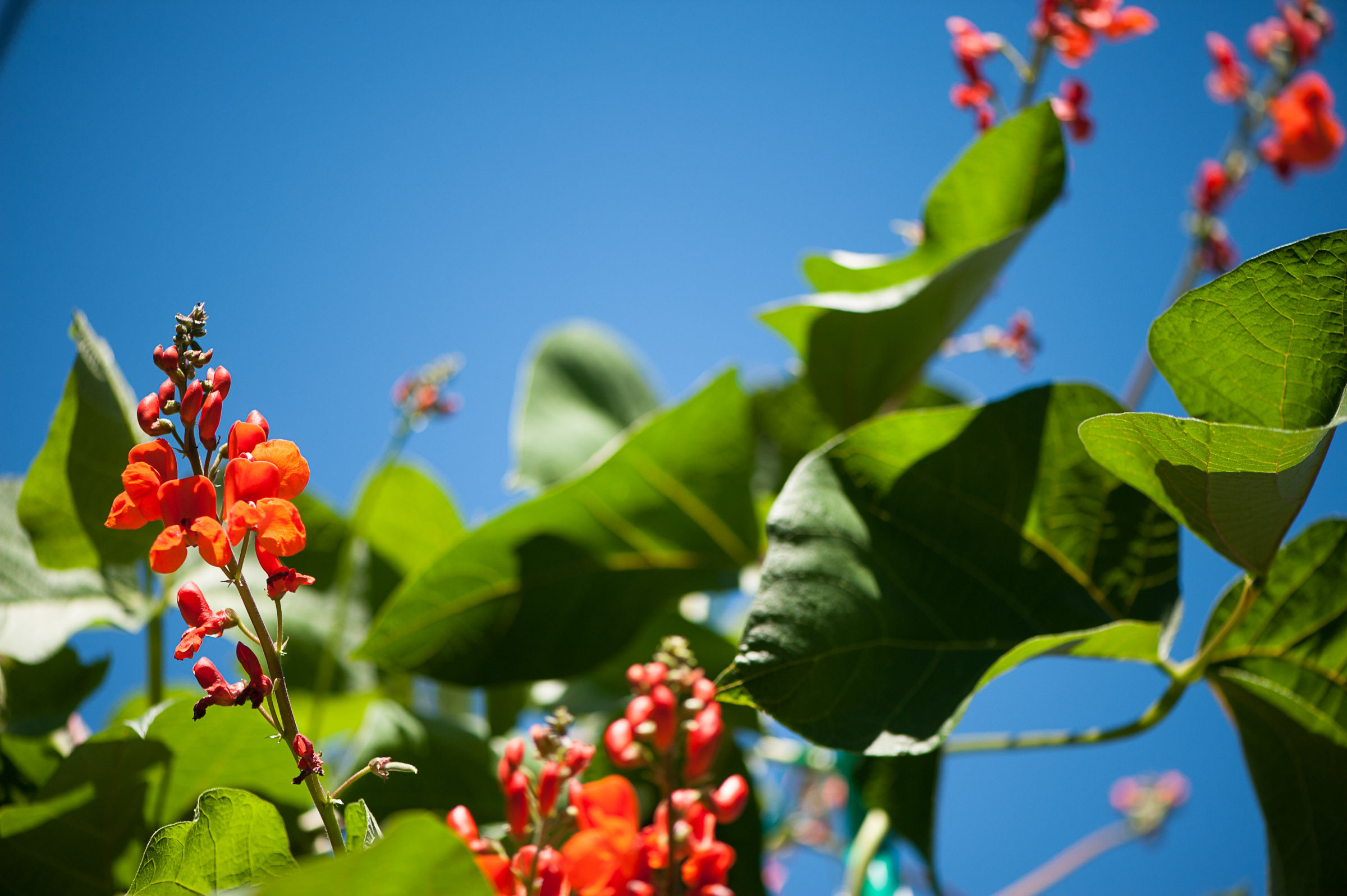 I planted zucchini for the first time this year. I’ve never been inclined to grow it, since it’s abundant at any market and incredibly affordable. But I was curious to grow it myself, and as such, we haven’t bought zucchini in over a month. Despite eating zucchini sometimes for three meals a day (luckily we have a huge repertoire of zucchini recipes), I’m still behind on harvesting and often end up cutting out baseball bats. But these bat-sized squash make perfect zucchini loaves; I’ve frozen three loaves, with probably a dozen more destined to be made and frozen. 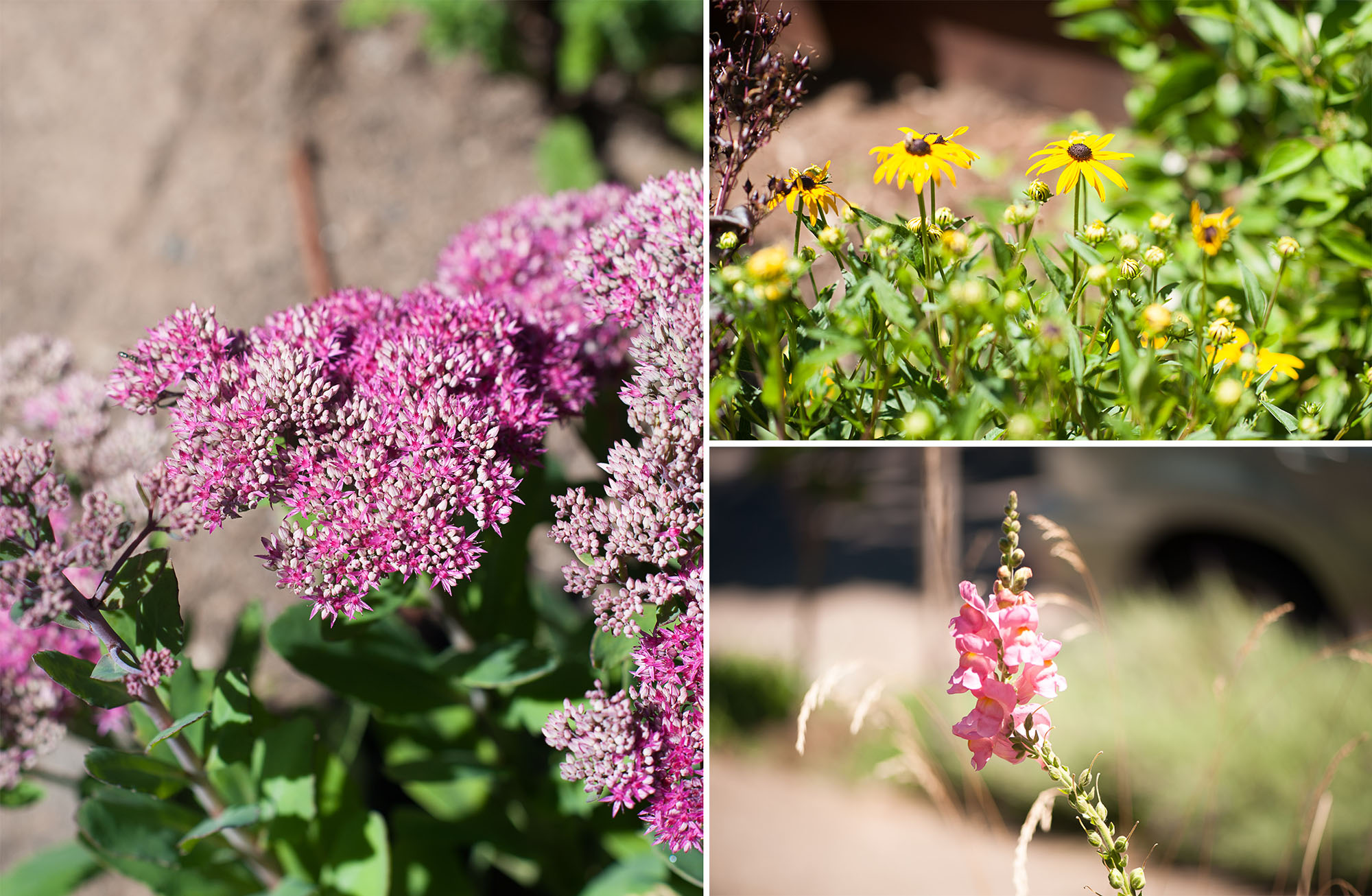 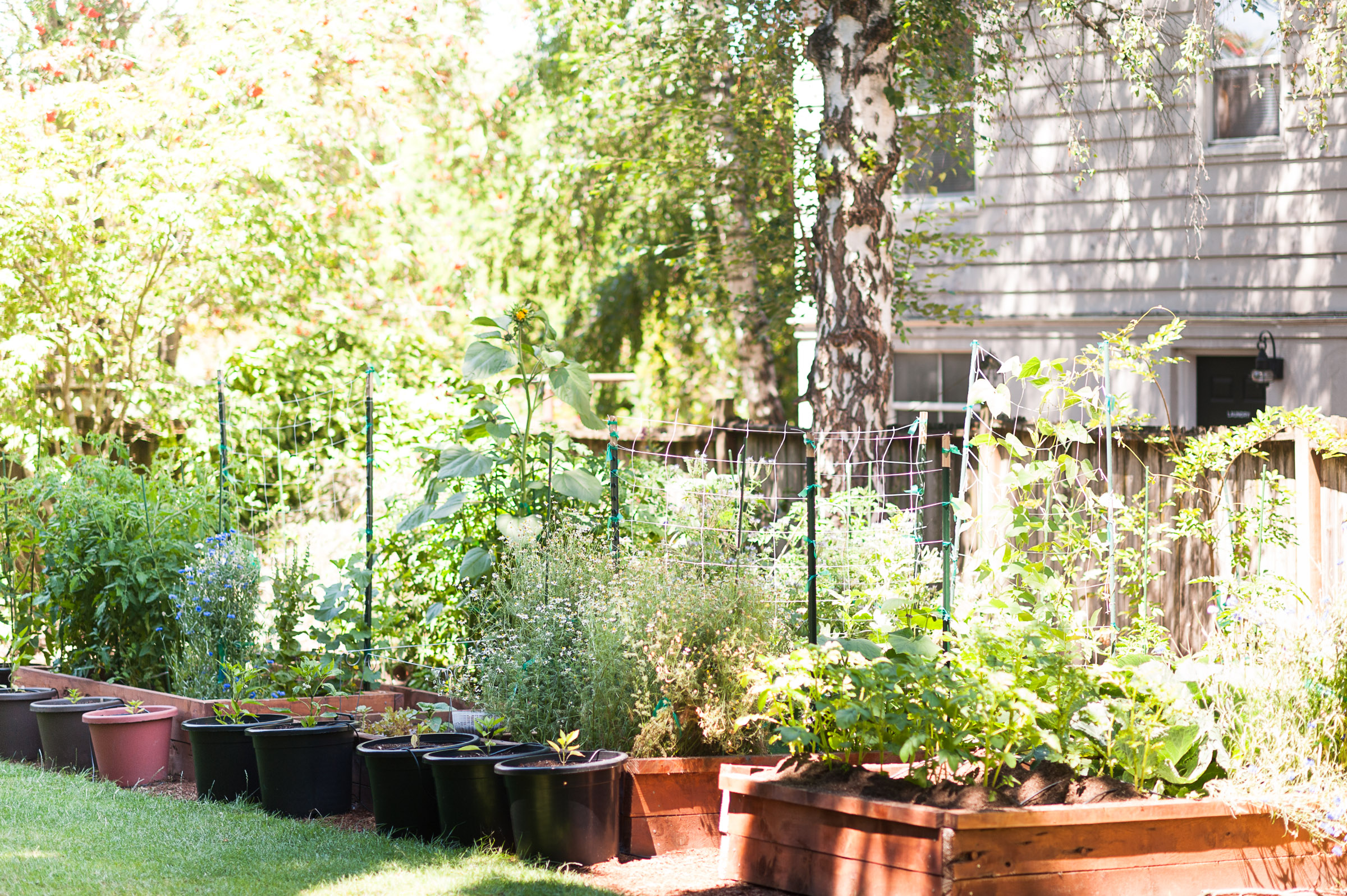 On the success and failure spectrum: swiss chard and eggplant. I’ve been babying the eggplant for months...covering it, removing slugs and pill bugs, and finally...finally, there was a bit of reward a week ago. Two plants have their first flowers. If we’re lucky, we’ll have a few eggplant by late August. The swiss chard remains one of this year’s garden mysteries – it refused to grow for the longest time, and then when it started growing, it seemed to decide it hated the sun and is now covered in sun scald. I’m chalking this up to a varietal-geography mishmash and plan to try again next year with a different variety and in a bed instead of a pot. Most of my peppers, despite amazing germination, aren’t doing great either – in this case, it’s less about the peppers and more about the wretched squirrel community that lives in and around our yard. The squirrels seemed to specifically target the pepper plants’ pots as the perfect place to stash their hazelnuts, and after the peppers had their roots repeatedly dug up, many of them are the exact same size they were when I planted them! 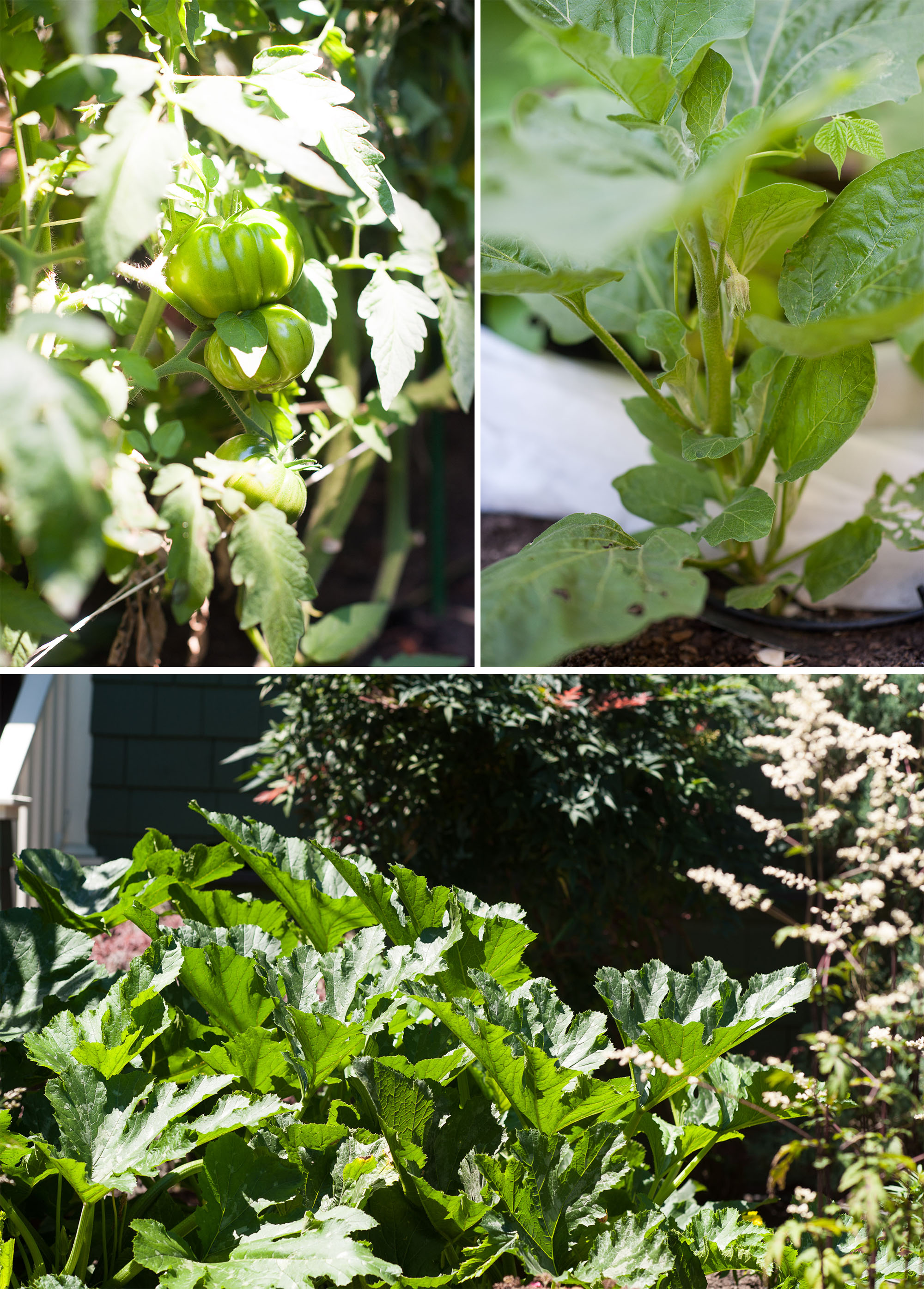 Justin and I are always smiling when we pull in or out of our driveway – which is different from other months of the year, where all we can see is weeds to pull, things to stake, plants that aren’t working. July and August are what gardeners dream about in January, as we buy seeds and draw garden maps. Our front perennial bed is full of color and verticality. Everything is spilling into each other in its lushness, and those less than stellar plants are effectively hidden by everything that seems to be outcompeting each other. 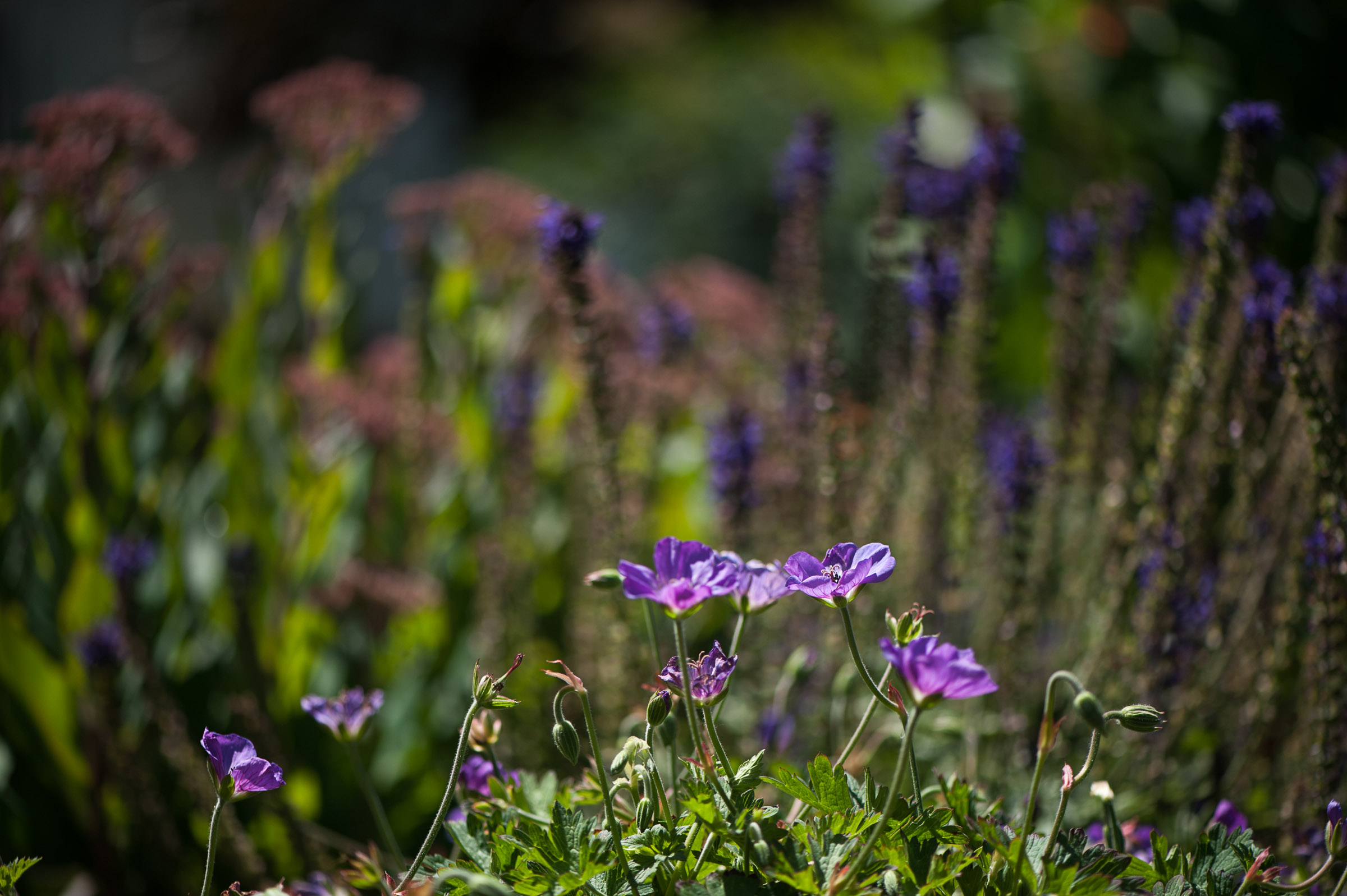 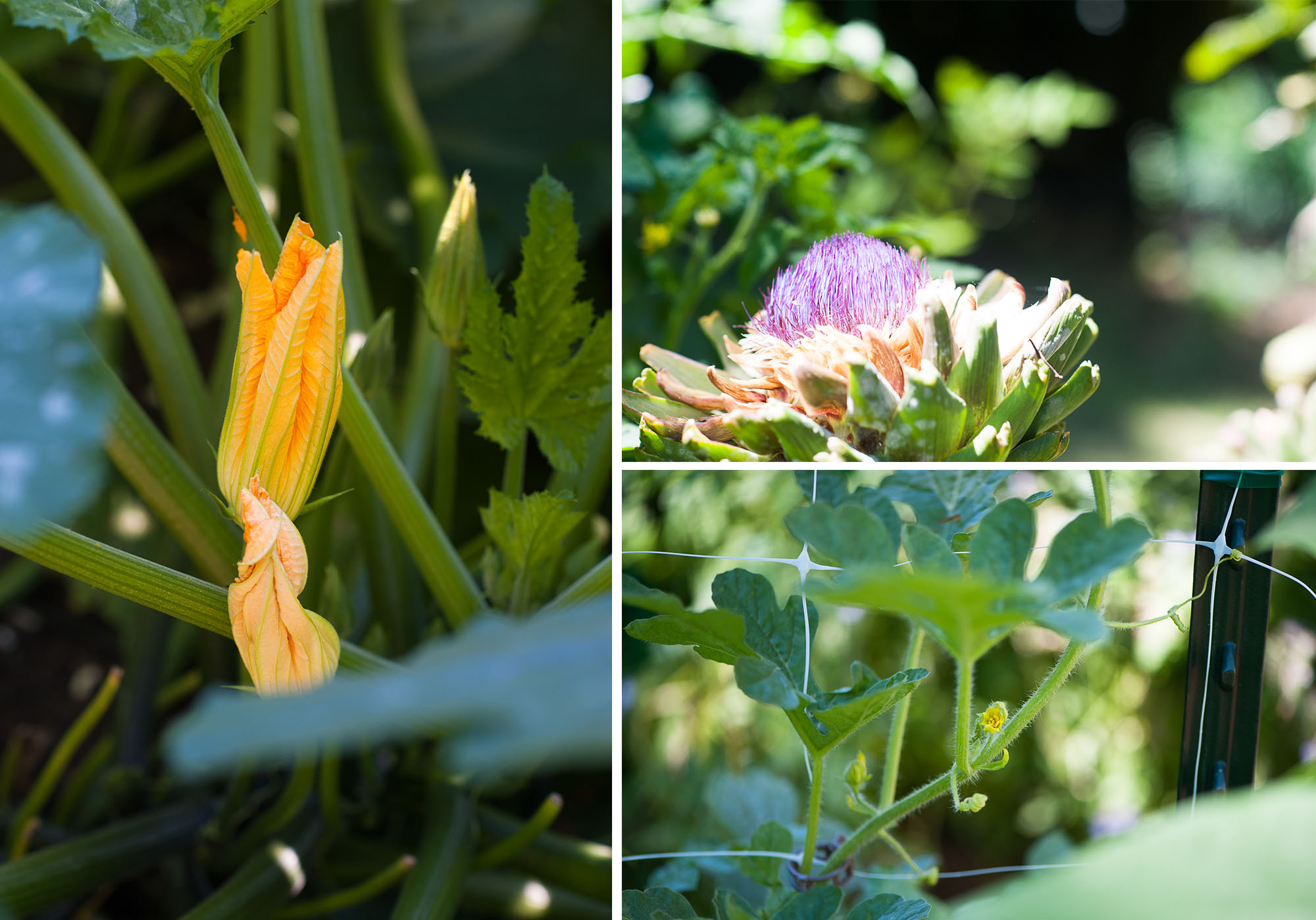 Normally, when Fall firmly settles onto our yard – leaves everywhere, dead flowers, continual compost and discarding of debris – the garden becomes a much sadder space. I have hopes that this year, it won’t have to feel that way, because even if I must tuck vegetables under row cover or plastic, beneath this barrier will reside lettuces and carrots and leafy greens...almost like a secret garden tucked away from the brown. 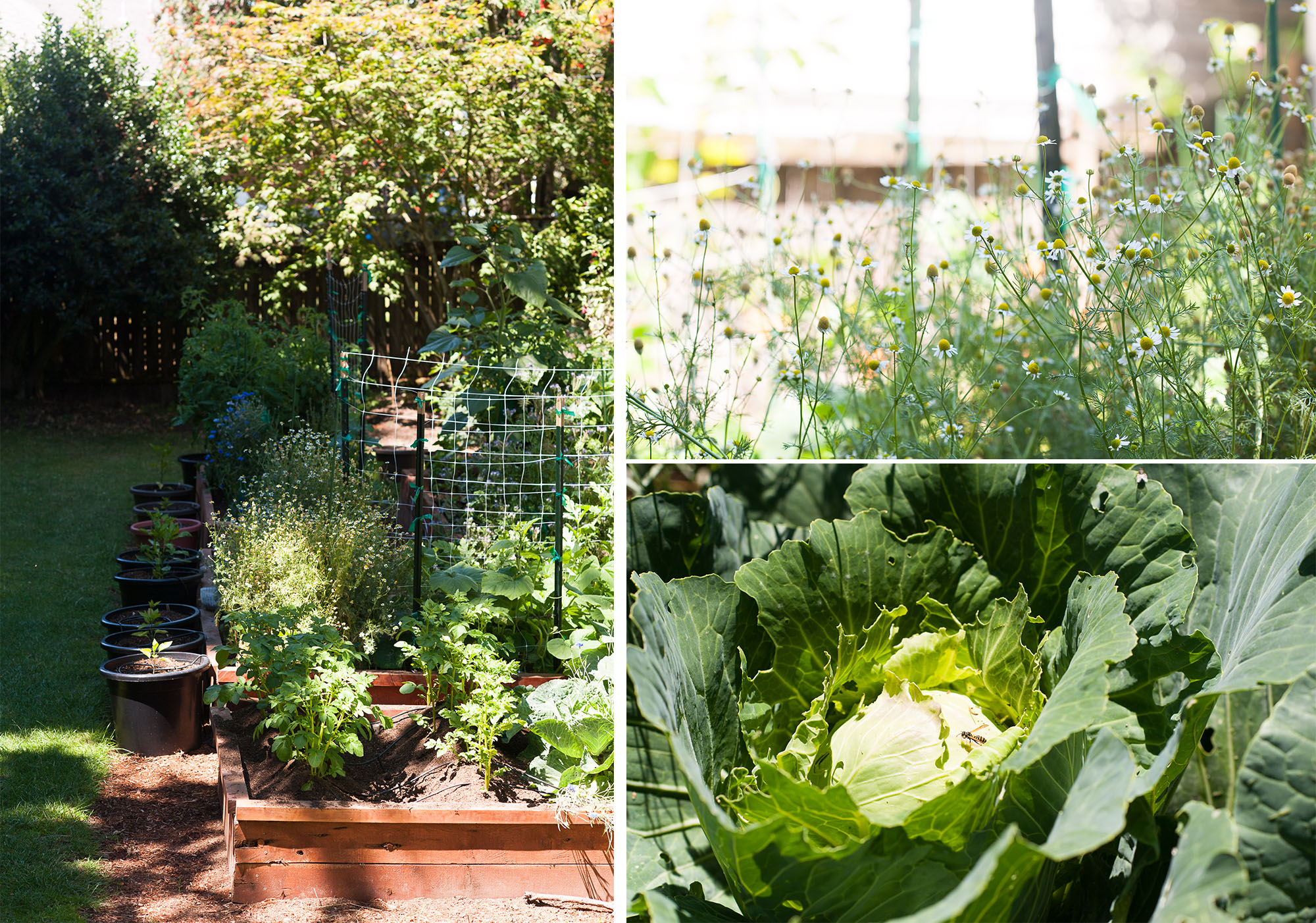