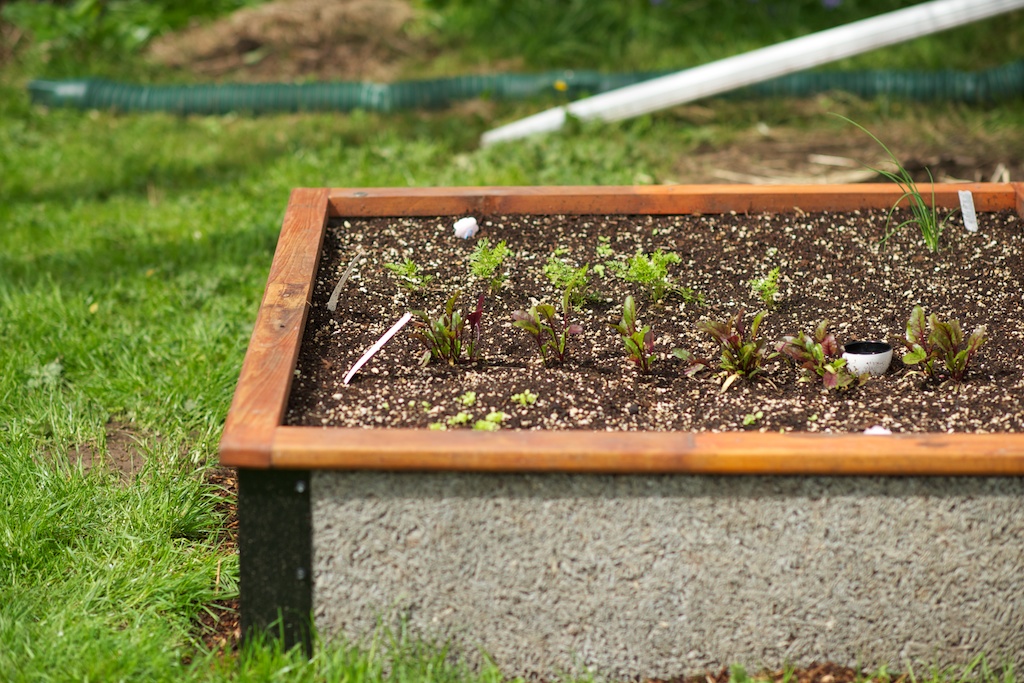 The last time I wrote about gardening and general backyard maintenance, I was still cleaning things up and progress inched along. I had cleared away the old leaves, used the mower a few times, and began sprucing up the flower beds. I also had my first of many encounters with slugs...and the neighbor's cat.

When I was reviewing my garden notes between then and now, I'm shocked at the amount of change that's happened in the last month. I'm glad I have this notebook (a little green notebook entitled "Gardeners I Met and Liked") to remind me of the steps we've taken to transform the backyard from an overgrown dandelion and spiter-mite haven, to an area home to flowers, herbs, vegetable starts, and a couple funky Adirondack chairs. 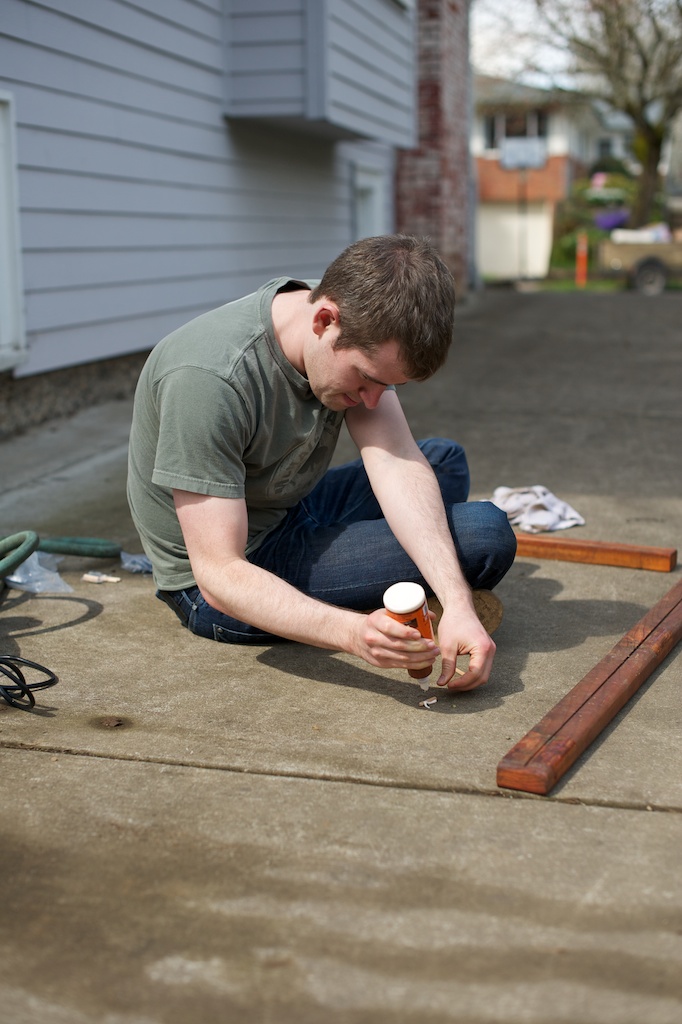 Before installing the raised bed, I organized an edible garden plan, mapping out what I wanted to grow, when to grow it, and what grew well together.

In containers with eastern light:

In the raised bed, for its first planting, with southern light:

a variety of salad greens, another chive plant, beets, carrots, cippolini onions, (and since these pictures were taken, rainbow chard) 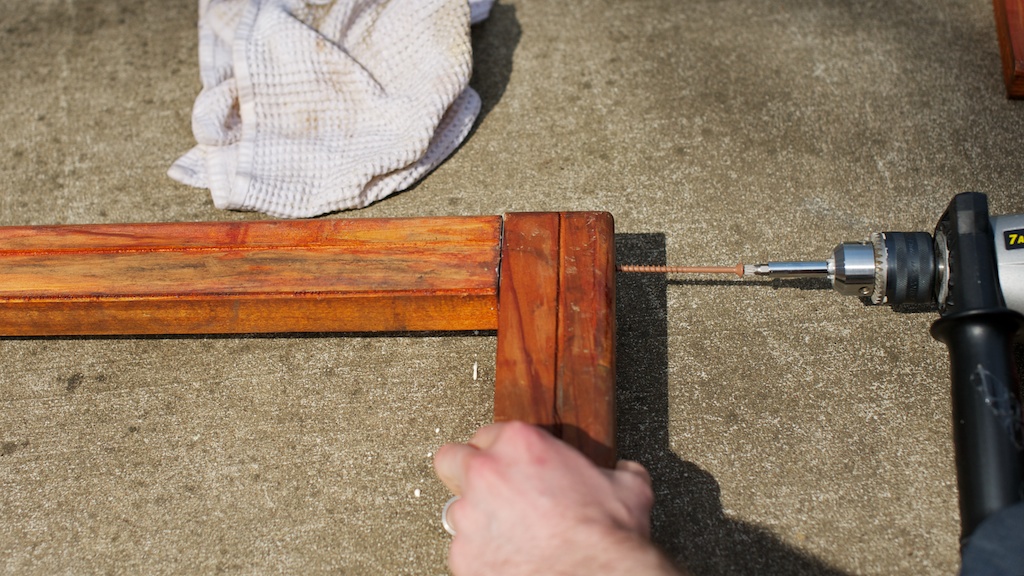 After debating the exact location for the future raised bed, I decided to take advantage of a 'mystery' dirt patch located near the back of the house (it receives some pretty glorious south facing light). This area had been covered up by a large wooden board, and I had no insight as to what the board was or what happening underneath it. When I moved the board, I discovered what I can only assume are the remnants of a former garden (raised bed or not, I don't know). There were little sprouts, old roots, and a number of weeds. And when I dug into the soil, the resulting unearthed dirt was both moister and richer-looking than the neighboring clay-like soil. (or soil-like clay?!)

I'd considered making my own raised bed, using a This Old House tutorial, but ultimately decided I didn't want to buy a tablesaw (and a work table) if there was an attractive alternative. I discovered a pre-fab 4x4 raised bed kit at Urban Farm Store, one of the constants in my Portland gardening adventures. We always arrive at the store in a different vehicle. I've driven a Zipcar Mazda, a Zipcar Honda, and most recently a Car2Go Smart Car. I'm amused by how much you can fit into a little Smart Car, if you're willing to sacrifice comfort. 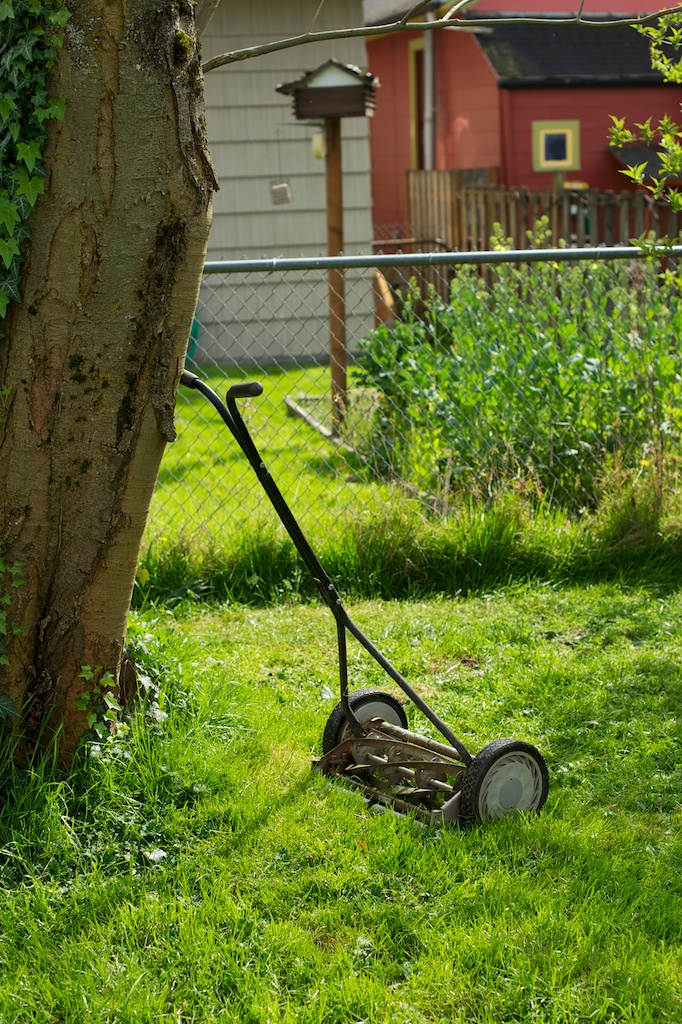 The visit we decided to buy the raised bed kit happened to be the same visit we drove the Smartcar. Pre-fab, in this case, really only meant that everything had been cut to size. This meant four four-foot boards, as well as four concrete-type sides. On that same visit, we also bought a bale of hay, more potting soil, an extra shovel, and a few more plants. I'm beginning to think we should be an advertisement for the versatility of car-sharing!

Putting together the raised bed felt like assembling Ikea furniture, only we were staring at the haphazard directions while sitting on the driveway instead of the living room rug. The mechanics of putting together a 4x4 box aren't challenging--the challenging part stemmed from the fact that the holes weren't drilled evenly or all the way. We finally gave up on the power drill, made a quick Fred Meyer run, and returned with a socket wrench. After moving the raised bed into position, we filled the bed with dirt and the leftover compost we had. This barely made a dent in the bed, filling it 2 inches at most. Using the ever-handy Car2Go, the next day, Justin drove to Fred Meyer (yes, we go there..a lot), returning with a smartcar full of compost and potting soil--8 bags to be exact. From there, we filled, tilled, and smoothed the container. 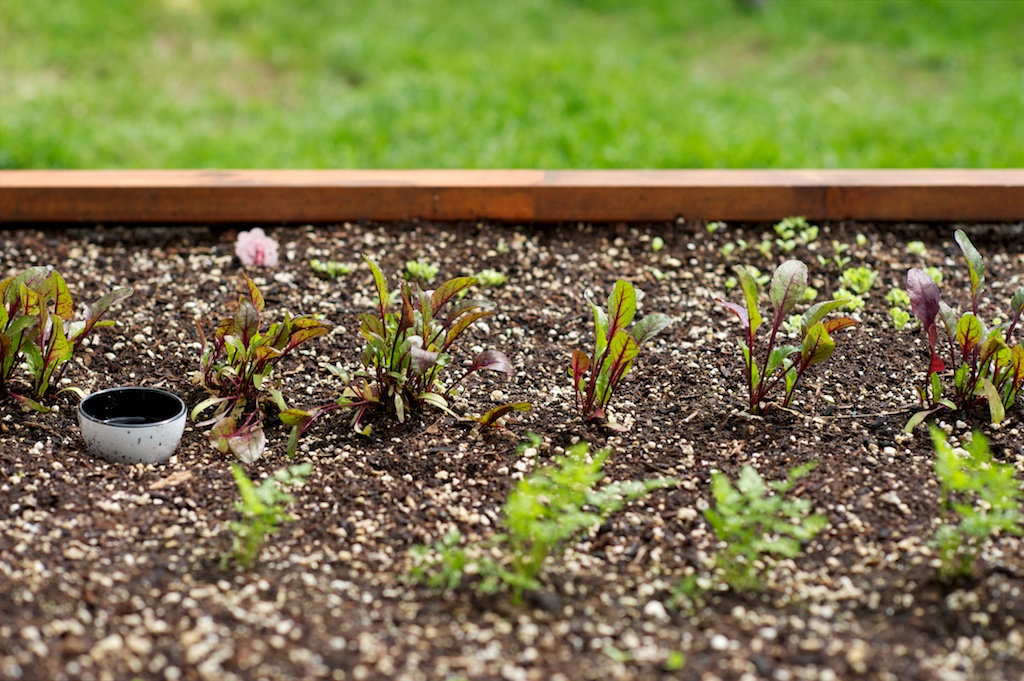 That weekend got away from us, and 11 pm on Sunday night was the only time to plant the vegetable starts (most of which I'd purchased at the farmers' market a week before). So after consulting my gardening books on proper spacing, and in a slight drizzle, with Justin holding a flashlight, I planted them. And despite their dry and compacted roots, in the 3 weeks since, the plants are growing rapidly. At the time, I didn't have a watering can with a delicate enough stream, so I ran inside and filled up our Hario Buono Kettle!

These last few weeks I've excitedly watched as direct sown lettuce and onion seeds have sprouted up. Slugs remain an ongoing problem. In my container garden, my parsley was nearly decimated by the slimy things. (Strange because parsley is frequently heralded as a plant pests aren't attracted to). I picked off 6 slugs (gross!) and the plant is slowly returning to a healthy state, complete with a tiny ramekin of beer. I want to maintain a completely organic garden, and have researched different methods to combat pests, mystery or obvious. Bite marks appeared in a sunflower I planted out back, as well as on the newly planted chard. I narrowed the culprit down to aphids or spider-mites, so every now and then I spray a hot pepper mixture on the plants. 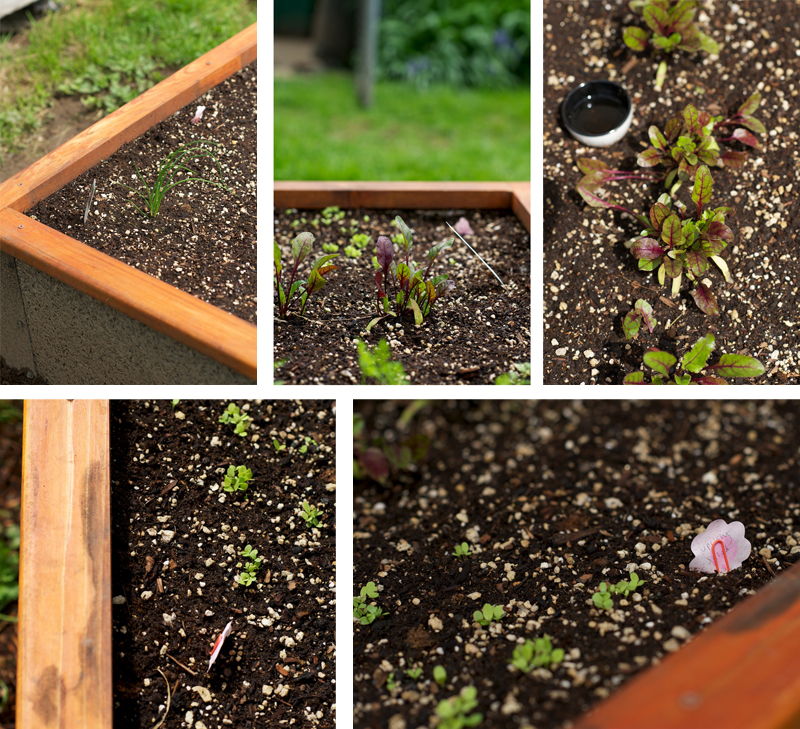 I knew that ladybugs were beneficial to a garden, and quickly learned that they love to eat aphids. After planting several marigolds (a good home for ladybugs), I bought a bag of live ladybugs (Ladies in Red, as they were called), with apparently 1,000 in the bag. We had to wait until night to sprinkle them in the yard (if you release them during the day, they'll just fly away), so once again I found myself in a light drizzle, lit only by Justin's flashlight, this time sprinkling ladybugs around our backyard at 11 pm. Unfortunately, I fear that at least half of the ladybugs were dead or nearly dead when we released them. On a more positive note, I do see some ladybugs crawling around, and the holes on the backyard plants are much less frequent.

There's been an equal amount of activity in the frontyard, of the flower, not edible, variety. I'll share some pictures in a future post. 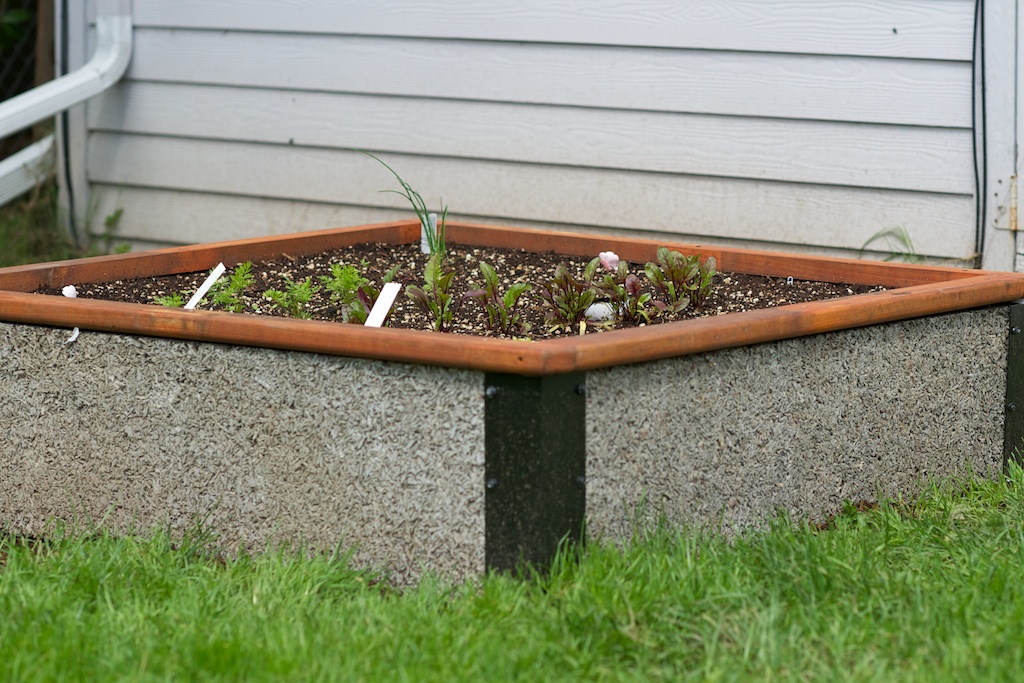