Fiddleheads are the unfurled fronds of an ostrich fern, their name derived from their close resemblance to the musical instrument.  Like pea shoots and ramps, fiddleheads are another spring treat, only appearing in early May.  Once the shoots open and begin to grow, the fiddlehead is rendered inedible due to the concentration of toxins. 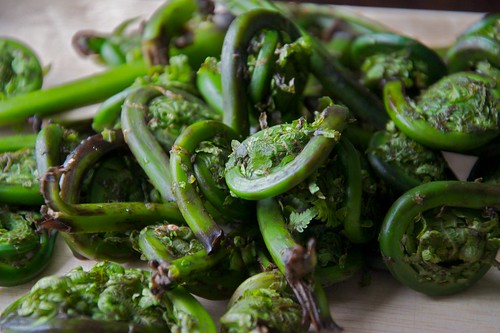 Fresh fiddleheads must be stored with care; if you store them, wrap them loosely in plastic and keep them in your refrigerator for no longer than 10 days.  Each day you store them means a sacrifice in flavor and freshness.

When you prepare fiddleheads (and you must always cook them!), lightly wash them to remove any dirt.  Cut off the stem that extends from the coiled part.  In planning a meal around the fiddleheads, we assumed that they would be perfect in a stir fry, as fiddleheads are popular in Asian cuisine.

They taste similar to fresh asparagus, though earthier and nuttier.  The fiddleheads responded well to the other elements of this stir fry, absorbing the soy and ginger.  Beyond the ease of preparation, their appearance is unique and different.  Both the aesthetics and flavor of the stir fry were positively enhanced by the fiddleheads' addition. 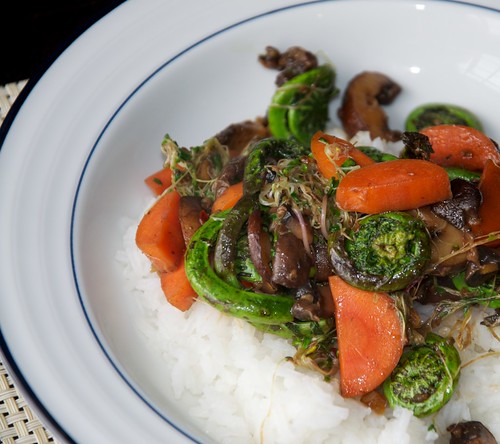 white rice (amount is your preference)

Put a pot of rice on to boil.

Finally, add the soy sauce and fish sauce.  Season with black pepper and a dash of red pepper flakes.  Spoon on top of cooked rice.  Add the bean sprouts on top.  Enjoy!