If you walked into my kitchen one afternoon, the winter light reflecting off of cabinets and counters like a blue-ish laser beam, and saw this cake sitting on one of those counters, delicate and decadent, you might feel your shock crowding out your hunger. Cake in January?? Cake in January!!

The mixed reaction is understandable: most of us have just closed the door on a season of indulgences (some of us never do – we just work out more), and if so, seeing a chocolate cake with camellia-pink frosting is just cruel. But this cake, in addition to the standard doses of flour, sugar, and butter, also contains four roasted beets and a bunch of kale leaves. 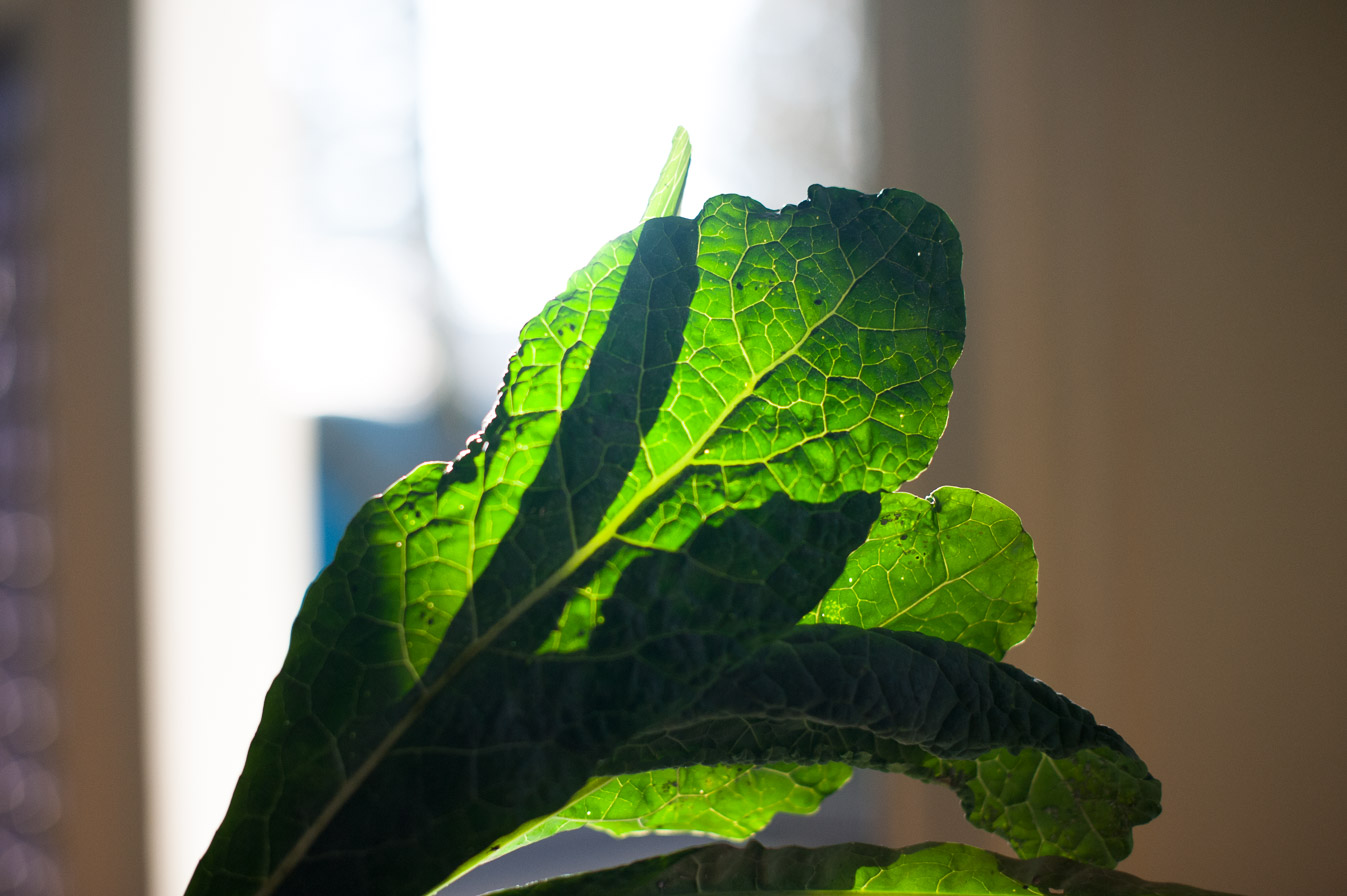 I’m a believer in whole foods and creativity-fueled seasonal eating, but I’m also a believer in baked goods. I love the process of first measuring, stirring, and whisking before then putting a raw batch of something in the oven, waiting the requisite 20 minutes or an hour as the warmth and scent fills your home and nostrils, and then feeding another sense: your tastebuds. I’m not interested in giving that up, especially because so much of my baking revolves around seasonal fruit. But I also never want to experience a sugar crash like the one my husband and I had on January 4th.

The day before, my birthday, we picked up a slice of Palace cake, a sinfully tasty coconut concoction. Later that night, we went out for dinner, and the tasting menu contained desserts, one of which I felt powerless to stop eating – it was their take on a Reese’s Cup. The next day, I felt agitated and jittery, and it wasn’t because I was a year older. Finally, in the afternoon, my husband landed firmly on the problem (and the solution): the massive slice of cake and the 10 pm desserts forced our bodies into an amazing high before crashing into an anger-inducing sugar withdrawal. (The solution? To bake something else. In fact, as soon as I suggested baking my favorite chocolate cookies, our moods improved noticeably. This is the definition of additive behavior, and it’s worrisome.) 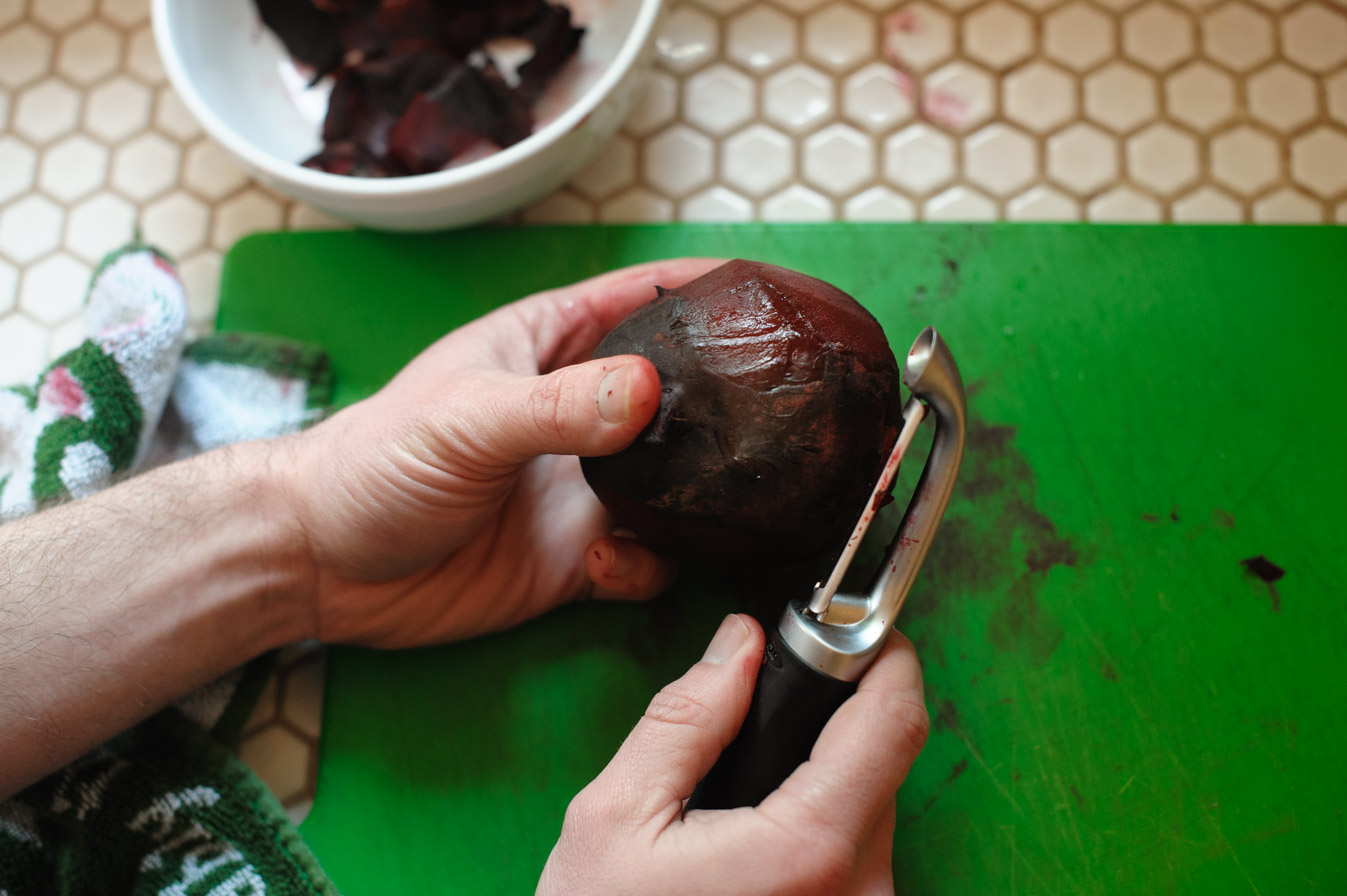 Instead of those chocolate cookies, I should have baked this cake. In the Winter issue of Edible Boston, recipe editor Sarah Blackburn details her inspiration for creating a cake like this: her picky kid, with a limited palate that seems to crave rice, pizza, and pasta exclusively, recently began drinking green smoothies for breakfast, lessening her anxiety about the nutritional composition of the food he enjoys. This success with daily green smoothies made her pause and reconsider the ingredient composition of one of the foods her son is decidedly not picky about: chocolate cake. Blackburn is not advocating for daily chocolate cake – what a concept! – but rather, wanted to see if the smoothie idea was equally applicable to a cake: could she create a cake that was crave-ably delicious, with a smattering of whole foods tucked carefully inside? 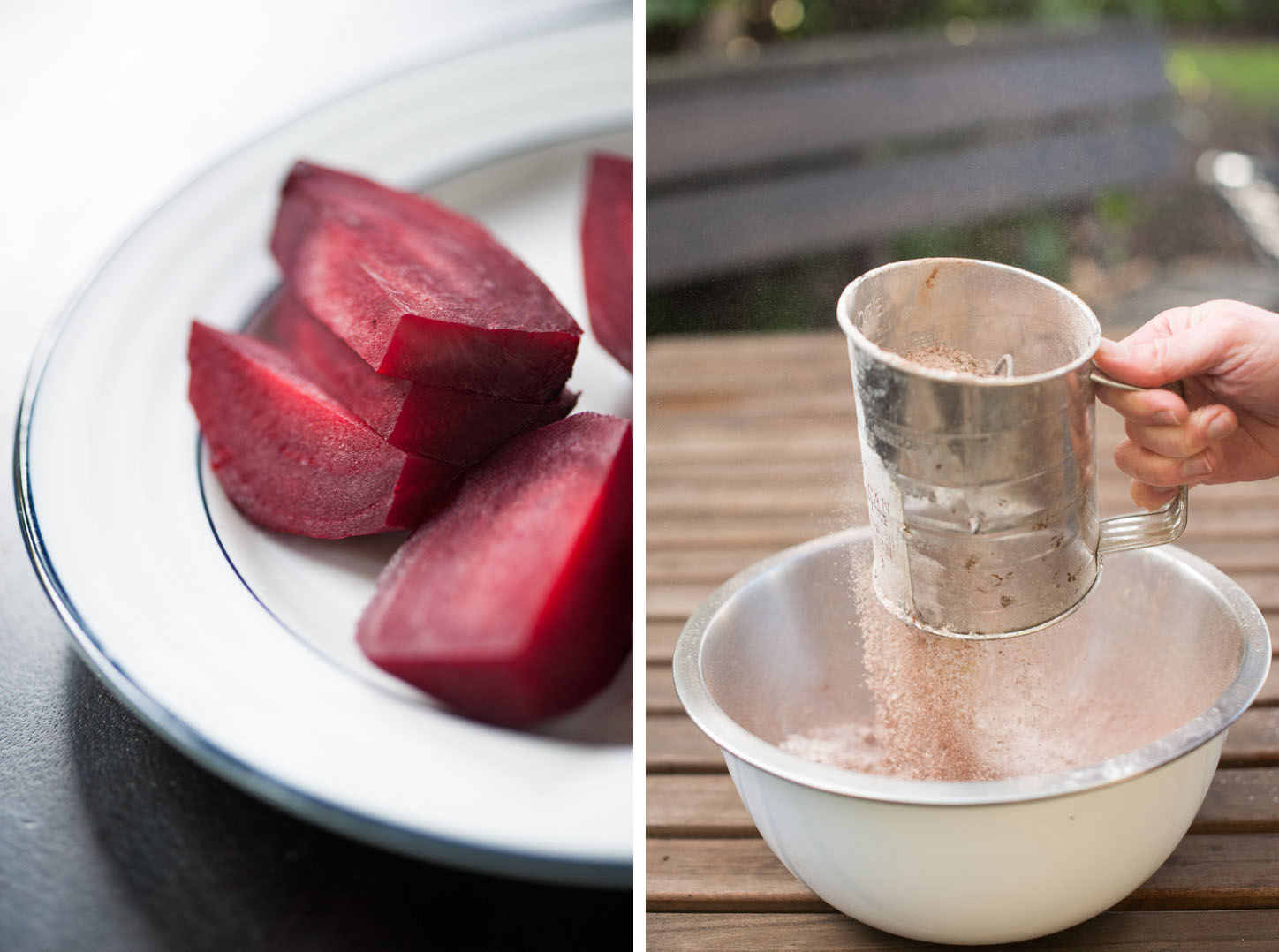 Her son loved the cake, and despite his not-yet-developed palate, I’m sure that he recognized that it tasted decidedly different from other chocolate cakes: denser, moister, more vegetal, yet just as chocolatey. Perhaps this was why Blackburn writes that her son wanted it in his lunchbox the next day.

I had beets for dinner and an escarole soup for lunch, and I’m not a picky eater (though, sure, if you’re going out for pizza, I’ll join nearly every time). Then what is the allure of a beet chocolate cake when I could eat a chocolate-chocolate cake and get my beets in other dishes? This cake fills my baking desires: along with measuring, whisking, and smoothing frosting (a personal favorite baking task), I created a delicious dessert that’s much more substantial and filling than it initially appears. This cake is not a substitute for your daily vegetables, nor should you want it to be (but that’s an entirely different discussion about vegetables – how when cooked with butter, salt, and spices, they beg for the starring role, not a secretive, understudy position). 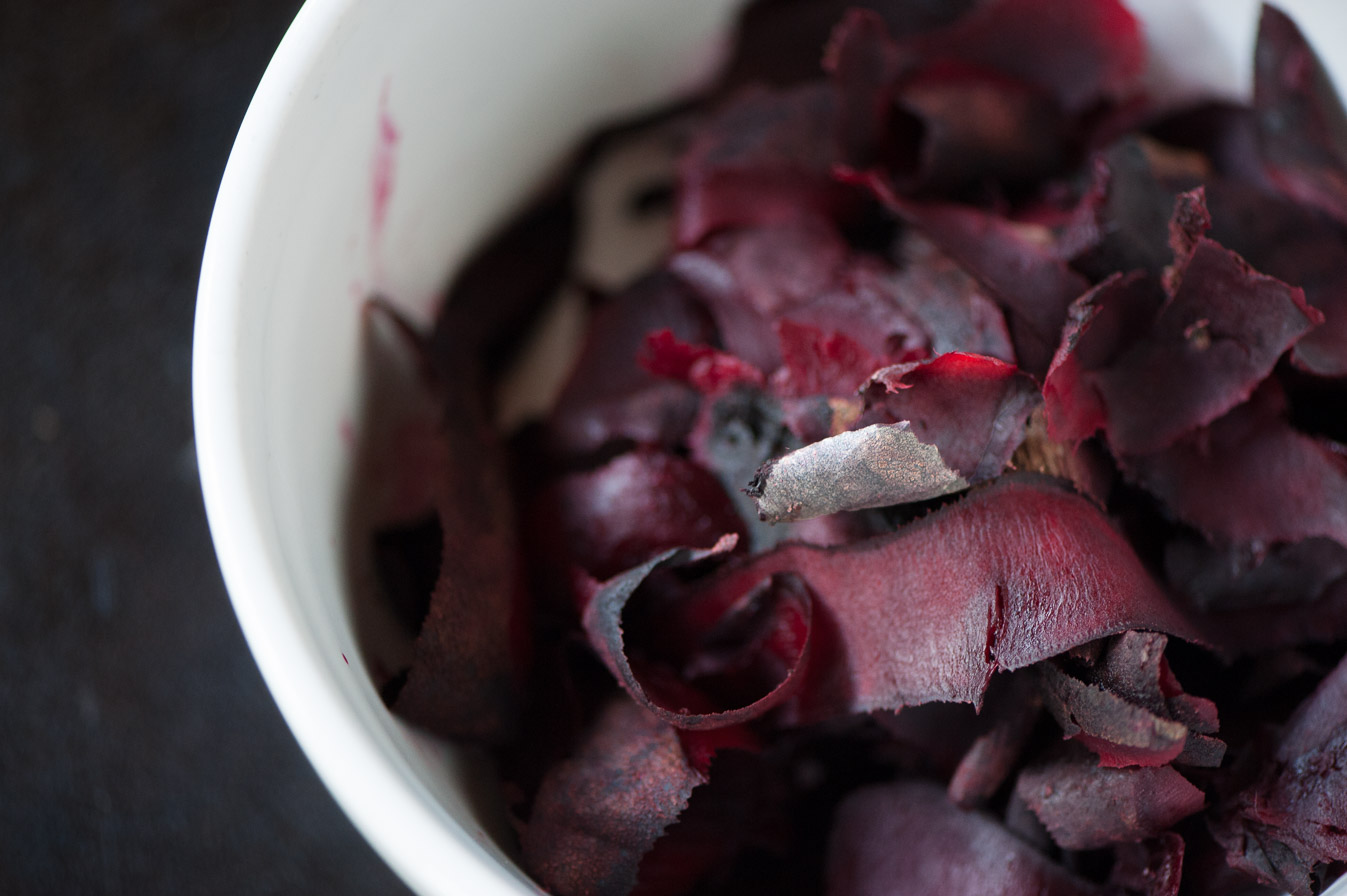 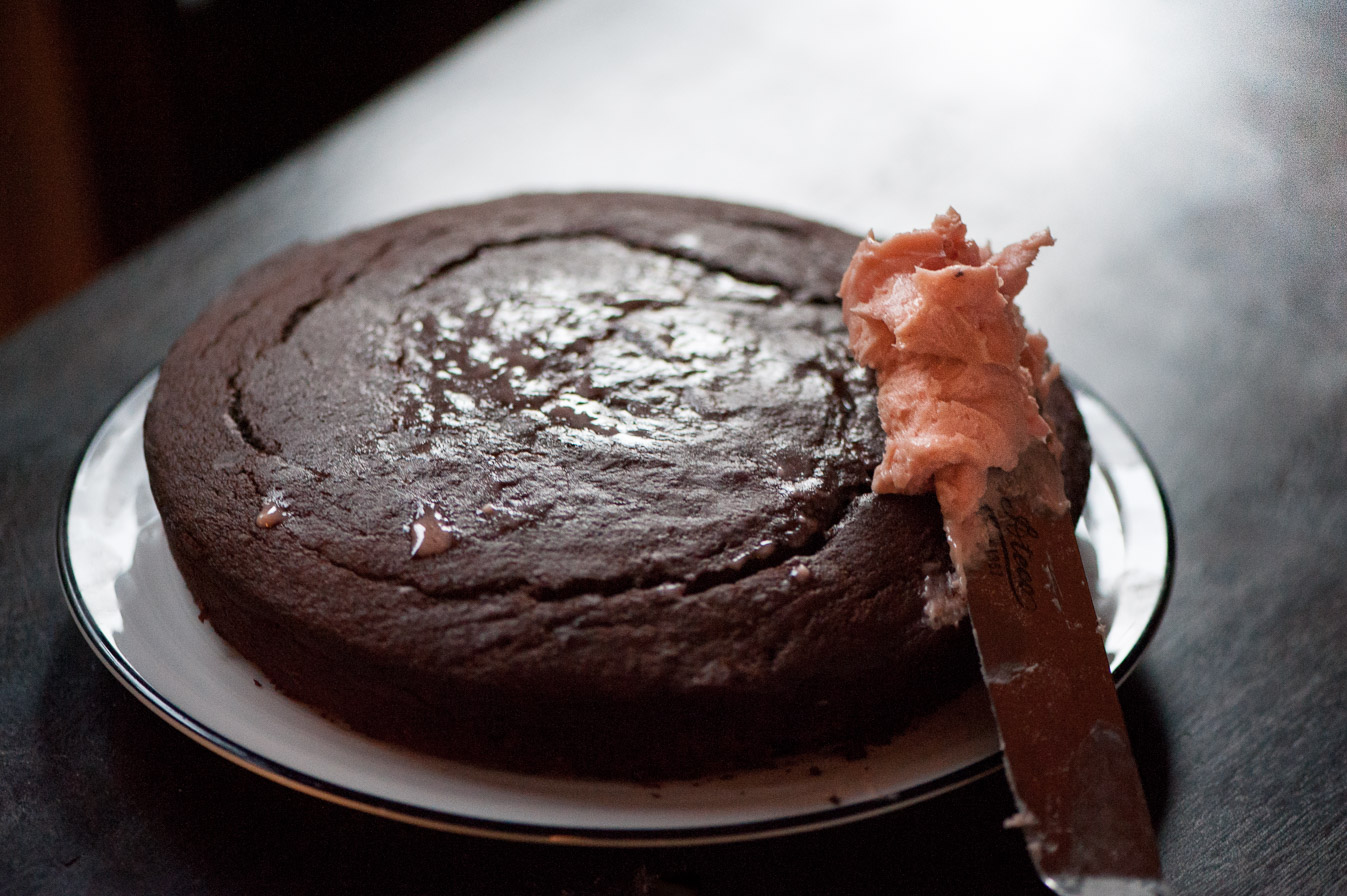 But our bodies might be less susceptible to cranky sugar crashes, and less desirous of cookies as medicine, if this kind of baking began to become a permanent substitute for white-flour-centric baking. As I stare at my empty cake plate, the fork resting over a few stray crumbs, I’m not tempted to go get another slice. I’m too full and satisfied. When’s the last time that happened with another baked good? 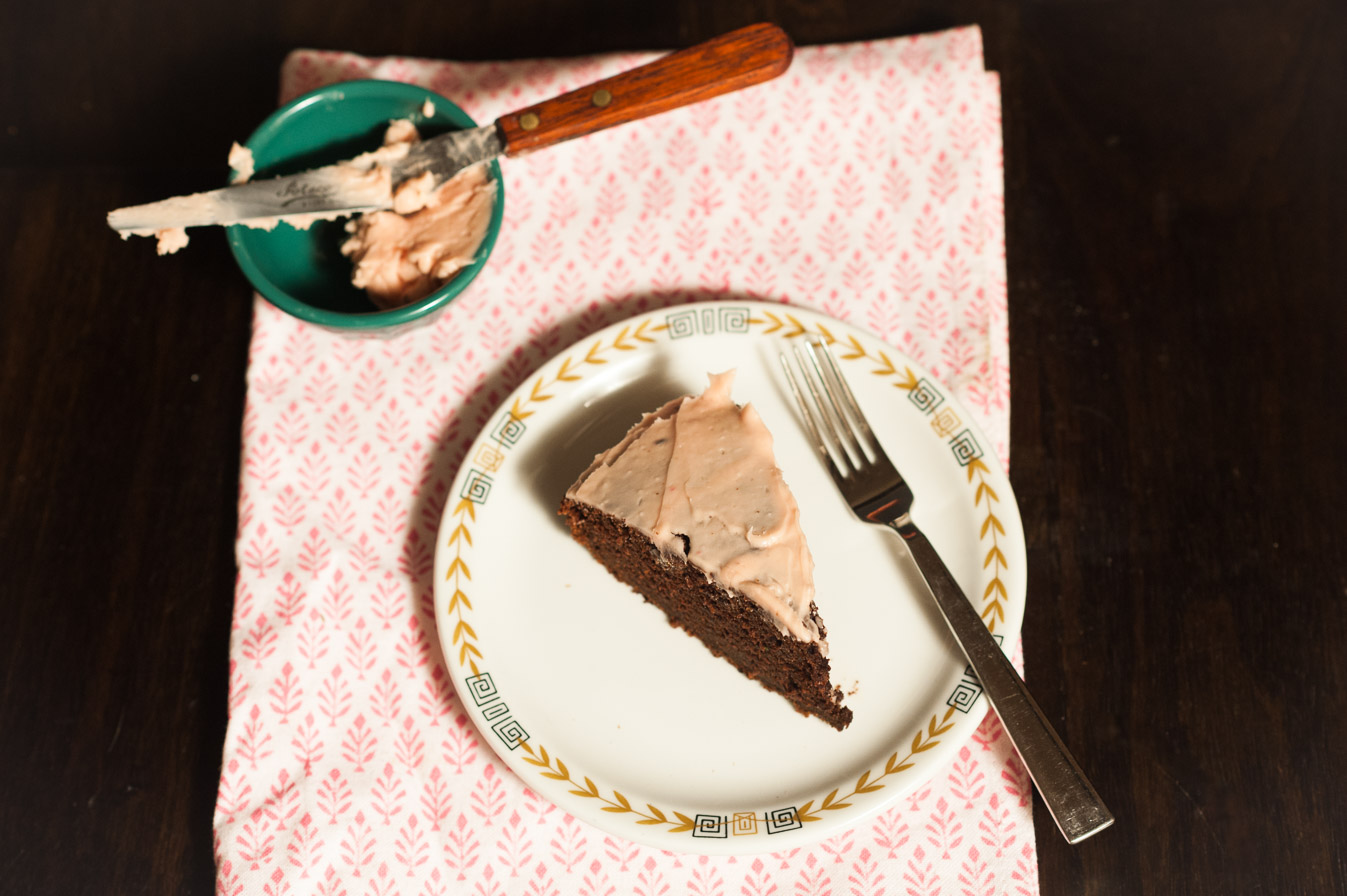 Makes one cake (feeding about 10 people)