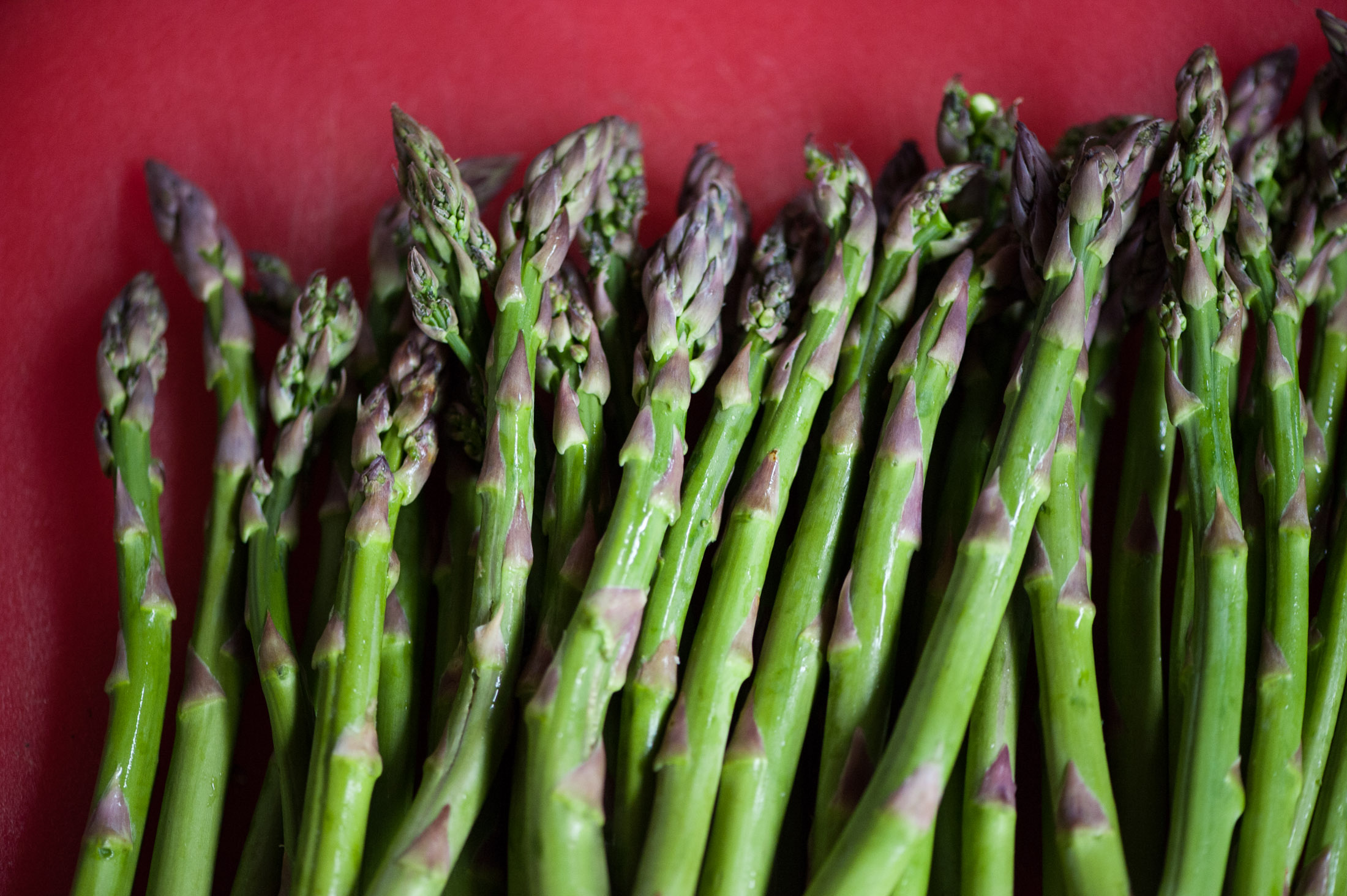 Deborah Madison has been an unquestioned member of my kitchen for over four years now. When my husband and I moved to Brooklyn in late 2009, we were recently married. I was shaking off an abandoned career track and instead turning towards freshly discovered interests and passions. At that point, I could claim less than a year of serious home cooking knowledge, and many sub-par meals to show for it. I was only beginning to grasp at the concepts of seasonal eating, how food was grown, and even what certain ingredients were. (I remember seeing celeriac for the first time at the Union Square Greenmarket and being shocked and intimidated by its strangeness.) 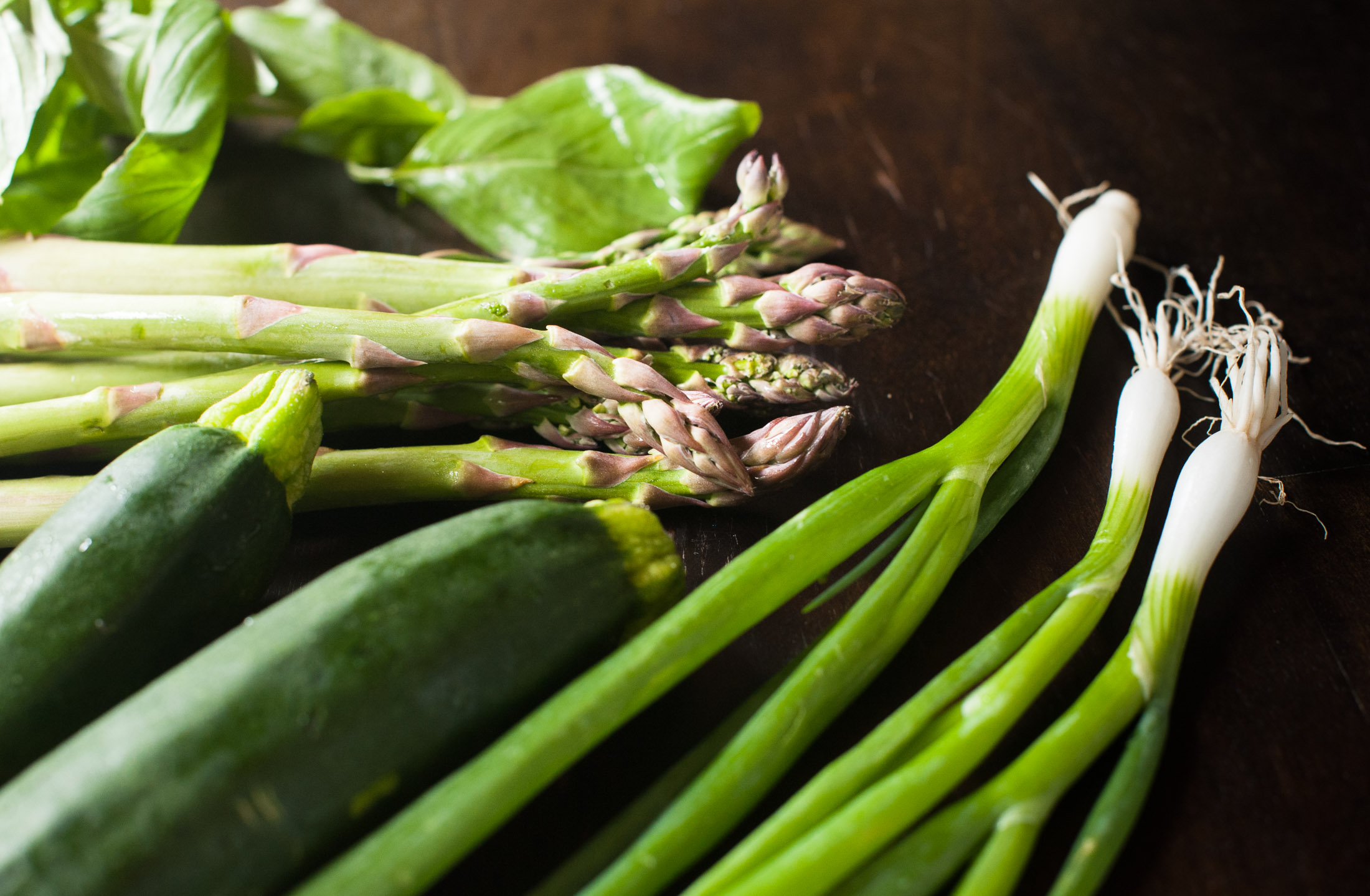 As I began to transition little-used cookbooks out of my kitchen and stock up on new manuals, both informative and inspirational, I soon encountered Madison’s collection of cookbooks at the Union Square Barnes and Noble. I purchased Vegetable Soups that winter and Seasonal Fruit Desserts the following spring, in each case because I was seeking a guide for transforming fresh farmers’ market produce into something nourishing and replicable. I cherished those books in the beginning, constantly turning to them to find a comforting potato and leek soup recipe, or to transform cherries into a clafoutis. 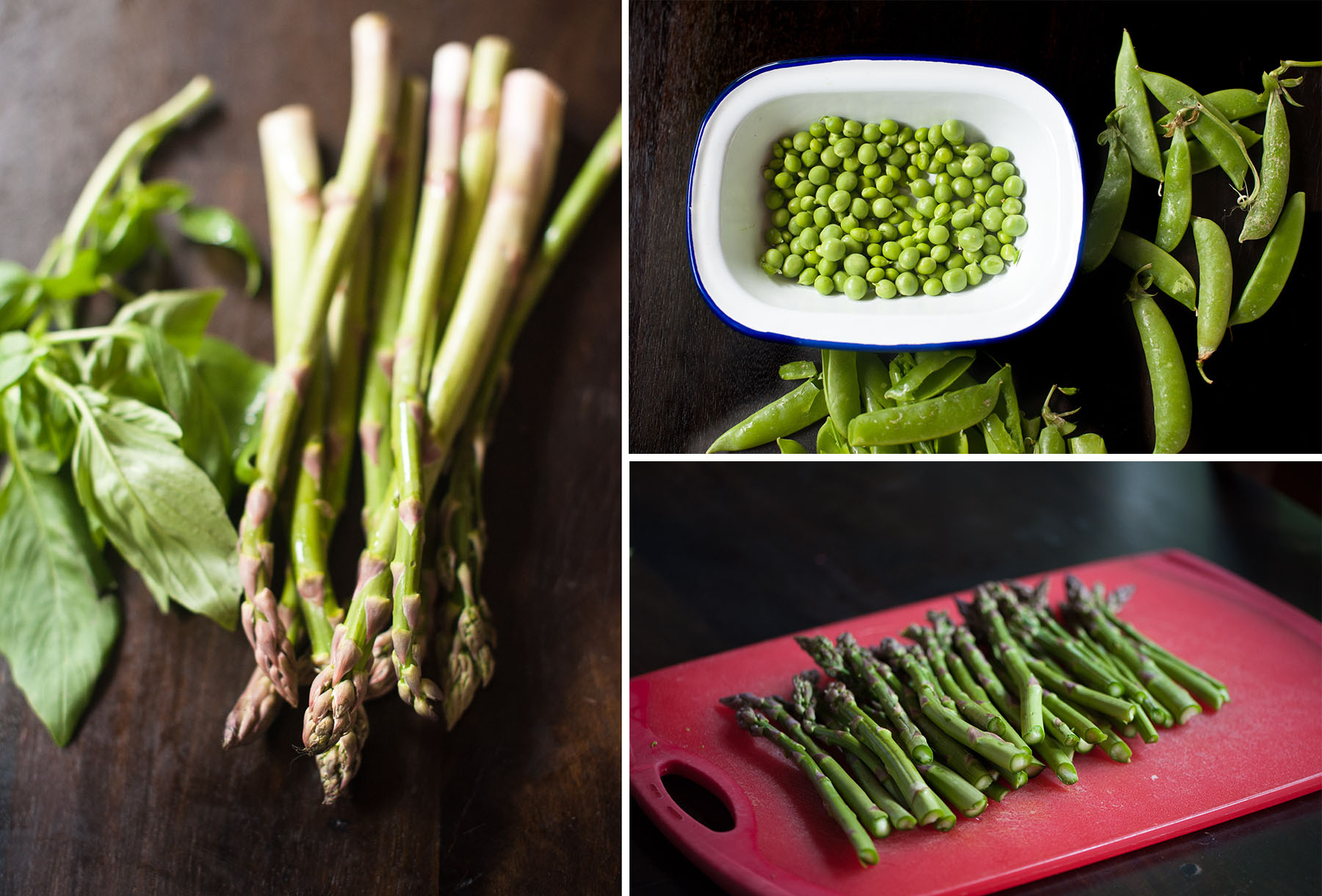 Gradually, I pushed those Madison books further into my cookbook shelf. I’d become more comfortable with basic procedures and flavor combinations, and as such, I set her books aside in favor of brighter, heavily photographed and more complicated cookbooks like Ottolenghi’s Plenty. But I didn’t sell them, inherently knowing that unlike many flashy but frequently disappointing cookbooks that offer enticing photographs with their sub-par recipes, Madison’s more straightforward approach would perpetually have a place in my kitchen. And, about once or twice a year, I continue to return to both the soup and dessert cookbook, seeking simplicity and focused techniques.

A year after our move to Portland, Madison published her most recent cookbook, Vegetable Literacy. In keeping with modern cookbook style, this book was a bit flashy, a joy to both flip through and, as I soon learned, cook from. Vegetable Literacy is organized by plant family: the Carrot Family, the Amaranth Family, the Grass Family (among others). This organization made me slightly uncomfortable at first: I didn’t know how to select recipes in the amaranth family section without a previous basis for the flavors I was meant to elicit. I felt out of my league until I began to cook with more familiar ingredients, producing recipes like an amazing skillet cornbread and a rich, pretty onion tart. Today, Vegetable Literacy remains an indispensable cookbook: it sits front and center on the shelf, while the desserts and soup books reside a few spaces down, not used as much, but oft-consulted.

In an interesting twist, we recently purchased Madison’s republished Vegetarian Cooking for Everyone, originally published in 1997. I hadn’t considered owning it before, assuming that our cookbook collection covered many similar concepts. Yet, I found myself continually flipping through the book when visiting Powell’s; on one of these visits, perhaps inspired by our constant seeking of inspiration for our CSA vegetables and farmers’ market finds, my husband and I impulsively brought it home. I think we were both intrigued by her plethora of stir fry recipes, as well as the entire section solely devoted to gratins (my absolutely favorite hearty meal!). We cooked exclusively from this book for several weeks, and then it too gradually joined the mix with other favorites like Franny’s and Super Natural Everyday. 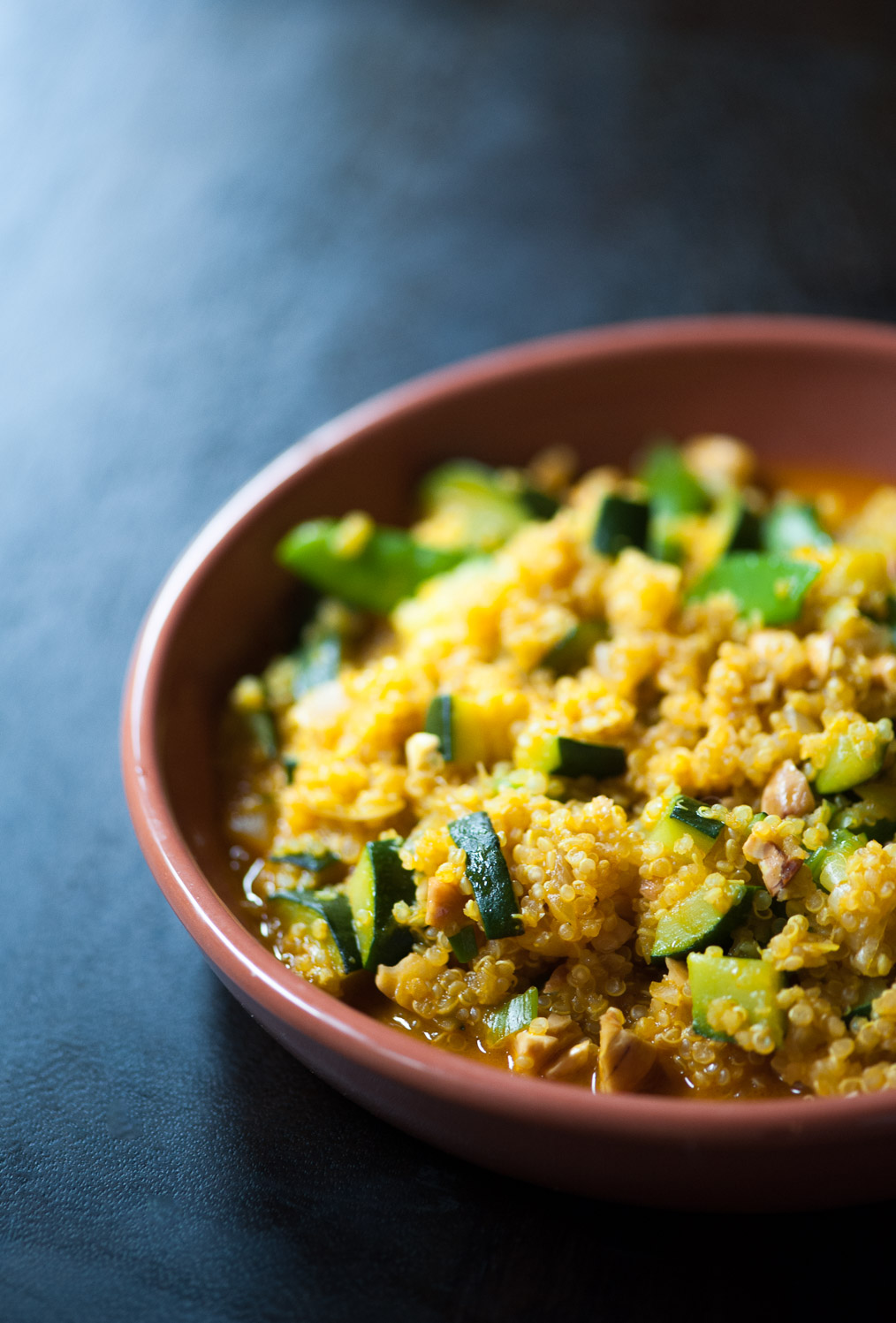 Lucky Peach recently published an honest, intriguing interview with Madison, in which she details her unexpected rise to vegetable “stardom”, and balances the interviewer’s adoration (a feeling shared by countless vegetable-loving home cooks) with a healthy dose of reality. When Madison decided to create a vegetarian cooking manual, it was because she couldn’t find a vegetarian cookbook that didn’t heavily feature nutritional yeast and soy. So, in a project that took seven years to complete, she studied other recipes, including many that featured meat, to deduce flavors and concepts that would translate to vegetarian sides and entrees. As she remarked in the interview, “food should be beautiful, it should be bright, it should call you to it.” 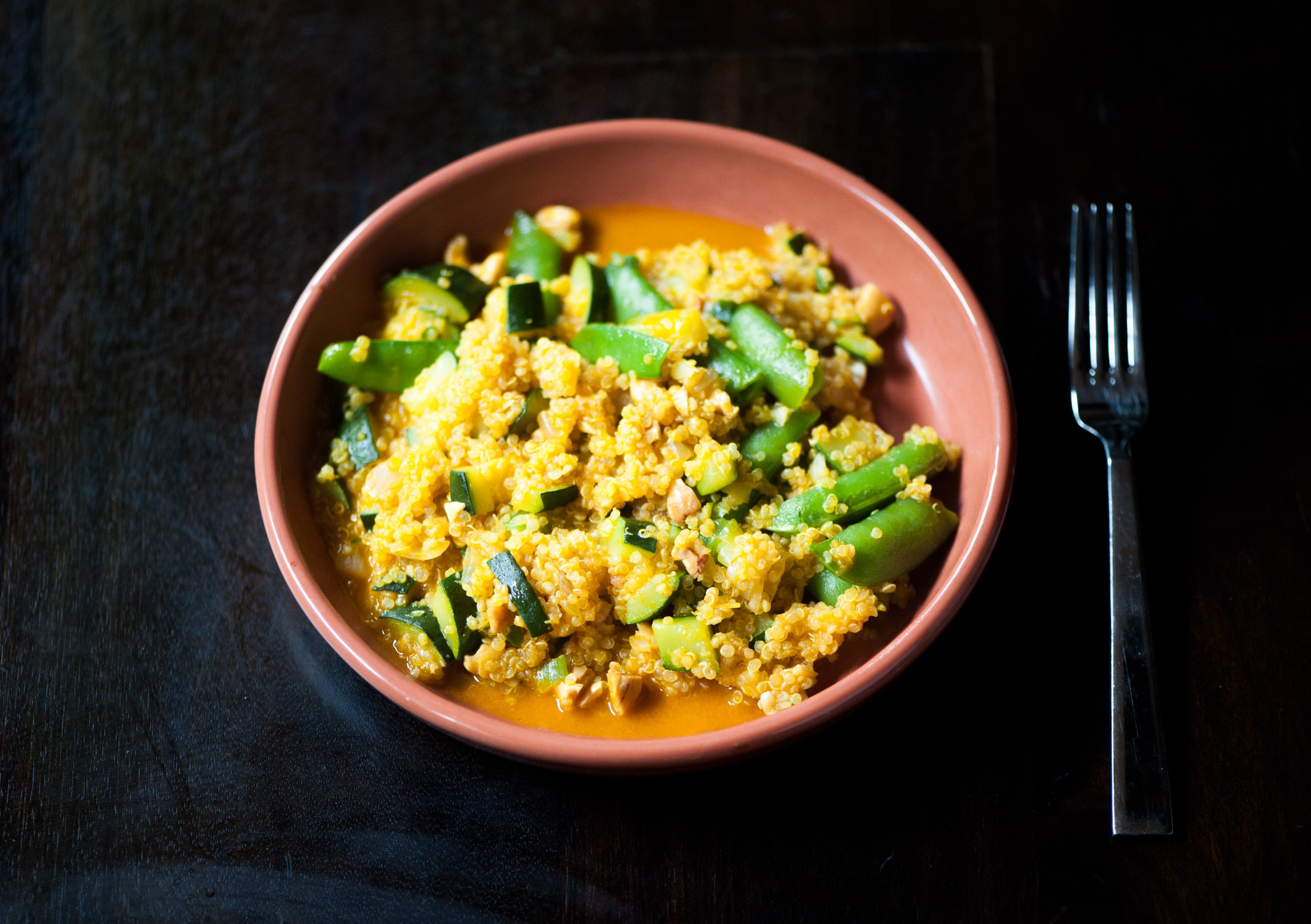 I just read that interview yesterday, and found myself nodding at the word bright. Because, with a few exceptions (like the recipe for braised leeks – don’t bother), all of the recipes we’ve cooked from The New Vegetarian Cooking for Everyone have been noticeably beautiful and frequently bright. Take this quinoa salad. At this point, I’ve cooked a lot of Madison quinoa recipes. But I’ve never cooked a quinoa recipe where the quinoa starts brown and turns orange by the end. The quinoa and vegetables are simmered in carrot juice, and as the juice cooks down, the quinoa becomes even more plump. We couldn’t stop eating it.

I paired the quinoa with Madison’s simple asparagus soup, and though I wasn’t quite as impressed, I still want to share the recipe because of a few lessons. Firstly, we unknowingly purchased bland asparagus (hard to know until you start cooking with it!). Because of the total lack of asparagus flavor, the resulting soup’s flavor was flat. I added cheese, lemon juice, and salt, and gradually the soup became more flavorful, but it never tasted all that much like a spring soup – an asparagus base with a snap of pea and basil. 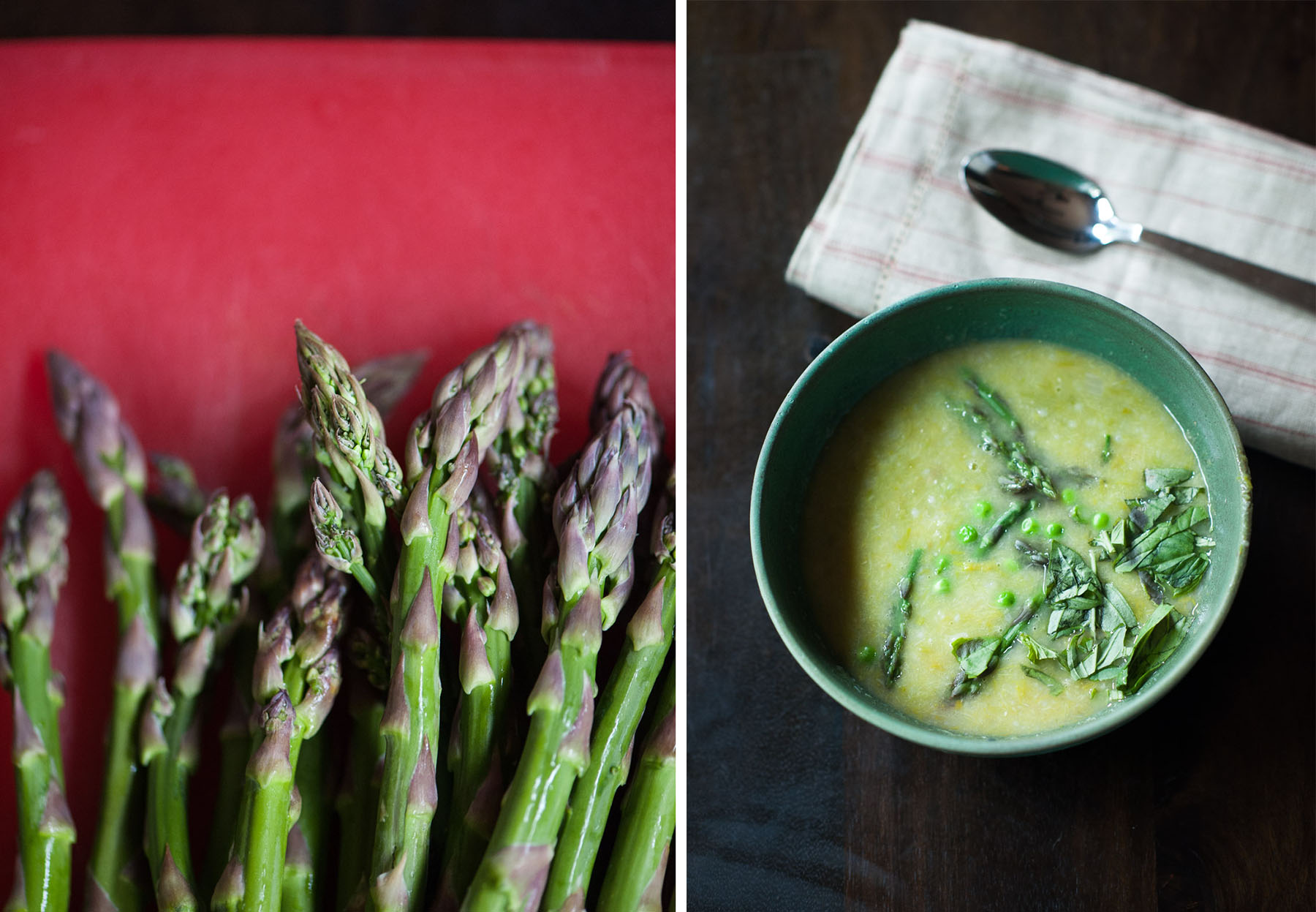 So, drawing from my five years of dedicated home cooking and my collection of cookbooks with their variety of techniques, I know exactly what I’ll do the next time I make this soup: I’ll do it the Franny’s way. Franny’s broccoli and zucchini souprs are two of my favorites, and always elicit excited comments when we serve them to others. They’re prepared in nearly the exact same way: you heat up a layer of olive oil at the bottom of a dutch oven. When the oil is hot, arrange the first batch of vegetable chunks in a single layer. Maintain a high heat and cook until one side is browned. Carefully remove the perfectly caramelized batch of vegetables. From there, you add more olive oil, but leave the brown seared parts that may have fallen off in the bottom of the pot. Repeat until all chunks are browned and then follow a standard soup procedure (onion, garlic, water/stock, simmer, puree).

By searing those vegetables, the essence of broccoli or zucchini is preserved instead of cooked out during the simmering. Each resulting bite is like a smoky concentrated puree of that vegetable. The next time I make this asparagus soup, I’ll be following a similar procedure, and I encourage you to do the same. I think Madison would approve of this transformation from drab to bright.

Curried Quinoa with Peas and Cashews

Asparagus Soup with Peas and Basil