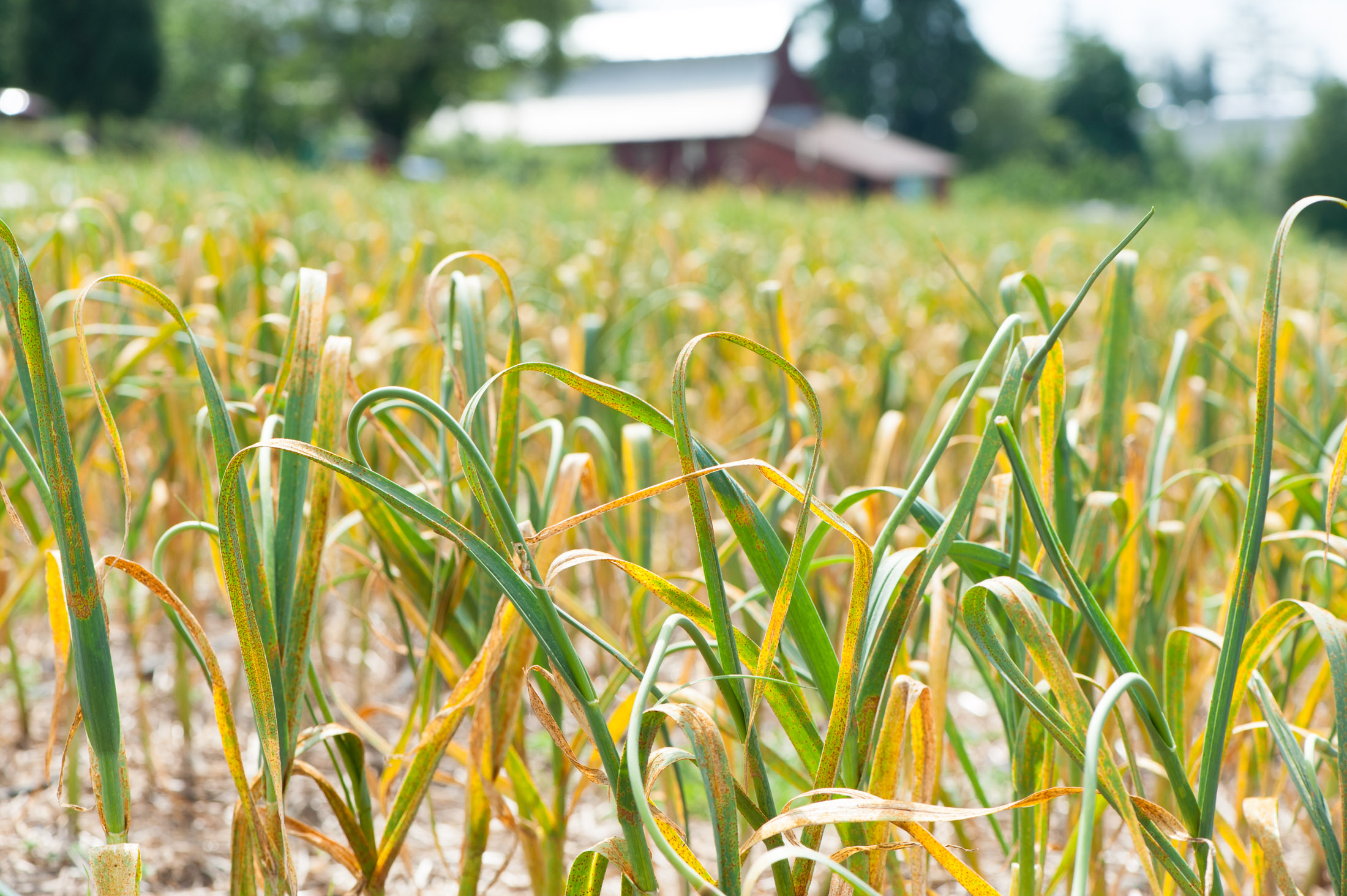 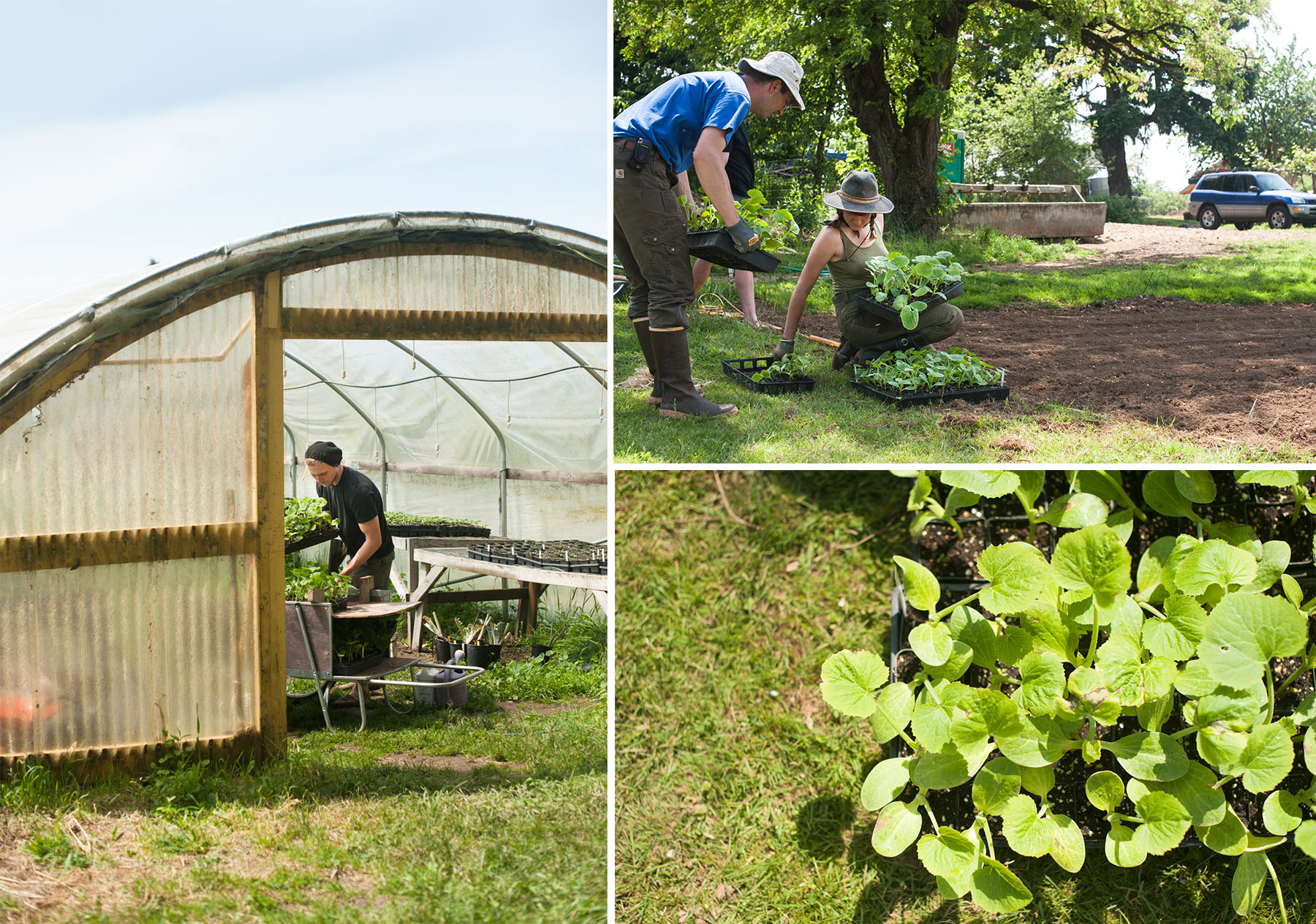 A lot had changed in the 6 weeks between my first visit to Zenger Farm and the warm late May days of my most recent visits. The rows of kale and spinach were no longer diminutive seedlings, but instead the kale’s foot-long greens dominated their section of the farm, impossible not to notice. The Urban Grange, Zenger’s future base of operations, looked like a real building, complete with windows. And Brad, Brittany, and Aaron walked around Zenger with confidence and knowledge, as well as slightly more muscular arms, tanned faces, and increasingly dusty boots and hats. 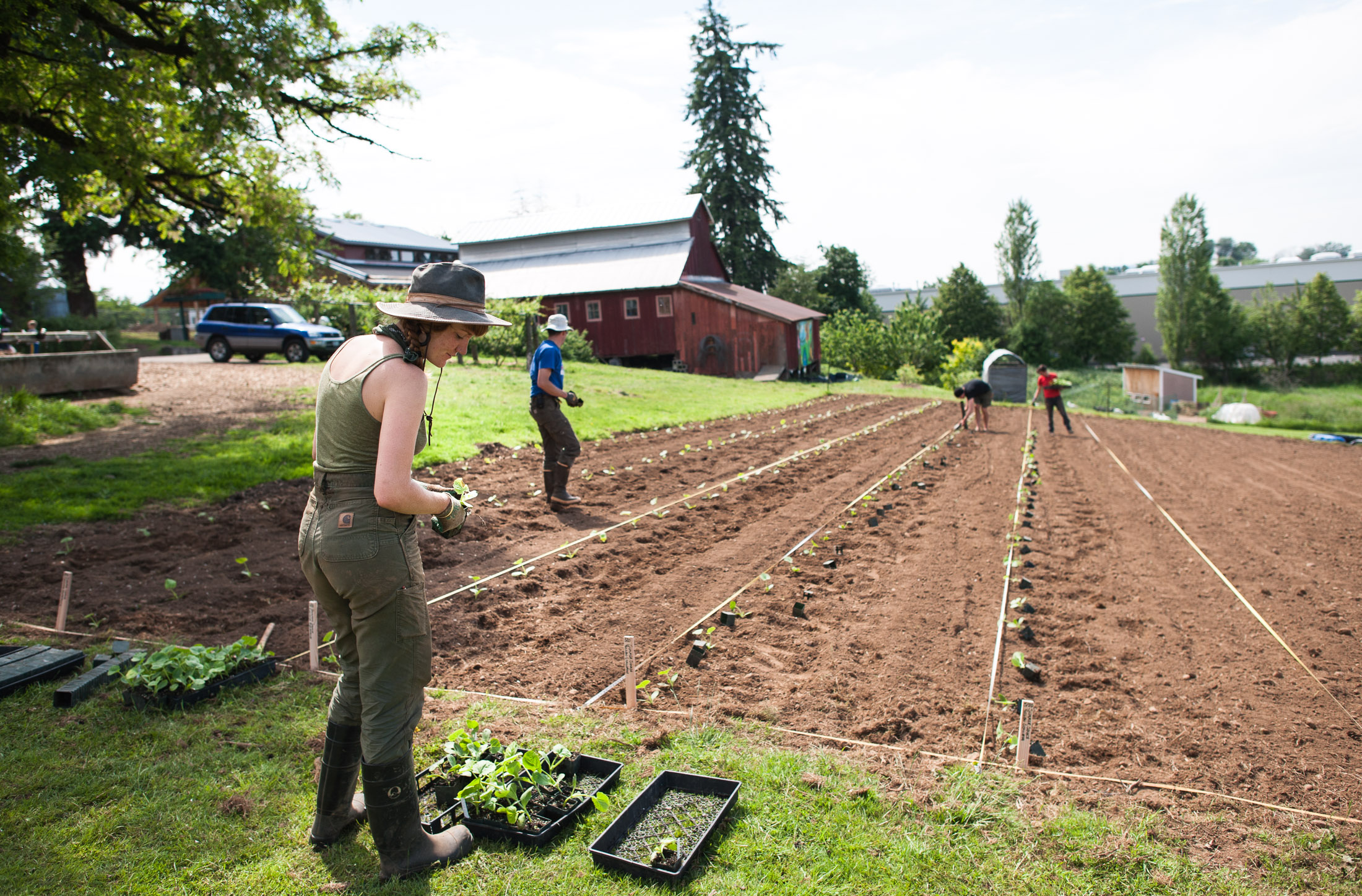 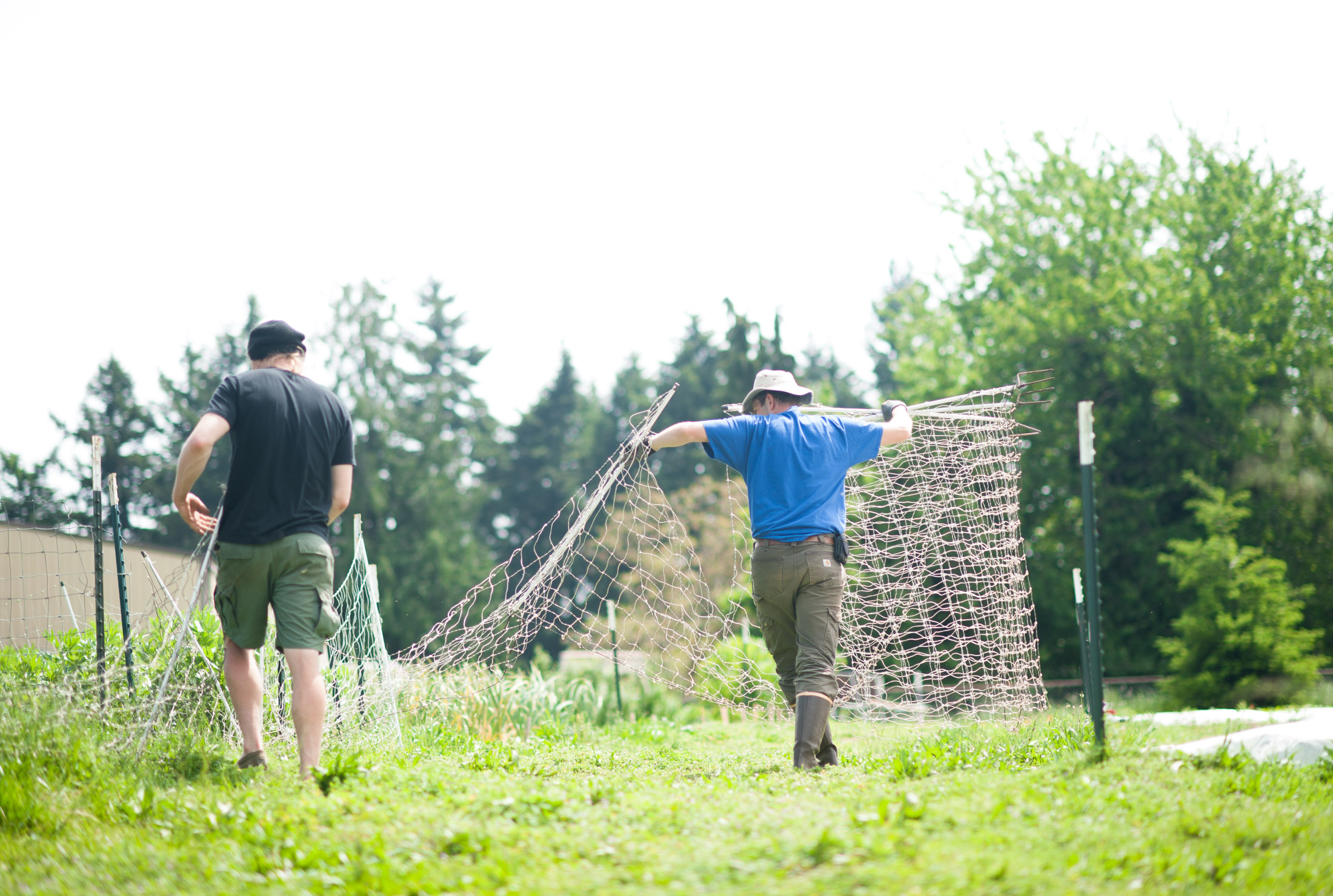 On a sunny Wednesday afternoon, I watched and photographed Brad and Brittany rotate from task to task, working alongside farmers Sara Cogan and Bryan Allan. (Aaron was sick that day, though I didn’t feel any noticeable stress or extra frenetic energy that might result from missing a valuable hand). When I first arrived, Brad and Bryan were moving fencing (“the glamorous side of farming”, Bryan joked) before Brad transitioned to the overtly humid greenhouse. A few minutes spent inside made me anxious for the cooler outdoor air, but Brad seemed unfazed by the heat as he loaded up summer squash seedlings into a cart, carefully recording notes before he moved each tray.

I walked alongside Brad to the freshly prepared field near Zenger’s barn, where all four farmers claimed a carefully measured row and began dropping the squash seedlings, 1 every 16 inches. When I talked to Brittany a week later, she admitted that the mental math of the exact spacing was challenging to quickly calculate, though to any outside observer, she moved efficiently and with purpose. Brad and Bryan transplanted the seedlings while standing in a half squat, half lunge. I remarked that the position looked challenging and Bryan responded that the posture works as long as you bend from the hips, not the back. Brittany and Sara transplanted while seated or crouched, so clearly, transplanting posture is personal preference! Brad told me that transplanting squash is much easier than parsley, the plants they had just finished transplanting when I’d first arrived. The parsley seedlings are much smaller and are planted closer together than the squash transplants, a process the involves more more precision – and more time. 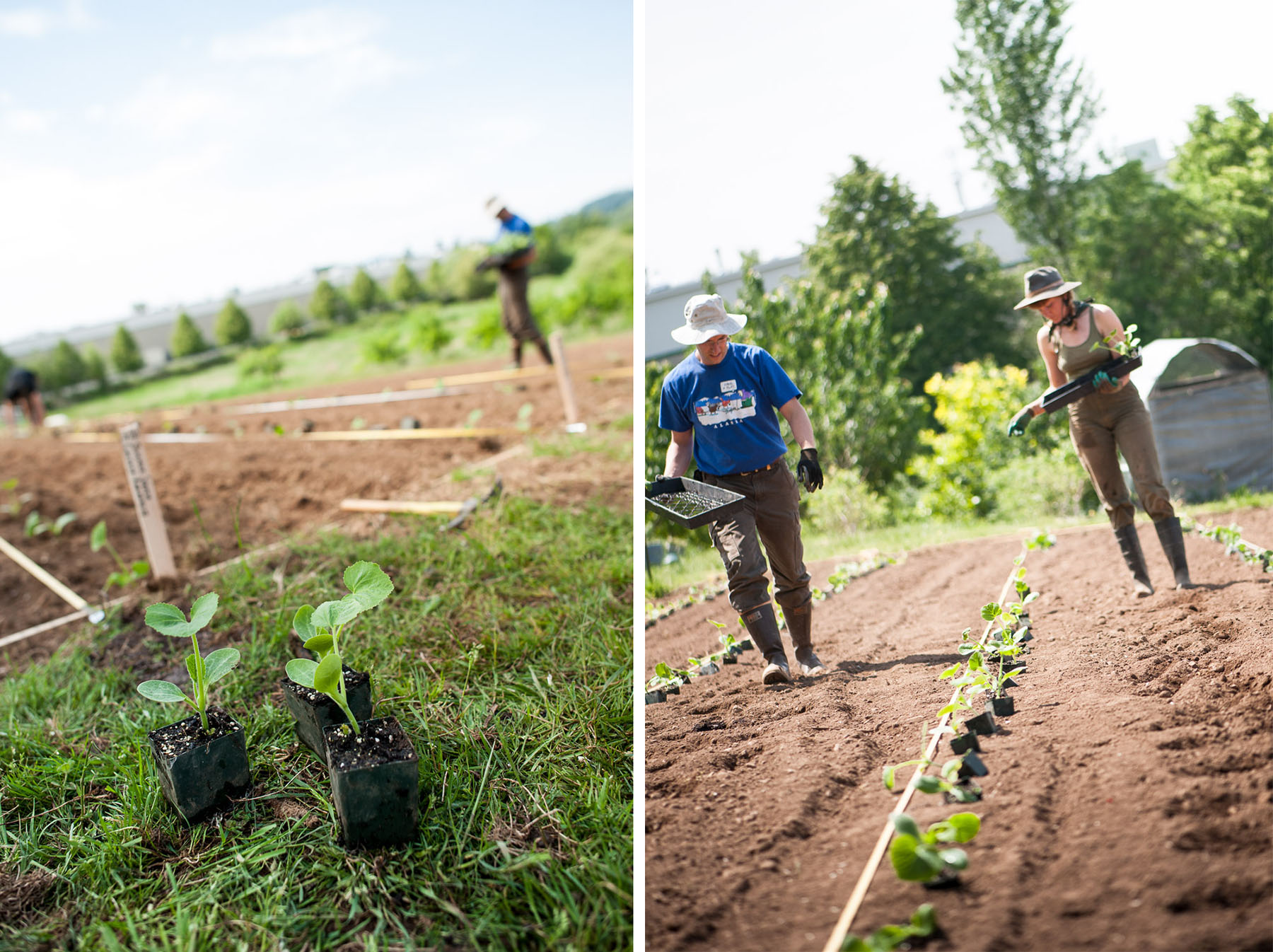 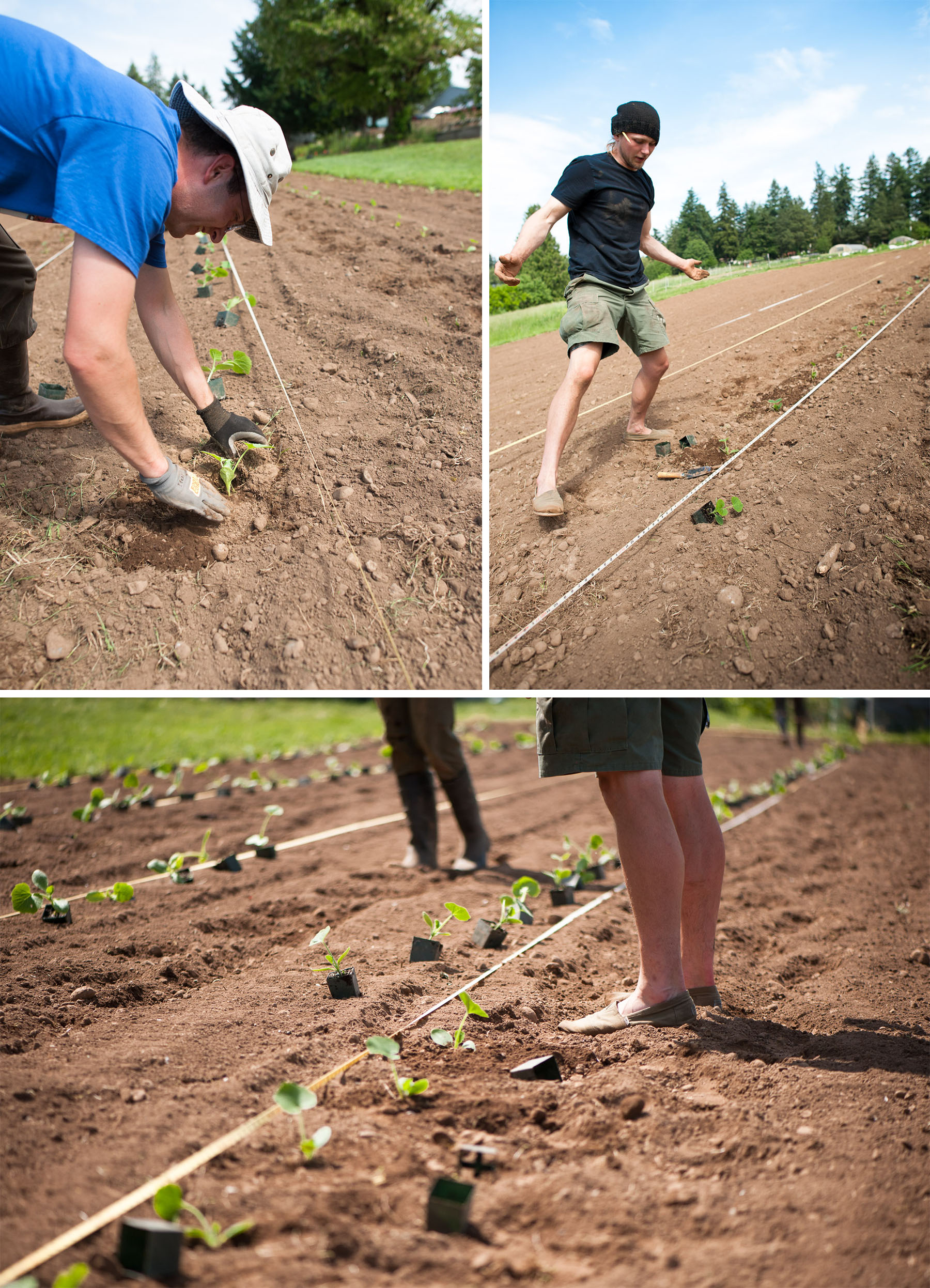 A week after watching transplanting, irrigation laying, and fence moving, I returned to Zenger to talk to all three interns, including Aaron, who had ended up missing three days of work that previous week, a combination of illness and exhaustion. All seemed much more settled and at ease; the three walked through the property with a sense of familiarity and each intern separately told me that certain tasks that had once taken an hour and a half five weeks ago – like weeding with the hula hoe – now only took them thirty minutes. Other parallels in our conversations centered around the word “efficiency” and how each remarked about either losing weight or always being hungry. 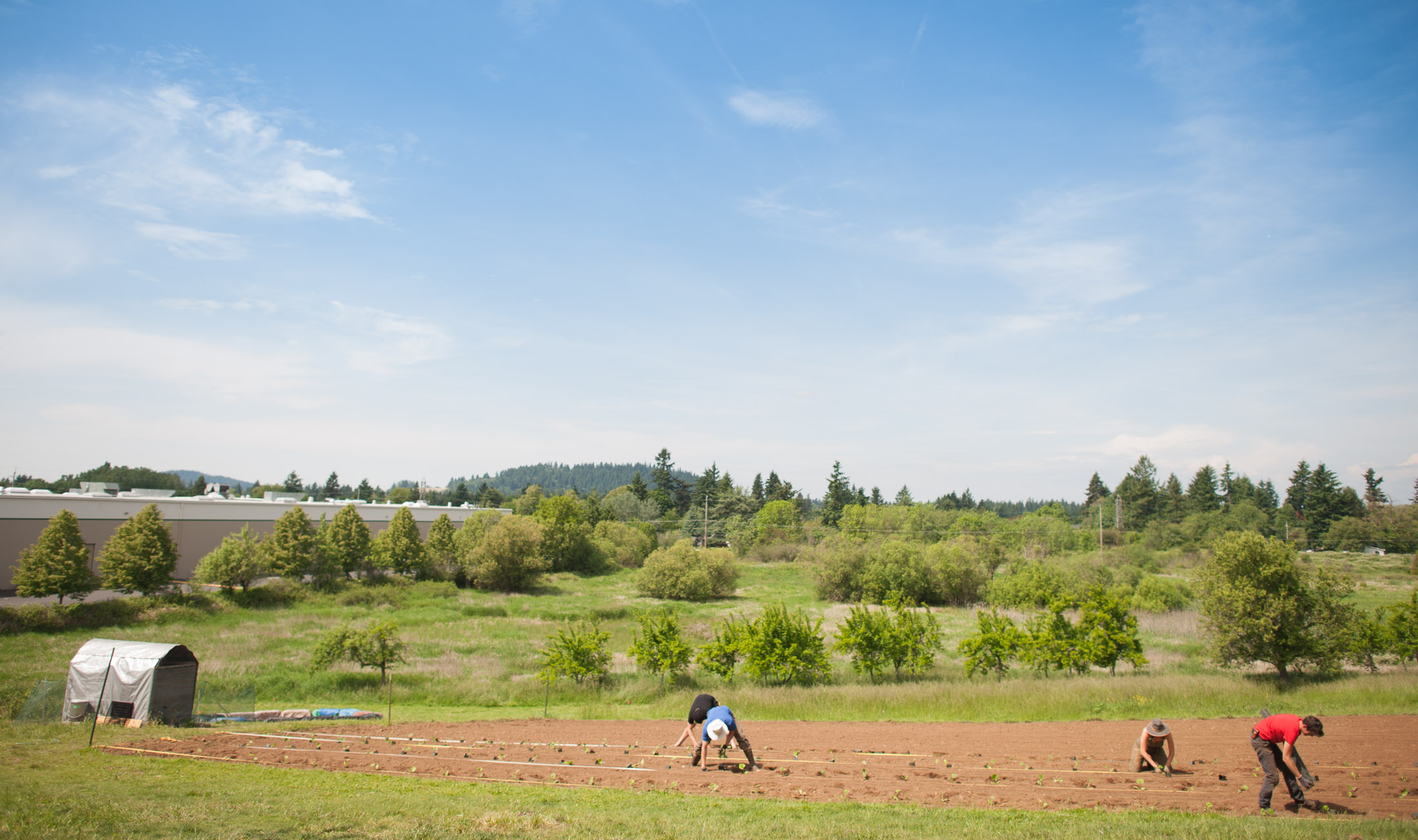 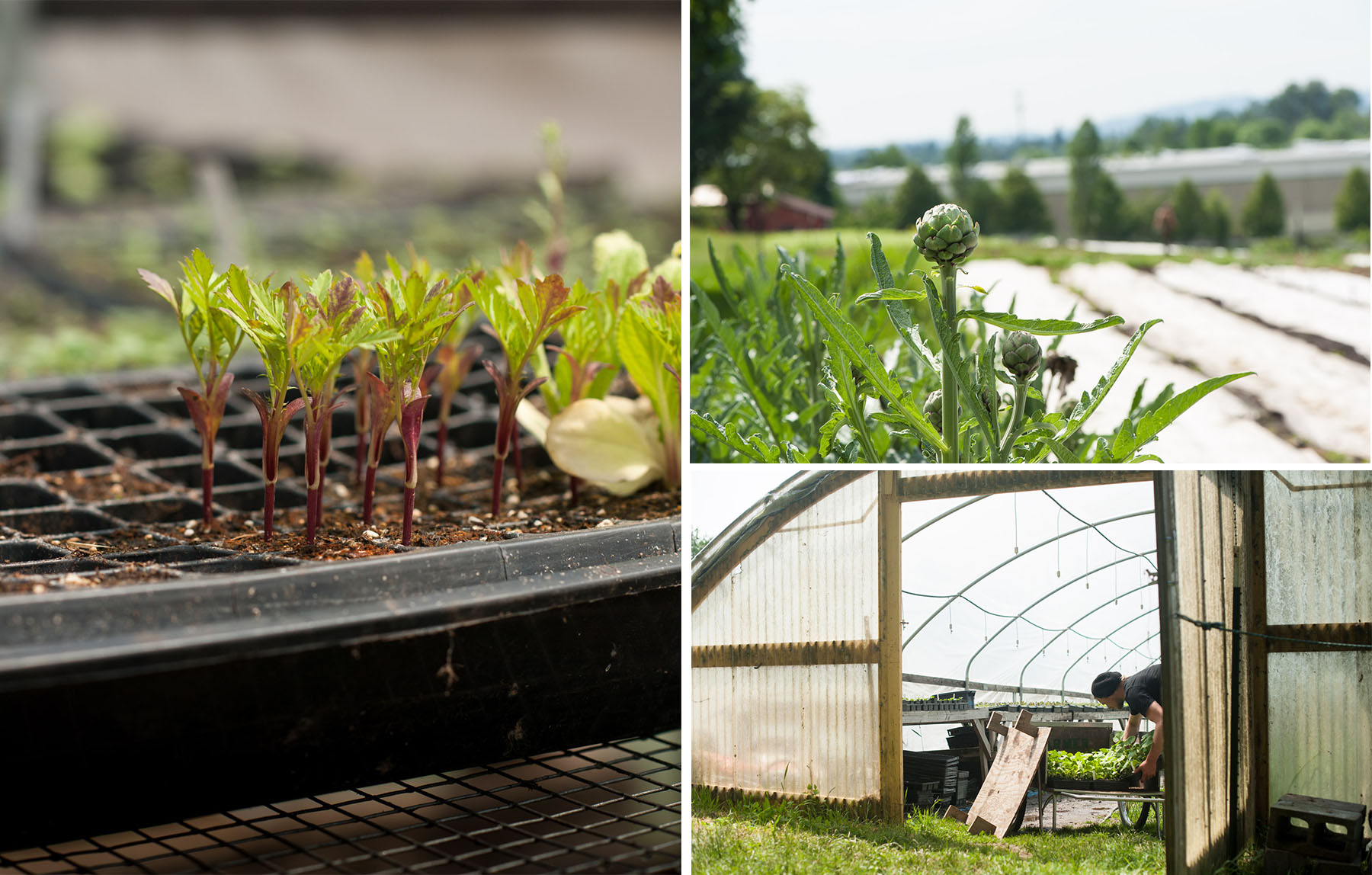 Aaron told me that building certain skill sets, like tilling, “no longer need a discussion”, explaining that it’s a matter of spending time on skills until they become second nature. And many of the tasks are the same, day in and day out: weed, seed, transplant, harvest. Brad brought up the importance of learning how to properly and effectively teach volunteers in a way that allows the volunteers to feel empowered, while at the same time recognizing that if he doesn’t clearly explain something, it’ll be on him to go back through and correct the mistakes made. And Brittany remembered a day where she struggled with direct seeding carrots. “It was hot, I was tired. I didn’t know if they were going to come up. Three weeks later, there are baby cotyledons poking out of the ground. I did it!” By the way, cotyledon is Brittany’s new favorite word; she sprinkled it into our conversation at least four times. 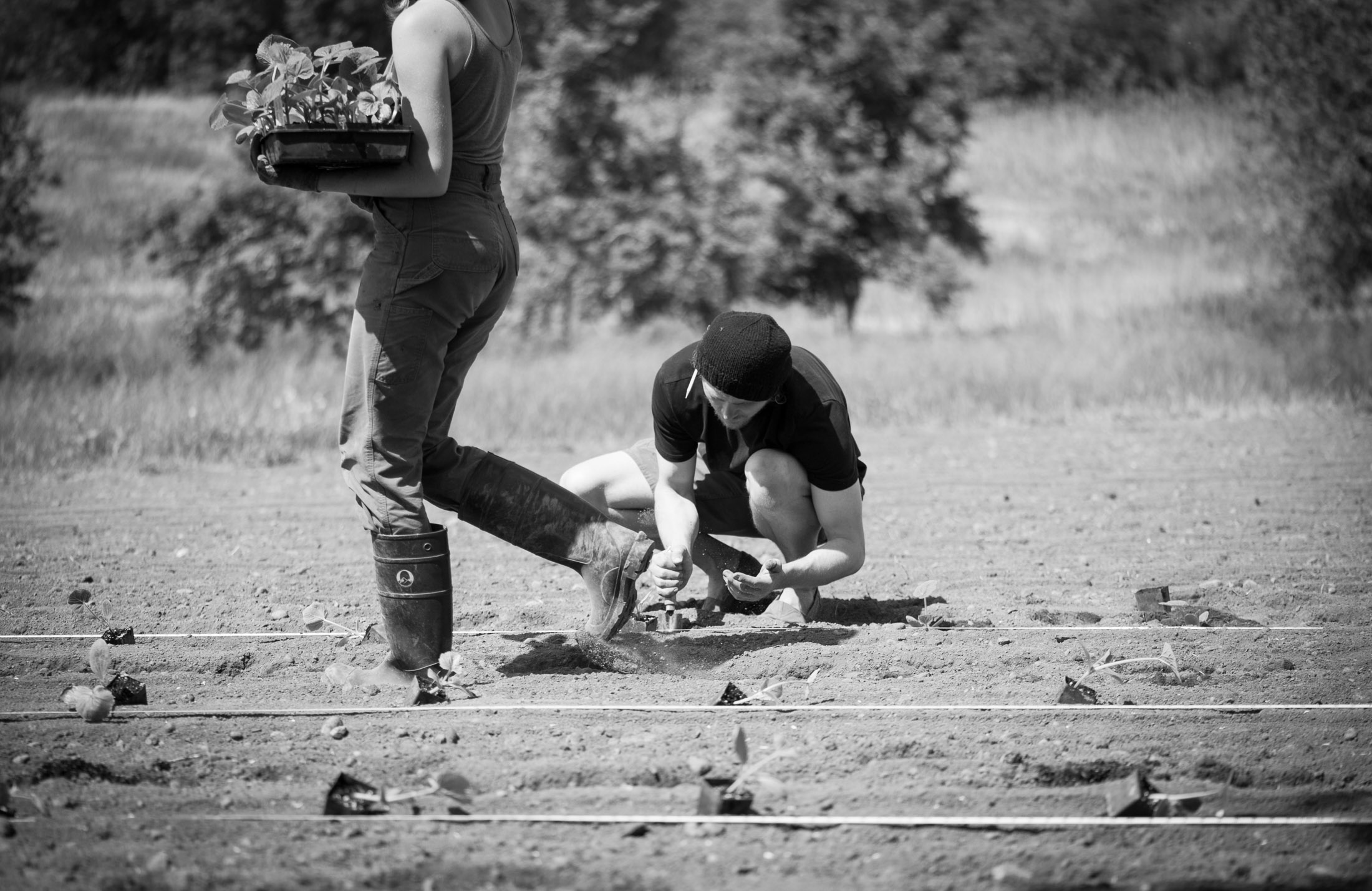 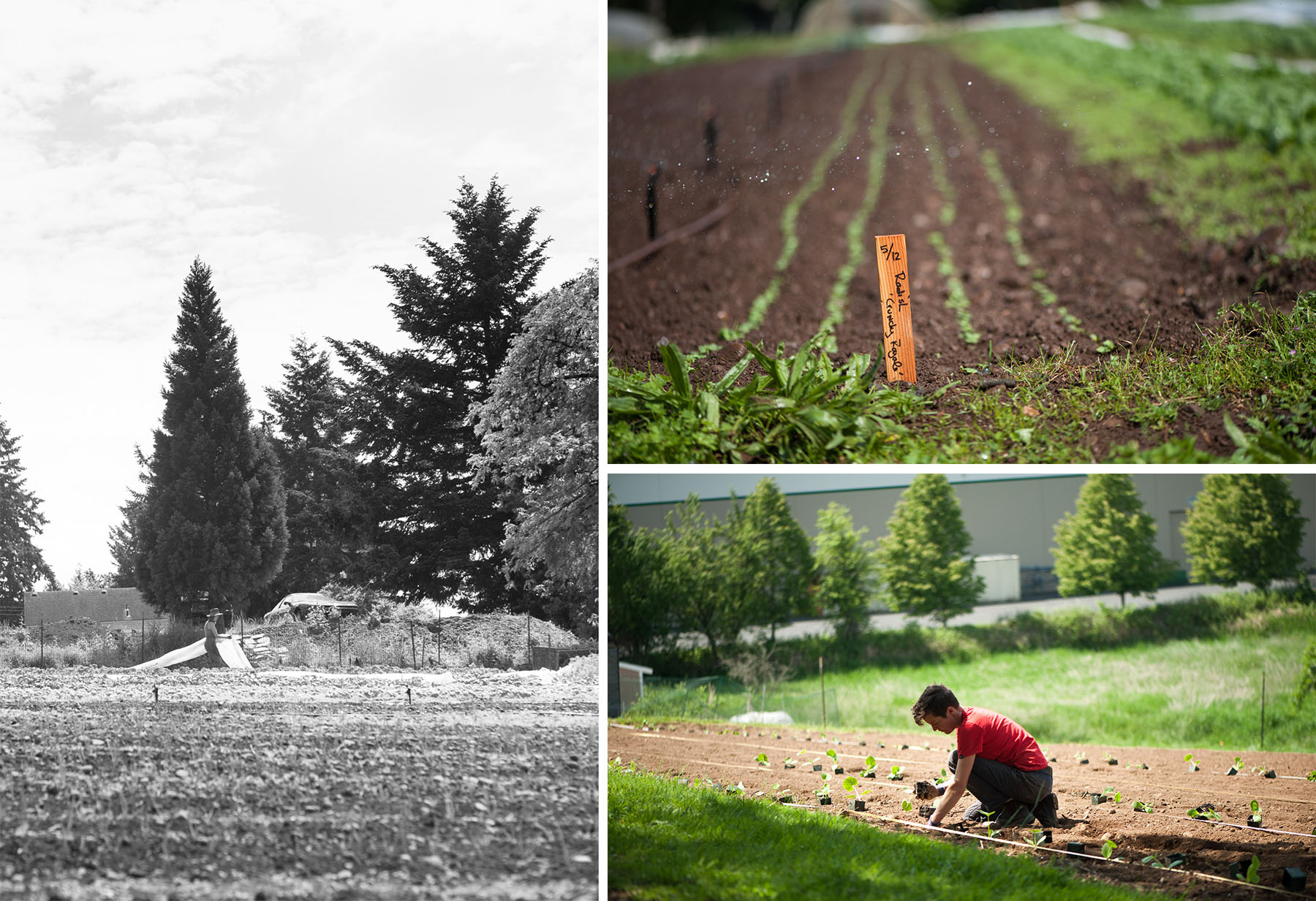 On those two May visits, the entire property bustled with activity, including loud energy from a visiting school group that involved the children flinging the docile chickens into the air, hoping they’d fly, the beekeepers checking in on the hives, and the background construction noise on the Grange. On the edible side, not only were many of the seedlings in the process of traveling from greenhouse to ground, but a few days after my visit, Brittany and Bryan would work at the opening Lents Farmers’ Market. And the following week, all five farmers would harvest and prepare for the first Zenger Farm CSA pick up. 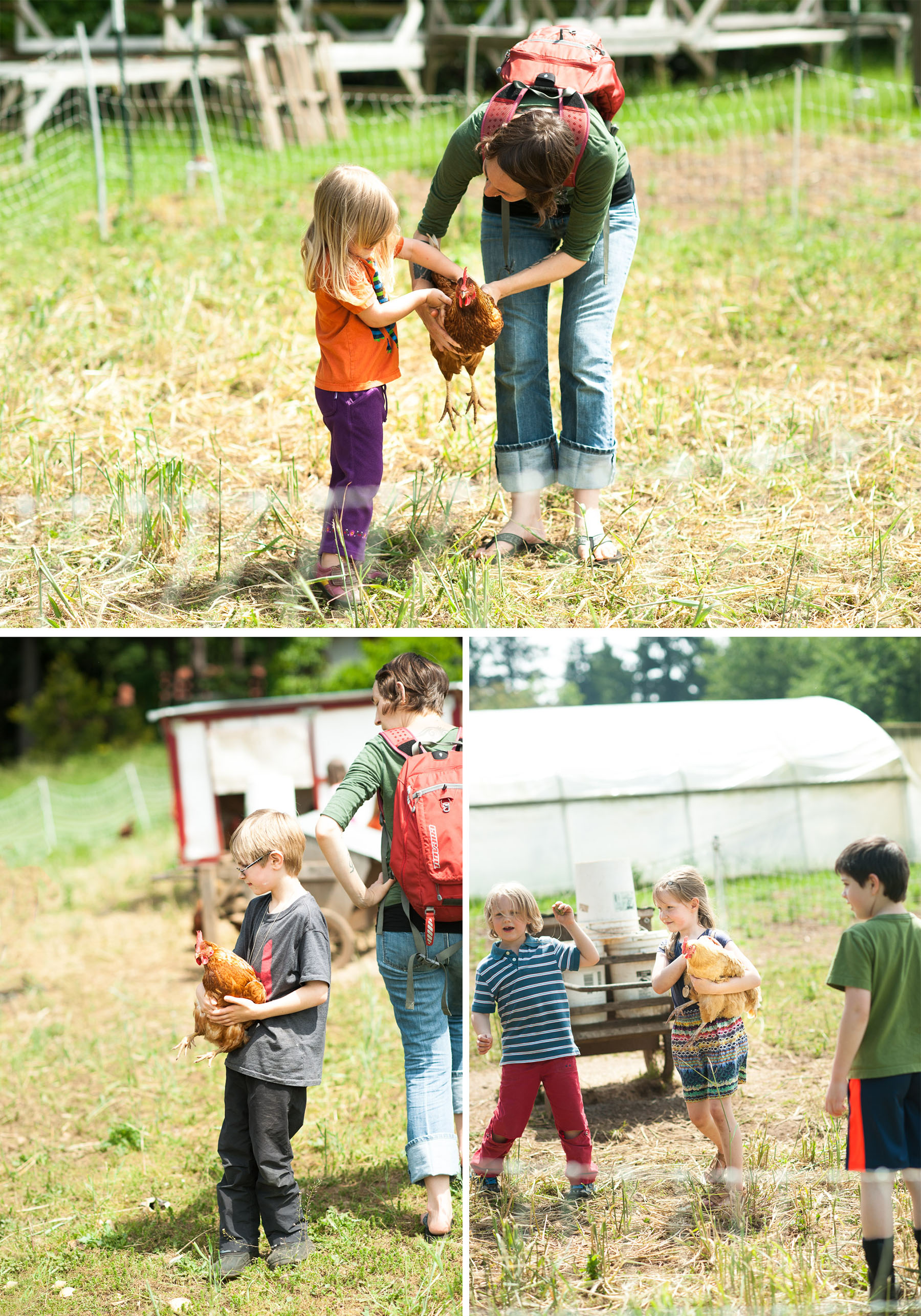 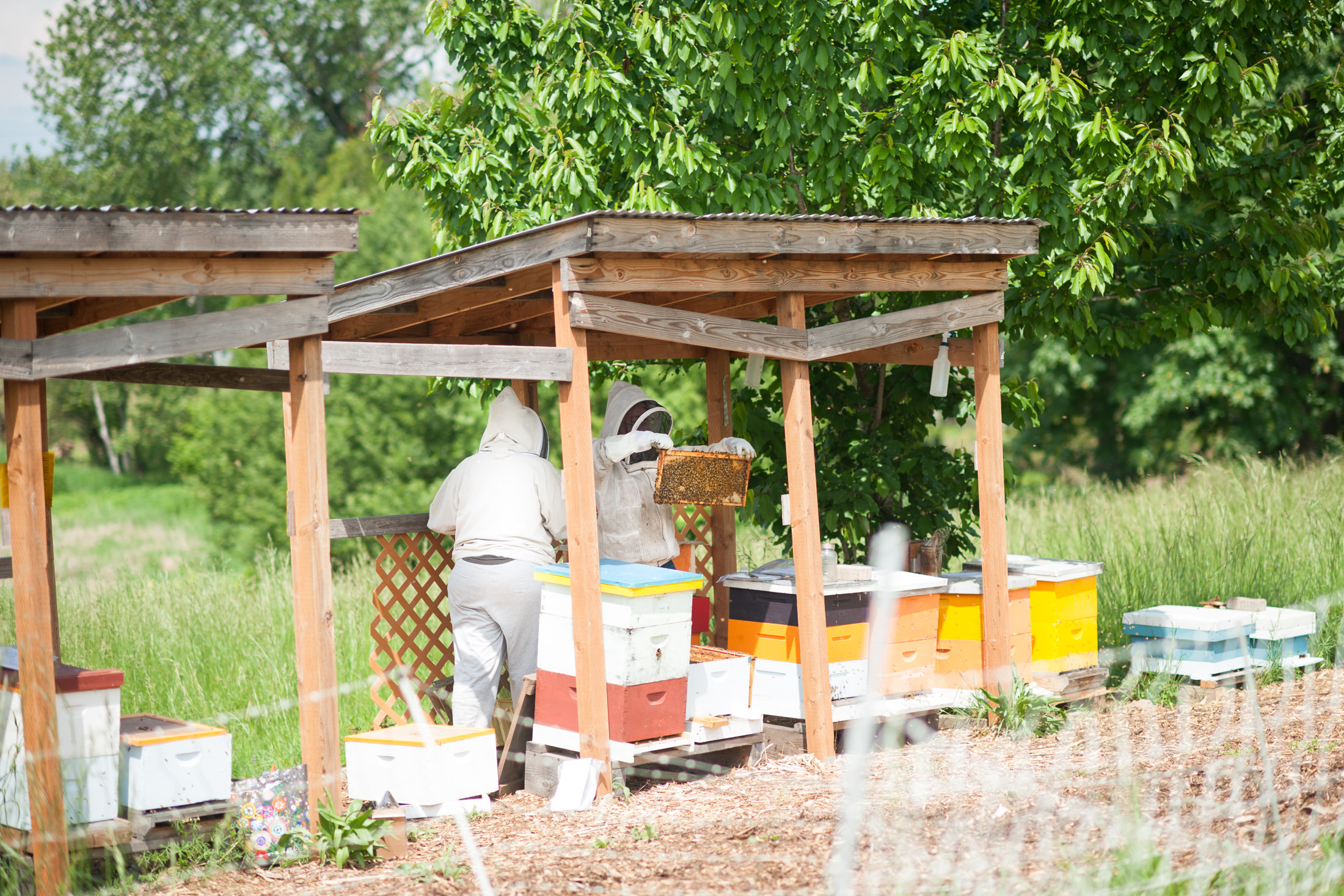 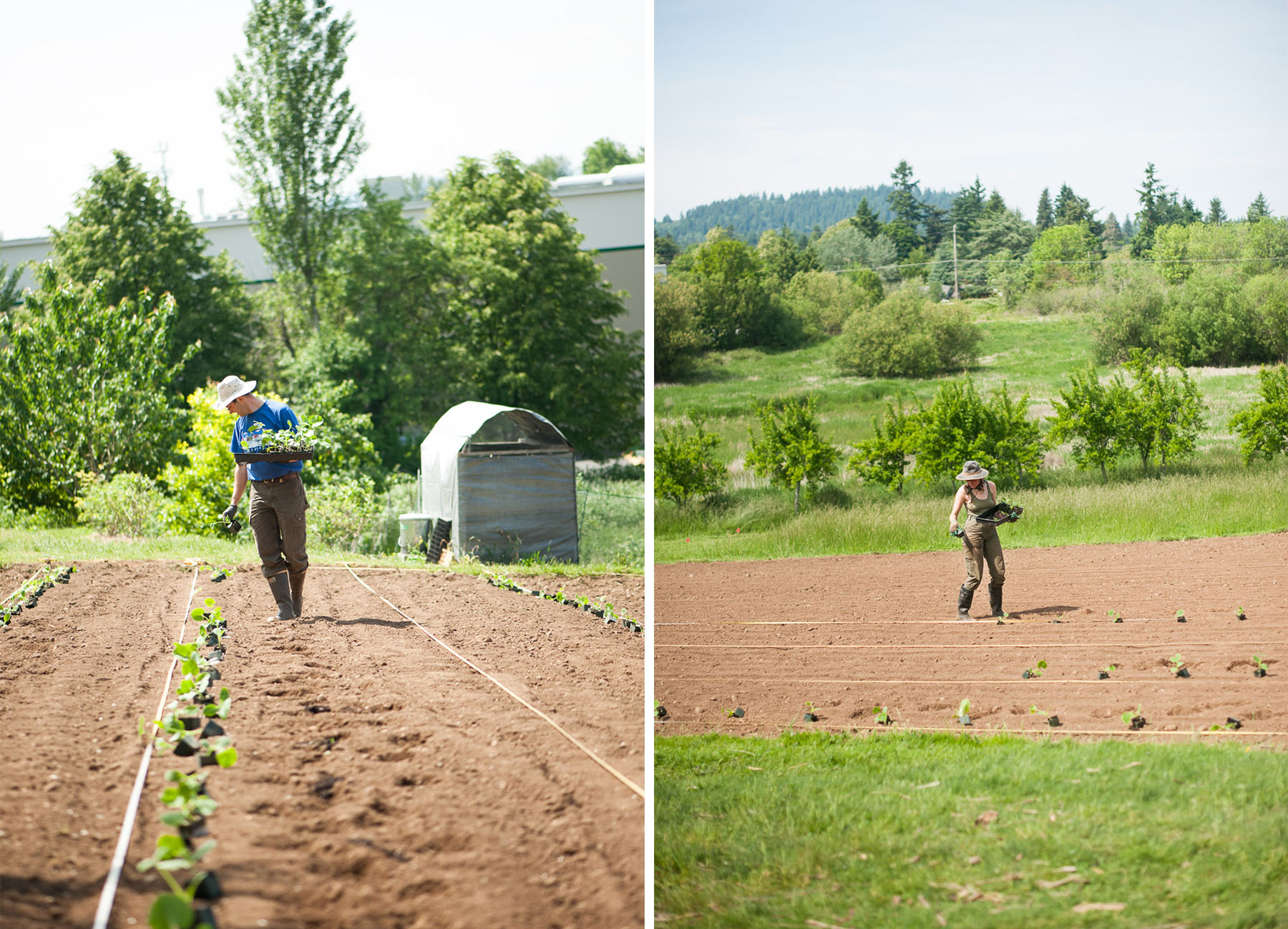