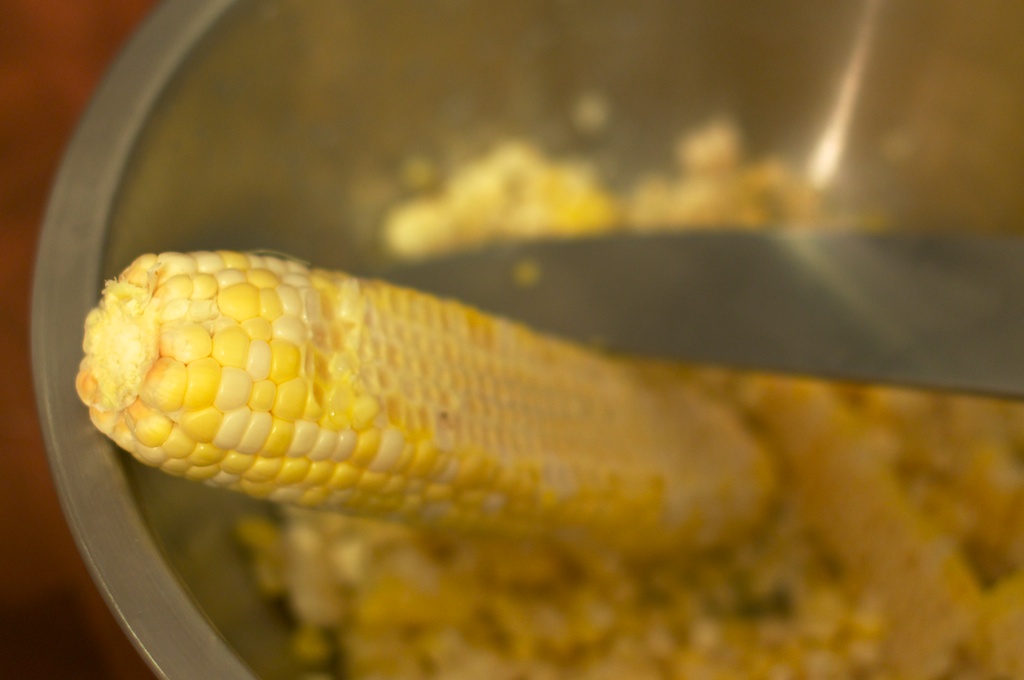 Our corn was grown by John D Madura Farm, a farm specializing in a staggering number of pesticide free vegetables and mushrooms.  Purchasing no-spray corn means running the risk of finding a worm or two in a few of the ears.  I'd rather deal with a squishy worm than knowingly eat corn that's been doused with chemicals.  Not only can these chemicals remain on the corn, have you ever seen a video of how corn fields are sprayed?  It's not exactly an accurate system.   According to environmental scientist G. Tyler Miller, over 98% of sprayed insecticides and 95% of herbicides effect something other than their target -- including air, water, animals, and food.  Eating sprayed corn makes me implicit in a system that damages our waterways, air, wildlife, and potentially triggers the dangerous development of spray resistant weeds and pests. 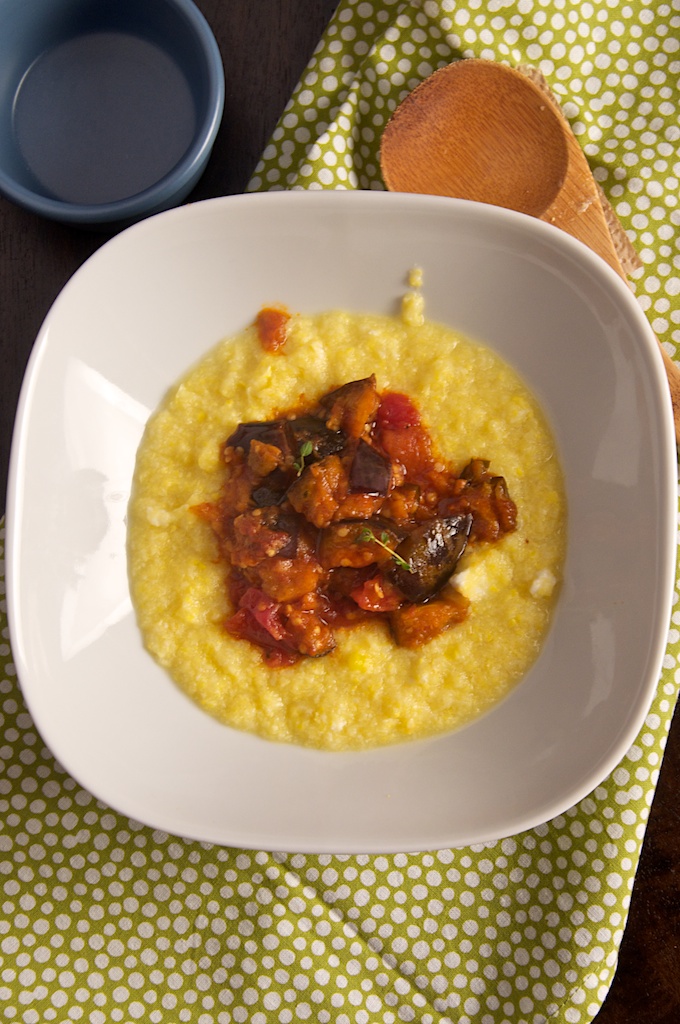 Okay, back to the worm.  One of the ears of corn I started shucking had several worms.  I cut around the worms and shucked what remained.  This left me with too little corn for the recipe, but because I was tired and hungry, I neglected to shuck an additional ear of corn.   Dinner that night was excruciatingly tasty... and small.  Because the amount of corn was incorrect, our water ratio was incorrect.  We also cooked the polenta in too wide of a pot, rendering 5 ears of corn into roughly half a cup of polenta! 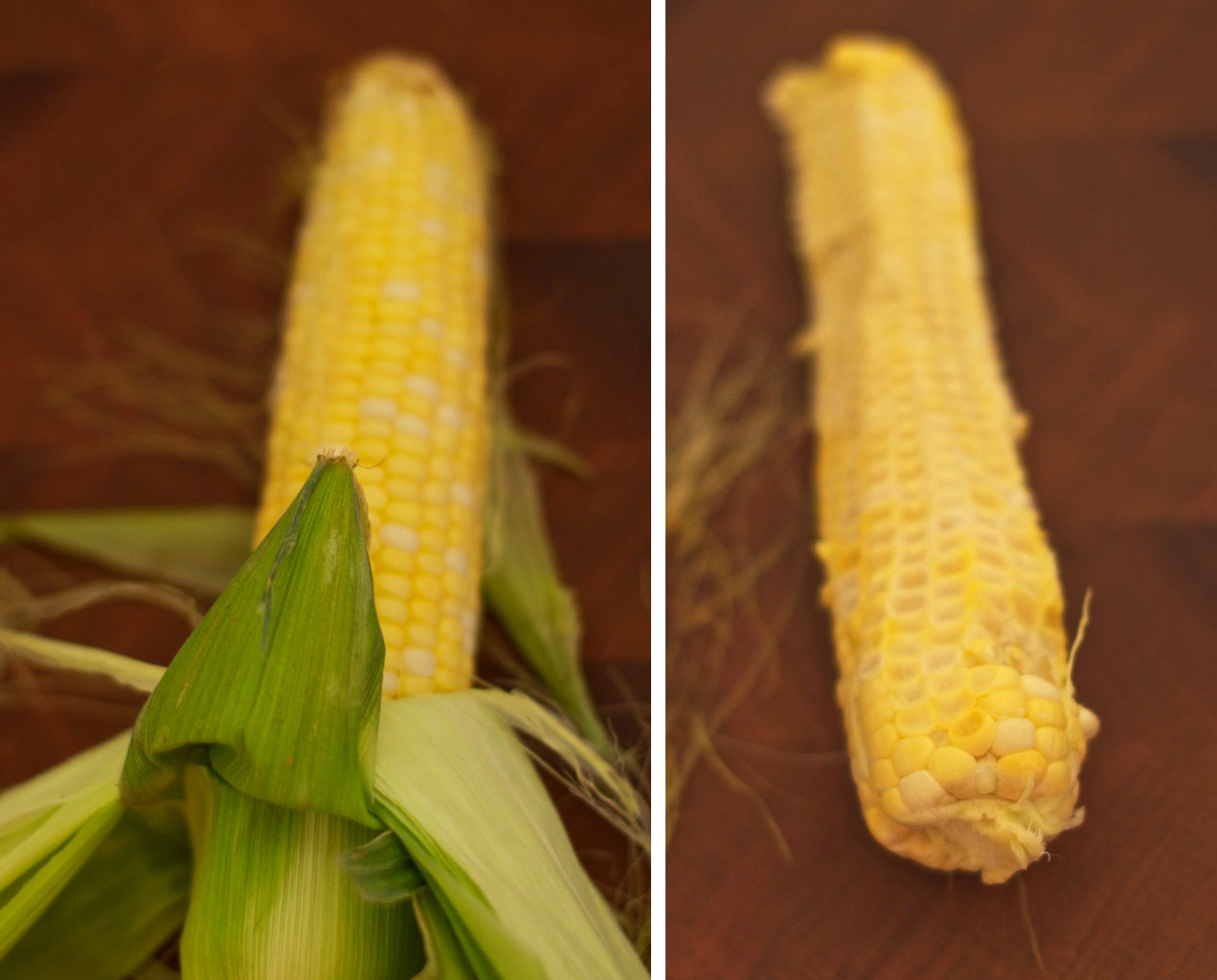 Sweetcorn polenta might be one of my new favorite tastes, especially when topped with the slow cooked tomatoes and eggplant featured in this recipe.  After our small dinner last Thursday, we bought more corn this weekend--this time from another no-spray farm, Oak Grove--and made the recipe again.  We used a narrower pot, the appropriate amount of corn, and enjoyed a delicious (and filling) dinner.  The corn taste was slightly less intense than our original half cup, but the consistency was polenta like, not gummy, and it acted as a sweet base for our stewed topping.  Corn, eggplant, and tomatoes are all readily available at the market and I can't think of a more creative way to combine these three vegetables.  If you have a sauté pan, a pot, and a blender/food processor, you can make this meal in under 30 minutes. 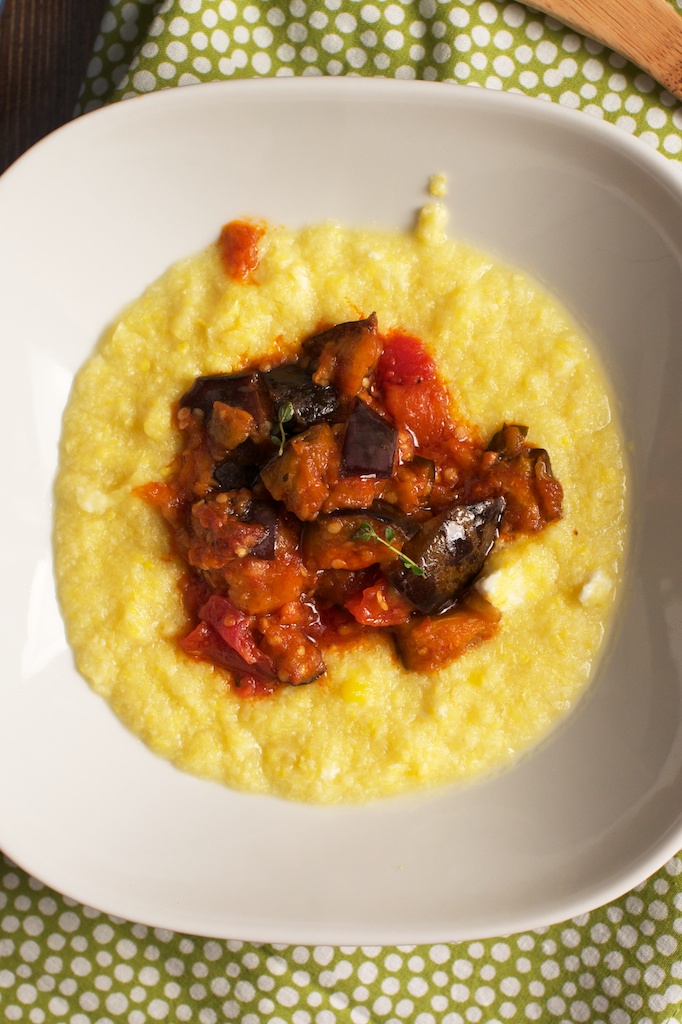 7 oz feta or ricotta salata (or another crumbly cheese), crumbled

1)  Start the polenta: Remove the leaves and silk from each ear of corn.  Chop off the pointed stalk.  Stand each ear upright and use a sharp knife to shave off the kernels.   Place the kernels in a medium sauce pan and cover them with water.  Cook for 12 minutes on a low simmer.

2)  Start the sauce: Heat up the oil in a large saucepan and fry the eggplant on medium heat for 15 minutes, until nicely brown.  Drain off as much oil as you can and discard it.  Add the tomato paste to the pan and stir with the eggplant.  Cook for 2 minutes and then add the wine and cook for a minute.   Add the chipped tomatoes, water, sugar, salt, and oregano and cook on low heat.

3)  Back to the polenta (while the eggplant is still cooking):  Use a slotted spoon to lift the kernels into a food processor, reserving the cooking liquid.  Process them until the kernel cases are broken down.  Return the corn paste to the pan with the cooking liquid and cook, while stirring every now and then, for 10-15 minutes.

4)  Back to the sauce: If you've turned the heat off on the sauce, warm it up now, stirring to combine the ingredients again.

5)  Finish the polenta: Stir until the mixture is like a mashed potato consistency.  Fold i the butter, cheese, salt, and pepper, and cook  until combined.

6)  Plate the dish: Divide the polenta among bowls and spoon eggplant sauce in the center.  Enjoy!