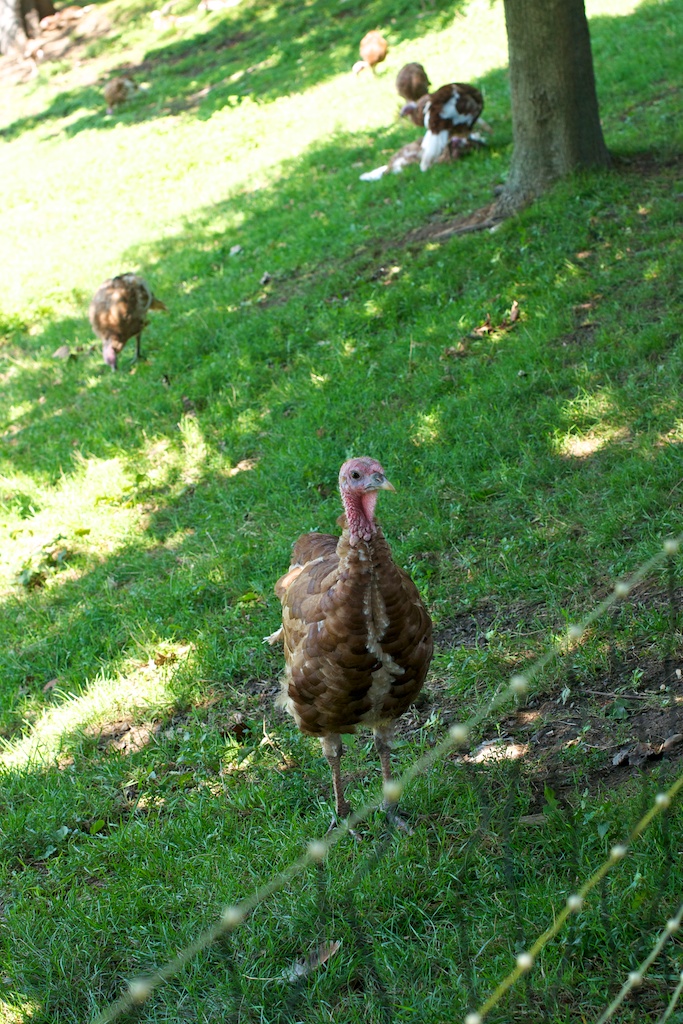 These half grown turkeys are currently living the good life at Stone Barns.  When we visited Stones Barns in July of last year, the turkeys looked like this: 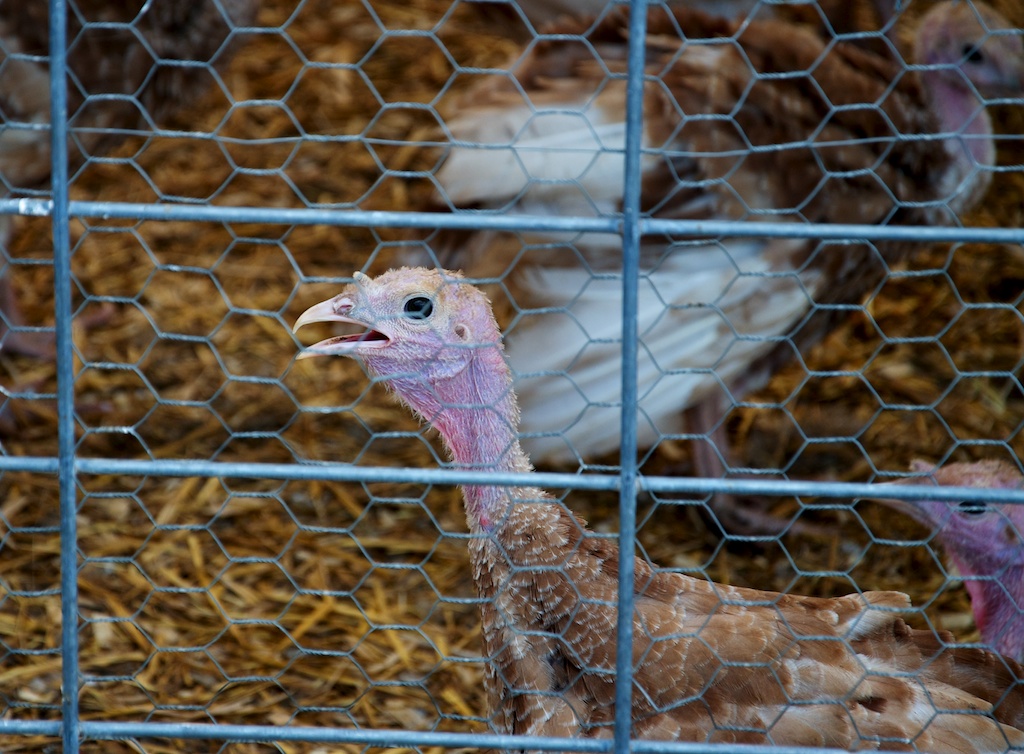 The turkeys were still roaming free, but instead of wandering outside, they wandered around hoop barns. The turkeys are kept in these hoop barns until they're big enough to fend off aerial predators. That said, pastured turkeys remain susceptible to other predators,and a coyote attack in 1997 killed a dozen Stone Barns turkeys. 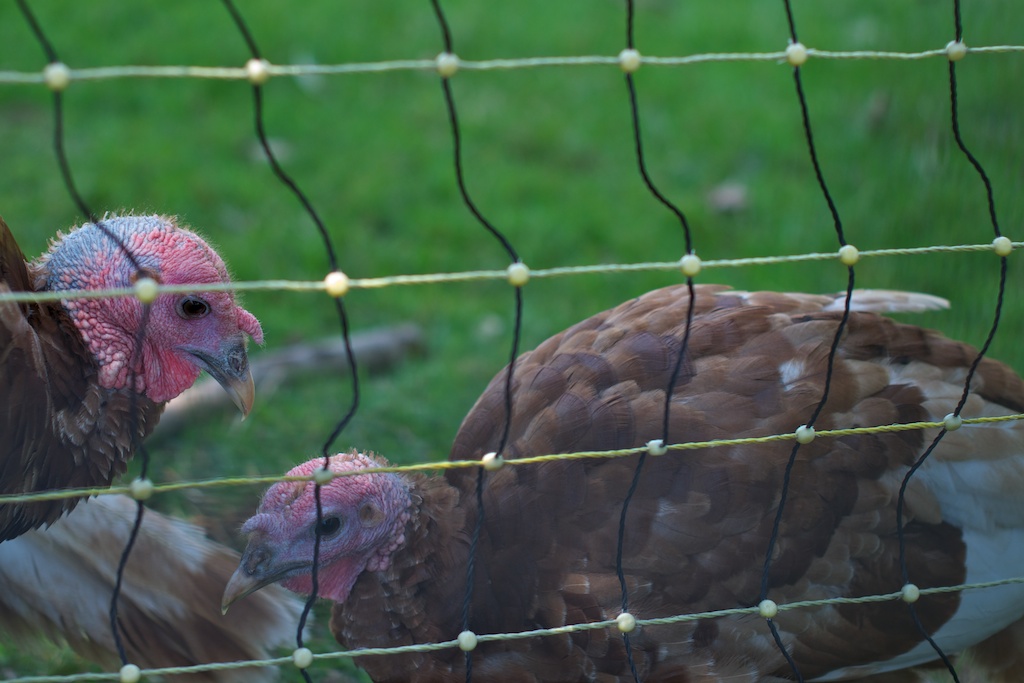 A year and a month later in the season found the turkeys dominating the hillside near Stone Barns' poultry processing center. The turkeys were huddled under trees, moving around in the sun, and very curious about what Justin and I were doing staring at them. (I wasn't planning our Thanksgiving menu but maybe Justin was?). 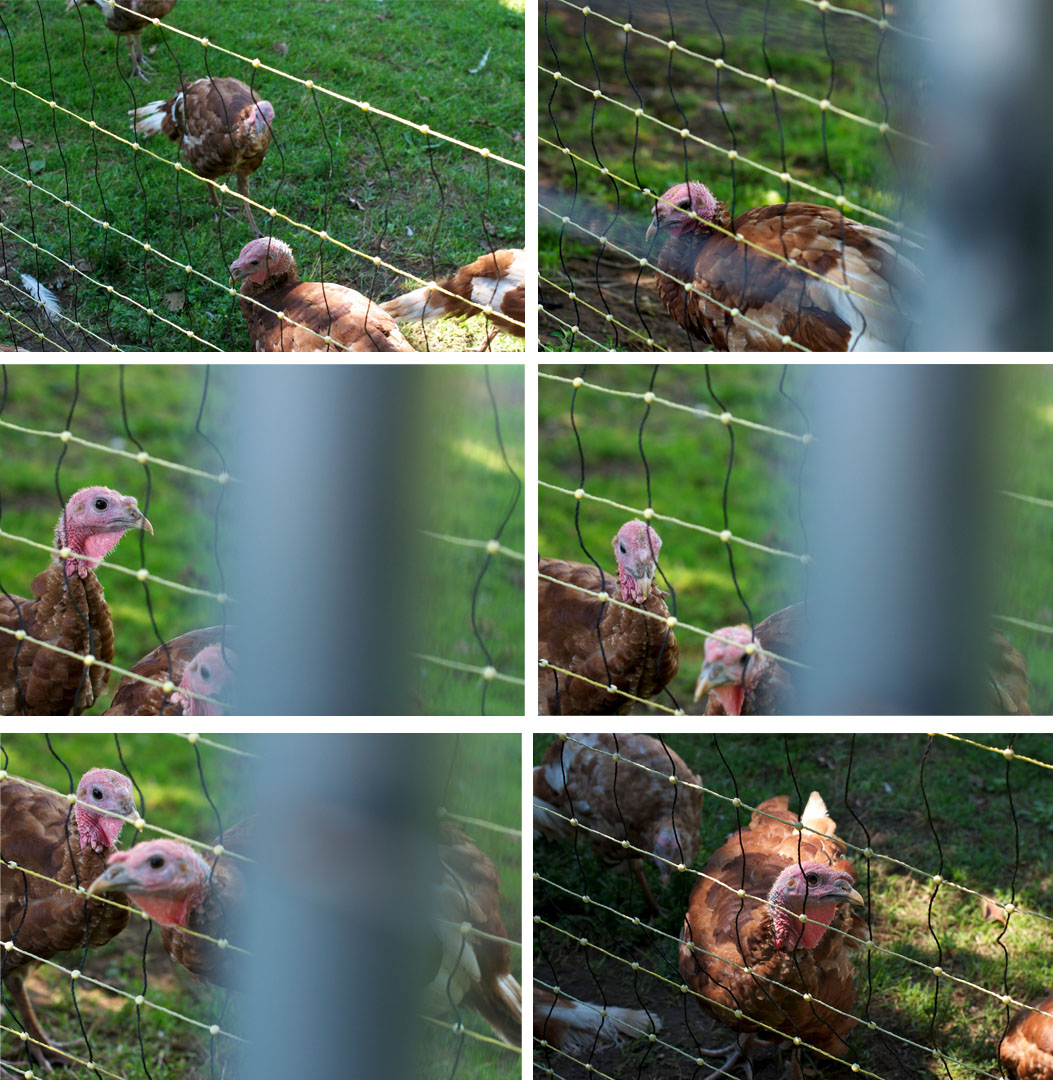 Stone Barns raises two varieties of turkeys, Bourbon Reds and Broad Breasted Whites.    The turkeys forage for their food and fertilize the pastures before the sheep rotation.  A heritage breed, Bourbon Reds currently have an estimated global population of under 10,000.  They grow slower than non-heritage breeds and weigh between 9 and 12 pounds at slaughter, compared to a standard turkey's weight of 30 pounds, according to The USDA’s National Agricultural Statistics Service.

On a warm summer day like today and the Saturday we visited,  it's impossible to reconcile the fact that we'll turn the calendar to Fall, and Thanksgiving, in under 3 months.  These curious turkeys will continue to enjoy the sun, breeze, and curious visitors until shortly before Thanksgiving.  Just before the holiday, the two varieties of turkeys are slaughtered and processed on site, in a former horse barn converted and used for slaughtering since 2007. They're then sold to the public and several restaurants, including Blue Hill.  If you want a chance to learn more about Stone Barn's turkeys, farmer Dan Carr is scheduled to lead a session at Stone Barns on November 14th. 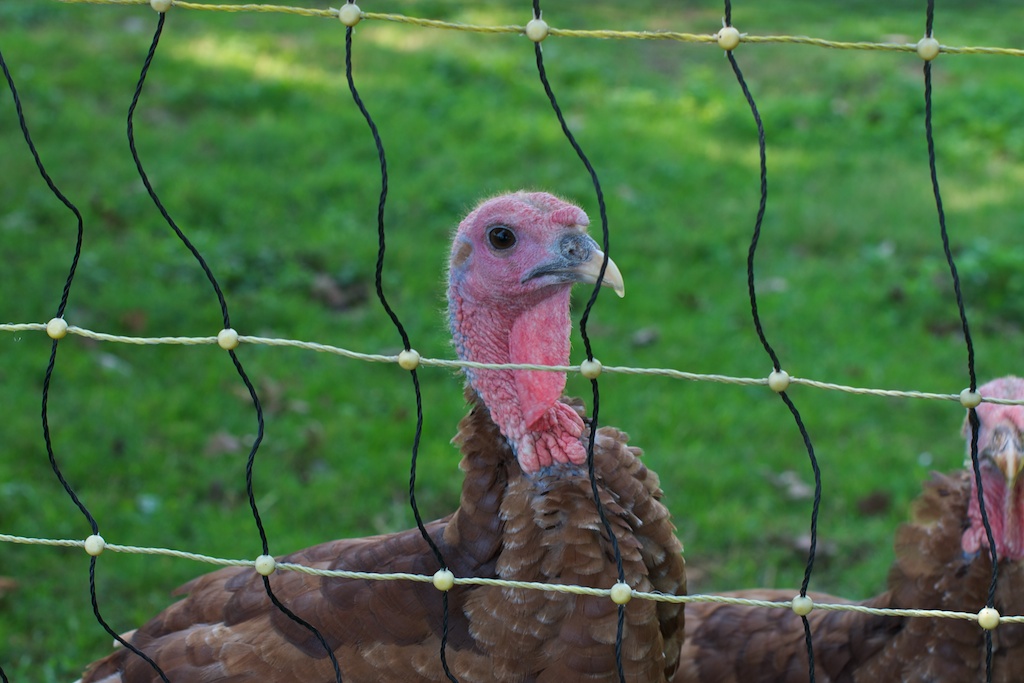 If you eat meat and your Thanksgiving isn't Thanksgiving without a turkey, these are the kind of turkeys you want to buy, prepare, and serve.  Understandably, most of can't buy our turkeys from Stone Barns. But why should we be looking for a heritage breed--or if not heritage, a breed that's able to walk? Why is it important for our turkey to have been raised on pasture? What kind turkeys are available?

55% of turkeys available in the United States come from only four producers.  These turkeys are raised in factory conditions, their natural diet of foraged foods replaced with corn and soybeans.  In 1920, we ate from 60 different breeds of poultry; today we eat only two or three varieties.  And most of us have access to only one variety of turkey, the broad breasted white (the second kind raised at Stone Barns, albeit in entirely different conditions).  These turkeys barely qualify as turkeys anymore, as most of their natural characteristics have been bred out of them. Many can't stand and none have the ability to mate naturally. As a result of the genetic base being lowered, these animals suffer from chronic maladies and are prone to disease. 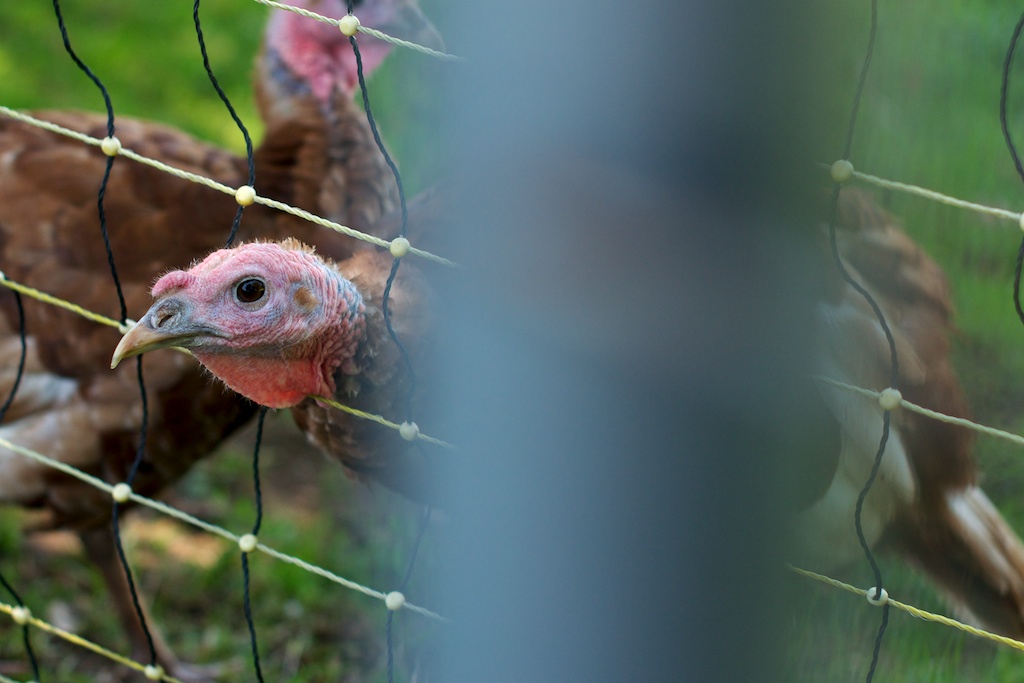 This loss of diversity opens the door to the possibility of a genetic or environmental catastrophe that could eliminate our few remaining breeds.   As I detailed extensively in my articles about The CAFO Reader, these turkeys are raised in industrial settings that are detrimental to our environment, our workers' health, our health, and a sound, safe, food system.  Animal husbandry has been eliminated in the face of industrial efficiency.

Now, three months before Thanksgiving, the turkeys at Stone Barns have entered into a symbiotic relationship with the farm and consumer.  They help to aerate and fertilize the grass while enjoying species-specific behaviors. The pay-off is both the health of the farm and animals and in how the turkeys taste.

When the weather turns a little cooler and you begin to organize your Thanksgiving menu, visit Local Harvest, Heritage Foods, and your local farmers' market to talk about options for ordering a turkey.  Remember these stipulations:  you're looking for a turkey that's antibiotic free, has had the ability (and capability) to walk, ate a natural diet, and breathed fresh air.