I admit to knowing very little about the differences between pear varieties.  Growing up, I either ate stewed pears in my high school cafeteria--because when I didn’t pack my lunch, there was truly very little else to eat--or whole pears, along with apples, in the Fall.

As a child, my twin brother really loved pears, but I never quite understood their allure, except for that rare occasion when I would chomp into a perfectly ripe one. More often than not, when I eat pears, even now, I feel like I’m missing out on a secret.  The pears look promising, so why don’t they taste like they should?   Why are they either hard or past their prime? Where is the consistency?

In the past, this inconsistency made me retreat from pears and seek out other fruit.  But because I enjoyed a few Bartletts and Boscs last winter, and because pears are one of the only fruit options currently at the market, it’s time to start eating, cooking with, and understanding the fruit.  Pears grow in a daunting 6,000 different varieties!  To keep it simple, I’m profiling the Bosc variety. 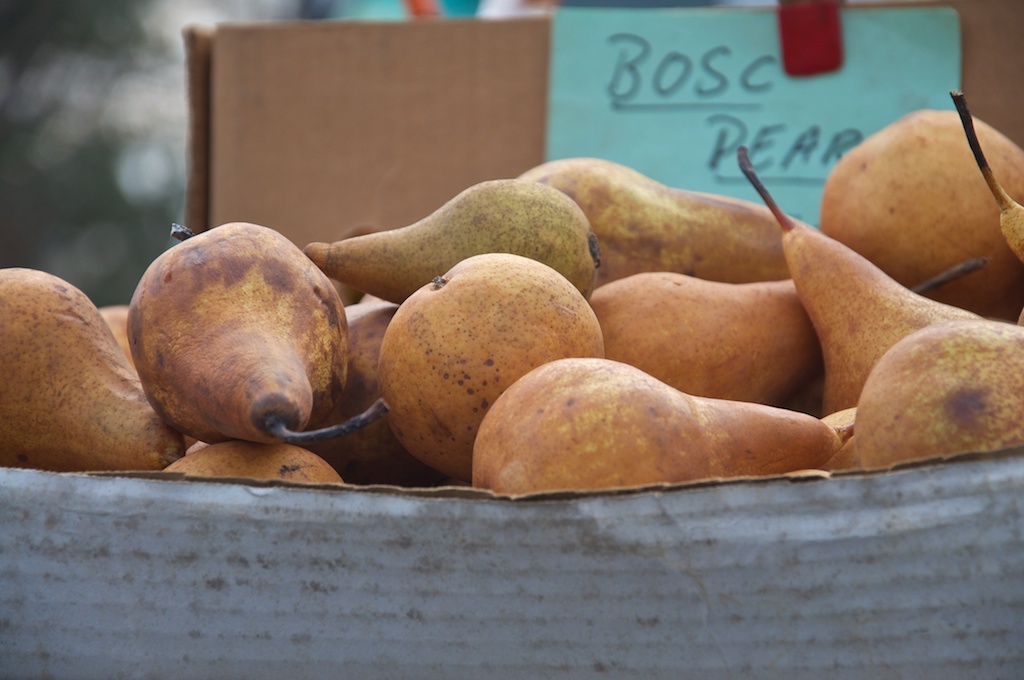 According to The Produce Bible, the pear first came into esteem when Versailles’s kitchen gardener began cultivating the buttery varieties we see today.  Pears fall into two basic groups:  Asian and European.  The Bosc pear is part of the European family, known for their buttery, slightly gritty flesh, and partially acidic flavor.  Boscs are aesthetically pleasing—when I see them arranged in a pile at the farmers’ market, I usually wander over to take a look at the stack of elegant cinnamon brown fruit.

Bosc pears are named after M. Bosc, the director of the Paris Botanical Garden and were first planted in the United States during the 1830s.  Nutritionally speaking, pears, both Bosc and otherwise, contain vitamin C, potassium, and fiber.

Choose pears that are unblemished and firm—just be prepared to wait to eat them!  A Bosc pear ripens at room temperature in 3-6 days.  You can tell if a pear is ripe by pressing your thumb into the base of its ‘neck’. (My research showed me that the ‘Check the Neck’ is trademarked by the USA Pear Association, so be careful with how you throw that phrase around!).

As the City Cook says, “A pear's appearance doesn't reveal how it's been harvested, handled and stored -- another argument for buying from local farmers where the odds are greater that you'll be getting a recently picked, carefully handled piece of fruit.”

If you don’t want to eat them right away, store them in your refrigerator in a single layer for several weeks.  When ripened, Bosc pears make a fulfilling snack alone or paired with cheese or nuts.  They really come into their own when integrated into a dish and paired with nutmeg, cardamom, or cinnamon. And whether you poach, sauté, or roast them, Bosc pears maintain their shape throughout. 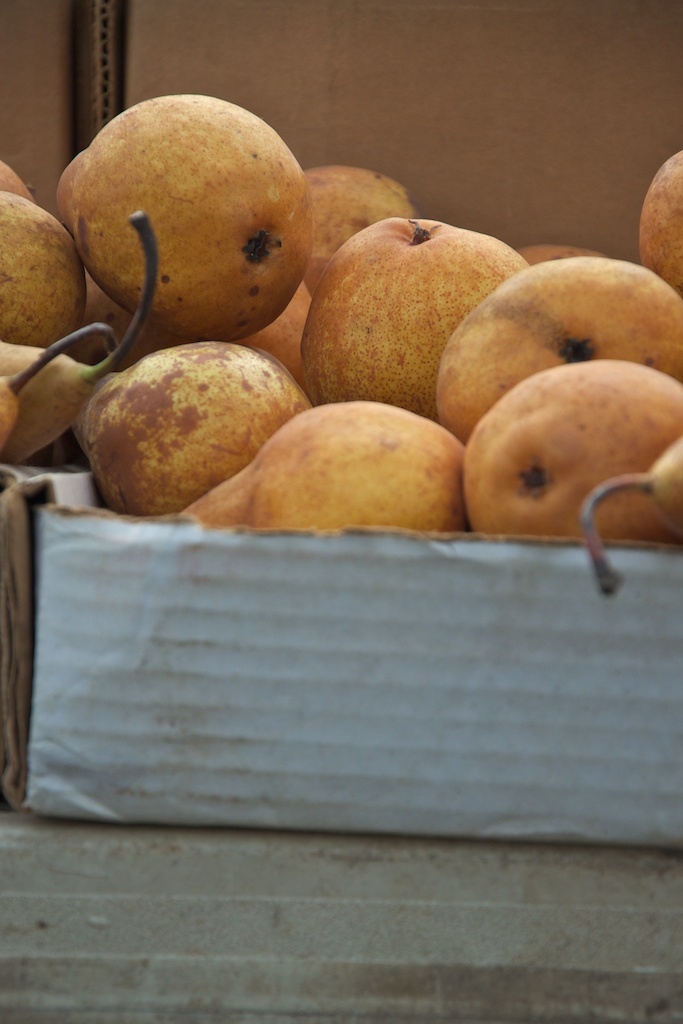 All of my research indicated that Bosc pears grow best in the Northwest climate of the US, in states such as Oregon or Washington.  However, these pears were originally planted and cultivated on the East Coast and many local farms still grow the variety.

The growing season begins around April and concludes with a fall harvest. The bins of harvested, still hard, pears are placed into cold storage to remove orchard heat and reduce the core temperature.

You can find pears of all varieties at the Greenmarket from the middle of the Fall through late Winter, thanks to this storage.  I purchased my pears from Treelicious Orchards.

Historic Images from The Pears of New York

Check back tomorrow for a Bosc Pear recipe I'm excited to share!