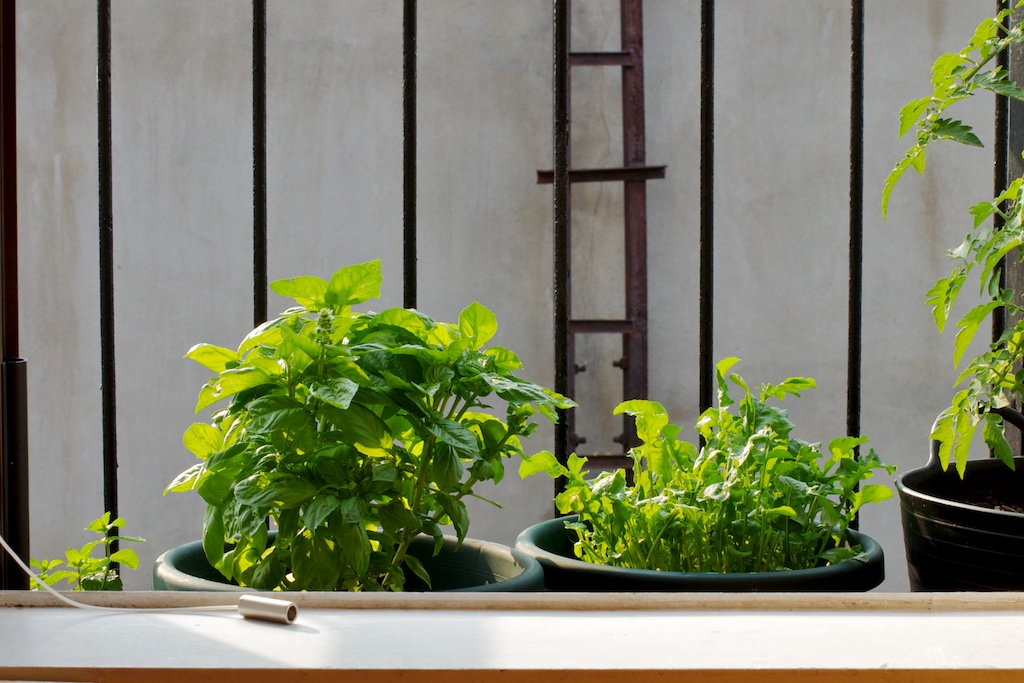 In May, I shared that I was gathering items to start my own fire escape garden. I purchased seeds, ordered seed start kits and a windowsill heating pad, and bought pots to use when the seeds were big enough to transplant. 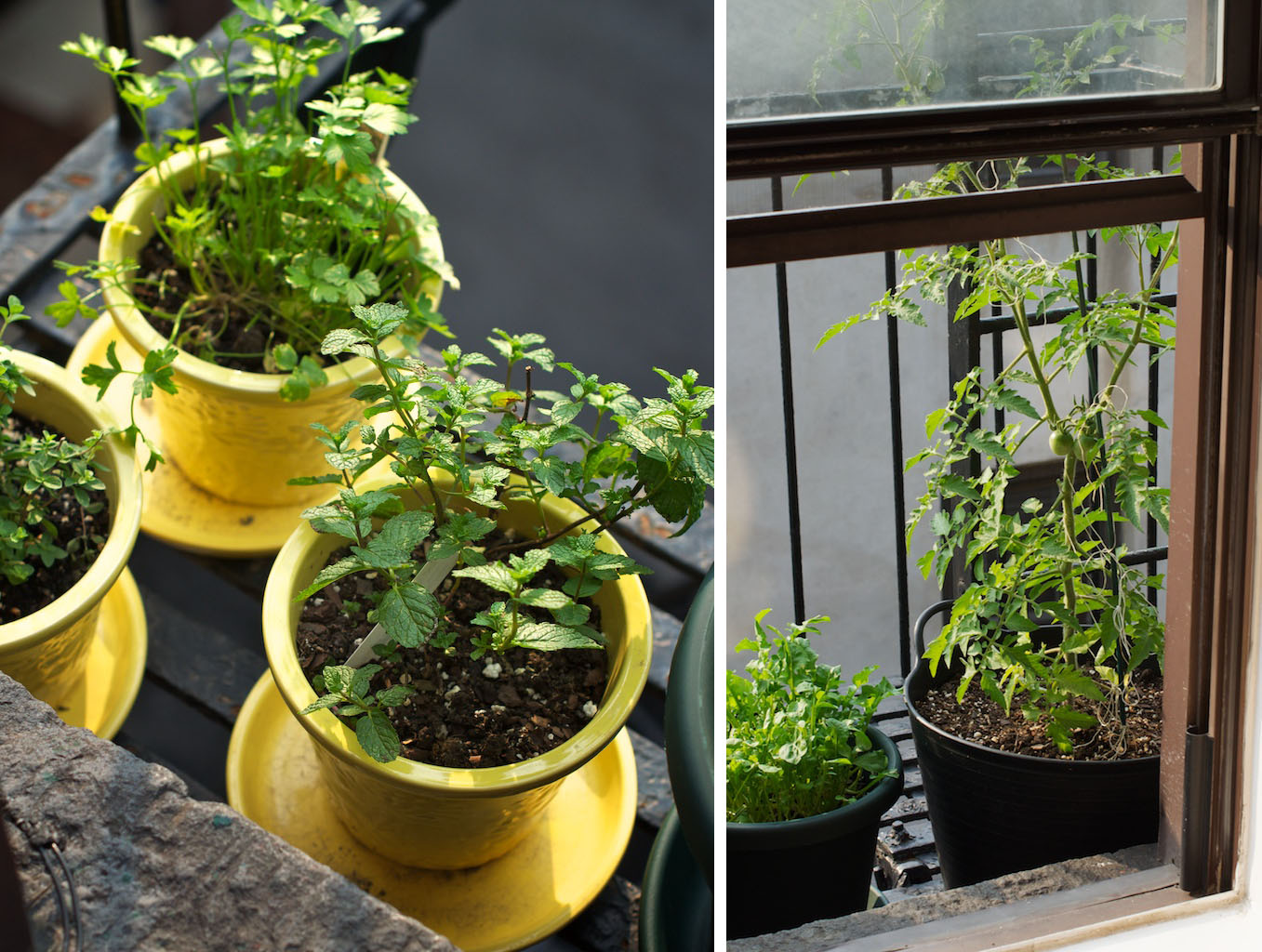 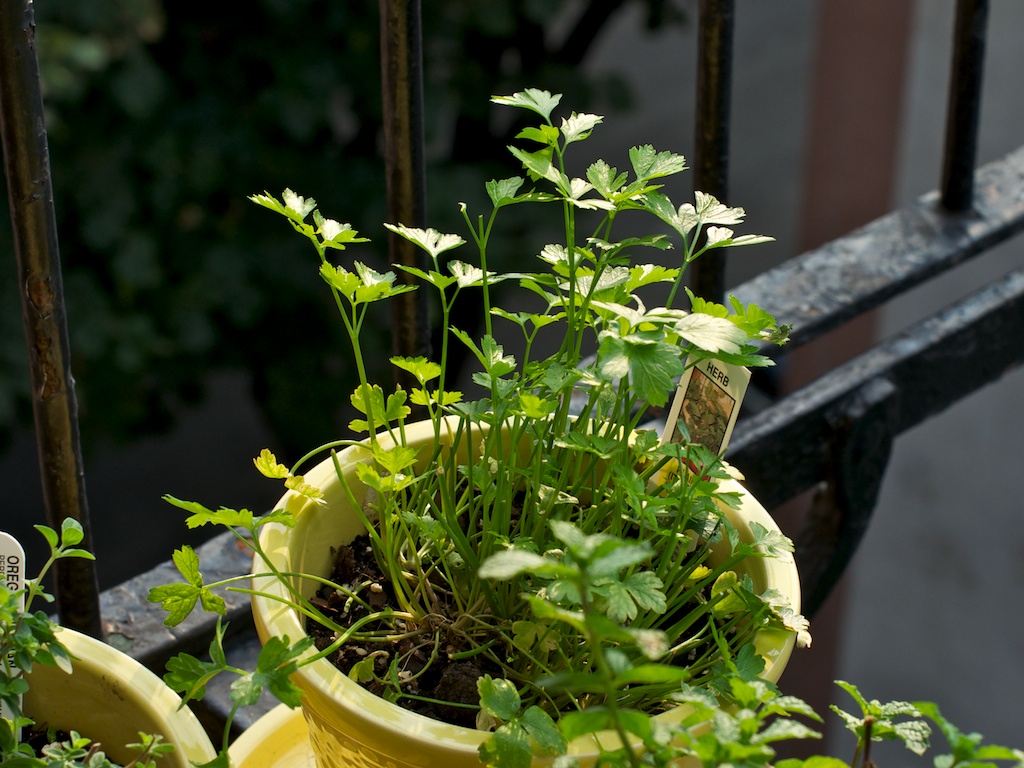 We now have a thriving mini garden, but not in the way I'd anticipated. I started arugula, oregano, sage, and two basil plants from seed. For awhile, all of them sprouted up (with the exception of the sage), their tiny spikes peeking above the small biodegradable cups. As the shoots grew, I began to notice that, despite using tweezers, I'd placed too many seeds in each cup and certain sprouts were strangling each other. Heeding the advice of my brother, I trimmed back all but the healthiest sprouts.  After trimming, both of the basil plants and the oregano seemed healthy and well on their way to greater things. 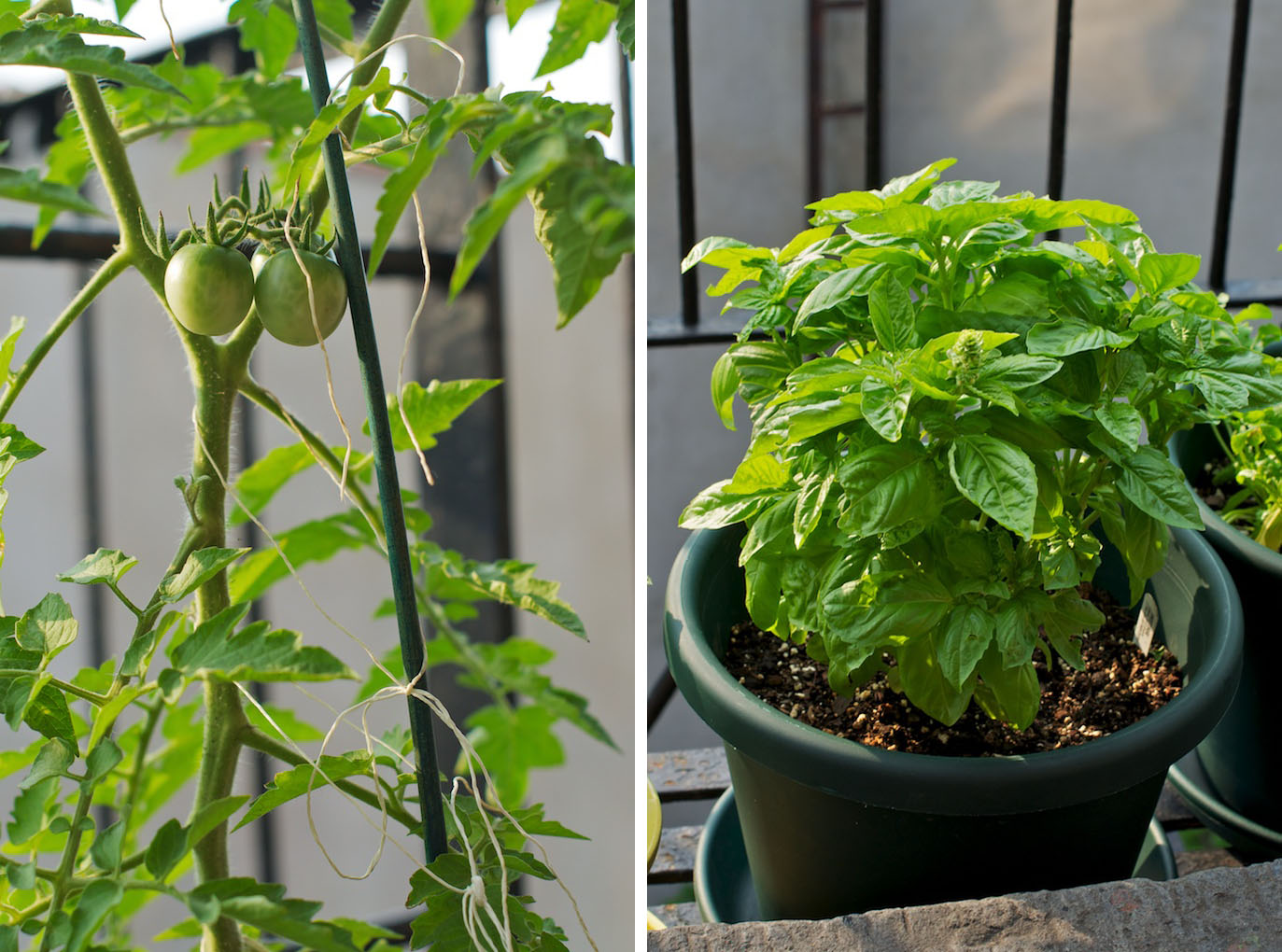 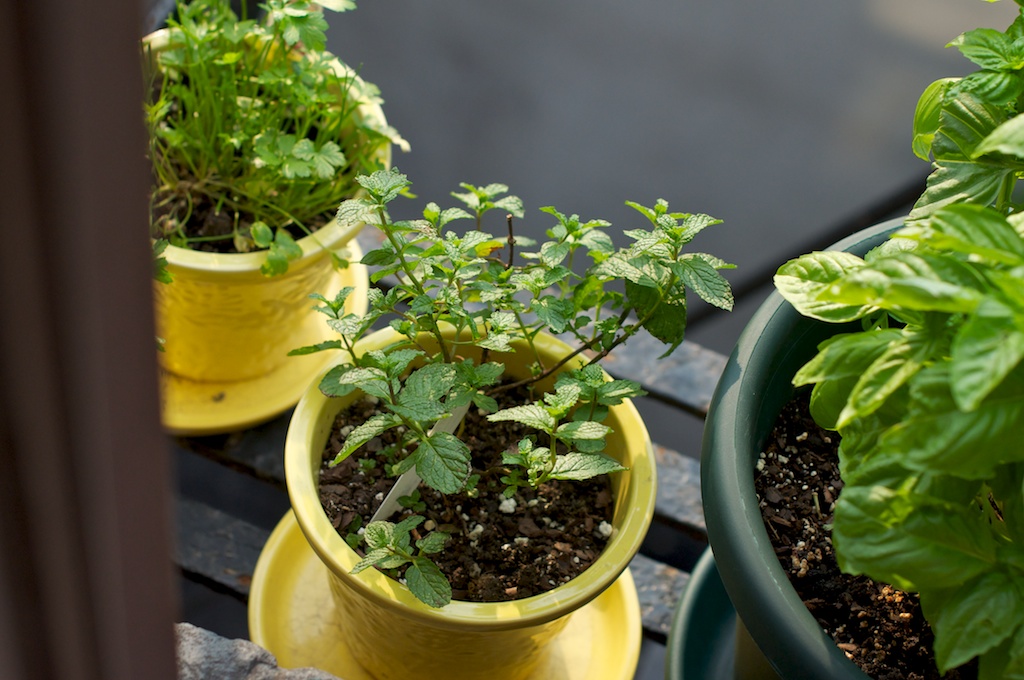 We then went on a short vacation and the sprouts weren't watered (a typical "signals crossed" tale!). We returned three days later to shriveled dead sprouts/plants.  This trip was near the end of June and I had no interest in starting over. Instead, I went to the Grand Army Plaza Greenmarket and bought starter plants from Scarborough Fields and Flowers. After two trips to the market, I returned home with mint, basil, oregano, and parsley. You're also probably noticing a tomato plant in these pictures.  In early June, I'd picked up a starter tomato plant from the Compost for Brooklyn block party and the plant had survived our three day trip in late June. 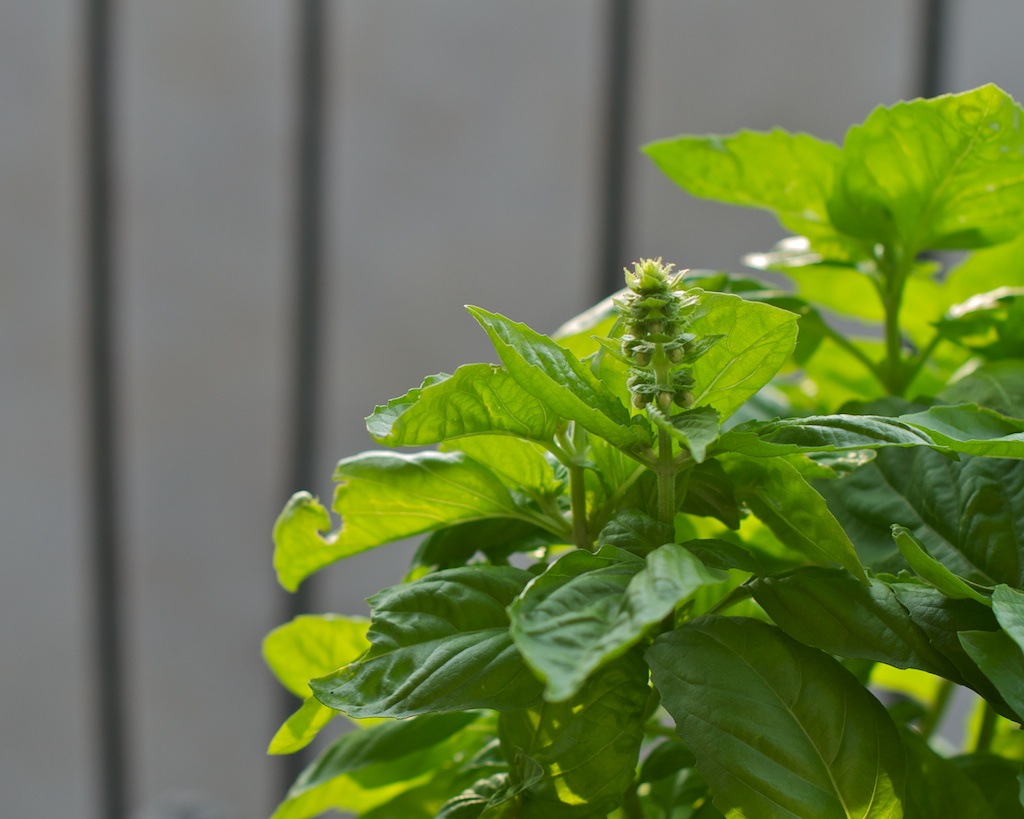 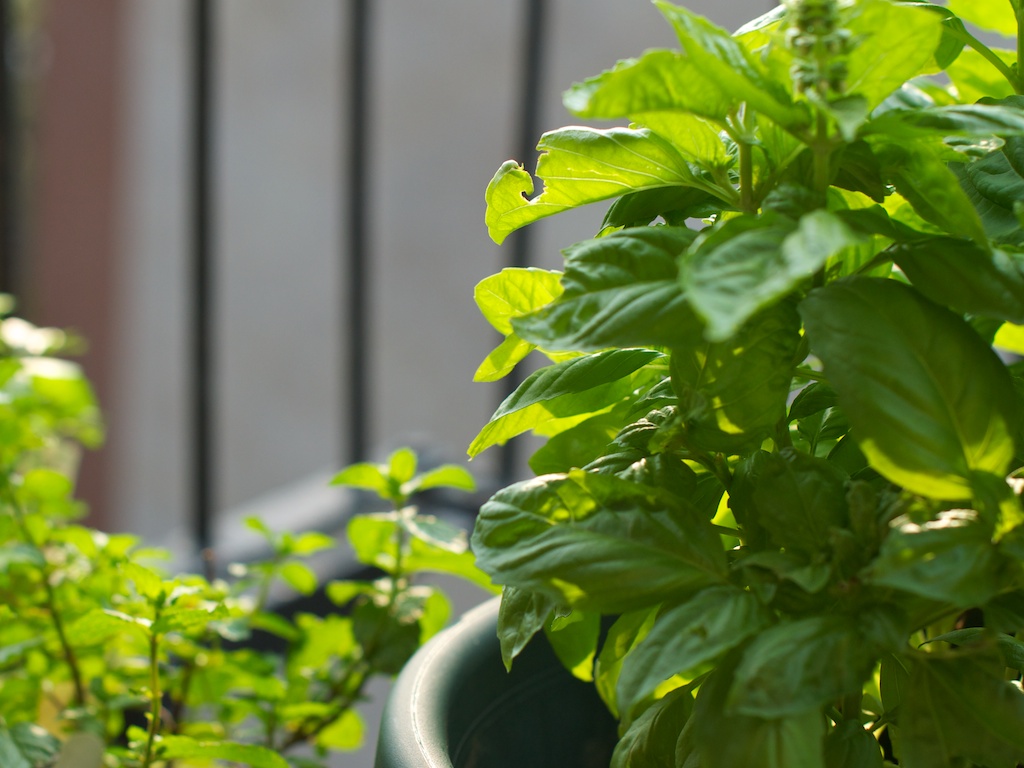 This summer, we've lovingly watered and pruned our herbs, and eagerly watched our tomato plant sprout fruits. While we have yet to enjoy any tomatoes from our own plant, we're closer to eating them (all 11 of them!) by the day. Our fire escape enjoys a healthy dose of sun in the afternoon, encouraging the basil and arugula to thrive. Our oregano has remained steady, giving us enough for recipes, but always leaving me slightly worried that it's one day from drying out. 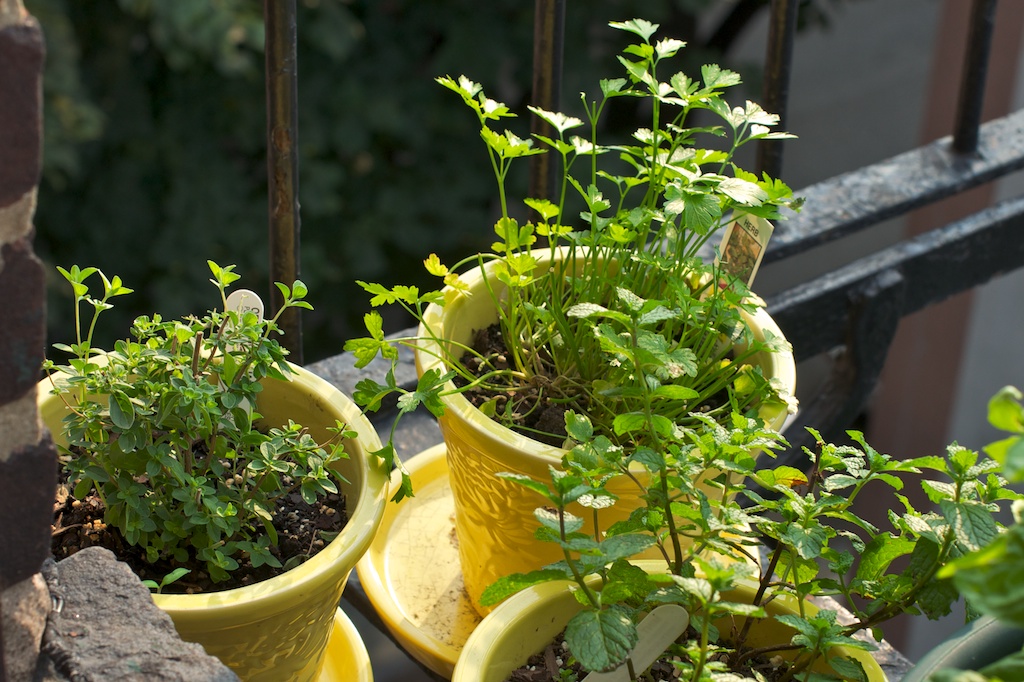 Someday I'll have a garden with soil in the ground instead of pots.  In the meantime, I consistently enjoy leaning out the window, snipping whatever herb we need, and adding it to our meal. Also, my black swan watering can perks me up with every use!