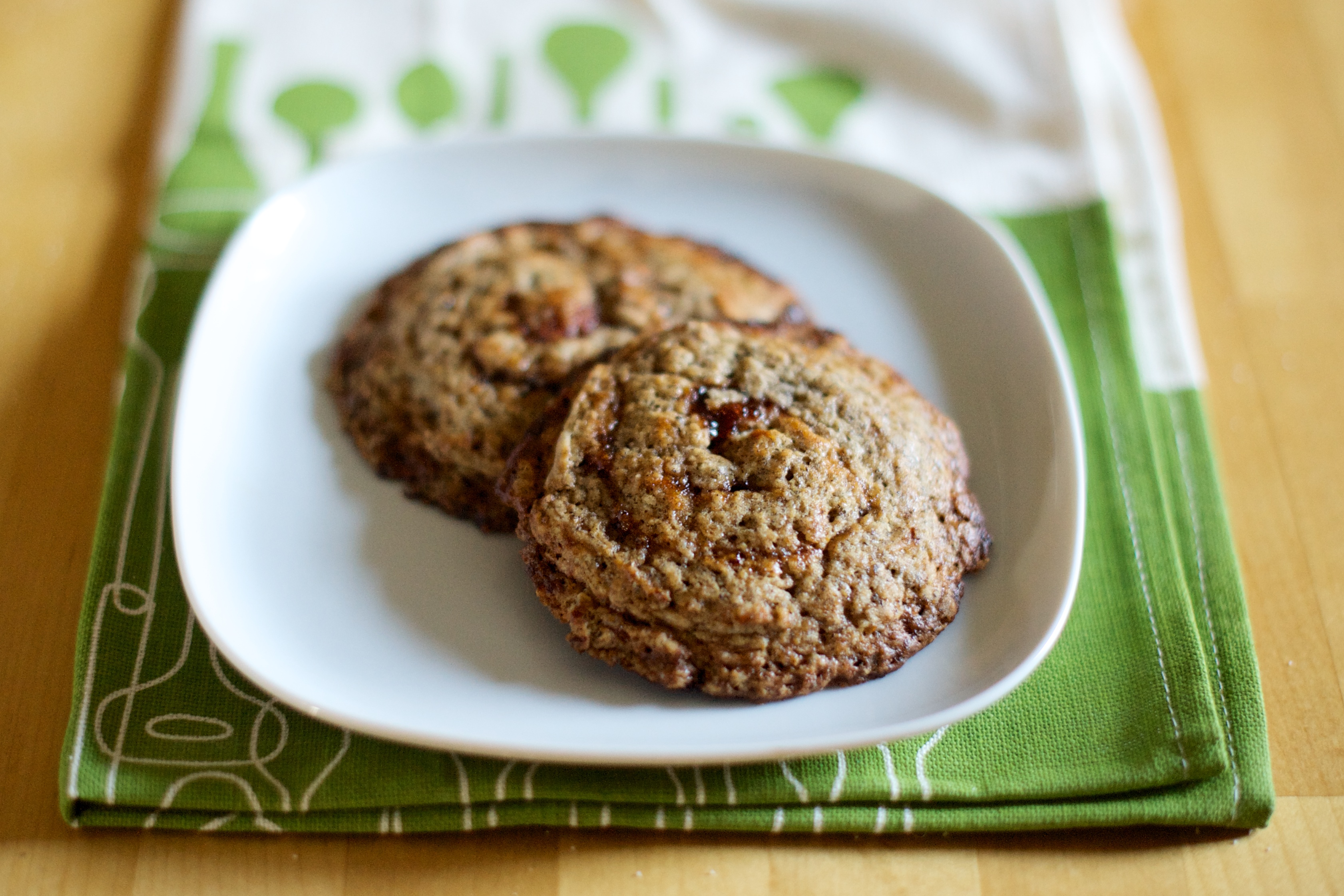 We were once again gifted a box of plums from our neighbors’ plum tree. Because I’m still working my way through a few remaining jars of last year’s plum jam, I put away my canning tongs and approached the three pounds of fruit from a baker’s perspective.

I’ve now baked my way through much of Kim Boyce’s Good to the Grain, but I’ve mostly ignored her buckwheat chapter. Related to rhubarb, not grain, buckwheat produces short plants with green, heart-shaped leaves and tiny white flowers. Buckwheat’s seed-like fruit looks like a triangle with slightly tapered sides. These fruit seeds are harvested, dried, and eaten whole or ground into flour. Farmers and gardeners frequently grow buckwheat as a cover crop to add organic matter to the soil and make phosphorous more accessible to future plants; buckwheat also crowds out weeds and counteracts erosion. 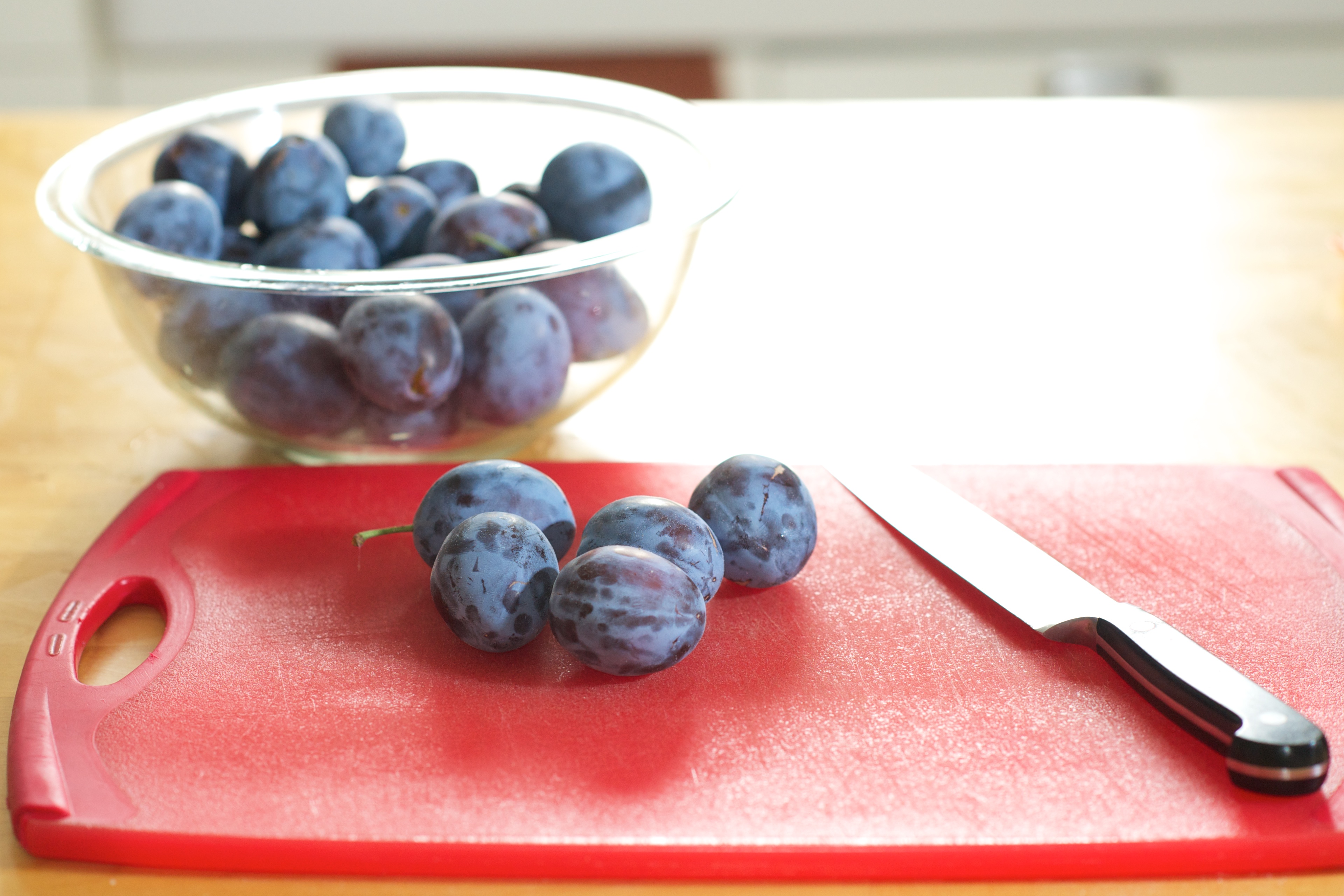 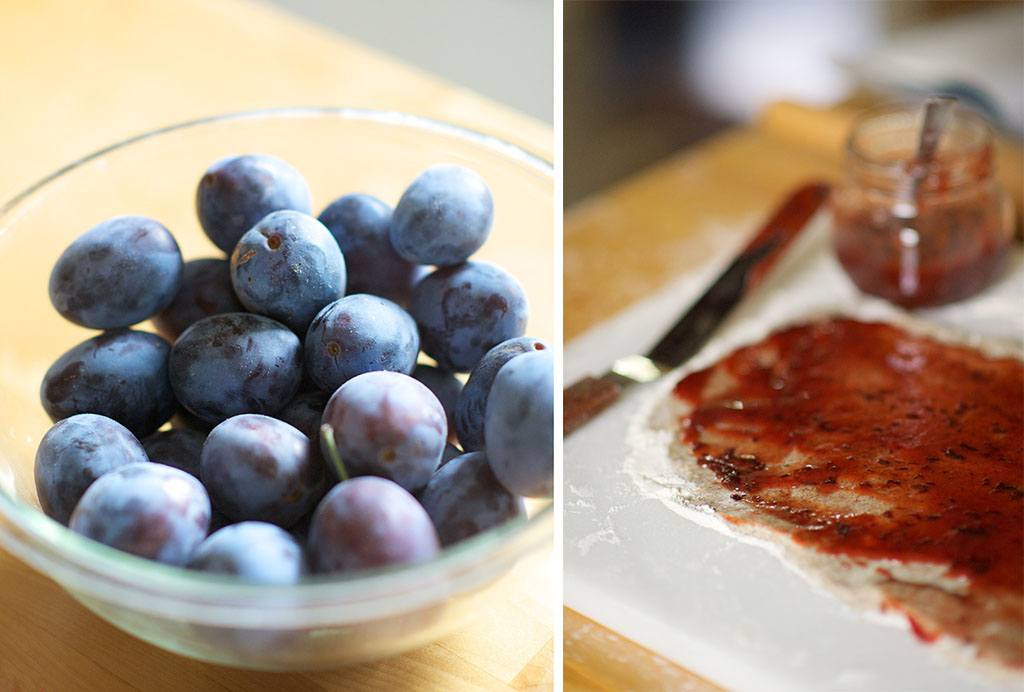 Buckwheat’s nutty flavor evokes feelings of coziness and comfort and inspires thoughts of the harvest, which explains its frequent pairings with brown butter, pears, apples, pumpkins, and figs. While I’ve recreated many of Boyce’s baked goods (in taste, not necessarily visually), I never felt an inclination to tackle the recipe for figgy buckwheat scones, assuming I couldn’t do justice to the flavor or shape of this unique treat. With this recipe, Boyce created a baked good that tastes like a combination between a jelly roll and a fig newton, yet manages to feel nutritious while you’re eating it. She rolls the dough around the fig butter so tightly that the resulting pinwheel only unravels as you near the end of the scone.

Why did I attempt to recreate this when I can literally walk down the street and buy one? One: I had buckwheat flour leftover from weekend pancakes. Two: I had those gifted plums. Plums and buckwheat seem like another fitting early fall pairing, and by using plums instead of figs, I gave myself a mental “out” if the scones neither tasted nor looked like Bakeshop’s. 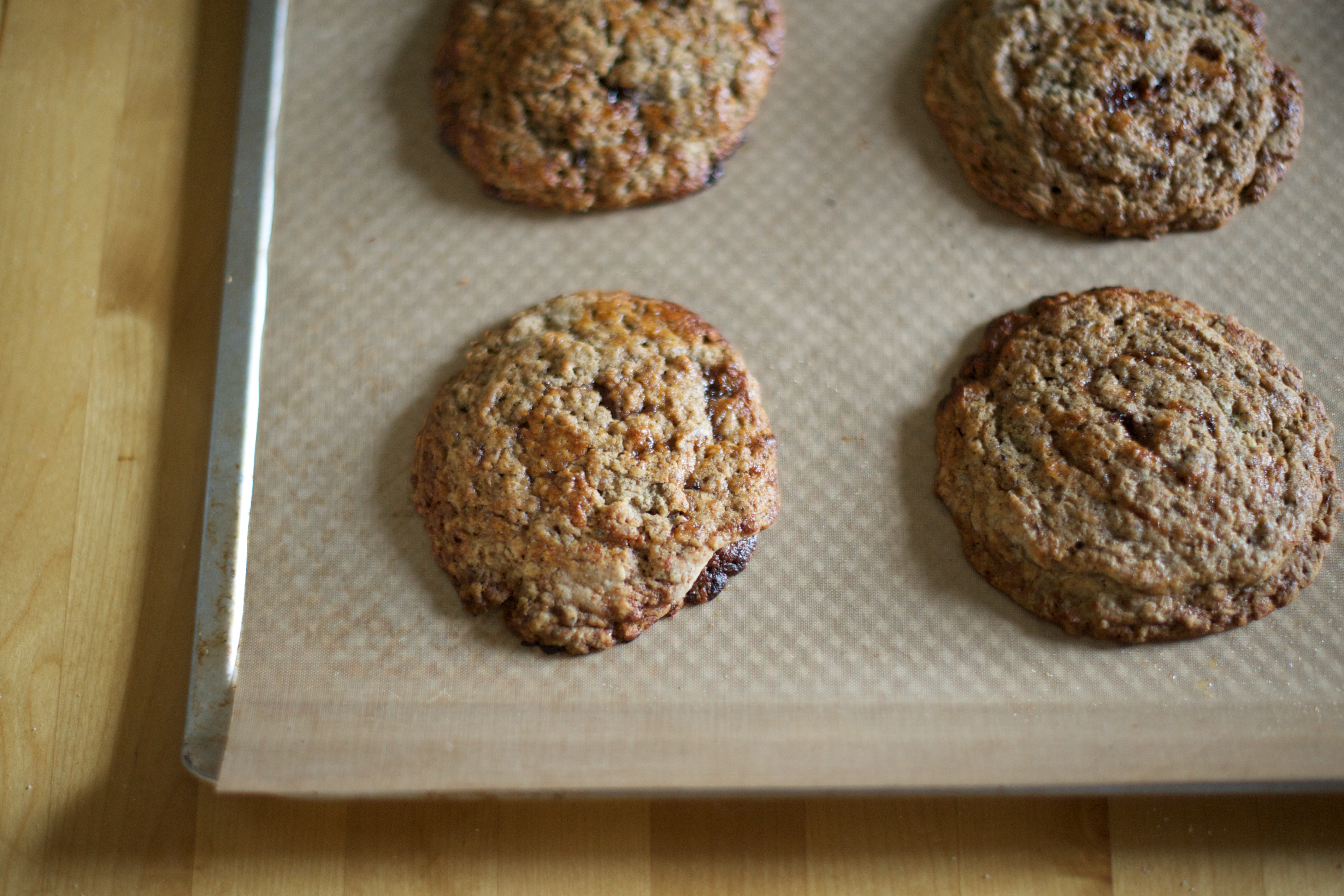 When I visited Terrebonne’s Rainshadow Organic Farm, I saw rows and rows of buckwheat growing, the young plants dotting the landscape an acre in every direction. As I sifted the buckwheat flour with the other dry ingredients, I imagined those plants being transformed into the flour in the bowl before me. Enabled by the butter and heavy cream, the buckwheat flour clung to the all-purpose flour tautly, resulting in a dense mass. I turned the plums into a loose fruit butter by macerating them in sugar, adding cloves and a cinnamon stick, roasting them in a dutch oven for two hours, and then pureeing them with an immersion blender. 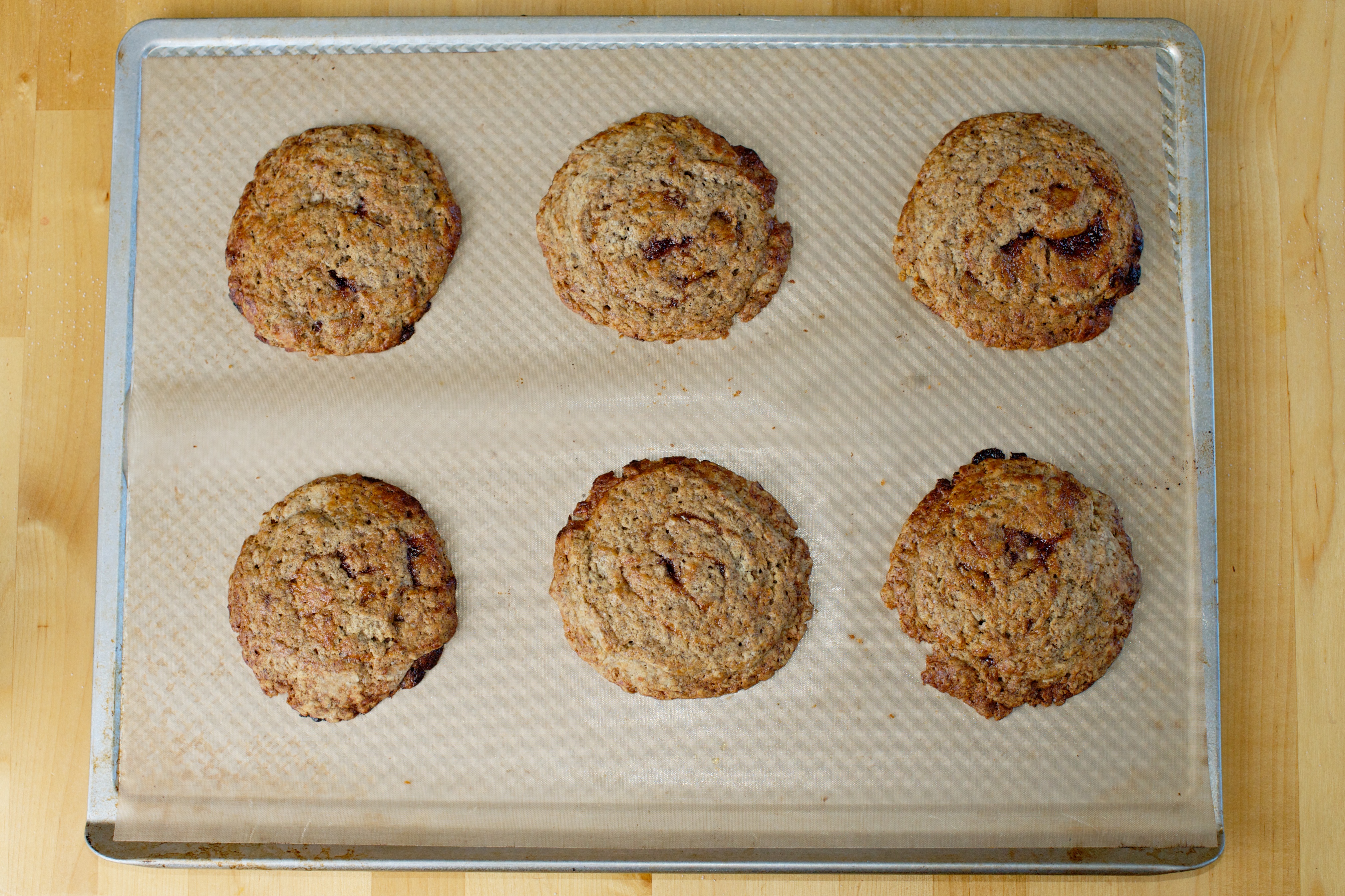 Once the jam-butter had cooled, I rolled out the dough without it sticking to the counter or ripping. But in the time between spreading the jam and rolling it into a tight cylinder – four minutes at most – the dough became overly clingy and wet. I advise to move nimbly between rolling, spreading the jam, and folding the dough into a long tube. I also advise to not bake bread at the same time you’re rolling out the dough (guilty as charged). Once it was jam-filled, cut in half, and hastily put into the fridge to chill, the dough solidified, and by the time I was ready to cut it into discs for baking, it was malleable and yielded cleanly to the pastry scraper.

If you lined up these plum butter buckwheat scones next to Bakeshop’s figgy buckwheat scones, they look related by marriage instead of genetics. The plum scones spread out instead of up, and I wasn’t able to roll the log as tightly as necessary when the dough began sticking. But in terms of taste, the familiar mix of buckwheat and rich fruit is nearly identical, with the plum butter adding a few more notes of sweetness and spice than the fig butter does. Mission accomplished: I was able to sneakily recreate Bakeshop’s comforting buckwheat scones in a way that didn’t invite comparison, yet still satisfies my craving for a rustic fall flavor combination. 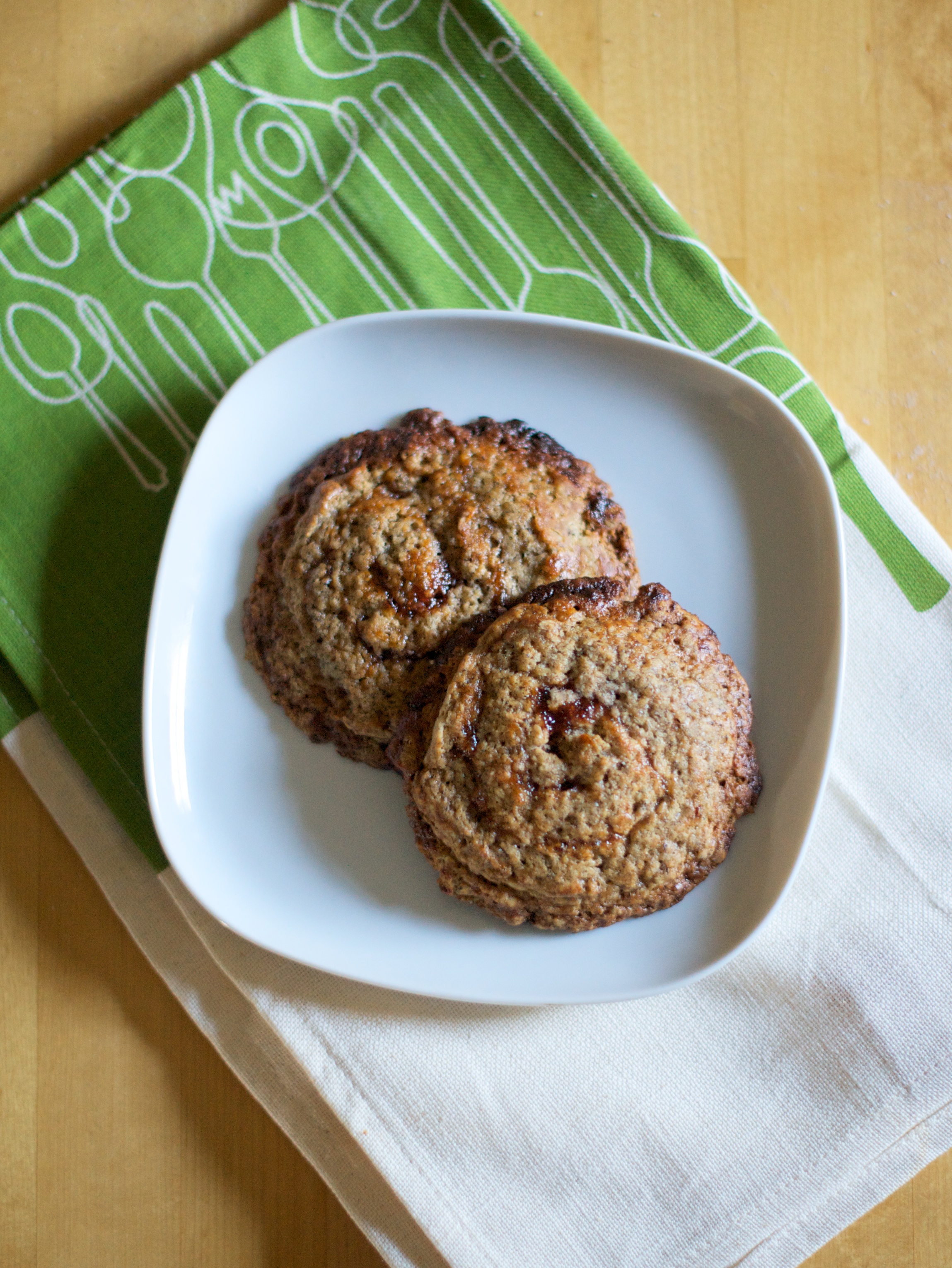 Recipe Adapted From: Good to the Grain