Plums + Buckwheat – We were once again gifted a box of plums from our neighbors’ plum tree.

My Maui Food Memory – Along with visiting the Haleakala Crater and driving The Road to Hana, I planned another must-do for our trip to Maui: eating as much banana bread as possible.

Roasted Chickpeas – Before we moved to Portland, we stayed at The Ace Hotel three times.

Seeking Familiarity – To ease the transition, I've tried to replicate certain arrangements we had in our last apartment: our ubiquitous eiffel tower print is now hung above the television, per usual. 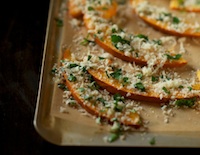 Pumpkin Wedges – These pumpkin wedges capitalize on the remaining whole pumpkins you can still snag at the farmers' market or grocery store. 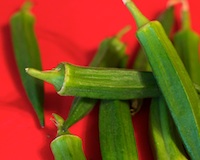 Inspiration from North Carolina – This weekend, we turned these plump sap green okra into a delicately fried appetizer, topped with homemade tomato jam.

Pistachio Biscotti – It shouldn’t be a secret that I have a fondness for pistachios.

Pistachio Obsessed – My love for pistachios is practically predestined.

Earl Grey Biscotti – I love the idea of cooking with tea and, in fact, own a different tea cookbook, Tea Cuisine.