Until moving to Brooklyn, I was unaware of the relative insanity that surrounds the start of ramp season.  For the past several weeks, ramps have been making appearances in restaurants like Lupa Osteria and Rosewater, have had articles dedicated to them in Time, and inspired prominent food writers like Robert Sietsema to make suggestions for how to cook them.

Ramps are wild leeks and the entire plant (bulb, stem, and leaves) is edible.  They’re also one of the most pungent things I’ve ever smelled. 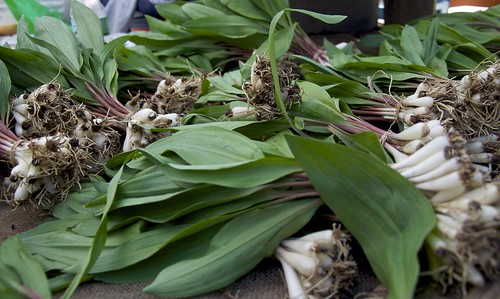 After all of the press, I was itching to get my hands on some of my own.  This past weekend at the Grand Army Plaza Greenmarket, Wilklow Orchards was the line to be in:  ramps were $16 a pound (!) and selling quickly.  I’m not one to turn down trying a new food, especially one that has inspired a mini foodie hysteria.

After preparing our dinner with the fresh ramps, I’ve come to the following conclusions.

To me, ramps’ significance stems from the fact that they are the first spring green that makes an appearance at the market, after many, many months of root vegetables and apples.  Quite frankly, that’s reason enough for some mild hysteria.  Their ‘of the earth’ aroma and tatse is a preview of things to come: squash, cucumbers, peas, okra.  While I appreciate the importance of the ramps, in truth, I didn’t enjoy their taste as much as I savored last week’s pea shoots. 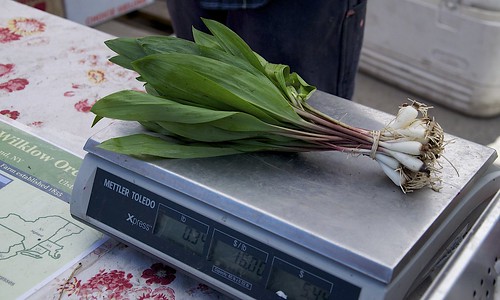 In searching for a recipe, our goal was to showcase the ramps.  Many blogs and recipe sites mentioned Mario Batali’s Spaghetti with Ramps.  The recipe has 4 ingredients: pasta, ramps, red pepper flakes, and breadcrumbs, with a touch of olive oil and parmesan.  We loved the richness of the sauteed ramp bulbs but found the red pepper flakes to be overwhelming.  The dish is simple, but as a word of warning, go light on the red pepper flakes—the ramps are flavorful enough! 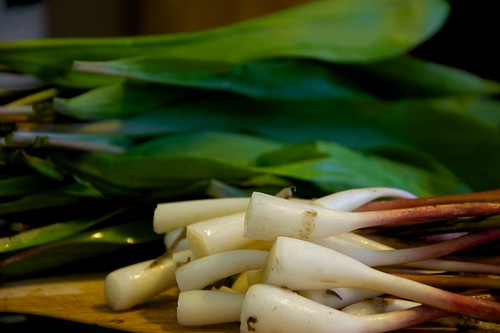 Bring 6 quarts of water to a boil and add 2 tablespoons of salt. Add the spaghetti to the pot and cook according to the package direction, until tender but still al dente.

Heat olive oil in a 12-14 inch sauté pan over medium high heat. Separate ramps by the white root ends and the leafy green top. Add root ends to the pan and sauté until tender.

Add salt and chili flakes. At the very end, add the greens and sauté until wilted. Drain pasta and add it to the sauté pan. Toss gently to coat the pasta with the sauce. 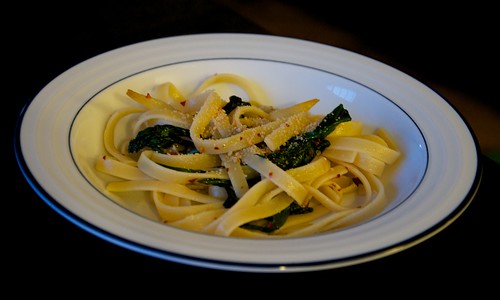