I was unaware of exactly how delicious and fleeting pea shoots were until they became a surprise addition in our Garden of Eve CSA share this past weekend.  In fact, the farmers at Garden of Eve were so inundated with pea shoots that we were offered 2-3 free extra bags, if wanted them.  We gladly took an additional bag and came home to learn more about pea shoots and how to cook them. 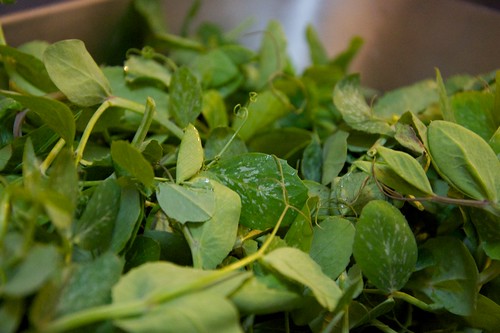 Pea shoots are so popular in Britain that they have their own website dedicated to them, full of lovely pictures, recipes (Trio of Pea Shoot Canapes, anyone?), and nutritional information.

Pea shoots are the leaves/tendrils of pea plants.  Their season is short because their ideal growing temperature is around 65 degrees.  They’re quite fragile and so we made sure to use them as quickly as possible.  When Justin took his first bite, he reported that they taste like ‘spring’.  They’re sweet, earthy, and full of flavor:  a fresh spring green.  They’re also packed with carotenes, so there’s no reason not to eat as many as possible.

These greens have been popular in Asian cooking for years. They also pop up in farmers markets around the Pacific Northwest, due to its rainy, mild climate.  Pea shoots are tender and the intensity of their flavor means that little or no cooking is necessary to fully enjoy them. 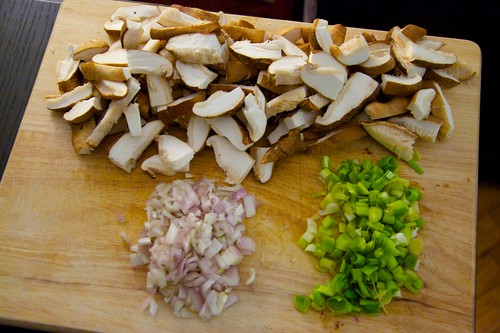 Our CSA box also contained leeks, so we did some searching and found ‘Soba with Pea Shoots, Shiitake Mushrooms, and Leeks’.  Preparation is minimal and the pea shoots are the star of the show.  Browse your farmers’ market as soon as possible to pick up some of your own! 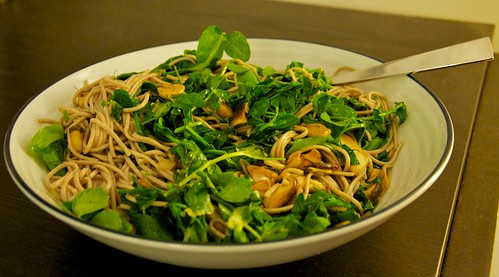 2 tablespoons soy sauce, or to taste

2 teaspoons rice vinegar, or to taste

In a large skillet cook leeks in oil over moderately low heat, stirring, until softened, about 10 minutes.

In a kettle of salted boiling water cook noodles 5 minutes or according to package directions. Put pea shoots in a colander and drain cooked noodles over shoots to wilt them. Rinse mixture in cold water and drain well.

In a bowl toss noodles with pea shoots and stir in cooked vegetables. Season mixture with salt and pepper and serve at room temperature.